Bashan: Worth the drive 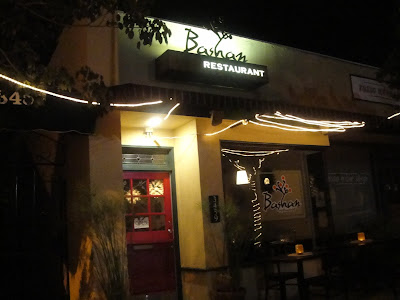 I've heard many good things about Bashan but it was always further down my list because it is located in Glendale. I'm not going to lie to you, it's pretty darn far. 14 miles from my work in Hollywood, and about 30 miles back home to the Westside. So yes, I won't be having the wine pairing with dinner. The restaurant name sounds Middle Eastern but in fact, the cuisine is French-American. They currently offer a special prix fixe menu Tuesday - Thursday $40 for 3 courses, and also a 5 or 7 course tasting menu for $65 and $85 respectively. Appetizers are priced in the teens and entrees are in the twenties. 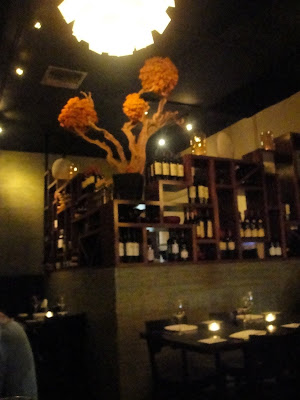 The restaurant is located next to a wine shop. The space is small, intimate, homey with an eclectic modern decor. 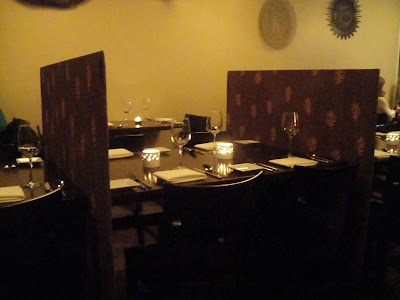 There are intimate partitioned tables in the center of the restaurant. Don't know why but somehow feels like you are sitting Business Class on British Airways.

Bashan is run by husband and wife team. Chef Nadav Bashan was the executive chef at Michael's, then moved over as sous chef at Providence. Both of which are excellent restaurants. His wife Romy runs the front of the house. I was meeting my friend LB who had just returned from her two week vacation to Spain and Portugal, and I was 15 minutes late because of bumper to bumper traffic and I got lost! See, I don't do so well outside of my Westside bubble.

We were torn between the 3 course or the 5 course meal. Both looked great. After reading some reviews online, it seems that their pork belly, sweet breads and dry aged steak were highly recommended. We finally decided on the 5 course tasting since this was our first time at Bashan and it would allow us to sample most of their dishes. They are pretty accommodating as I listed out all the food that I don't like (cheese, avocado... I even filtered my list down a bit). 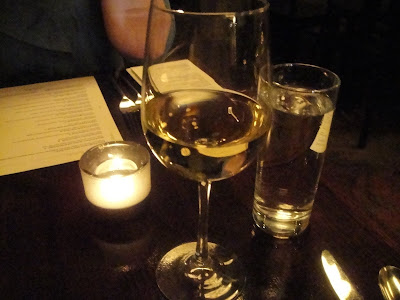 We decided not to go with the wine pairing because of our 30 mile drive back, but ultimately ended up getting 3 glasses each. Very affordable at about $6-7 per glass! 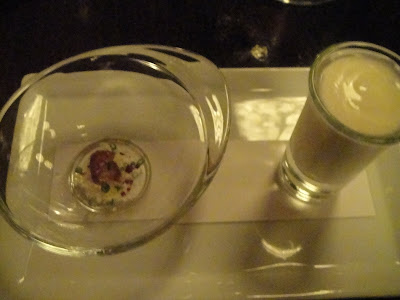 Amuse bouche
Shot of cauliflower puree, shaved almond, dates, chive and korean chili flake
You had to pour the puree from the shot glass into the bowl of dried ingredients. I liked the sweetness of the date against the chili flakes; I thought it was a good combination. The cauliflower puree was rich and creamy which was perfect for a chilly night. It would have been better if the puree had been a little warmer, but otherwise, this definitely woke up my palate. 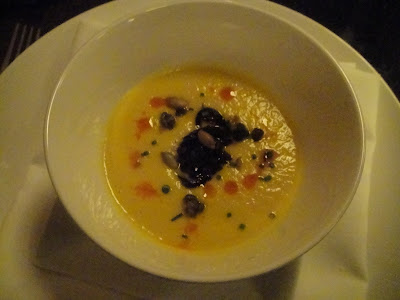 Surprise! Amuse bouche #2, for diners who order the tasting menu.
Puree of pumpkin soup, red onion compote, smoked paprika oil, capers, toasted pumpkin seeds
This dish was exactly what LB had wanted from the appetizer choice of the 3 course menu so we were glad that we got to taste this after all. It was a good sized portion for an amuse bouche and smaller than the regular appetizer portion so we got a flavor of it without filling up on it. The soup was sweet and was served at a warm temperature. The paprika lent that distinct smokey flavor and I liked the crunch from the pumpkin seeds. The capers seemed to be deep fried as well, which was a nice touch. And the red onion compote added another layer of sweetness to the soup. A very good dish that was comforting and really hit the spot. And the best thing was we hadn't even started our first course! 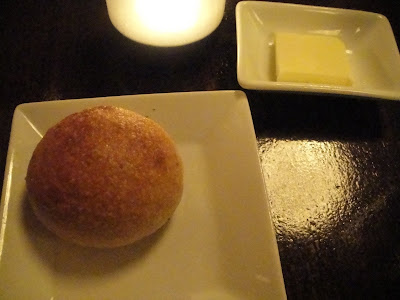 Our waitress apologized when the bread had not come out- we didn't even notice as we were busy reminiscing on our two amuse bouches. When the bread did arrive, it was freshly baked and came out hot. It was a delicious sourdough roll. Simple and fresh.

So we had asked if both of us would be getting the same dishes for each course. Some restaurants like Sona and Hatfields mix it up a bit so that the table would end up with a variety of dishes. Our waitress mentioned that the table would typically get the same dishes. However when the 1st course came out, she mentioned that they made an exception and that we would be getting a few different dishes between the two of us for select courses. I reckon it was because I am so darn picky so they didn't want to penalize my poor friend. I found that very flexible and accommodating of them. 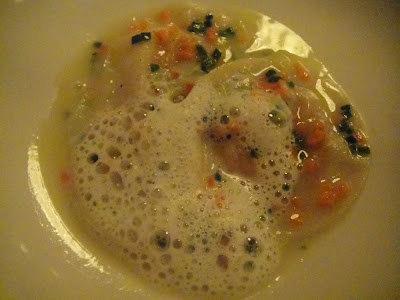 #1. Tahitian squash and roasted garlic ravioli with butter sauce, truffle foam
We both got the same 1st course which was just as well because I wouldn't have wanted to share a bit of this. It was simple and well seasoned. You could smell the truffle aroma, yet it did not overpower the dish when you ate it. The broth was salty and worked well with the delicate raviolis. The micro mire poix gave a gorgeous vibrant color to the dish. 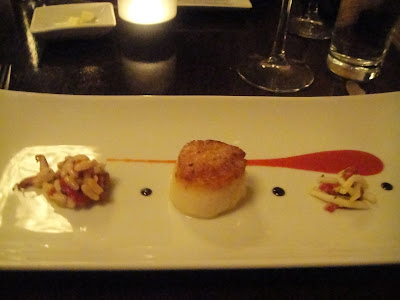 #2a Scallops with rice beans, squid, bacon, sherry vinegar
The scallop was cooked perfectly with a nice sear on top. The rice beans did not have much flavor but I thought it worked really well with the rest of the dish and added a texture to the dish. 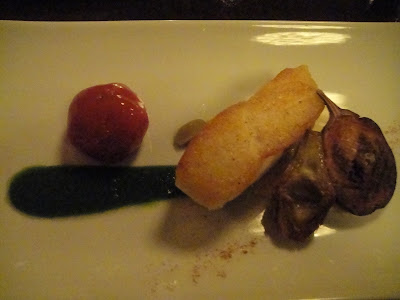 #2b Alaskian halibut, roasted eggplant, hummus, baby artichoke, olive, peppadew pepper stuffed with eggplant
The stuffed eggplant pepper was interesting and delicious; it was spicy and sweet at the same time. The halibut itself was OK. I liked the crispy skin but the meat was a tad bit overcooked. The sauce also wasn't anything special. It wasn't bad, but it didn't have the memorable flavors like the prior dishes. 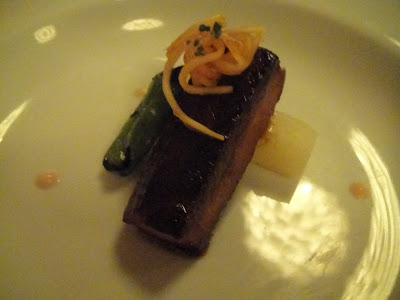 #3a Braised Pork belly with daikon, shishito pepper
I was excited when our waitress placed this in front of me because it was the one dish on the dinner menu that I really was hoping to try. The shishito pepper were really spicy and the heat lingered in your mouth for a while. The daikon was prepared two ways: braised and pickled. The top of the pork belly wasn't as crispy as I had hoped but the meat underneath was very tender and fatty. Yum! I also liked the sauce/marinade which tasted like sweet maple. Overall, very delicious. 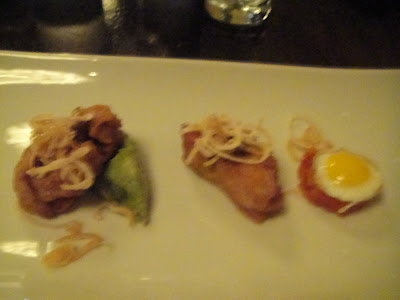 #3b Crispy Veal Sweetbreads with guacamole, crispy shallots, tomato compote and quail egg
Do they have ESP? How did they know that I wanted the pork belly and LB wanted the sweetbreads?!? The sweetbreads were cooked perfectly; they were tender not chalky, served warm and you could tell that they were fresh. The breading was lovely: those little morsels were fried crispy and were not soggy. The quail egg was also a nice touch. I even liked the crispy shallots which were thin strands of oily goodness. The only comment we had was that the guacamole did not seem salted and it had too much citrus. 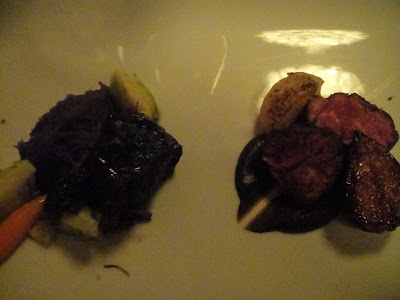 #4 Beef two ways
Hangar steak with house made mole, cippolini onions and figs
Glad to still see figs on the menu. They were sweet and was a nice bite with the saltiness of the beef. The beef was a good cut of meat and was perfectly cooked- red and buttery. It had a thin layer of salt and pepper on the edges.

Short ribs with chimichurri
The short ribs were to die for. They were bursting with flavor and melt in your mouth. Everything on the plate was amazing. The brussel sprouts were cooked well and seasoned with garlic. The Okinawan (or purple) yam mash was sweet, starchy and buttery. This was one of my favorite dishes but definitely a heavy one, and I was glad that we only got a small portion of it.

I didn't see the duet of beef on the dinner menu so I was glad we got this because it was great to sample the two versions. If we had stuck to the three course menu, we would not have had the opportunity to try this dish.

Last but not least, dessert. 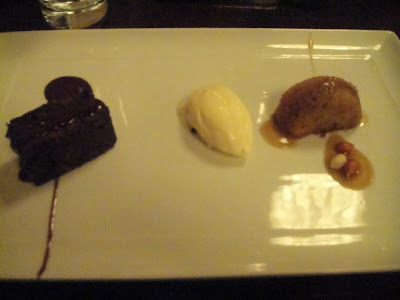 #5 Duet of chocolate brioche bread pudding and peanut butter banana sticky toffee cake with toffee sauce, house roasted peanuts.
My favorite was the toffee cake. I loved the crispy edges which were sweet and crunchy. I even liked the house roasted peanuts that were marinating in the toffee sauce. The bread pudding was LB's favorite, well anything chocolate is. It was very rich, decadent and sweet. The duet was served with vanilla ice cream. This was one very rich and satisfying dessert.

The service was great, from the warm hello when you first walk in, to the check-ins to see if we needed any more wine or water, and finally for the chef's flexibility with the tasting courses. The food was also paced well. We never had to wait long in between courses.

Total cost was about $110 per person, including tax and tip for the 5 courses + 3 glasses of wine each. Honestly, I have nothing bad to say about this meal. The food was simple but bursting with flavors. The dishes were well executed and the presentation was lovely. I had a lot of favorite dishes but perhaps my least favorite was the trout. And two amuse bouches? What a pleasant surprise, especially since both were delicious and I wanted to lick off every last drop. The tasting menu is the way to go if it's your first time there because you'll get a flavor of most of the dishes.

OK I've changed my mind, it's not TOO far. Yes it took me 45 minute to get there from work, but it only took me 20 minutes to get home. Just gas up your car and pop some tunes on your iPod and you'll be set.

read all about this last year on Chowhound. Never made it... Good to see they're still rockin'

I know, I had been putting it off for a while so I'm glad I made it out because the soup and short ribs were heavenly! You should add it to your list :)

Glad to see you enjoyed your Bashan experience. I experienced a similar tasting menu recently. The pork belly and short rib were amazing. Bashan gets my vote for best restaurant in NELA.

Hi Joshua. Yes I was very impressed with Bashan. after the horrific traffic, I told my friend we should order the tasting because "who knows when we'll be back!". But after that amazing meal, I'd be back sooner than later.