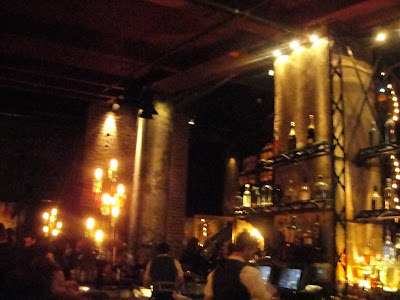 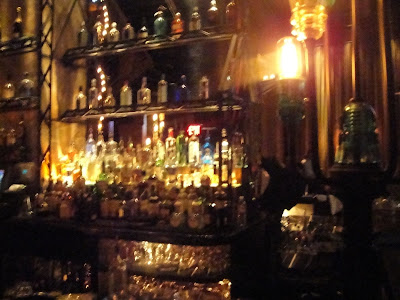 After a satisfying dinner at Bottega Louie, we headed over to Edison bar for the drinking portion of our Downtown LA field trip. Edison has been on the list for a while. I've been meaning to check out circus troop Lucent Dossier, who unfortunately are no longer at the Edison and instead are performing at H.Wood in Hollywood. However Edison still has other events such as Cabaret and Burlesque shows. The lounge is located in an old power plant. The top floor entrance is the smoking area and everything else is located in the basement. The interior comprises of exposed brick walls, art decco design, lush couches, high ceilings, two bars and plenty of nooks and corners. The space used to be a boiler room and the feel is reminiscent of the old, glamorous flapper era. They enforce a strict dress code so it was nice to see the boys dress up for a change! 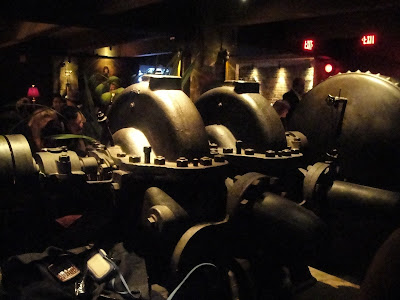 There are old metal structures all around and we sat right by this generator. Most of the seating except for the bar is reservation only. But it's only $25 F&B per person in order to reserve a spot. That's easily done, since it only means about 2 drinks each. They serve fancy, hand crafted cocktails and one of their attractions is the winged absinthe fairy who wheels her cart around the premises, trying to convince already inebriated patrons to drink some of that vile tasting absinthe. A couple in our group fell prey.

I liked it at the Edison. It's a low key yet polished scene. The atmosphere is unique and you feel transported into another world.

When we left the lounge at close to 1am, we were craving a post drinking bite and were having difficulty trying to find something that was open at 1am. We decided to head over to Roscoe's Chicken and Waffles because it was open until 2am and was on the way home. I was stoked because I have never had Roscoe's before. I was just never really tempted to check it out. Growing up, my mom would take us to Pioneer for fried chicken. And when I was older, somehow KFC did the trick for me. 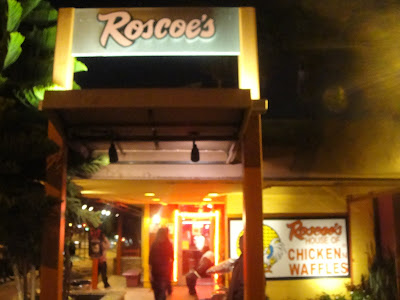 The original outpost is in Hollywood but we went to the one on La Brea/Pico instead, which was just off the 10. It actually looked rather updated and dinerish. Somehow I was expecting something smaller, darker and self service. 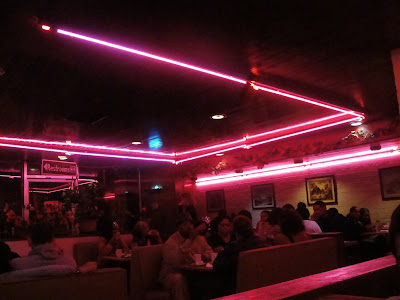 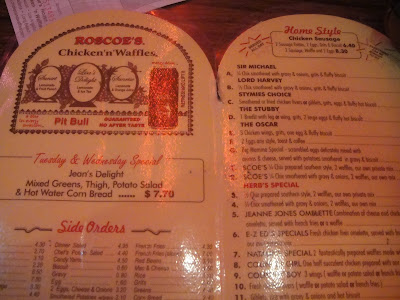 The menu includes their famous Chicken and Waffles, but also other combinations including liver, giblets, eggs and sausages. 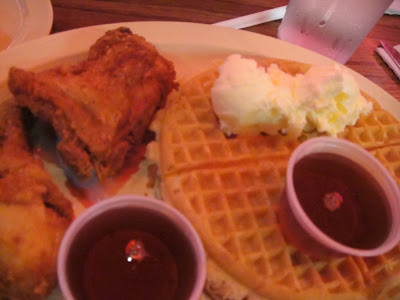 1/4 chicken with waffles
I liked the chicken; juicy, tender dark meat. It was perfectly seasoned and fried. The skin was crispy and even though it's deep fried, it didn't seem painfully greasy. Apparently the best way to eat the chicken is to drizzle some maple syrup on it. I didn't really care for the waffle because it was rather soft and soggy; I like mine crispy. 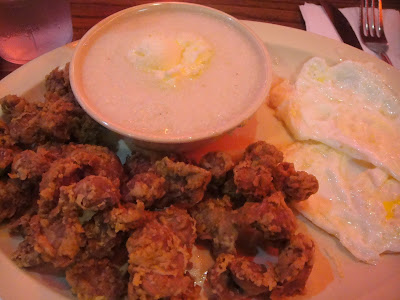 Giblets with biscuit, eggs with gravy, side of grits
Yes, I didn't get the chicken but I did have a bite of it. The giblets were a large plate of fried goodness and I had the whole thing to myself because no one was going to even go near it. I just love the chewiness of the gizzards. Honestly, it tasted good but I can see why most shun it due to its texture. The gravy was thick and salty, and I poured a bit over the fried pieces. I suppose I could have ordered it "smothered" instead of "on the side", but I think that would have been an overkill. The grits unfortunately were bland and were nothing special. I remembered the first (and best) time I had grits was with my adorable Southern friend Whitney when she brought me back with her to South Carolina for Independence Day. The grits as I recall were creamy, buttery and flavorful. As such, the bar that I set for grits is pretty high. I think this version needed some seasoning. It tasted like watered down oatmeal. 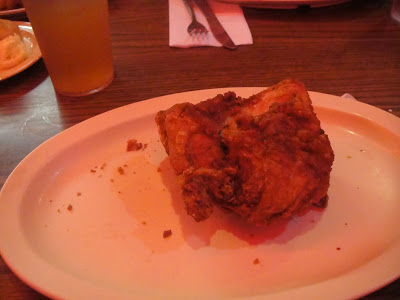 An order of chicken breast. BORING. Funnily enough, the sole boy at the table ordered this while the two of us girls ordered huge plates of fried food. You can tell who the fun ones are in the crowd ;-)

Service was good and our waiter was very patient when I couldn't make up my mind between the chicken or giblets. The chicken was good but I didn't think it was vastly different from other fried chicken that I've had. I do have to give the fried giblets the thumbs up because I rarely see that on a menu. I'm glad I finally got to try this since Roscoe's is an LA establishment, although I wish it hadn't been at 1am. I was still full when I woke up the next morning.

i tried my darndest to swear off roscoe...failed. for fried chix, it's not too greasy so i like. good thing i'm full from dinner or i would be hungry again after reading your post.

btw, thanks for stopping by my blog.

I know A LOT of people LOVE this place. I've eaten at both the Hollywood and Pico locations, and didn't care for either, to put it politely. That being said, the original in Hollywood was the lesser of the two evils in my book. They're only 15 minutes away from each other, so if you have the time, make the drive...