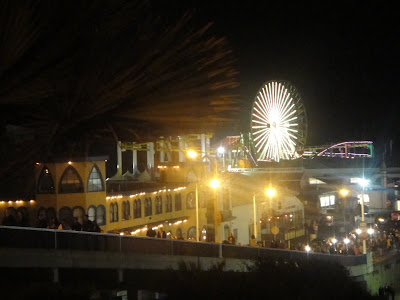 A bunch of us were going to Cirque du Soleil's Kooza at the Santa Monica Pier and decided to meet up for drinks and dinner prior to the show. There are many restaurants in Santa Monica that were offering discounts to ticket holders, ranging from two-Michelin Starred Melisse to Pinkberry. I'm all about happy hours and good deals and I have been wanting to try newly revamped The Yard. The once sports bar reopened last week with a new look and menu. The chef that conceptualized the new menu is CJ Jacobson, a favorite contestant from Top Chef Season Three. They now offer fancy cocktails and tapas/small plate menu under the concept of a gastropub. 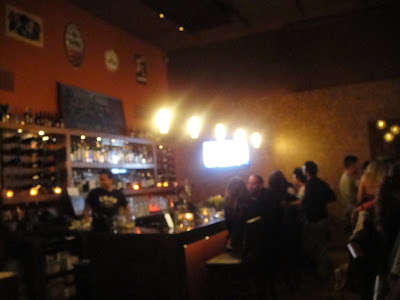 The bar is trendy and modern, with high ceilings. They have patio seating as well which is on the sidewalk of Broadway Ave, a prime people-watching location. 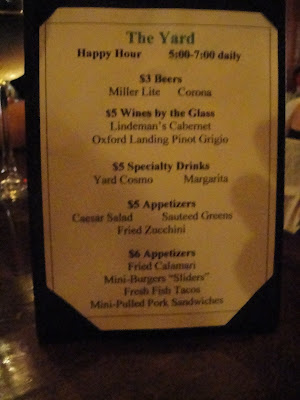 Happy hour runs from 5-7pm. House wine for $5, beers for $3 and appetizers for $5-6. They also have a bunch of daily events including food and wine/beer pairing on Wednesday and Ladies night on Thursday among others. 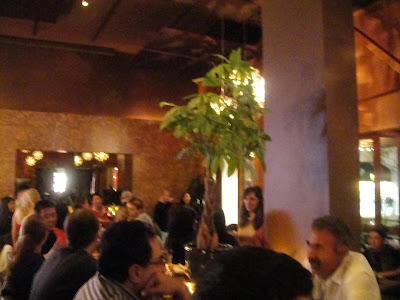 The place was pretty packed at 6.30pm. I wondered if it was always that crowded, if the new menu was what's attracting patrons or if the diners were just there hoping to catch a glimpse of the 6'8" chef. We weren't able to be seated at a table unless our whole party was there. Luckily, I managed to snag seats at the communal table in the center of the bar. 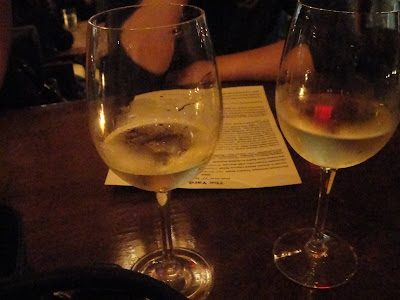 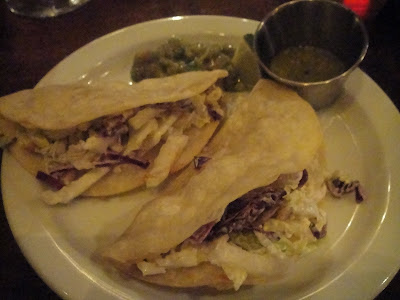 Fish taco with cumin slaw, guacamole and Pico de gallo
There was a creamy sauce mixed in with the slaw and the taco was served in a hard shell. There were loads more cabbage than fish. I thought it was fine but not the most flavorful taco I've had. Apparently Wahoo's is better (I haven't had enough fish tacos to be able to compare) but I could say for sure that this taco tasted fresh, from the fish to the crispy taco shell. 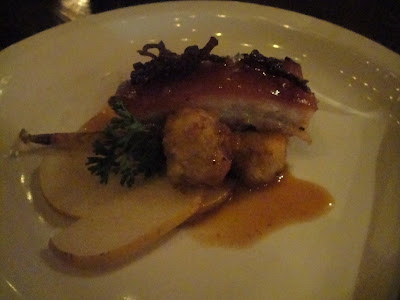 Pork belly from the specials, not happy hour menu
Root beer braised pork belly with pear, pork brittle and tater tots
The tots were the favorite as it was fresh and obviously not frozen ore-ida. The beef was fatty although you couldn't really taste the root beer flavor. The pear didn't seem to belong on the plate as it didn't add anything to the meal. The brittle was sweet and good in concept, but seemed inedible because it was too hard and was just like eating a twig. 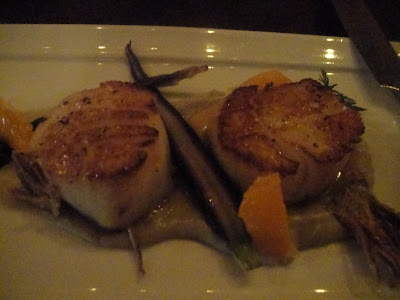 Pan seared diver Scallops with mandarin artichoke puree and ginger date vinaigrette from the dinner menu
The scallops were a nice size and were cooked well but I got a bit too much pepper on one of my bites of scallop. It was an alright dish but not something that left me wanting more. 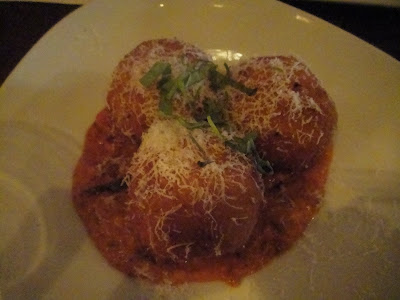 Arancini balls with mozzarella from the specials menu
I asked what type of cheese was in the arancini and our waiter said, mozzarella and arancini. Hmm.. didn't know that arancini was a type of cheese. In any case, given my distaste for cheese, I didn't try it but apparently it was good and very cheesy. The marinara sauce added a layer of sweetness to the salty, cheesy balls. Yes, I said salty balls. 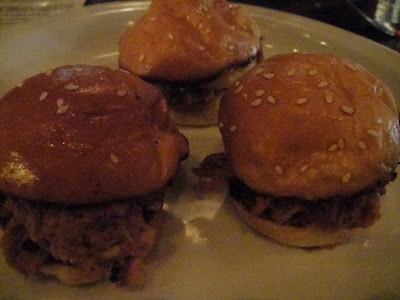 Mini pulled pork slider with crispy onions
This was my favorite. I'm not sure if it was because I was famished by the time it came out (I'll talk about the service later). We literally gobbled this up in a minute. The pork was tender and juicy with the right amount of BBQ sauce. I also really liked the toasted bun which had either a little drizzle of butter or oil. These little goodies look so cute and tiny, how can you not like them? And three sliders for $6 is a good deal. 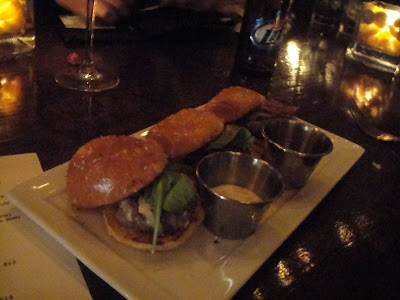 Mini beef burgers, served with greens, bacon and cheese
It would have been good sliders but unfortunately, the meat was overdone. Perhaps it had been sitting under the heat lamp for some time while we were waiting anxiously at the table. But yes, this was a good price at $6 for 3 sliders. Since we were running late for the show, my friend literally grabbed her last slider for the walk to the pier.

So, overall the food was fine and I ended up paying $30 for two drinks and splitting the pork sliders, tacos and scallops with my friend. Almost everything we got (except for the scallops) was priced under $10 so optically, it was a very affordable meal. The service was painfully slow and our waiter did not seem concerned that our food wasn't coming out even though we had a show to catch. Dude, we are going to a Cirque du Soleil show, not the movie theatre. If we're late, we'll miss some crucial parts of the show. It's very odd because you'd think that they would have been aware of the need for a tight turnaround since they are one of the restaurants that is offering discounts to ticket holders. BTW, we didn't even use our 15% discount because our friend who had our tickets was not with us. I had put in the order for the fish tacos first and that came out in about 10-15 minutes. However, the other food took over 45 minutes! I mean, they were all really small bites. Why would the sliders take 45 minutes. It wasn't as if they were waiting to serve all the dishes together. In fact, our waiter asked if we wanted them all the come out together and I said no, whatever's the fastest. I honestly think they forgot our orders because we saw a couple tables being served the arancini balls and sliders before us even though they had been seated after us.

In order to facilitate the process, we had to ask for the check even before getting our last dishes. It really kind of sucked because this left a bit of a bad taste in my mouth. There were some things that I liked about the place (the pork sliders, the cheap happy hour grub), but I felt so rushed and frazzled, and still hungry after it all. If we had been served earlier, I would have realized that what we had ordered wasn't enough and would have gotten more food. But after all that's said and done, I'd still give this place another chance. I'm all for gastropubs in the Westside. I'd love to try the ribs and risotto, and maybe next time, I'd be able to stay longer than 1.25 hours.

Since we were still hungry after our Yard snacks, I am embarrassed to say that we popped next door to Joe's Pizza for some takeout - which took all of 2 minutes. 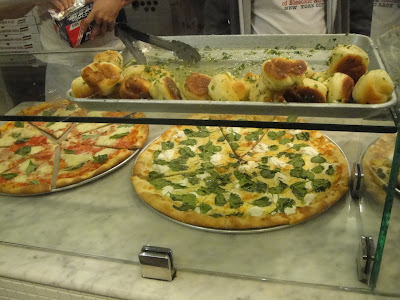 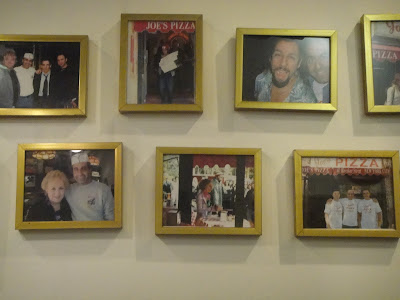 Photos of celebs on the wall. Must be a good sign. 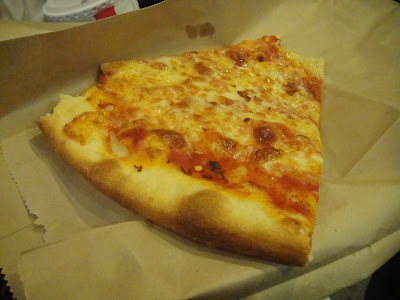 Cheese pizza, not mine of course. It was crispy with a thin NY style crust. The layer of cheese was not congealed even when it cooled indicating that it was real cheese. Very simple but everyone was satisfied after that. 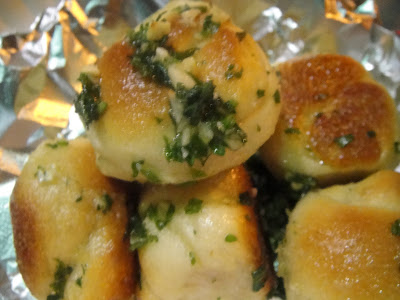 I got the garlic rolls which were six for $2. They were topped with garlic and parsley, then warmed up in the oven. They were a bit doughy but I was starving so these puppies were gone in two minutes.

We just about made it in time to the tent. I haven't been to a Cirque du Soleil performance since I was a kid and it was at the Santa Monica pier as well. I remembered it being so massive and crowded, but it definitely turned out to be more intimate than I had expected. I'm not sure if it was because I had a skewed perception as a kid, or if they downsized because of the recession. 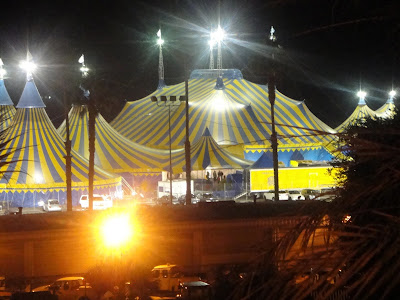 I love those blue and yellow tent colors (GO BRUINS!!). Inside the big top, you'll find concession stands (popcorn, beers for $8) and souvenirs. My favorite acts were the trio of Contortionists and the Wheel of Death which is basically a two-huge wheel contraption that is similar to a hamster wheel. Sort of. You'll have to see it to understand.

You know you're enjoying every moment when the time flies. During the 30 minute intermission, we walked over to Bubba Gump Shrimp for a drink and to avoid the circus bathroom/trailer line. 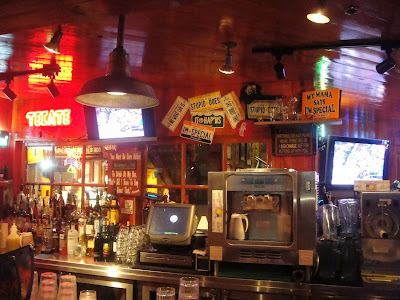 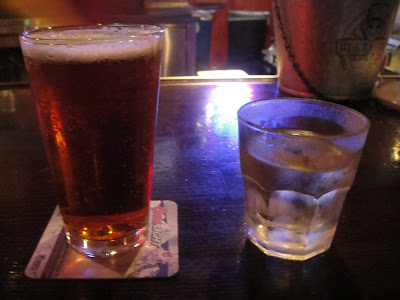 One beer and one huge glass of wine.

We returned back to the big top for the second half of the show which had many nail biting incidents. Kooza was such a fun event. It's great to experience it as a grownup because I don't remember much when I saw it as a kid. Make it a whole night affair and meet up with friends and loved ones for drinks and grub before hand. Hopefully somewhere where service is brisk.

Nice review of the new menu at The Yard. I might be going there next week for our team happy hour. And I don't blame you one bit for going to Joe's. I love that place!

Thanks Daniel! Try to get there early if you want to sit at the communual table. And the happy hour prices are great! Have fun!