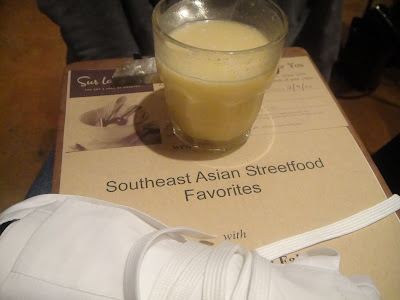 I love Southeast Asian food, I KNOW Southeast Asian food, unfortunately I don't know how to cook it. When we heard that Sur la table was having a Southeast Asian Street Food cooking class (for $79), we signed up immediately. On the menu was Satay, Hokkien Char Mee, Banh Mi, Pho and Som Tum/papaya salad. I knew I was going to be a harsh critic because I grew up with the best satay and Hokkien mee in Singapore.

Sur la table is located at The Grove by the Farmers Market. Usually I like to avoid any sort of mall setting but it wasn't too crowded and there was ample parking. The class was run by chef Martin Gilligan and guest chef Hernani Fabros. I was interested to see how an Irish and Filipino would fare with the cuisine.

I was elated when I arrived and was greeted with an adult beverage: pina colada with Asian rum. We were also given clipboards with recipes, an apron, and a 10% discount off any Sur la table purchases within the next week. There was about 12 participants in total so the class was rather intimate and hands on. 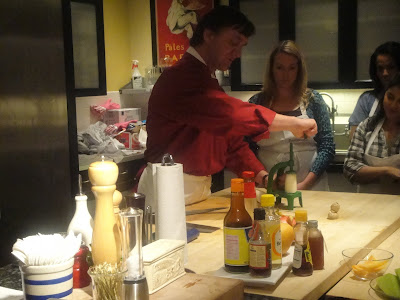 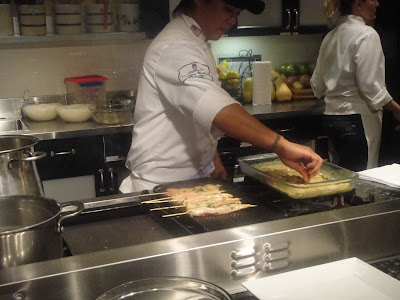 The class started off with a demonstration where Chef Gilligan showed us how to cut up ginger and radishes, and Chef Fabros prepared the chicken satay. After the demonstration, we were to break off into group to work on one of the dishes. LB and I made a beeline for the Hokkien Noodles station since the preparation looked a little more challenging than the rest. We're dorks like that. 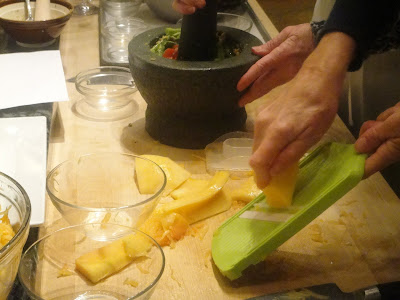 A student shredding up papaya for the salad. 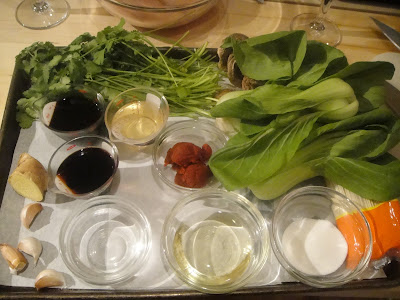 Ingredients for our noodles. I liked how everything was already measured out for us, wish that could happen in real life. 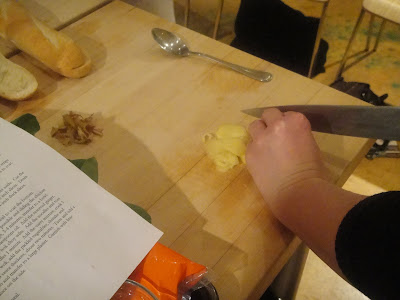 LB chopping up ginger while I took control of the garlic. 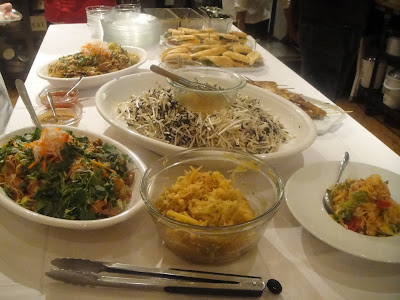 After slaving away in the kitchen, this was the final layout of the dishes. 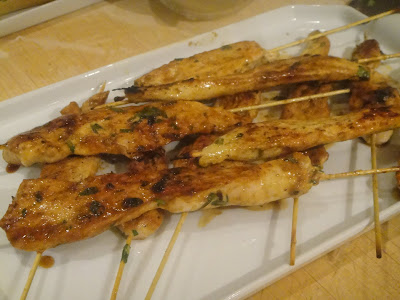 Chicken satay. This was an easy dish to prepare and would work well as an hor d'oeuvres at a dinner party 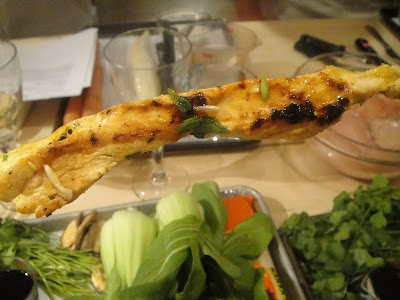 Surprisingly very tender and juicy given that it was white meat. You could prepare it before hand on the grill, then add it back into the marinate to macerate until your guests arrive whereupon you would place it back on the grill before serving. I also liked the addition of coconut cream and curry which gave this a very Asian flavor. 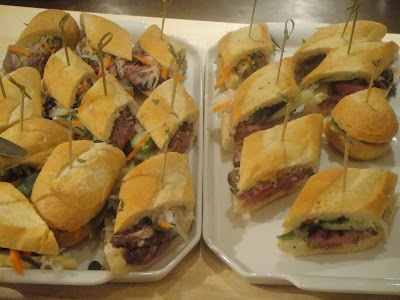 Banh mi is Vietnamese sandwich which usually includes meats, mayo, pate and pickled vegetables. Personally, I did not care for this sandwich because I didn't think it tasted authentic. It could easily have been something that was served at Togo's. The meat was filet mignon which was a good choice, but there was too much American mayo, no pate, and the pickled vegetables were rather bland. I would take Nom Nom's BBQ pork or Lemongrass Chicken banh mi over this any day. 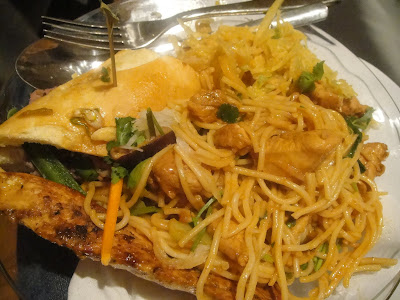 Our Hokkien noodles! Pretty darn good, I might add. It was flavorful and the chicken was juicy. The noodles were topped with a heap of cilantro and pickled vegetables which really gave the dish an ethnic flavor. On the plate was also papaya salad which was rather tasteless. It needed more spice and tang, perhaps more fish sauce, lime juice and chili. 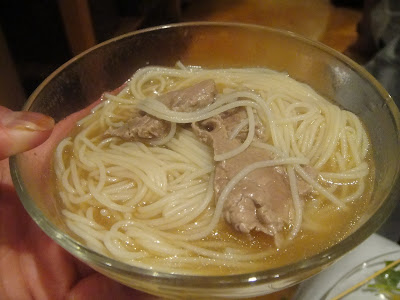 Beef pho. Due to time constraints, we did not prepare the broth from scratch and instead used chicken stock. It's unfortunate because the broth was tasteless. It lacked the rich flavors that would come from simmered beef bones and from spices. Also, this was missing my favorite ingredients in pho: tendon, tripe, basil, lime and bean sprouts. A lady who was assigned this station was not happy about the packaged broth. She said she attended this cooking session because she wanted to learn how to make the broth. She "already knows how to throw noodles into soup", she said. Because she wasn't "learning much", she bogarted our wok of Hokkien noodles. Normally, I'd punch her in the face but LB and I were glad to take a break and savor our wine. 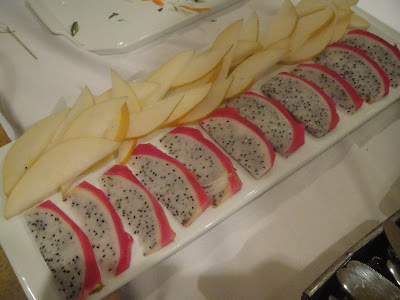 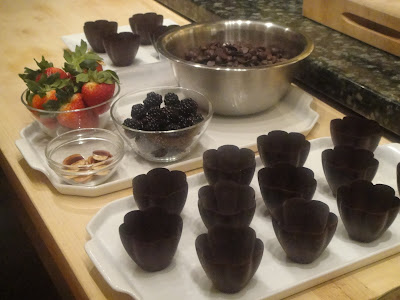 Preparation for dessert. Ooh, this is going to be good. 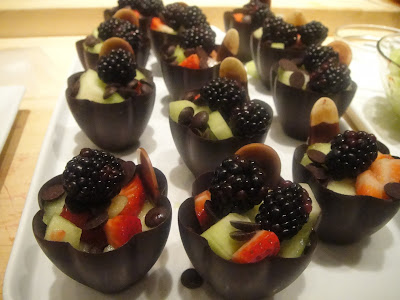 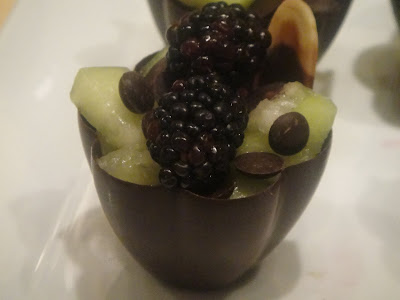 Dessert was a chocolate cup with fruit. It was visually beautiful especially the tiny chocolate chips that garnished the cup. I love anything chocolate but I didn't care for the melon. It's do generic and cafeteria-like. Perhaps they could have used something Asian in the cups such as jackfruit or rambutans.

Overall, it was a fun night. Cooking new recipes is fun. Cooking in the kitchen with a friend is also fun. Cooking in a kitchen with a glass of wine is even more fun. The chefs were fun, patient and helpful, although I asked Chef Gilligan what his favorite Southeast Asian cuisine was and he replied Japanese. Humph.. I liked that we chose this cuisine over something more accessible such as Italian. Southeast Asian food is all about bold flavors and spice. Unfortunately I didn't really get that with these recipes. Yes, some of the food was tasty (noodles, satay) but I found this to be a watered-down, American version. The distinct flavors you would expect from papaya salad and pho was lacking. That's not to say that I won't use these recipes, they just need a little readjustment, like adding loads more chili to the dishes.