Valentino: you're gonna need that 30% off 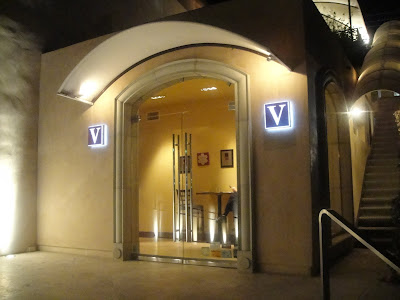 What's better than dining at a Michelin Starred restaurant? 30% off at a Michelin Starred restaurant, thank you BlackboardEats. Valentino has been on my list for a while but it's rather pricey and it's Italian. Some how I can't bare to bring myself to drop Benjamins for an Italian meal. French on the other hand, seems quite acceptable. I was stoked when the 30% coupon appeared in my inbox a couple weeks ago.

Based on what I've read online, Valentino excels in their pastas. Yes, I'm still on that pasta kick but give me another week and I might be sick of it. It's definitely a pricey, special occasion place with appetizers in the range of mid teens, pastas (as a primi, so they are not large entree portions) in the twenties and entrees in the high thirties. Don't forget their extensive and impressive wine list. They also offer a four course tasting menu for $65, with an optional wine pairing for $50. We were tempted to go this route but there were too many other things on the regular menu that we couldn't pass on.

Valentino is located in Santa Monica/Westside on a stretch of Pico Blvd. that doesn't house too many dining attractions. It's slowly building up on that front, with Upper West and Bite Bakery & Bar opening up a couple blocks away. 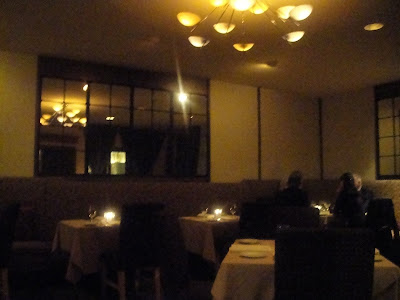 The bar area is called V-Vin Bar with its separate menu which includes grilled flatbreads and pastas. The place was rather packed (although with middle-aged people) which was quite surprisingly as I wasn't expected Valentino to have much of a bar scene. The dining room is a bit formal- gentlemen were in jackets. I felt a bit out of place in my jeans and flip flops, but in my defense, I had a bandaged toe, hence the flip flops. Gonna milk that excuse for as long as I can :) 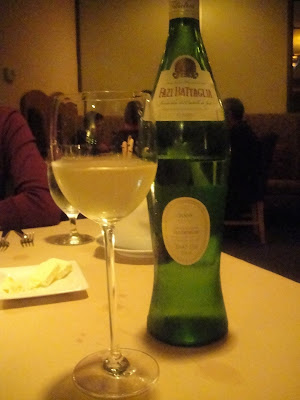 We started with a bottle of white wine, a Fazi Battaglia 2008 which was fresh, citrus and perfect for our first course. At a fine dining restaurant such as Valentino, you should specify a price range if the waiter is suggesting a bottle, that is unless you have deep pockets, which we don't. We mentioned a range of ~$60 and the bottles he selected were good. 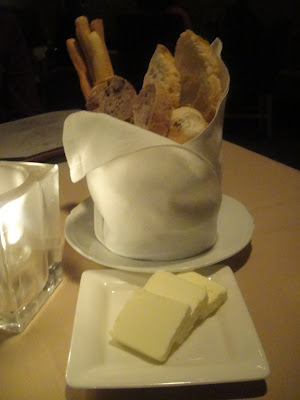 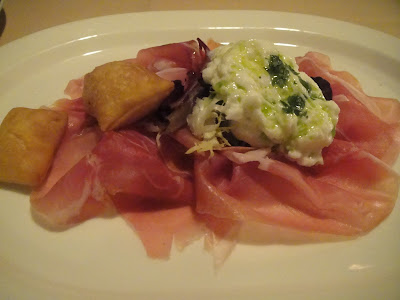 Prosciutto e Burrata San Daniele prosciutto, aged 20 months, fresh Apulian burrata and “gnocco fritto”
The prosciutto was fresh, and the burrata was mild and creamy. It was a lovely combination. You could tell the excellent quality of the ingredients unlike the pathetic, shriveled up charcuterie plate I ordered at Bottlerock last week. The fritto gnocchi was basically a hollowed pizza pocket, sans pizza. Initially I thought it was tasteless but it actually went well with the salty cured meat. A+ for sure.

We decide to order two pasta dishes to share, which were both specials of the night. To our surprise, the kitchen portioned it without us asking (and at no extra charge either). 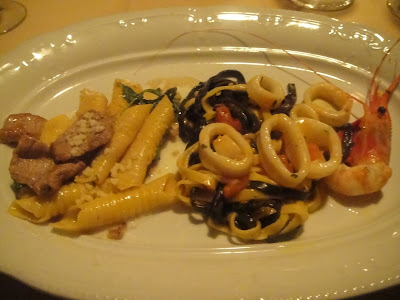 Hand rolled pasta with veal carpaccio, arugula, aged balsamic and shaved pecorino. I was glad to see that the veal was sauteed instead of thin raw slices, which is what I associate carpaccio with. The veal was tender and well seasoned.

Fettuccine and squid ink tagliatelle with Santa Barbara spot prawns, calamari, cherry tomatoes in lobster sauce. There was just the right amount of pasta and seafood, and the sauce had the right consistency and coverage on the pasta. The seafood was cooked perfectly. The calamari was tender, and the prawns were just a tad undercooked. It tasted as sweet as lobster which was amazing, especially the runny prawn brains that dripped all over the pasta. And top it off with, rich lobster sauce?!? I was in seafood heaven.

I can see why people rave about the pastas. This was our favorite of the night. The pasta itself was fresh and cooked perfectly. 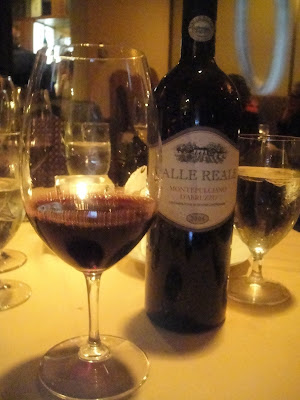 Bottle of light red wine to go with our entrees. We requested a light red and our waiter brought over a bottle of Valle Reale Montepulciano. 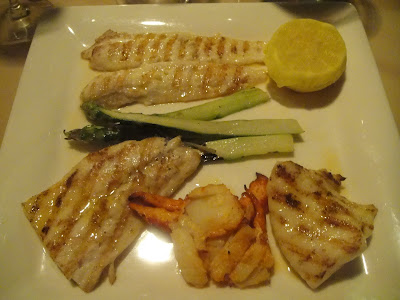 The fish special of the day. Seafood four ways which included (from bottom right going clockwise) turbot, lobster, branzino and dover sole. I liked the lobster the best. Unfortunately some of the fish was under seasoned. Even a drizzle of sauce did not bring out the flavors of the fish. 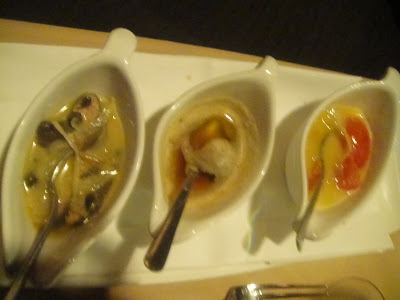 The fish was served with a trio of sauces: tomato and butter, clarified brown butter and caper and oil. 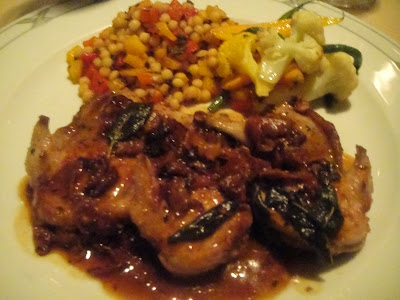 Le Quaglie: Pan-roasted Wolfe ranch quail, fregola Sarda and pancetta
I was going back and forth between this dish and the osso bucco (I just find it hard to turn down osso bucco if it's on the menu), however the latter is something that I always order so I decided to go with the bird. I thought the presentation was lovely. There were three pieces of quail which worked out perfectly as we each got one piece. I really enjoyed this dish. Some at the table complained that it was a bit overdone but I didn't think my piece was. I must have given them the bad ones :) The sauce was very flavorful. The quail came with a side of Israeli couscous with bell peppers, cauliflower and haricot vert. 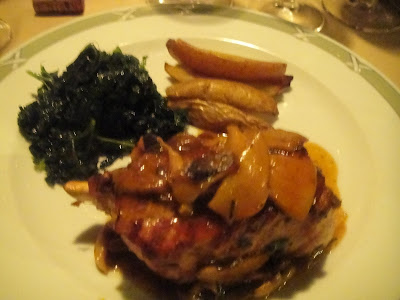 La Lombata di VitelloGarlic-rubbed grilled veal chop, wild mushroom sauce
That was a big hunk of veal chop that I was so surprised that it was cooked medium perfectly through. It was moist, with a hint of pink in the center. The chop was topped with a rich earthy mushroom sauce. Also liked the crispy fingerling potatoes.
The food was good with the appetizers excelling. The pastas were absolutely delicious and something I would definitely return for. Valentino is not cheap at all so the 30% discount really helped. Some people on CH were concerned that the service would be diminished if you were using the 30% but I did not find that to be the case. The service was great with our waiter coming by promptly to fill up our wine glasses. His wine selections were also good, and fell within our budget. When the bill came, they had only discounted us for the food. We advised our waiter that the bartender had mentioned that the discount applied to both food and beverage. Apparently this wasn't the case: discount applies to F&B only if you are dining at V-Vin bar. However our waiter still applied the discount on the full bill. I thought that was a nice touch. Don't forget to tip the waiter based on the total bill before the discount. Don't rip him off! I'm glad I finally got to hit up Valentino as it's been on the list for a while. I'm glad that I walked away with a $100 expense instead of something a third higher. I'm glad I held out.

I'm a huge fan of squid ink pasta - it's nice to know where to find it! Though I think I may need to save my pennies before I can indulge!