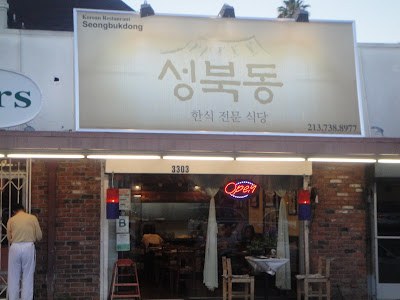 It's Friday. My bags are all packed for another weekend of snowboarding in Mammoth. Checked the snow report. No new snow in a week. Sunny with temperature as high as 41 degrees. Hmm... doesn't sound like my ideal snowboarding condition. I love my fresh pow. Think it'd be a better weekend in SoCal. Done! I'm staying in town for the weekend. Plans for the weekend? Done! Friends were going out for korean food and karaoke on Friday. Party on Saturday. Combine that with surf, mimosas and farmers market and I'm back to my non-winter weekend routine. I can already tell, it's gonna be an amazing weekend.
We headed over to Korean restaurant Seongbukdong which has been highly raved online. It is named after a city in Seoul where the proprietor is from. In Koreatown where there are many Korean BBQ options, it was great to check out a spot that focused instead on home cooking, stewed comfort food. 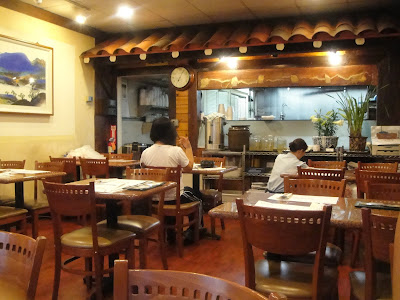 The restaurant is located in a small strip mall. Thankfully they have a valet, $1 with validation. It's tiny inside with about ten tables. Our party of eight took over a large part of the restaurant. It was empty when I arrived at 7pm but quickly filled up. 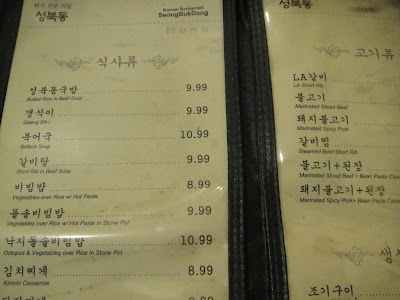 The menu's pretty simple with about 20 items. Unfortunately they do not serve alcohol and is not BYOB even though there's a liquor store next door. Kindda sucks because a beer would go well with all the meat we would be having. A brief menu research informed us that the must-get items were the beef short ribs and grilled mackerel. 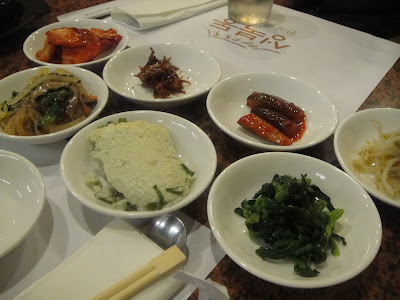 Our waiter brought over banchan which included steamed egg, bean sprouts, kimchee, chap chae and spicy anchovies. I liked that they offered brown rice/purple rice with beans, this is LA after all. 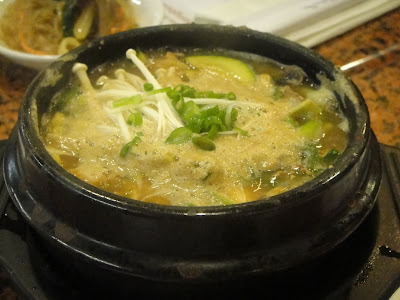 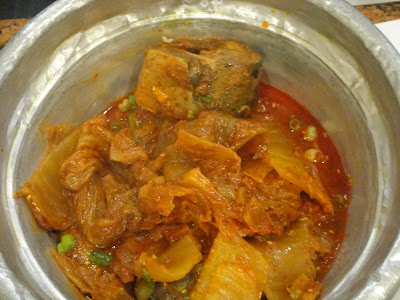 Braised mackerel simmered in a huge bowl with kimchee, daikon and bean paste. Mackerel is usually rather fishy so you have to expect that. The fish was tender and oily, and the sauce had robust flavors and was great on rice. The only issue I had was that there were too many bones in the fish which made it a very challenging task to eat. 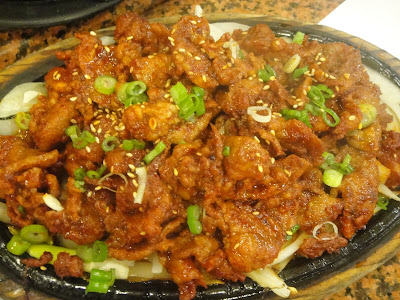 Marinated spicy pork. This is my favorite dish at any Korean BBQ restaurant because the pork is usually tender and a little gristly. The pork was juicy and flavorful. 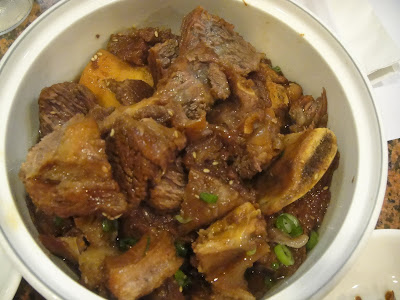 Steamed beef short ribs. Thick chunks which the waitress cut up into sizable portions with a scissors. The ribs were stewed in a sweet salty sauce and fell off the bone. The ribs had some fat and tendon pieces still attached which was my favorite part. The dish was so delicious that we ordered two more bowls. If it couldn't get any better, it seemed that the latter bowls tasted much better perhaps because the meats had been simmering for much longer. 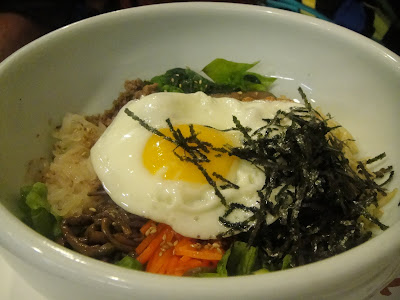 My friend is a vegetarian so she ordered a vegetarian bibimbap. It looked good but GASP, it had beef in it. We returned it and within a couple minutes, a new bowl arrived. Suspicious. The bibimbap was not what we expected. There was no rice, let alone that nice crispy bottom layer of rice which is the best part of any bibimbap. Otherwise, the variety of vegetables and fried egg on top was lovely. After my friend almost finished the bowl, she found residue of beef. She didn't kick up a big fuss but I found it quite disheartening.

Apart from the bibimbap snafu, everything we ordered was delicious. The beef ribs were to die for and the spicy pork is definitely something I could have had more of. The best part was that we weren't at a BBQ joint so we didn't stink of smoke. That's perfect if you are planning to continue the night off at a bar with BOOZE, which I did, of course.

this place.. is SO hyped.. and the prices are SO high. Half of the dishes are easily prepped at home (or at least by my MIL), and the quality of that mackerel is borderline Von's/Ralph's... I don't get it.

Hahah but SinoSoul, unfortunately I don't have a MIL that can make this for me!

Hi stuffycheaks, I came across your blog randomly, and I recently discovered Seongbukdong too! I loved the braised mackerel; you've gotta try the gookbap next time you're there. I put a link on my post to yours; I hope you don't mind.. happy eating!