What a night out in Hollywood: HH at BoHo, Metric concert and nightcap at The Tar Pit

Two concerts in a row, I could be so lucky.. or perhaps not. You'll find out why later. I was stoked for the Metric concert at the Hollywood Palladium. They are a pretty awesome band that I try to catch whenever they are in town. Their shows are energetic and a lot of fun. I decided to happy hour nearby at BoHo prior to the concert. 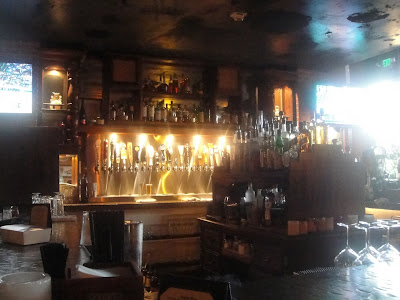 BoHo is a gastropub conceived by Andre Guerrero (Max/Marche, the Oinkster) and Adolfo Suaya (Surly Goat) and is located by the Arclight Theatre. The decor matches the name. It's eclectic inside and has that thrift store feel to it with its mix and match couches, Tiffany lamps above the booths in the bar area, chandeliers in the main dining room, and diverse artwork on the walls. But I wasn't there for the decor. I was there for their happy hour deals that run till 7.30pm, and their selection of artisan beers. 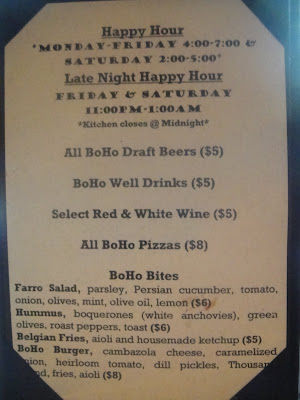 Their happy hour menu is pretty good. $8 pizzas and $5 draft beers is a steal. BoHo has a great selection of amazing beers and their pizzas are interesting, including pesto chicken, baked fennel and bacon, potato and garlic and a Korean BBQ short rib pizza. 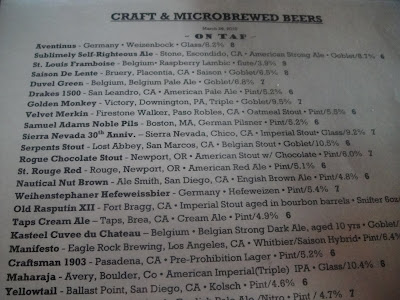 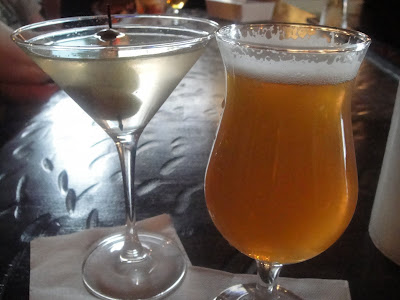 Dirty martini and a Saison De lente from Bruery. 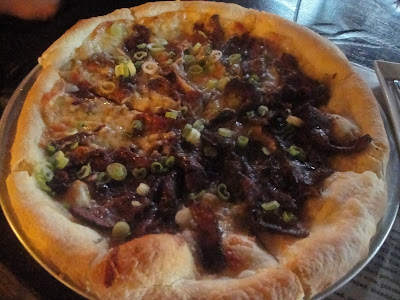 Kalbi pizza, half light on cheese for me, with BBQ short ribs, fontina cheese and scallions. 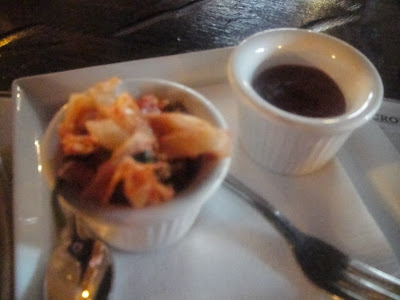 Served with a side of kimchee and chili paste.
The pizza was rather large. I liked the kimchee and the spicy paste which gave it additional flavor. The meat on the other hand was a little dry and not juicy, unlike what one is used to at Korean BBQ restaurants. The crust was dry and bland, and could have used a bit more butter and seasoning. 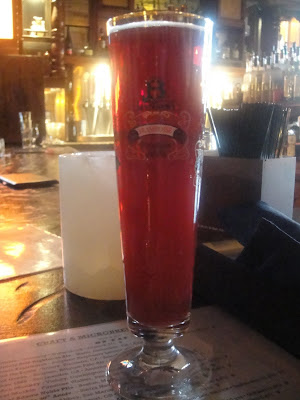 I was feeling something sweet so I ordered the St louis Framboise. I love me some Framboise as it was refreshing.

I ordered another beer then went to feed the meter a couple blocks over at Sunset and El Centro. To my horror, I found my car window smashed. All this happened within an hour, when it was still light. 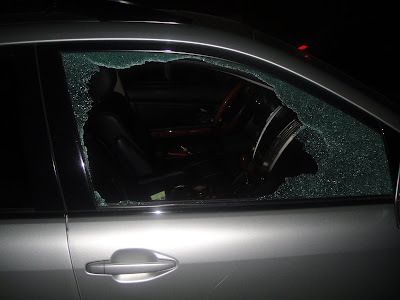 The suspect took a bunch of electronic goods in my car including my laptop, iPod and GPS system. Jerk. 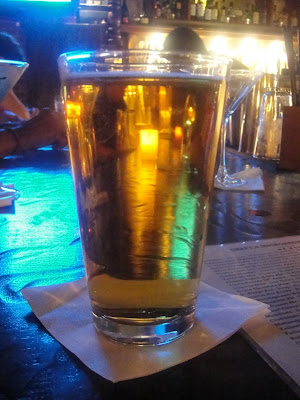 When I rushed back to BoHo, my Taps Cream Ale had arrived. Not what I expected, thought it would be like a Boddingtons but the beer was missing that creamy head and smooth texture. I gulped as much as I could before rushing back outside where I had seen a cop pull someone over across the street and I was hoping to catch him before he left. 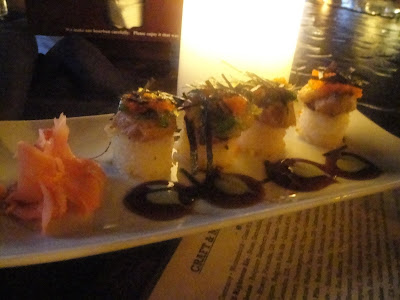 Our ahi tuna was also served. Ahi towers with crispy rice cakes, ahi tartare, seaweed, wasabi tobiko and soy on the side. We packed the tuna to go and by the time we got a chance to taste it (almost an hour later), it tasted a little fishy. That's too bad because I am sure it would have been better if we had eaten it at the restaurant.

We went back to the Westside to drop off my car at home. In all the chaos, I noticed that my concert ticket was missing. The night would have sucked big time if I was left car less, and at home while an awesome concert was playing across town. Thankfully we found out that our friend had an extra ticket. From here, the night picked up, thankfully! 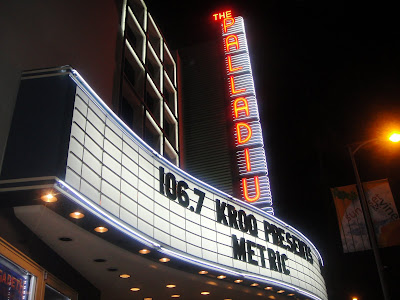 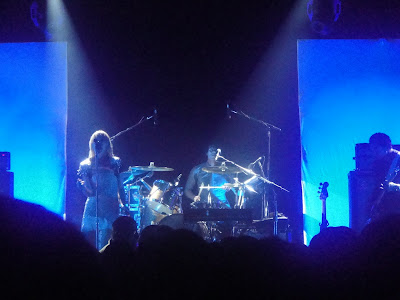 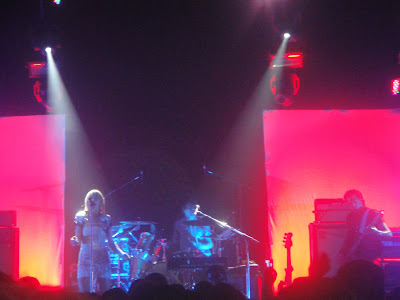 We got to the Palladium right in time to grab a drink while the band got on stage. The concert was sold out so the place was packed. We were able to score amazing spots pretty close to the front and center.

After the concert, our party gathered outside. While we said our goodbyes, a wonderful, greasy, meaty aroma filled the air. 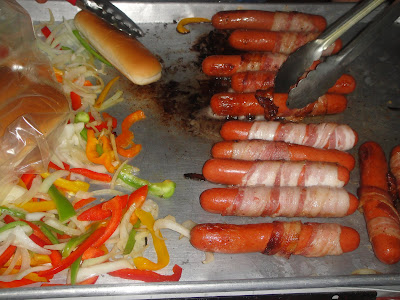 There was a bacon wrapped hot dog stand right outside the concert venue so we decided to split one. 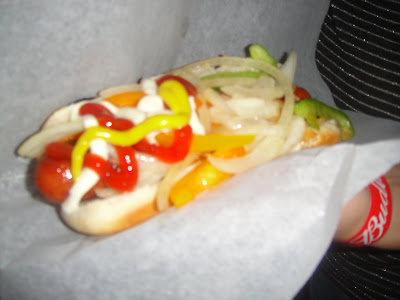 I only had one bite but I enjoyed it. What's there not to like if it includes bacon?! The dog was topped with onions, peppers and condiments including mayo, ketchup and mustard.

When we drove back, we passed The Tar Pit (i.e. the bar, not the fossil museum) and made a game time decision to stop. I stopped by The Tar Pit recently for food and drinks, and really enjoyed their duck sliders and fried oysters. That's not surprising as the chef/owner is Mark Peel of Campanile, and contestant on BravoTV's Top Chef Masters. 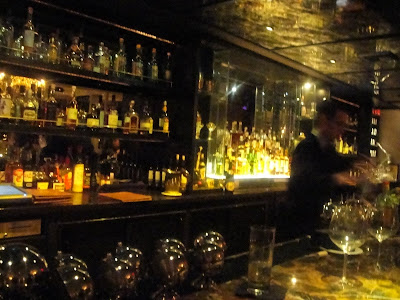 We grabbed seats at the swanky bar. The place is sophisticated and classy. 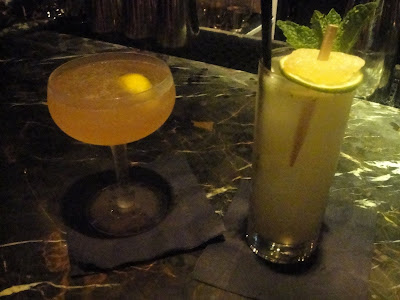 The highlight of the night was when we spotted Mark Peel walk by. We chatted with him and got a photo with him.

It was a fun, eclectic night, starting off with beers and pizza at a casual, bohemian joint, followed by a kick a** concert, some greasy bacon wrapped dogs to soak in the alcohol and to cap off the night, cocktails at a classy joint. The sucky start to the night was now all a distant memory.

Mark Peel was at Tar Pit the night I was there too! He came out and was talking to some customers right by our table - I definitely stared. :)

sooo sorry about the car window! at least you finished off STRONG with the danger fadogs!

Diana - MP definitely made my night. Who needs movie star sighting when you can have a chef sighting?!
SinoSoul - thanks! And those dogs were yummy considering I barely ate the whole night but drank loads (to drown my sorrow)!!