(laksa) soup to ease the pain

So, I kindda had a minor injury. My toe's swelling (I won't post pictures but let's just say it's 1.5X it's normal size) after I banged it against rocks during a surf session over a week ago, only to exacerbate it snowboarding over the weekend. It's times like these when you know that only one thing could help make it all better - mom's home cooking. 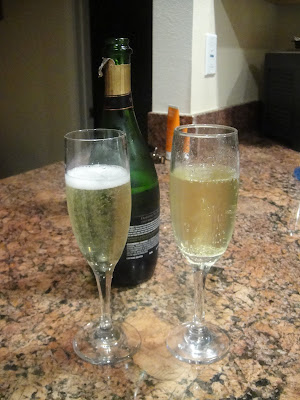 A meal with mom always starts off with champagne. IMO, I think champagne pairs well with everything: french food, burgers & fries, Indian food, pizza, pasta, ramen.. you name it. Mom decided to prepare Laksa, which is something that I grew up eating and is the Southeast Asian version of comfort food chicken noodle soup. It's a spicy, coconut based noodle soup that usually can include shrimp, sprouts and shredded chicken. There are many variations of laksa but the one my mom makes is the curry laksa, nonya style with a dried shrimp base with loads of home made sambal belacan chili. Good laksa is hard to come by in LA so this was a real treat. 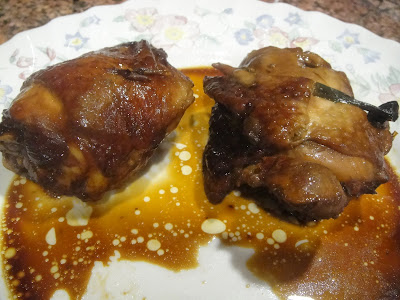 While mom prepared the laksa, she offered me some chicken to nibble on. Soy sauce chicken that was marinated with dark and light soy sauce, garlic, ginger, sugar, and thrown into a pot to simmer. She threw the chicken and sauce into a rice cooker, but you can also use a pot. The result is a scrumptious piece of bird that is both tender and flavorful. 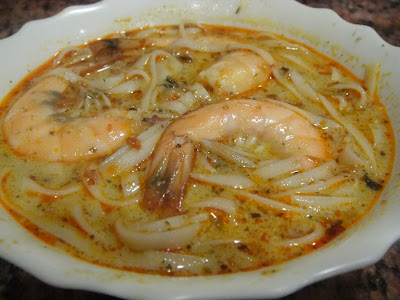 Next up, a hot bowl of laksa. My mom usually throws in fish cakes and bean sprouts but she didn't have that on hand. Either way, this was delicious and she made it extra spicy. I coughed nonstop for 3 minutes after the first gulp. I liked the rice noodles as they were thin and not too starchy. The soup was rich with coconut and seafood flavors. The laksa was not only soothing and comforting, but also cleared the sinuses and made all my pains go away. Well, at least for the night.