(NOT) the meatiest sauce in town @ Luigi's, HB 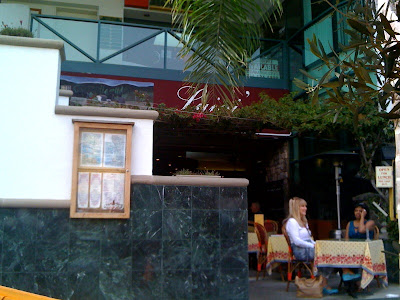 After a day of surf, I usually crave carbs. A lot of it. Unfortunately for me, I'm not one of those no-carb kindda girls, so bring on the pasta! We headed for Huntington Pier/Main Street in search of food. Not surprisingly, the place was packed and every sidewalk table seating was taken with the exception of Luigi's. Perhaps on a sunny day like this, people prefer not to eat Italian food. We quickly grabbed one of the many empty seats at the patio. 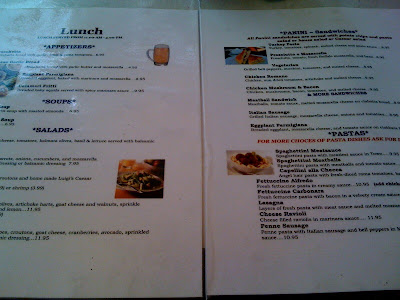 The lunch menu was pretty simple and comprised mainly of sandwiches and pastas. Prices were also reasonable at around $10 per plate. 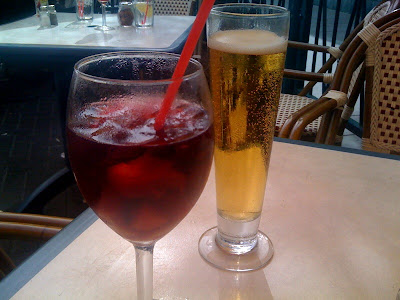 Even though mimosas are my weekend drink of choice, I couldn't pass up on the huge glass of sangia. It was stronger than the one at Bar Pintxo two nights prior, and a great deal at $5, so good that I ended up ordering two of these. Darren ordered a Spaten. 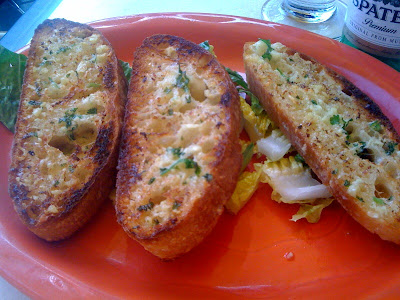 Since I was ordering pasta, I had to get garlic bread as well. Garlic and buttery goodness on ciabatta bread. Always a good starter to pasta. 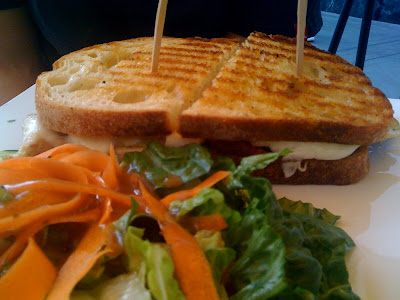 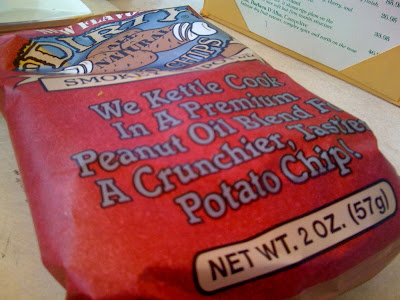 The sandwich was served with chips which was actually a bag of kettle chips. Lame. Wish they served it with fries instead. 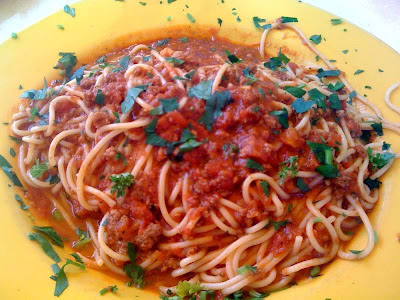 My pasta, what I was craving for all morning. Spaghetti with meat sauce, which the menu described as the "meatiest sauce in town". You think? It was rather lame. Firstly the sauce was runny, not thick and rich as I had hoped. Secondly there wasn't that much meat to it. I was expecting a hearty meal based on the menu description. You might think I am exaggerating but I would compare this to Lean Cuisine's pasta with meat sauce. Don't get me wrong, I like that stuff (have a couple boxes in my freezer), but this isn't what I would expect from a restaurant. I suppose I wouldn't have been disappointed if the menu hadn't talked up the sauce. A bit of a let down.

The food at Luigi's was alright. It wasn't horrible but it wasn't satisfying either. No wonder there were so many open seats in the patio. Next time, survey the situation and take the hint. Move along, suck it up and wait for a table elsewhere, or just expect that you won't be getting the "meatiest sauce in town".

I love this place. Best food in town. I only dine here for dinner and always full. This is fine dining not a lunch place. Open for lunch only in the summer. Try dinner menu. Rally good stuff. Salmon, lamb chops, to die for. You can't get this for lunch. Maybe if you ask ?