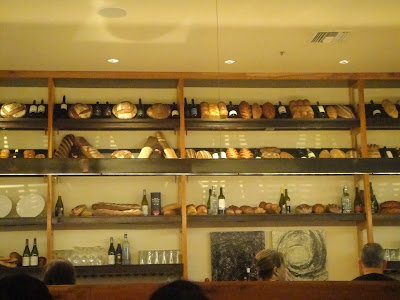 Breadbar in Century City hosts the Hatchi Series, a monthly dinner with guest chefs serving their own crafted menus. Even though we were disappointed with the service when we went to the Hatchi Series with Marcel Vigneron of Top Chef and previously of The Bazaar, we were interested in the recent chef guest, Iso Rabins. He's a forager who started ForageSF and The Wild Kitchen. ForageSF is in the business of providing customers with a delivery box of wild food bi-weekly or monthly. The Wild Kitchen hosts underground dinners in San Francisco, serving wild ingredients that Rabins goes in search for. Besides being fresh and natural, Rabin's food also utilizes less resources as it's grown locally. I'm not the best poster child for organic food and sustainability but I do appreciate the effort. 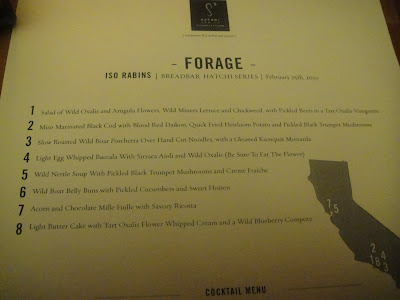 The menu features 8 plates for $8 each, with a minimum of 4 items per person. You may count their special cocktails as one of the 4 items. Thankfully since we are big eaters, hitting the minimum wasn't an issue. At the last Hatchi Series, we ordered all 8 plates each which was an overkill. There isn't a need for a dessert per person. This time, we smartened up. We decided to order a plate each of the items that we really liked and decided to share some of the other less appealing items (like salad!). Although the menu was different from the one posted online (which is usually my pet peeve), I wasn't bothered because the new items were still very appealing. The wild boar osso bucco was replaced with a wild board porchetta and the tuna tartare was replaced with the miso cod. There were a lot of Oxalis on the menu which unfortunately is a flower not ox. 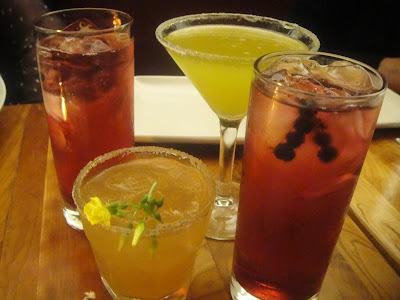 We ordered cocktails from the special menu.
Citrus drop (vodka, simple syrup, pureed foraged greens), Amaretto Sour and Blueberry Vodka tonic. The drinks were good except for the Blueberry Vodka which was bland and weak. 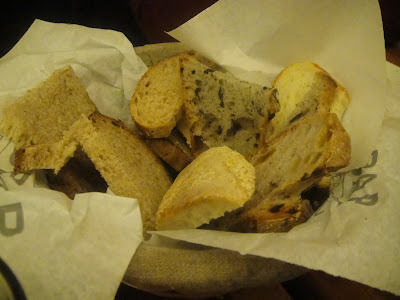 Since it was a special event, bread wasn't part of the menu. We decided to order a side of bread which they charged us $3. The bread was cold and the butter spread was solid. Kind of embarrassing for a place that is named Breadbar! We also ordered a bottle of wine to start. 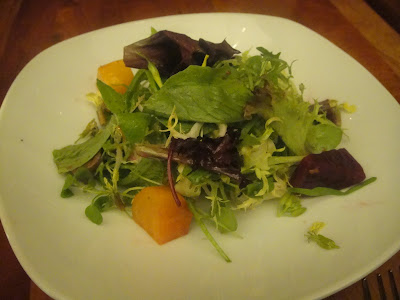 #1 Salad of wild oxalis amd arugula flowers, wild miners lettuce and chickweed with pickled beets in a tart oxalis vinaigrette
This wasn't anything special. In fact, it was boring and under seasoned. The best part was the beets but there wasn't much of that in the salad. 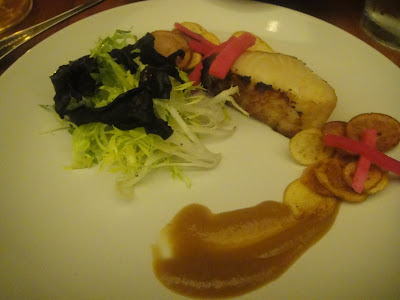 #2 Miso black cod with blood red daikon, quick fried heirloom potato and pickled black trumpet mushroom
This is Rabins' favorite dish on the menu and we agree. The cod looked overcooked and hard when it was served but it was actually cooked perfectly. It was well marinated with miso and there was additional miso smeared on the plate. The sourness from the mushroom and daikon worked well with the dish. 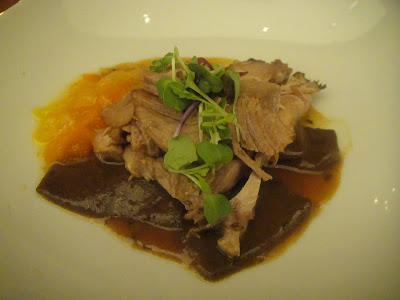 #3 Slow roasted wild boar porchetta over hand cut noodles with a gleaned kumquat mostarda
I thought the porchetta could have been more tender and fattier. The noodles were thick, dense and starchy, and could have used a little more salt. The kumquat however was a nice addition to the dish as it broke the gaminess of the boar. 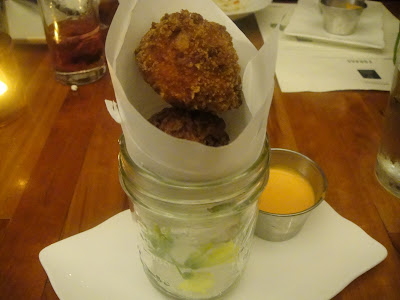 #4 Light egg whipped baccala with sirraca aioli and wild Oxalis (eat the flower)
Baccala is salted cod and this was prepared sort of like a cod brandade fritter. Unfortunately the fritter was hard. It was unpenetrable. No joke. I was trying to poke it with a fork and it flew across the table. Good in theory but it wasn't well executed. They recommend that you eat the Oxalis that was at the bottom of the jar which had a strong sour taste. 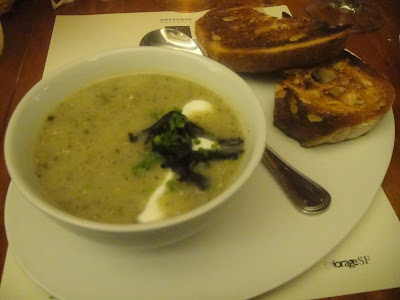 #5 Wild nettle soup with pickled black trumpet mushrooms and creme fraiche
The soup was cream based so it was rather heavy. I actually liked the soup because it was flavorful, however everyone else at the table disagreed. They said it had a strong herb flavor. 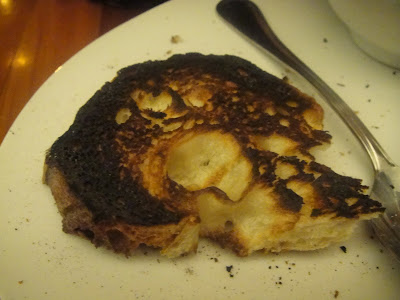 The bread that was served with the soup was burnt and bitter. Funny how they flipped the burnt side over so that you couldn't tell it was burnt. Sneaky!! Call yourself Breadbar and serve burnt bread?!? Tsk Tsk! 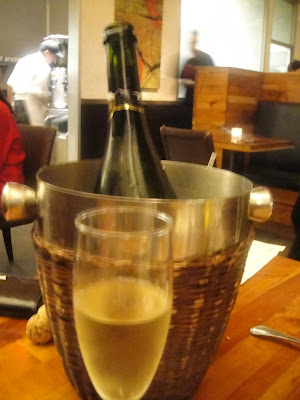 We ordered a bottle of bubbly. Yes I know, you are supposed to drink bubbly as an aperitif but we were craving it at this point. 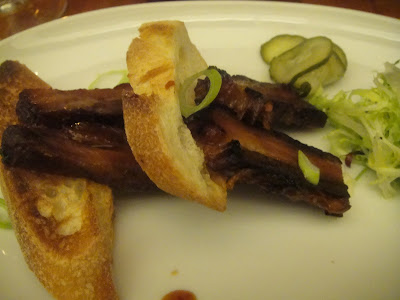 #6 Wild boar belly buns with pickled cucumber and sweet hoisin
This was served with toast, not buns which is unfortunate because I think a soft bun would have worked better than a hard, crunchy toast. The pork belly was sweet and tasted like Chinese char siew. I liked the flavors however I thought it was a bit tough and hard to cut. Pity, because pork belly is supposed to be soft and tender. 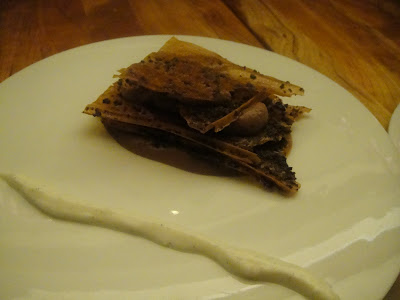 #7 Acorn and chocolate milk fuille with savory ricotta
The fuille was light, crispy like French crepe wafers. The chocolate was bitter, which I enjoyed. 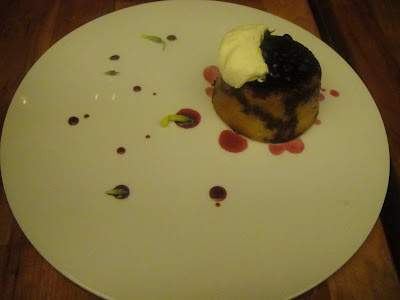 #8 Light butter cake with tart Oxalis flower whipped cream and wild berry compote
This was kind of like an olive cake. The cake was good and surprisingly rather light.

Chef Rabins came by to chat and check in on us. The service was also better than our previous experience although they were still piling on the dishes. Our waiter explained that they don't serve the food sequentially as listed on the menu. Apparently when they get orders of any dishes, they cook up a batch and serve them to every table that ordered. Doesn't sounds like they have the capabilities of a real restaurant. Overall, the food was alright but not memorable. Even though I like the concept of foraging the wild for food, unfortunately some of the dishes weren't that great. I wished the fried baccala was softer and the meats more tender. The Hatchi Series hasn't impressed me all too much to date. Unless of course hottie Top Chef Michael Voltaggio makes another appearance...

If Michael Volt comes back, I would be the first in the reservation book! Though I suppose I could just go to the Langham. Bummer this meal wasn't better!