The birds rule over @ Rivera Restaurant 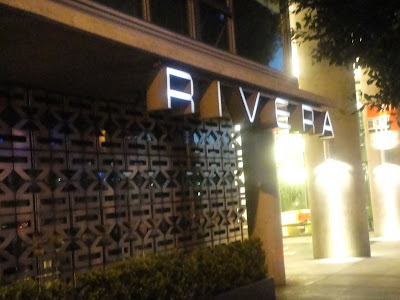 The last time I tried to hit up Rivera (on St. Paddy's Day), it was closed for a private party. I was a bit bummed so I made sure to get a reservation this time. Monday also happened to be the Black Eyed Peas concert at nearby Staples Center, so the restaurant was bustling. Apparently we were one of the few at Rivera that was not attending the concert. Guess we are not that hip. 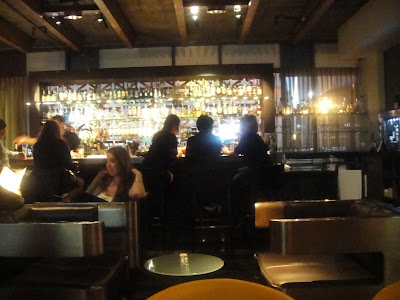 The bar area is sleek and opens into the main dining room with modern chandeliers, right by a charcuterie bar and open kitchen. 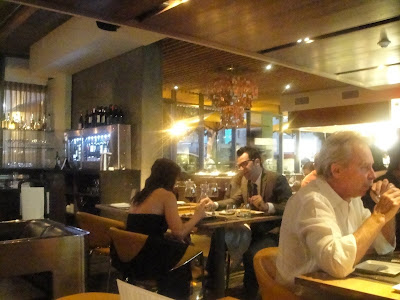 Our host initially seated us in the other more formal dining room with white table cloths on the table but we opted to sit outside in the less stuffy main dining room. It's also a better spot for people watching. 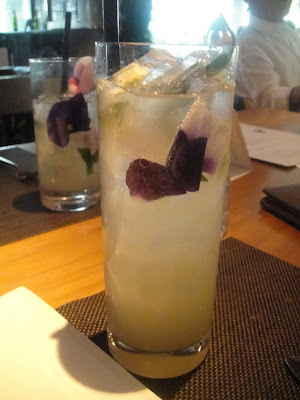 First up, cocktails. Rivera is known for their cocktails. We ordered the Purple Rain which came with a choice of vodka or gin base, with violette, ginger, Thai basil and soda. It was very good, strong but tasted good going down.

The cuisine is mainly Latin influenced and the menu is broken out between small and large plates. We decided to try a couple small plates to share between us two. That way, we were able to get more variety without being stuck with a large heavy dish each. 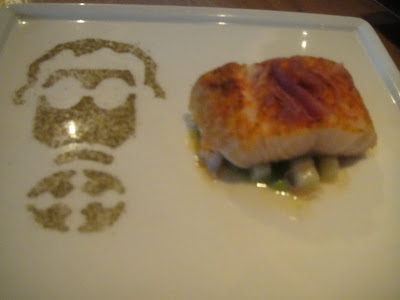 Bacalao negro fresco (seared black cod with Serrano ham crisp)
The plate was imprinted with spices in the form of a gas mask- not sure what the symbolism was. Under the cod were jicama tasting logs. The fish was cooked really well, on the slightly rare side, however it was bland. I dipped it in some of the salsa and spices but it still didn't work for me. The flavors weren't being absorbed by the fish. Such a pity because the fish itself was soft and buttery. 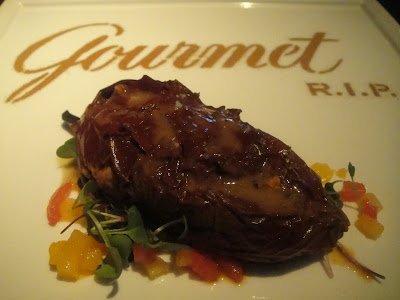 Chile pasilla rilleno (pickled mild chile, burrata cheese, served chilled)
Really disliked this dish. The chile had a overly sour and bitter skin to the point of it being inedible. The burrata was also not what I expected. It had a horrible consistency and didn't seem that fresh. I took a bite of this dish and was unable to take another one. 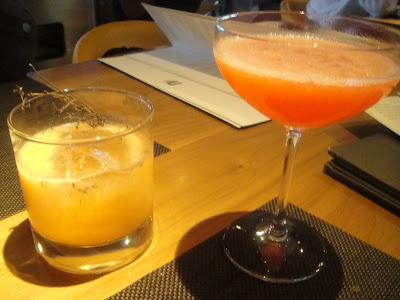 We ordered another round of cocktails. Sexy Thyme (gin, aperol, orgeat, golden raspberry and thyme). I thought the thyme was a bit strong but the cocktail otherwise was fine. The other was a concoction prepared by the bartender which I requested vodka and raspberry as the main components. He made a Raspberry Gimlet. It was strong and tasted like lighter fluid. I never usually waste alcohol but I couldn't get it down. 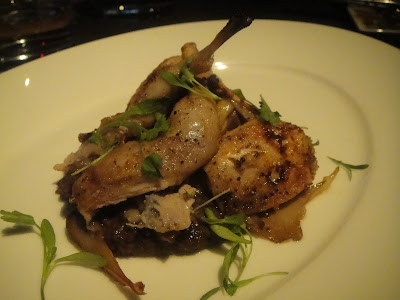 Cordorniz cubana (grilled quail, black beans)
The quail was tender and the skin kept the meat moist. There was a generous potion of two whole legs and the bird was well seasoned. I thought the black beans were delicious with a bit of spice. It had a pasty texture and had loads of flavor. 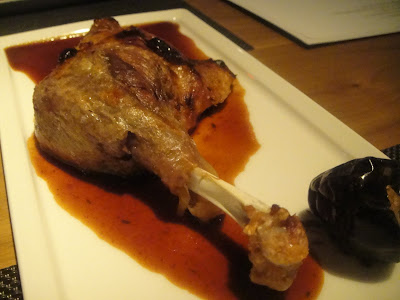 Pato al vino (duck confit, rioja reduction, cascabel chile)
I enjoyed the duck as well. I liked the crispy skin and the tender meat. The cascabel chile was dry but a little bit went a long way. It added a nice spice to the duck. The sauce on the plate was all the duck really needed.

I liked the meat dishes, both were well executed and flavorful, and served with the right components. The first two dishes unfortunately were disappointing. I thought overall, the food was decent, but I wasn't blown away, given all the raves about the restaurant. I do think however, that it would be a great after-work or pre-Staples joint. They also have a late night happy hour (hello?!? You know those are my favorite) so that could be an option as well. But for me, given the distance from home, I'd probably not be back again if just for dinner.

I keep hearing very mixed reports on Rivera - it seems to be the type of place where the experience depends on which dishes you order. Sort of like mining for gold in the menu!

yes Diana, think we went the wrong route with that chile relleno. yuck.