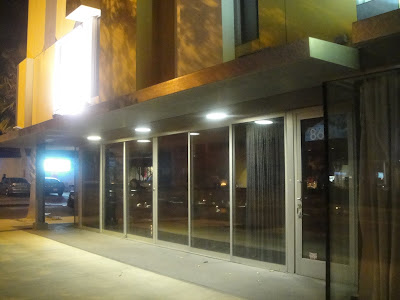 Located a couple blocks from the Helms Bakery and Father's Office in Culver City, the new Sublime Food Lounge took over the spot of neighborhood gem Wilson. Because the location is in a quiet part of Culver City, there's ample street parking (meters run until 6pm). The outside of the restaurant is simple with no signage. 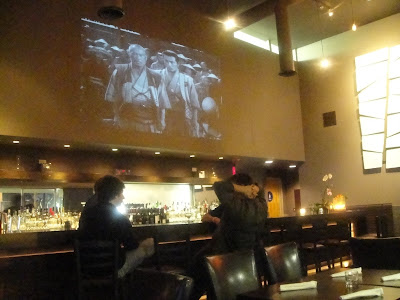 There is a dining room and an outside patio. Since it was a rather cold night, we opted for indoor seating. I liked the decor - high ceilings, exposed vents, modern artwork on the walls. Chef Randall Rosa used to be in the film and TV business so he has merged his love for food and films together by projecting film noirs on the wall. Kurosawa's Seven Samurai was playing the night we were there. Music selection is pretty good as well, with Radiohead and Bjork playing in the background. I like the vibe. It's cool, hip but yet casual. 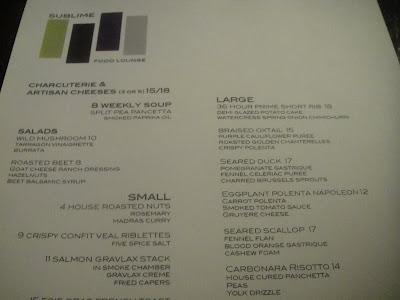 The menu is pretty simple, comprising of small and large plates, and a few flat breads. They also have happy hour Tue-Fri from 4-6pm and offer a late night menu until 1am. Even though there isn't much of a nightlife scene in the area, they want to make it a destination point where diners can stay and hang out all night in a comfortable and casual setting. 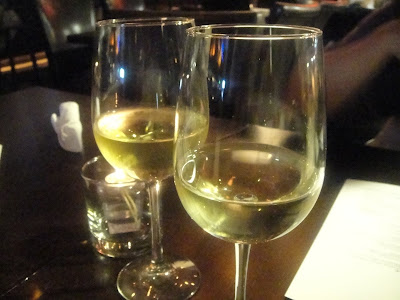 Glass of Malvasia and a Chilean Chardonnay were reasonably priced at under $9. It's refreshing not to have to pay $15 for a glass of wine. 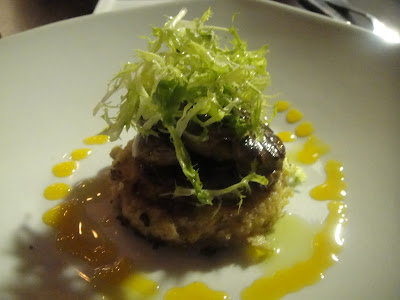 Foie gras french toast, passion fruit syrup, onion marmalade on brioche
This was divine. The foie was pan seared which BTW is apparently not how the French like to eat foie, most like the terrine. The foie was rich and lightly salted and sat on a buttery brioche that absorbed all the flavors. The sweetness from the syrup worked well with the foie. 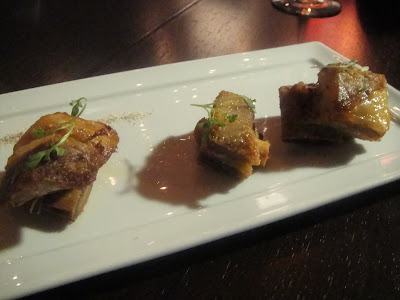 Crispy confit Veal riblettes with five spice salt
This reminded me of Chinese spare ribs. The riblettes had a nice fatty piece and was crispy on the outside. The five spice salt was sprinkled on the side of the plate so you could adjust the amount of seasoning based on your preference. I enjoyed this dish but felt that I could have gotten this at a Chinese restaurant, although it would probably be pork over veal. 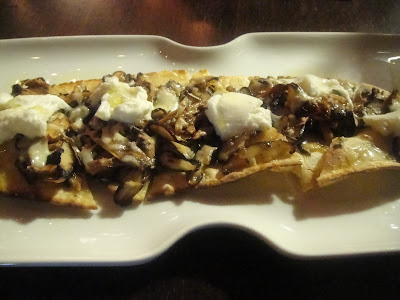 Wild mushroom flat bread with burrata
I really enjoyed this. I don't get to eat much of pizzas and flat breads because of the cheese factor, so when I saw this on the menu and it was served with burrata instead of heavy, oily mozzarella, I had to get it. Yeah.. I know.. burrata is cheese.. but somehow it doesn't taste like cheese so it's tolerable. The wild mushrooms were well seasoned and smelt buttery and delicious. There was also a generous portion of mushrooms. The burrata was fresh and buttery, unlike the one served in the chile relleno at Rivera that I tried to consume the night before. I also liked that the flat bread was really thin so it wasn't a heavy dish. 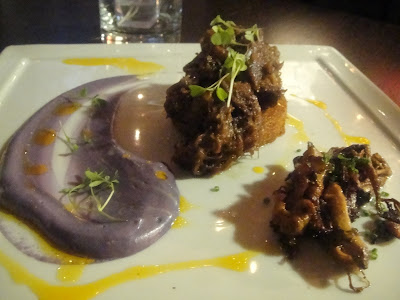 Braised oxtail with purple cauliflower puree, roasted golden chanterelles and crispy polenta
Everything on this plate was exceptional. I really enjoyed the cauliflower puree which was sweet and creamy. The mushrooms added a salty, earthy flavor. The polenta crust was lovely. It tasted like a hash brown, soft in the center, crunchy and oily on the outside. The oxtail was shredded, tender and flavorful. Every component of the dish was mouth watering. Really well executed but it was also rather heavy so I'm glad we shared the dish.

After our savory course and another round of drinks, our waitress brought by the dessert menu. 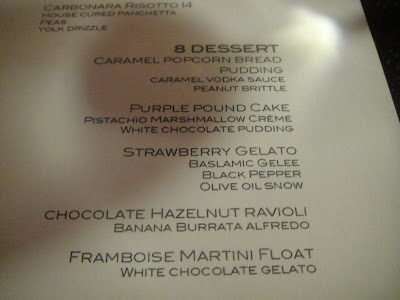 Even though we were full, the desserts looked interesting. Although I love me some creme brulee and panna cotta, I was glad to find them missing from the menu. 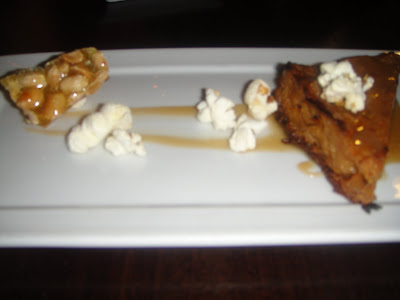 Caramel popcorn bread pudding with caramel vodka sauce and peanut brittle
The bread pudding was scrumptious. I enjoyed the layer of crust at the bottom of the pudding and the sweet caramel sauce drizzled on the pudding.

Sublime Food Lounge really won me over. I liked the ambiance. The projector was a nice touch - old, artsy, black-and-white films projected on the wall is a perfect date setting. The food was solid, and it cost the same as Rivera the night before (at about $130 in total for 2 people and four drinks total) but I thought the food at Sublime was way better. The foie was my favorite dish of the night although the rest were trailing closely. The portions weren't huge but it was sufficient as the dishes were heavy, which really proves the importance of quality over quantity. This is the kind of place that I'd want to come back to, and recommend to friends. This is the type of place that would make a great neighborhood joint and late night grubbing spot.