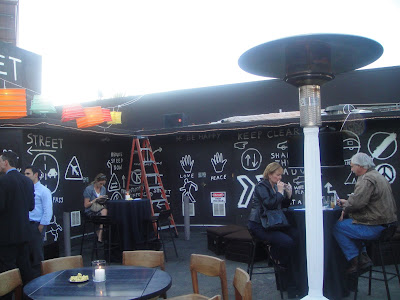 I love watching Top Chef. I've watched every episode of every season many times over. I can't say no to the reruns or marathons. I've been known to stay up watching the marathon reruns until 2am even if I have to surf at 5.30am that morning. I love Top Chef Masters perhaps a tad better. Why? Because the contestants are doing this for their charity of choice instead of pocketing the winnings. Because the contestants are award winning chefs that own reputable restaurants around the country, fortunately for us, some of which are based in LA. Because instead of the cattiness among contestants or occasional hook-ups, these mature, more refined chefs are for the most part, humbled to be competing with their peers- they are all so good natured throughout the competition. And because they are pretty darn good at cooking!

Susan Feniger was throwing a Top Chef Masters Viewing Party at her restaurant Street, proceeds from the $25 fee went to her charity Scleroderma Research Foundation. $25 for open bar, appetizers, and charity? You really can't lose. Feniger is one half of the popular TV duo "Two Hot Tamales". Together, she and her business partner Mary Sue Milliken went on to open up restaurants all over town including CITY, Ciudad and Border Grill. Street is Feniger's latest solo venture. I like the concept of Street: Global focused and serving upscale street food. I grew up in the street food/hawker center mecca of Singapore so I know all about that. It's about casual, flavorful, variety, small portioned bites which Feniger adds her spin to. Take for example the popular kaya toast, a coconut jam spread on toast which is a popular breakfast item consumed in Singapore. Feniger adds a soft boiled egg yolk, drizzles dark soy sauce and increases the price tag.

Street is located in Hollywood, a block away from Mozza. The cocktail party was held outside in the converted parking spot of the restaurant and decorated with lights and lanterns. 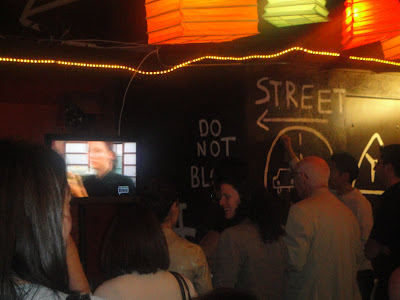 The reception started at 7pm and the show began at 8pm after Feniger gave a short speech to the crowd. Thankfully we got to the restaurant early and were able to score an awesome table. Very important because you gotta have a place to sit those many cocktails down. 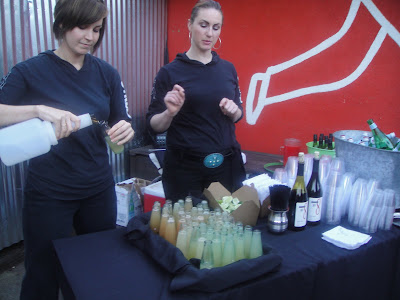 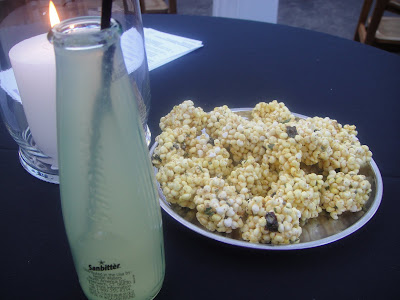 There was a plate of millet seed puffs with marshmallow, fennel, curry, coriander, cumin and black currants at each table. They were airy, puffy and had a nice savory sweet taste. 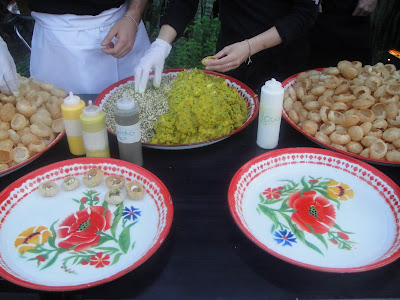 They set up a stand at the side of the patio where they prepared Paani Puri. 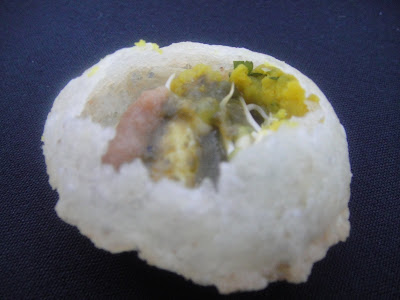 Paani Puri, spiced potatoes, chutney, sprouted beans in a crispy puff of dough dipped in yogurt cilantro water
I liked the potatoes which reminded me of one of my favorite Indian dish aloo gobi. I didn't care for the sprouts though as they tasted raw and I dislike raw sprouts. 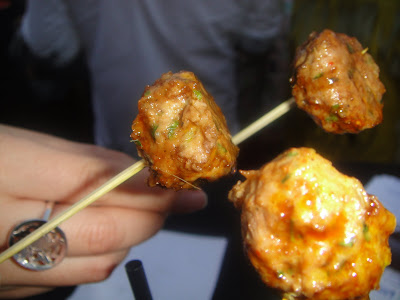 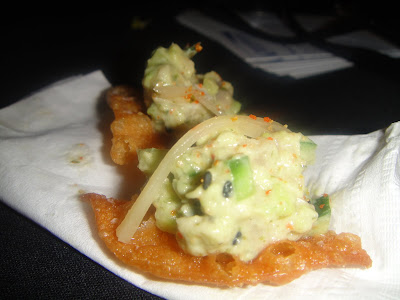 Ono poke with avocado and ponzu sauce on a fried wonton crisp. 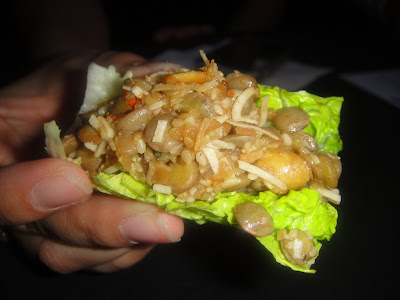 Burmese Lettuce, Gin thoke style lentils, toasted coconut, peanuts, fried onions and sesame ginger dressing
I really enjoyed this dish, possibly because I was famished at this point but also it's healthy and low carb! Not that I'm dieting.. but sometimes a little veggie never hurt anyone. It was a crisp and refreshing bite. 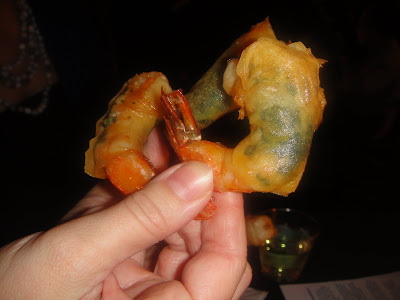 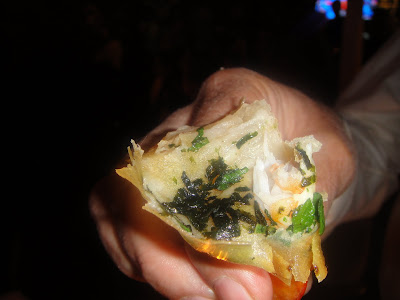 My favorite of the night. The shrimp was plump, I liked the seaweed and everything was wrapped in a nice thin crispy flaky dough, and deep fried! 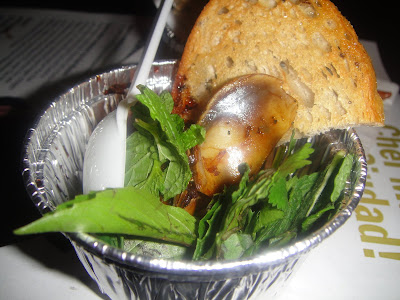 Malaysian black pepper clams with a crusty bread. The sauce was flavorful and great to dip the bread in. But not a lot of clams and an overkill of greens. 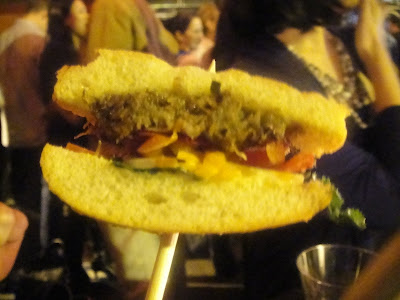 I thought the party was a great experience and am glad we attended. It was just a love fest all night and all for charity. The place erupted with cheer when Feniger won at the end of the episode. We also got to meet her. In fact, the lovely couple that shared our table were long time friends of Feniger so they introduced us. The party was lively, the food (if you were able to score some) were delicious and you know how I love little nibbles, we got to meet some great people who shared our same love for food and drinks. Only qualm was that the trays of food would be demolished by the time it got close to us. Vultures! Don't come in the way of hungry, alcohol induced people. Thankfully towards the end of the night, the waiter knew not to serve the people who positioned themselves close to the kitchen and instead made a beeline to the end of the patio to serve the hungry attendees who had been neglected. I only had a couple bites so I was starved by the end of the night. In fact, the only thing that was in abundance was the paani puri and alcohol so that was what I consumed all night. Not a bad night, I suppose. And a hungry gal = a good reason to grab another bite elsewhere :)

Hits: it's for charity, open bar, slider, shrimp
Misses: food rarely made it's way to us
Rating: **** for good times

I know Diana.. umlimited wine and specialty cocktails is already well worth it!!