Westwood getting it's own red rope @ Glendon Bar?!? 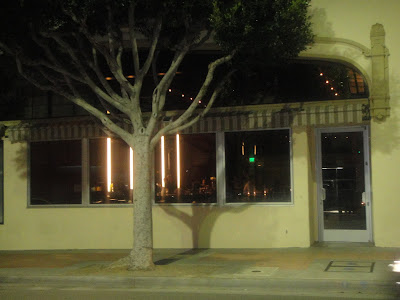 My friend LB and I have been closely waiting for the opening of The Glendon Bar & Kitchen, excited that another bar was opening up in the Westwood Village. Unfortunately their website still read "Coming Soon", their Facebook page shared practically no information about its opening and no one was picking up the phone. After the LA Beerfest, we went in search of some food and Glendon once again popped up on our minds. When we called to check if they were open, we were greeted by a perky hostess that excitedly advised us that the restaurant was open for business. Away our cabbie took us to Westwood. I wasn't exactly sure where The Glendon Bar was located but googlemaps on my iPhone seemed to indicate that it was located in the same spot as Westwood Brewco. Could it be?!? Glendon Bar took over the space of Brewco? I wouldn't be sad to see the latter shut down as I've watched its slow demise from a cool pub offering great selection of beers back in undergrad days, to a dirty bar with beers that seem to run out and crappy food options. But as our cabby passed Brewco, I noticed that alas, The Glendon Bar and Kitchen had not replaced Brewco. Instead, it was located right next to it, in the old Moustache Cafe that later turned into a sushi joint. 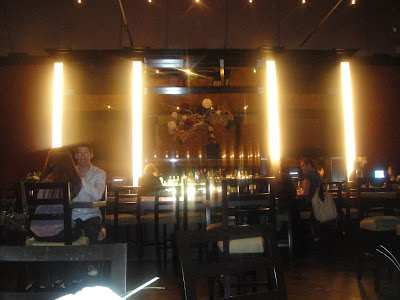 I liked the space the moment I stepped in. High lofty ceilings, a sleek bar and plenty of table and couch seating. It's chic, it's modern, it's sophisticated, it's what the wealthy Westwood residents (the ones living in the million dollar mansions, not the impoverish kids that live in student housing) would welcome. 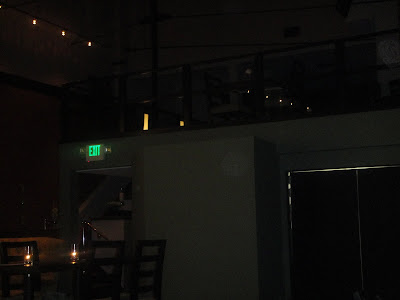 They have wooden tables with fresh cut roses in vases, leather banquettes seating, suede chairs and also a top loft perhaps for VIP seating. What seemed out of place was a couch that was positioned by the stairway to the loft. It seemed misplaced as it didn't match any of the other seats in the restaurant. 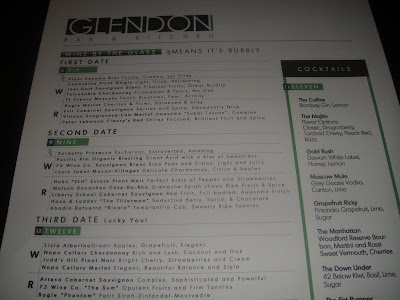 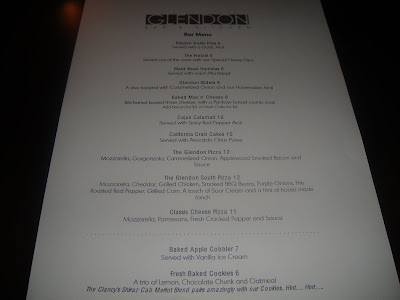 The menu is pretty simple with a bunch of bar bites ranging from $6-12. Cocktails are $11 which are much cheaper than what you would find in Hollywood. 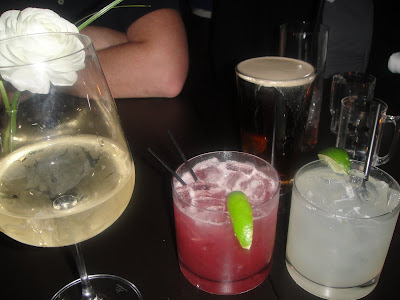 They have fun cocktails. Grapefruit Ricky (Finlandia Grapefruit, Lime Sugar) was the tastiest, Blackberry Agave (Cazadores Blanco, Splash of Chambord, Blackberry preserves, Lemon) was strong, pinot grigio was cheap at $6, and a Black and Tan that was lukewarm so we asked for another beer. 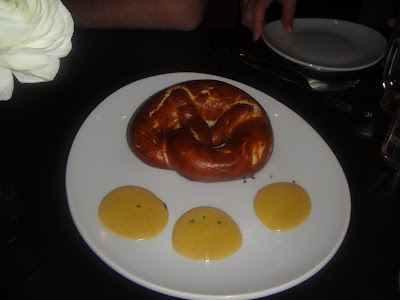 Pretzel was fresh from the oven. It was warm and lightly salted inside, crispy on the outside and served with honey dijon. Everyone at the table was impressed with the pretzel, and we are a good judge as we've tasted the real thing in Germany. 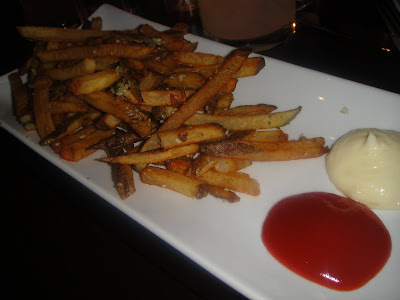 Belgian Garlic fries with garlic aioli.
The fries were crispy yet soft and fluffy inside. Garlic and spices gave the fries additional flavor. 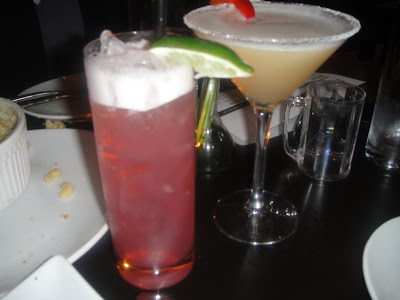 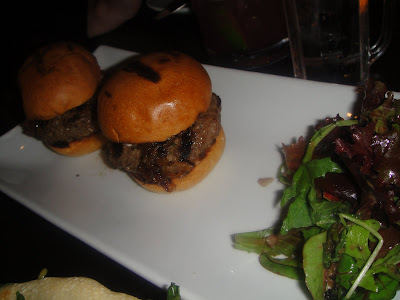 Glendon sliders with caramelized onions and horseradish aioli. The meat itself was juicy but the sliders were nothing special. 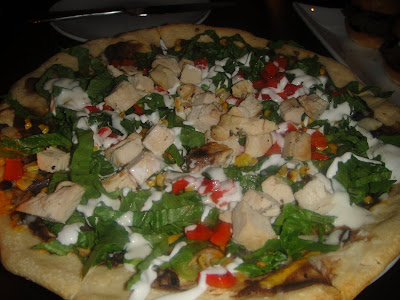 Glendon South Pizza with mozzarella, cheddar, grilled chicken, smoked BBQ beans, purple onions, fire roasted red pepper, grilled corn, a touch of sour cream and a hint of house made ranch. This was a cross between a salad and a 7 layer dip of some sort. I'm not a big fan of the salad pizza. I feel that every ingredient on a pizza should be cooked and warmed through. I didn't care for the sour cream and ranch on the pizza. They had no reason being there. Go back to the salad where you belong! 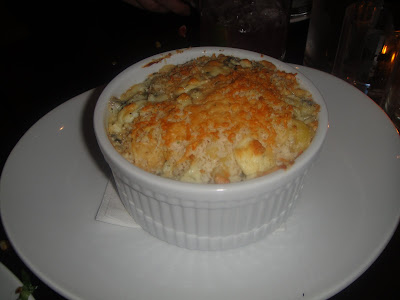 Baked Mac and Cheese, bechamel based three cheese, with panko bread crumb crust
I of course had to ask what the three cheeses were. Our waitress said it was Parmesan, gruyere, mozzarella. BTW, she couldn't pronounce gruyere. That was the 1st red flag. Secondly, really? Mozzarella in Mac & Cheese? Well, if you say so... The macaroni itself was cooked well and the crunchy panko crust added a nice crunch. The cheese sauce wasn't too creamy and had a hint of green chili pepper flavor in it that gave it some heat. Suddenly, someone in our party insisted that there was blue cheese in the dish. Noooooooo, we all insisted. Can't be. We couldn't taste it. But eventually, everyone took a complete bite and agreed. Apparently the bechamel itself didn't have blue cheese but it was definitely in the bread crumb topping. We asked the waitress again, she checked with the kitchen. Oops.. you are right, there was gorgonzola blue cheese in the dish. I was a bit put off by this. Granted I didn't take a full bite so I wasn't really affected by the pungent cheese, but that's an important and offensive ingredient to get wrong. The cheese definitely left a bad taste in everyones mouth, especially since most at the table didn't care for that type of cheese.

Apart from tricking us into eating stinky cheese, otherwise the food was decent although the menu was rather eclectic. It didn't seem as though they had found a theme to their menu. The dishes seemed to span over many cuisine, I felt like I was at a Cheesecake Factory. There was European (pretzel, Belgian fries), All-American (pizza, sliders, mac & cheese) and Southern (Tex Mex pizza, Cajun calamari). The menu also seemed limited as we had already sampled over half the menu in one sitting. When I made a suggestion to the waitress that perhaps they should include some sort of a chocolate dessert on the menu (they only offered an apple cobbler and fresh baked cookies), she said "Oh, I don't think I told you, but this is just a sample menu, we'll be offering a larger dinner menu in the coming weeks". Err.. that's pertinent information you would think she should have mentioned because we weren't really thinking of coming back since we had already tried most of the items on the menu. I know our server meant well but she was definitely a bit loopy that night. I do have to cut them some slack. It was Day 3 that they had been opened. They still have some kinks to work out. They definitely have potential. I'd be willing to come back to check out their new expanded menu. When we left, we noticed two large bouncers complete with ear pieces and a red rope at the entrance of the restaurant. Hmm.. I wonder if those wealthy Westwood residents (the ones living in the million dollar mansions, not the impoverish kids that live in student housing) would welcome that..