Finally, I was going to make it to The Surly Goat, a newish pub in West Hollywood. And even better, I was going with my friend J who is a beer expert and brews his own beer at home. I had been awaiting for the bar's opening but when it finally did, somehow I got distracted with dinners and BlackboardEats promotions. Unfortunately they currently don't have a kitchen at the bar but you are welcome to bring in outside food. Baby Blues BBQ is located right by The Surly Goat so we decided to combine beers and ribs for a night of fun. The original location of the BBQ joint is in Venice Beach. 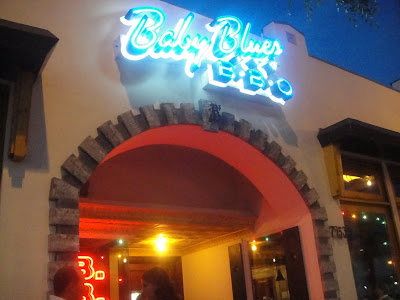 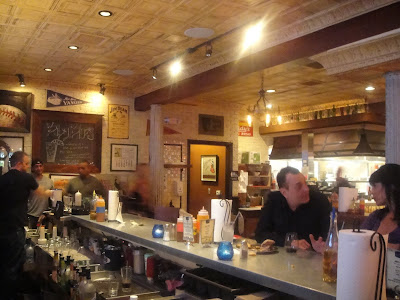 Initially we had planned to get takeout and eat at The Surly Goat but I was pleased to see that Baby Blues had its own bar section, so we decided to dine-in. They also have a sit down restaurant area if you prefer not to dine at the bar. 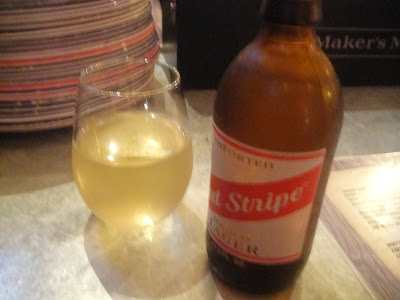 I knew I was going to be consuming a lot of beer after dinner so I started with a glass of wine. 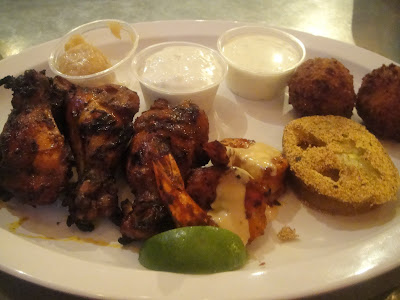 To start, we shared the tackle box which included 2 grilled shrimp, 2 hush puppies, 2 fried green tomatoes and 4 wings. It's a great way to sample a bunch of appetizers. The hush puppies were delicious and were even better when paired with the honey butter and cinnamon dipping sauce. I could have popped a bunch more in my mouth. The grilled shrimp was also delicious with a squeeze of lime and the creamy sauce that was to die for. The wings were pretty good too and were smoked and grilled. 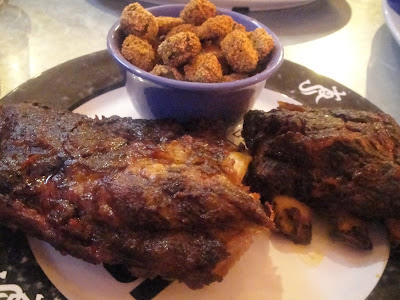 1/2 rack of Baby back ribs and a side of fried okra.
One portion of the ribs were actually pretty good, tender and had a nice fatty piece to it, however the other portion was dry. You can see, left = juicy, right = dry. So it was pretty inconsistent. Not the best ribs I've had (I like Houston's and Bandera's) but decent. They offer homemade BBQ sauces in plastic squeeze bottles. I really liked the fried okra which was breaded in cornmeal and seasoned with spices. 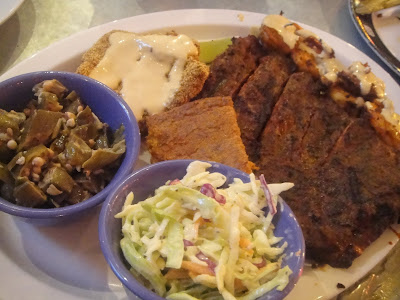 Ace in the Sleeve: Memphis ribs, catfish and shrimp combo with sauteed okra, cole slaw and cornbread
This was like the mother of all combos, you get your meats and seafood all in one. The catfish was perfectly cooked. The fish itself wasn't dry and it was breaded and fried crisp. The sauce was rich and delicious. There was more grilled shrimp like the ones from our starter so my fork made its way over to the plate to snag some. Love that creamy sauce on the shrimp. Wonder if they would package and sell it because I'd spread it over everything. The cornbread was interesting, it had an odd consistency. The okra was spicy and tasty. Unfortunately the ribs weren't that juicy although they were more tender than the dry half of my baby back ribs. The cole slaw was fresh but not standout.

It's interesting that for a place that has the word BBQ in its name, the ribs weren't that great. The sides and seafood rocked though. We also liked the ambiance. It was a fun, casual, southern bar. I'd return for a plate of hush puppies and honey butter sauce in a heartbeat. 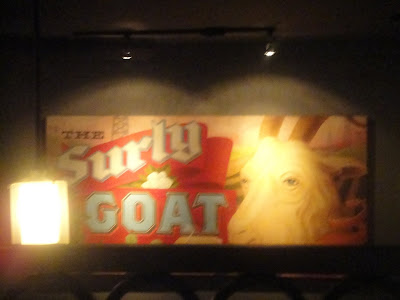 After our meal, we walked a few steps over to The Surly Goat. 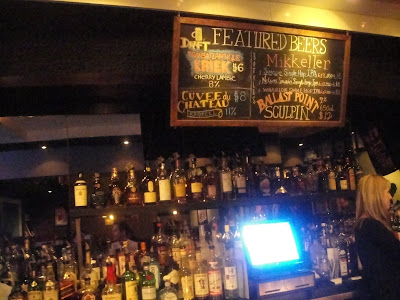 The Surly Goat is brought to you by Ryan Sweeney (Verdugo) and Adolfo Suaya (Boho) who carefully select and rotate unique craft beers and many local microbrews. Sweeney isn't just a self proclaimed beer expert, he's in fact a certified cicerone. Unfortunately, I wished he was working the bar because the two female bartenders didn't seem to be passionate or knew a lot about beers. They looked like they belonged in a scene-y Hollywood club. 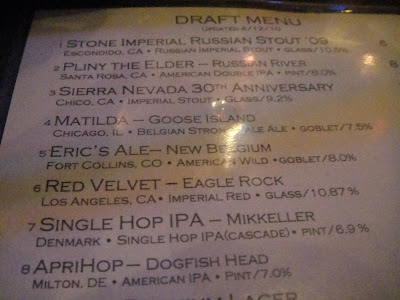 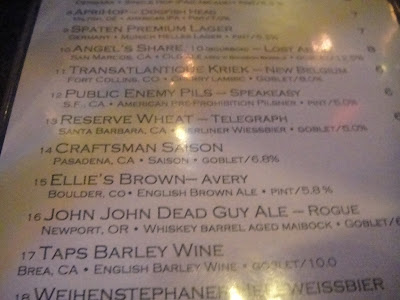 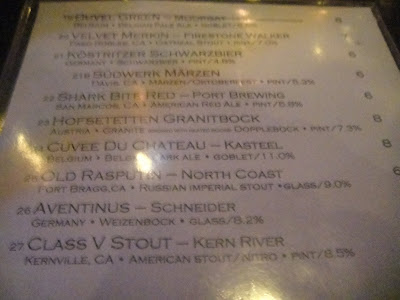 They have 27 beers on tap and a cask TBD. 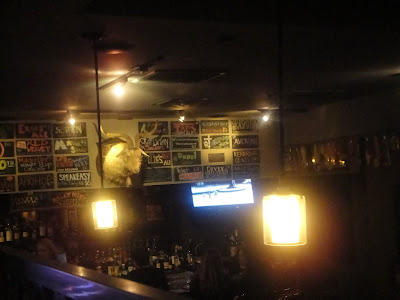 Stuffed goat head on the wall. 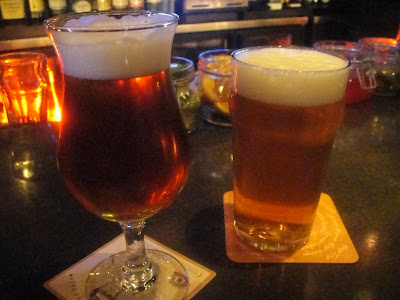 J got the Pliny the Elder from Russian River because he likes IPA, I went for the Craftsman Saison. 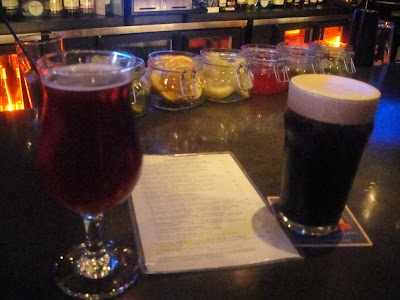 Next round, we ordered the Kern River Class V Stout and Lips of Faith Transatlantique Kriek (New Belgium Cherry Lambic). I sampled the Taps barley wine. Yuck, I didn't like. 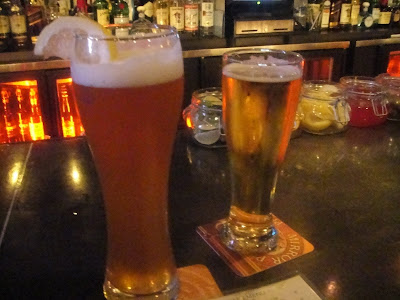 After a string of sweet beers, I went for the Wienstepaner Hefe and J got the Speakeasy Public Enemy Pilsner. 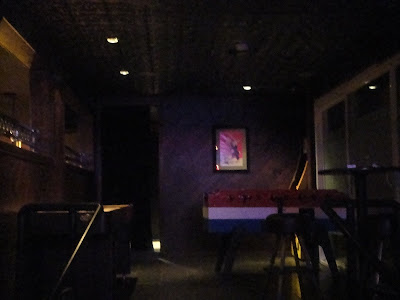 They had foosball and shuffleboard tables. Danger! 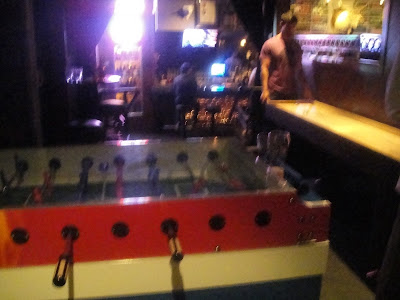 We ended the night with another round of drinks (I ended with a glass of wine, probably shouldn't be mixing drinks which explains the headache this morning). The Surly Goat is a fun bar. It's a great spot for beer lovers. I liked that there was a good representation of Cali beers. There were so many beers to try but so little space in the belly. We agreed that the beers at The Surly Goat were far more superior than the ones that were served at last weeks Beerfest. The prices were reasonable ($6-$8) given that they were offering high quality, artisan beers. I'd definitely be back although maybe next time I won't be playing shuffleboard until 1.30am on a school night.