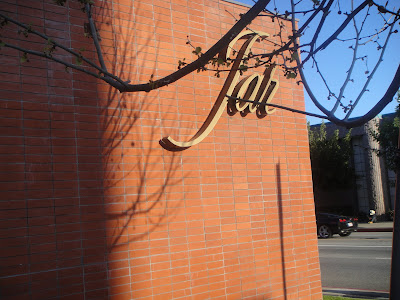 I heart BlackboardEats. I heart the geniuses behind the website that offers dining discounts to subscribers at no cost. I heart the restaurants participating in the program (all good and reputable, many of which are high-end restaurants). We used the discount last at Valentino and saved $100 off the bill. Once again, BlackboardEats was offering another 30% discount, this time at Jar Restaurant. Jar is an upscale chophouse that focuses on all-American comfort food primarily steaks. They apparently also have a great brunch menu. I've been there once before but my girls hadn't, so we decided to take the opportunity to use the discount while checking the restaurant off their list. I had previously ordered the pot roast which was delicious and is one of their specialties. Jar is owned by Chef Suzanne Tracht who has worked at Campanile, and was recently a contestant on Top Chef Masters. Tracht has been working on an Asian concept outfit called Suzpree and has been testing out menu items at the bar at Jar on Tuesdays - Thursdays.

Unfortunately, the interior of Jar has that dated elk lodge look. It's brown themed with wood panelled walls, and looks like they are stuck in the Brady Bunch era. Thankfully this did not deter the diners. The 30% BlackboardEats discount seemed to draw a large crowd on a Monday night, mostly younger diners.

My friend Heather and I decided to meet up earlier to grab a drink at the bar to catch up. 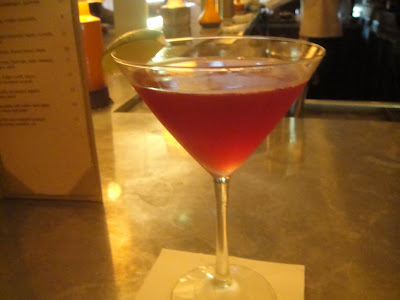 Bug juice (hangar one ‘fraser river’ raspberry vodka, lychee juice, pomegranate juice and fresh lime). I didn't care for this drink as it tasted like cough drop. Looks like it too. 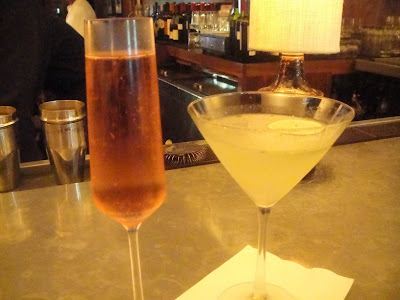 For our next round of drinks, we ordered a Rose and a Clean & Serene cocktail (Vodka, fresh lime, simple syrup, fresh mint). Much better than the last.

It was also Mozzarella Monday at Jar where a special menu was served at the bar. 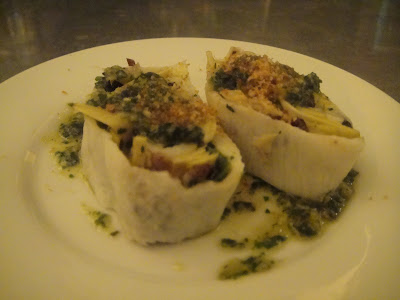 Our bartender brought over an amuse bouche which I thought was a nice gesture. Burrata, braised artichoke hearts, currants, and olive oil.

Since we still had 30 minutes to kill before the rest of our party arrived, we broke down and decided to order something from the Mozzarella menu. 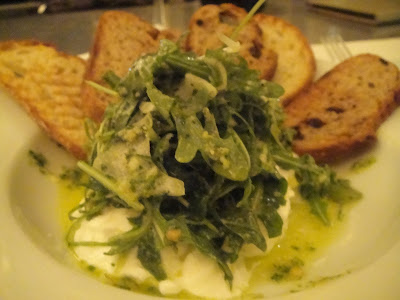 Stracciatella with celery herb salad and celery leaf pesto
I was a bit confused initially as Stracciatella is also a chocolate chip gelato flavor. Sorry, no chocolate here. Just lots of fresh, soft, buttery mozzarella. That's the same creaminess you would find inside a burrata. This was a delicious starter and a good way to get in our greens and calcium.

Shortly after, our party arrived and we were seated in the dining room. 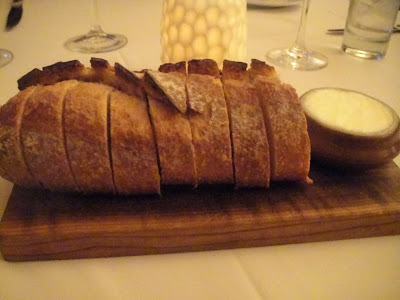 A loaf of bread was served. It wasn't warm but it was crusty outside and soft inside. 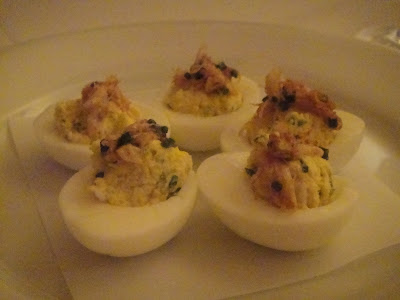 Crab Deviled eggs
It had mustard, pickle and horseradish (all 3 things I abhor so I didn't taste it). The girls said it needed more of a punch; either more horseradish, or additional spice or sourness. Also they couldn't taste the crab. Reviewers online seemed to like it but our table was unimpressed.

We ordered an entree each and two sides, which took a long time to get to us so we kept ourselves busy by observing the table beside us that included a pretty animated blonde, a shy awkward brunette and a guy. The girls seemed to be vying for the attention of the guy, with the blonde mainly monopolizing his time. The conversations seemed to play out from scenes of The Truth About Cats & Dogs. At least this kept us entertained until our entrees finally arrived. 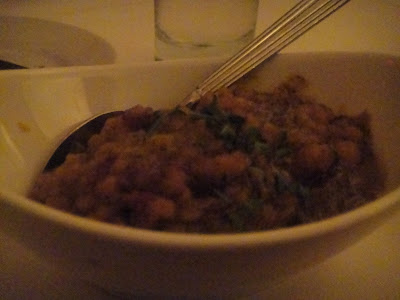 Kabocha squash with leeks, sage and medjool dates
Delicious! And healthy too, I hope. The squash had a pureed texture and the dates added a rich sweetness to the salty dish. 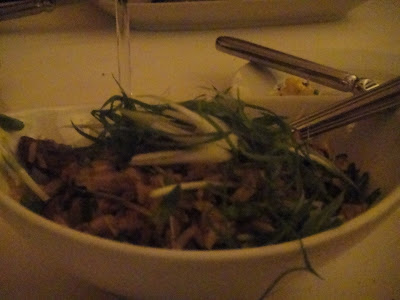 Duck fried rice
I had ordered this the last time I was here and loved it. It was still good, flavorful but you couldn't really taste the duck, and in the dim lighting, could barely see it as well. Additionally, the portion was rather small. For $9. For rice. 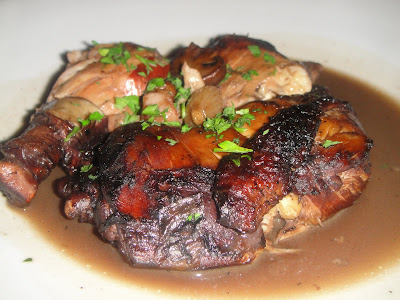 Coq au vin with applewood smoked bacon, pearl onions, crimini mushrooms in a wine sauce
There were quite a generous portion of chicken, and they were all tender pieces and fell off the bone. The mushrooms were sparse though. The dish had the right amount of seasoning with a bit of sweetness from the wine. I just wish they served this in a smaller bowl or in a pot, instead of a shallow dish as the sauce was spread all over the plate instead of covering the chicken. 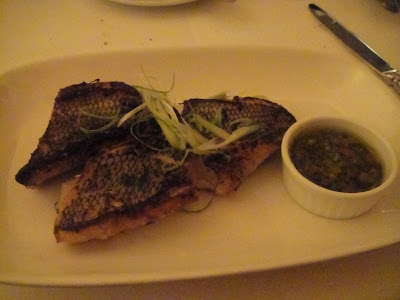 One of the specials of the day, grilled black bass. The seabass was cooked well but the plate looked boring and uninspired. 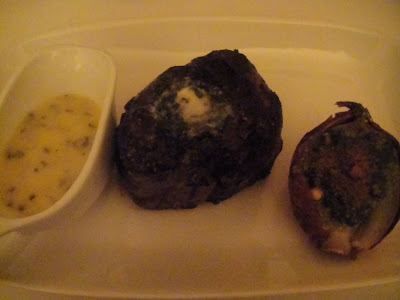 Prime Filet of beef with lobster bernaise sauce
There was a lot of beef (10 oz). The steak was perfectly cooked medium rare and buttery. I was quite impressed with the execution of the dish as the filet wasn't dry. I also liked the rich lobster bernaise that made this dish more decadent. 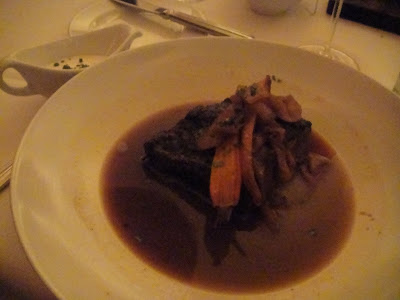 Jar's signature pot roast with carrots and caramelized onions
Also a well executed dish. The meat was tender and flavorful. I can see why this is a popular dish at Jar because you can easily mess up pot roast if the meat is tough but this beef must have been cooked slowly and for a long time in order to break down the connective tissues in the meat. When I first saw the plate, I thought the portion was tiny, but this dish was heavy and most definitely sufficient.

The bill came out to $220 (we saved about $90) which included 5 cocktails, a bottle of wine and the mozzarella starter that we had at the bar. I thought it was a great deal considering prices at Jar aren't cheap, at $38 for the steak and $39 for the bass. You can see why this is an upscale American comfort food joint. The meats were prepared really well and seemed to be cooked with soul. The menu items were simple. You won't find pork belly, foie gras or sweetbreads here. It's not exciting. It's not sexy. It's just simple home cooking.

Does Nancy Silverton do Mozzarella Mondays for Jar? Those two mozza dishes look very very similar to the ones at Osteria Mozza!

Wait a second, was this from this past Monday? Because I was there too with LA&OC Foodie and others.
Not that I know what you look like so I wouldn't know anyway but .. :P

Diana: wouldn't THAT be awesome? Silverton and Tracht together. They used to work together at Campanile so maybe they share recipes too!

Burumum: Yes, this past Mon! I HOPE that wasn't you on the 3 way "date" hahahah. ooops. We were a table of 4 gals (two blondes, two asians) towards the center back of the room. How funny! Hope to meet you in person someday!

lolz. burumun definitely ain't blonde, so no menage a date for her.

I'm probably gonna hit this up for dinner sometime next week (perhaps on the last day). Fillet is such a tame (tho extremely tender) cut of beef, so I'm thinking Rib-eye instead. MozzMonday is fun, but gets $$$ really soon.

SinoSoul - Yeah I hear ya! $12 for a small bite of mozzarella will add up quickly! Looking forward to your review.