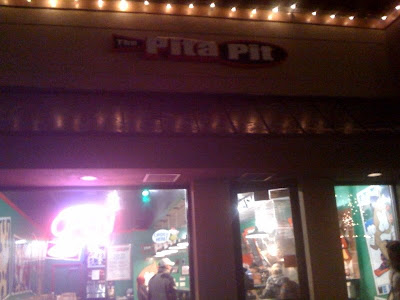 The Pita Pit has never interested me even though it's the popular late night post-bar hangout in Mammoth. When I think of pita, I think of Mediterranean food. When I think of Mediterranean food, I think of moussaka. When I think of moussaka, I think about my trip to Barcelona seven years ago when my sister, who was living there at the time, brought me to her favorite neighborhood restaurant where I got sick off of moussaka. That's how my mind works- a series of bizarre associations. The moussaka itself was fine (my friend actually finished it off) but somehow the bechamel sauce made me nauseous. So yeah, as a result of this incident, I've never been a big fan of Mediterranean food. I know that's very narrow minded of me. Mediterranean food does not just mean moussaka. There are a lot of things in the broad overarching cuisine that I can eat and would enjoy, such as meats, grilled octopus etc.
The Pita Pit is essentially a fast food joint that offers healthy and fresh food options. After hearing my Mammoth condo mates rave about it, I decided to give it a shot. But not for late night gorging though. I planned to grab a pita for dinner. This location is open until 2am while the closest one to me in LA at Hermosa Beach is open until 3am on the weekends! They sure are doing a great job of hitting their target demographic by setting up locations near bars and college campuses. 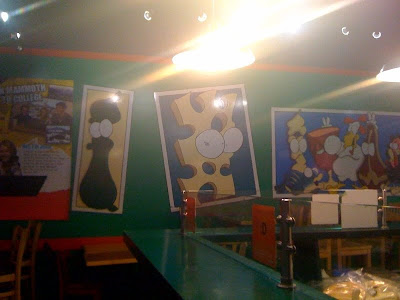 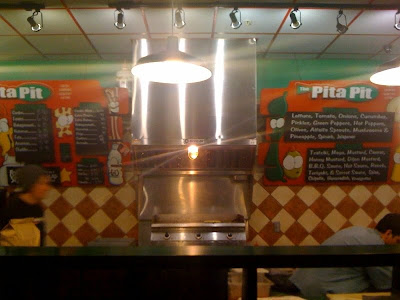 It's pretty festive, even a bit cartoonish inside. It's also clean and simply laid out. 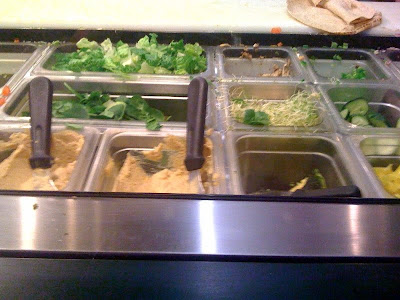 There are a lot of topping and sauce options. I didn't even know about their health-conscious value proposition until I stepped into the store and read the menu. Somehow I always assumed they served greasy, fatty wraps which was part of the appeal to the hungry drunks leaving the bars. The topping selection was vast and included babaganoush, cucumbers, sprouts, hummus, pineapples, avocado among others. 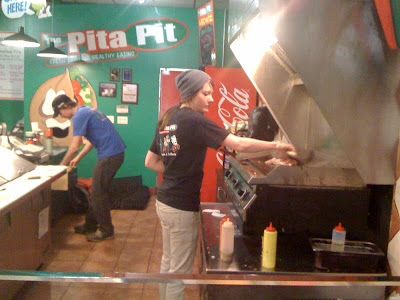 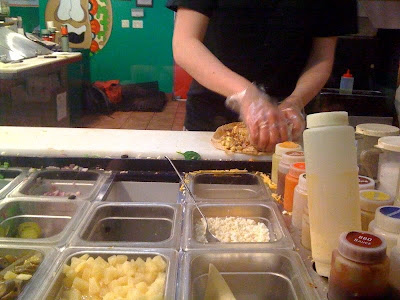 You can create your own pita wraps or choose from an existing menu and add additional toppings. They'll cook up your items on the grill, then assemble with fresh toppings and wrap it up in a pita. I liked that they offered wheat pita as an option. 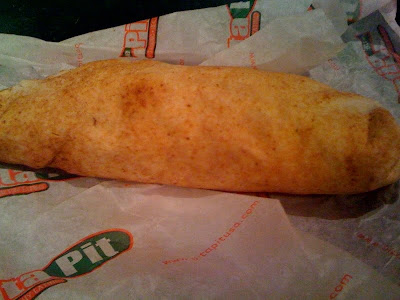 Because I am a sucker for breakfast items (hello french toast, hash browns, Micky D's Sausage McMuffin with egg), I was pleased to find that they offered their breakfast pitas all day. I went with the Ham & Eggs on wheat, which turned out to be a pretty large sized pita. 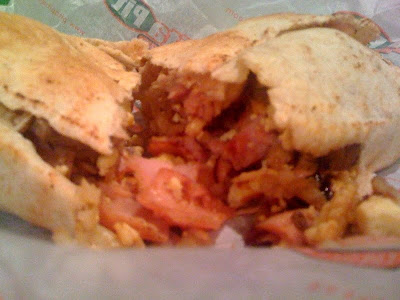 The pita was stuffed with scrambled eggs, black forest ham, hash browns, grilled green peppers, onions, mushrooms and any other toppings, cheese and sauces you desire. I went sans cheese, peppers and sauce. I didn't add any sauce because I don't usually eat my breakfast with sauces such as salsa or hot sauce. The pita was actually pretty darn good. I love eggs, ham and hash browns, and it was great to have the three wrapped up in a neat tight package. The ingredients tasted fresh and weren't doused in oil. It was good to see that breakfast food need not be greasy.

I was pleasantly surprised with The Pita Pit. I liked the selection of healthy ingredients and that you could pick as many as you liked. I can see why it would make a great 3am drunken gorge fest. Thankfully the food isn't too heavy or greasy, so you won't feel sick after consuming and it definitely is good healthy fuel to get us ready for our obligatory Saturday night bar hopping in the Village.

Hits: healthy options, opens until 2am
Misses: no location close to the Westside
Rating: ***

looks like a great place to eat after you sober up.

hey sis, stop dissing one of my fav restos in BCN!

bagnatic- definitely! who won't want bacon and eggs after drinking!

sis- i do have to admit.. maybe it wasn't the moussaka but rather the hangover that made me sick..