Singapore's Banana Leaf: You take what you can get 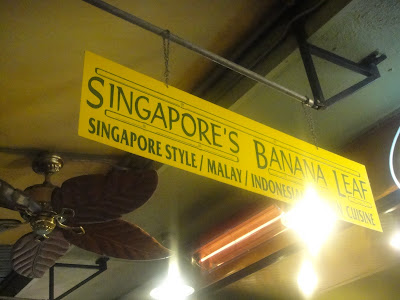 We decided to get a group together for some Singaporean food and since we refused to make a far drive, Singapore's Banana Leaf at the Original Farmer's Market/Grove made the cut. I've been there a couple times before. It's decent, it's not the most authentic Singaporean food around but it's better than driving east to Yazmin or Savoy, or purchasing a $1500 plane ticket to Singapore to eat the real thing in the sweltering heat and humidity. Sometimes, it's OK to compromise.

Singaporean food is diverse, just like it's people. There are very few solely Singaporean dishes. In fact, the country draws its influence from Malay, Indian, Peranakan and Indonesian cuisines. The best way to describe Singaporean food is that it is typically flavorful, spicy and cheap! And the best way to experience it is in hawker centers in Singapore. Hawker centers are open aired markets that house food stalls, each specializing in a couple dishes. There aren't many of these in Los Angeles but the Farmers Market comes close, which makes it a perfect location for Singapore's Banana Leaf. The Farmers Market offers something for everyone cuisine wise, but it can be a bit touristy with jacked up prices.

I decided to meet up with friends for drinks before dinner. 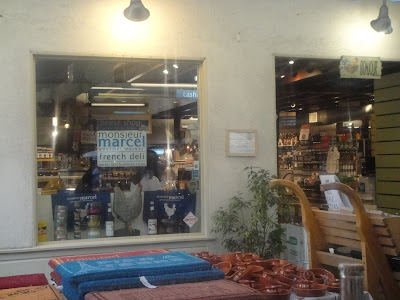 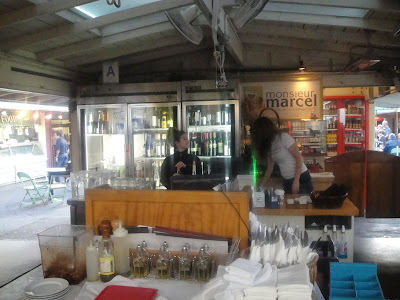 We grabbed seats at Monsieur Marcel which had both a gourmet store and a cafe. The food menu looked pretty darn good, offering French bistro fare including coq au vin, mussels and duck. But we would have to save that for another day. No, we had to stick to our Singaporean dinner agenda.

Happy hour runs 3-7pm which includes a snack menu and 1/2 off wines, which unfortunately does not include bubbly. 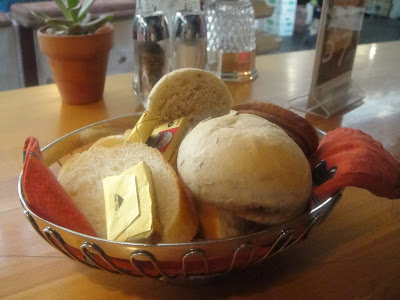 Bread was nothing special but good to line the stomach. 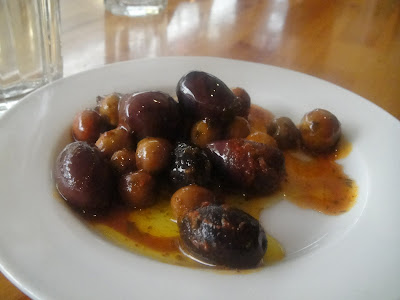 Our waitress brought over a plate of olives. 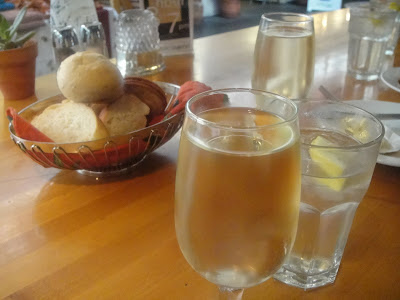 We ordered pinot grigio which came out to $4 after the 50% discount. Such a good deal that I had to order another one before the clock struck 7. 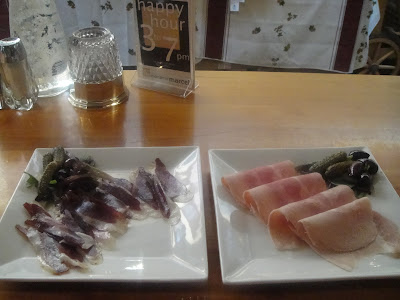 Two orders of charcuterie. Duck prosciutto and Truffled ham.
The duck prosciutto was a bit on the greasy side and you could taste the gaminess. It's not for everyone. I really enjoyed the truffled ham as the flavors were more subtle and a bit more refined. It looked just like regular ham and I could barely see any specks of truffle, however the rich, glorious flavor was definitely infused in the ham.

After our little bite and drinks, we walked a few stalls over to grab some more booze for dinner since Banana Leaf didn't serve alcohol. 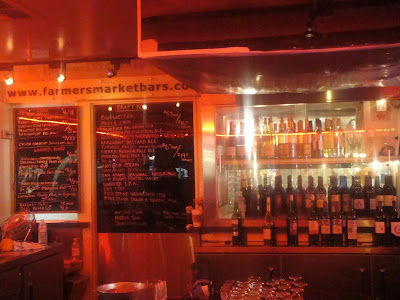 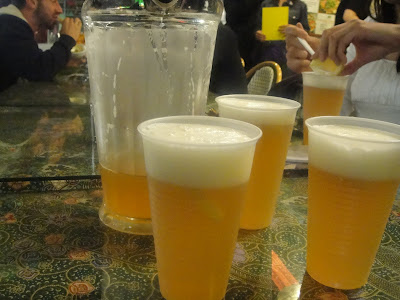 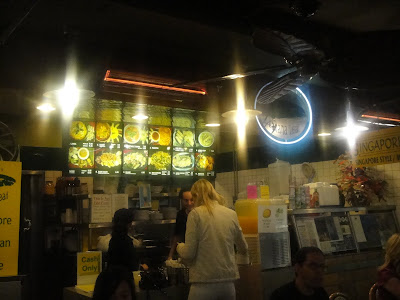 The stand is simple and in fact, reminiscent of one you would find in a hawker center in Singapore with pictures of dishes posted on the wall, plain tables and metal chairs. 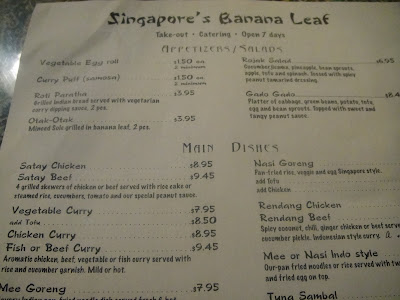 The menu has a few Singaporean fare but mainly includes Malaysian and Indonesian dishes, with everything priced under $10. Unfortunately some classic Singaporean dishes are missing such as char kway teow, chicken rice, sambal fish/prawns and chili crab. Deciding on an entree was a real task. Should I order mee goreng which was one of my favorite dishes as a kid, however I knew that I could get some pretty great Indo food at Simpang Asia and Indo Cafe in Palms. Do I get the traditional Singaporean dish Laksa? I knew I'd be disappointed since my mom makes a kickass one and she's only 10 miles away. 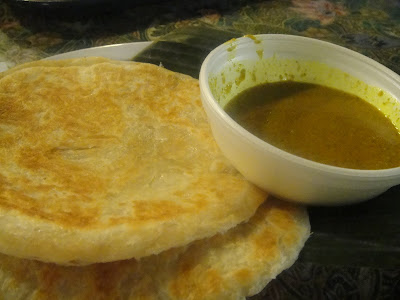 Roti paratha to start.
This is a common breakfast item in Singapore and includes pan fried dough pancake that is topped with vegetable curry. You can actually purchase the parathas at Trader Joe's or at 99 Ranch Market but I liked that the paratha here was freshly fried. Unfortunately, it was a little on the doughy side - I'm used to the thinner, tissue textured roti. The curry was also rather mild and not as flavorful as I had hoped. 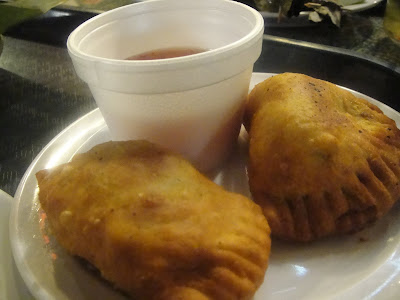 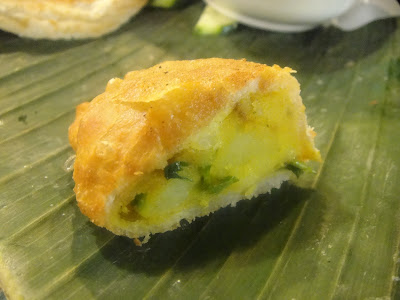 There were lots of potatoes and curry spices in the puff. There are different versions of curry puff and the one I grew up eating had a spicy beef and onion filling encased in puff pastry. Since this version tasted almost identical to samosas, I'd rather get them from an Indian joint. 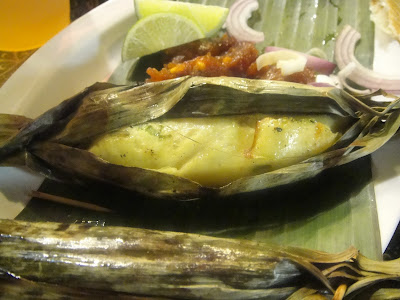 Otak otak is a spicy fish cake wrapped in banana leaf, steamed then grilled. This version was thick, cylindrical, light in color and rather bland. The Singaporean version I'm accustomed to is thinner, flatter and has a smokier and fishier flavor. A bit of a let down because it wasn't what I expected. 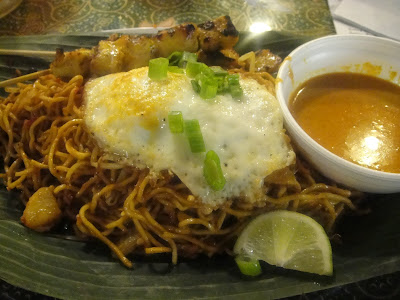 I decided on the Mee Goreng Indo style, which is essentially mee goreng with two satay sticks and a fried egg. Mee Goreng means Noodles Fried in Malay, and that's exactly what it is. It's fried noodles with potatoes and meat (chicken, in this case). At Banana Leaf, you can opt for tofu as well. The chicken satay was tender and served with a peanut sauce which I ended up pouring over the noodles. You have to squeeze the lime on the noodles as it really brings out the spices of the dish. I also ordered this extra spicy. You gotta do that if you want to eat as Singaporeans do. 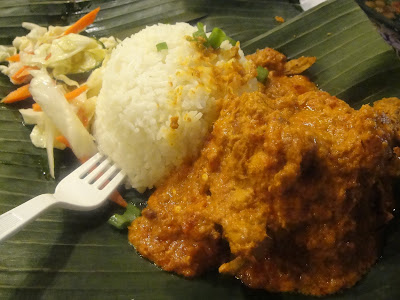 Chicken rendang. Rendang is a thicker, pastier type of curry sauce made with coconut milk and spices. Rendang is usually made with beef or mutton, not chicken. I have never had chicken rendang in Singapore before. This must be the watered-down, Americanized version of the dish. In addition, the chicken was all white meat and a little dry! Sacrilege! Singaporeans love their dark meat. Otherwise, the rendang flavors were pretty good and I would venture to say, rather authentic. 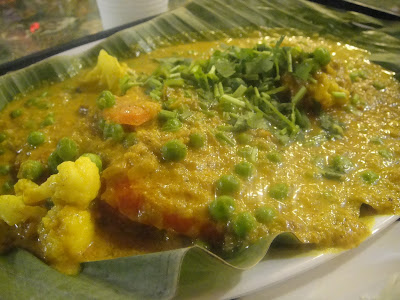 Fish curry with filet of sole, topped with tangy curry sauce. The fish was tender and cooked perfectly. However a more authentic Singaporean dish would be fish head curry, but some how I doubt that would do well at the tourist-laden Farmers Market. 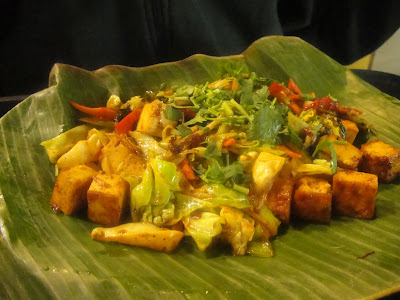 Vegetarian stir fry with tofu. Sorry, this isn't Singaporean. It just isn't. But I did like that the tofu was deep fried so it had a nice crust to it.

We had some in our party that weren't interested in Singaporean fare. GASP! We'll forgive them. They headed over to Pampas Grill, a Brazilian churrascaria. Apparently the line was long and we were almost done by the time they returned. We're also fast eaters, we're Singaporeans! 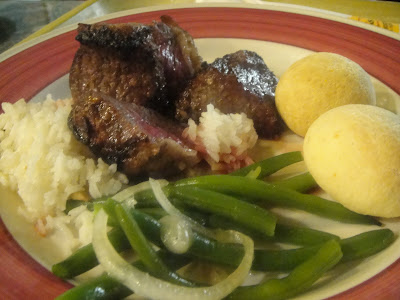 Garlic beef (Picanha ao Alho) with rice, beans and cheese bread (Pao de Queijo).
The meat was tender and cooked perfectly. I love the Brazilian cheese breads which were a bit chewy on the outside but soft and warm in the inside. 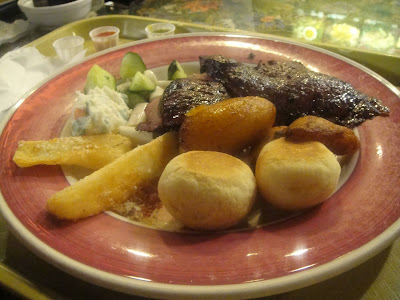 Top sirloin (Alcatra) and Sirloin Cap (Picanha) with cheese bread and yucca chips.
The meat had a nice charcoal flavoring and was also juicy. That's the great thing about the Farmer's Market, there is really something for everyone. I'm sure my friends enjoyed their Brazilian meats but I'd pick spicy, flavorful Southeast Asian food any time.

The flavors in the Singaporean cuisine are strong, unique and robust. It's nothing like Chinese food which a lot of westerners associate Asian food with. Unfortunately, the food at Banana Leaf was a little toned down. The curry for the roti paratha was bland as was the otak otak. And what's up with serving white meat as the standard?!? But I did enjoy the fish curry and the mee goreng. It's all relative, I suppose. Singapore is a melting pot in terms of its people and culture, so there are so many different ways of preparing the same dish. As such, a dish that I might not consider authentic, might hit the spot for someone else. So yes, I wouldn't consider the food at Singapore's Banana Leaf very authentic but honestly, this was good enough for me. I'd take this over nothing. It's also a great place to take someone who has never experienced Singaporean cuisine. Banana Leaf would be a great primer for that.

The Banana Leaf is the BEST!!! It is truly the best Singaporian food you will get in the US.

As for the idiot who wrote the original post.... Go back to Singapore! We don't want or need you in the US!

He is truly a F'n idiot... It's like an American going to Singapore, ordering a hamburger and saying it is NOT "In n Out"!!! DUH!!!!

Banana Leaf is GREAT food! and is definietly worth the trek through the jungle of LA to get there!!!