Facing your fears, then rewarding yourself with bubbly @ Bin 73

I had the weekend all planned out. Beerfest on Saturday, no late night drinking but instead much needed rest in order to face Sunday morning's drive to San Diego for skydiving. When the alarm went off at 8am, I jumped out of bed, brewed some coffee and was mentally ready to jump out of a plane for the first time in my life. We made a quick call to the skydiving company to check on weather conditions (there was a possibility that weather might be crappy down south) and to our dismay, there was a weather hold on all skydiving. Boooooo. What a buzzkill! I contemplated going for a hike instead since we were up so early on a weekend with no plans, which is a rare occurrence, but I'd already gone for a hike the day before. I wanted to do something different, something that would feel as accomplished as jumping out of a plane. I could ride a bike. I know, it's sounds silly. I snowboard, surf, have zip lined through the cloud forest in Costa Rica and kayaked down the rapids of Kern River. But yet, I have a serious case of bike-o-phobia. I'm not even talking about mountain or race biking. I'm talking about your regular ole beach cruiser.

But today I was ready to face my fears, so I met up with my girls and made it a beach biking day. We rented bikes by the pier at Marina Del Rey and made our way north. The moment I got on the bike seat, my heart skipped a beat. I wobbled around on the bike like jello during my pratice run around the parking lot. My bike was swerving around like it had a mind of its own. Ugghhh, I'm can be pretty (internally) competitive. I hate sucking at anything. I was lagging behind while my friends rode ahead but when we got to the end of the bike trail at Temescal Canyon and turned around for the ride back, I was finally getting my groove. We ended up accomplishing a 12 mile bike ride, not bad for my 1st time in 20 years. This was way more satisfying than skydiving, I think..

To treat ourselves for facing fears and getting a great workout, we decided to grab brunch and mimosas (of course) at Bin 73, a new wine bar by the beach. 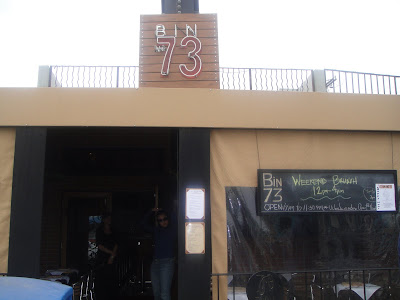 Bin 73 is located on Washington Blvd on the stretch that houses a bunch of other dining options including Venice Whaler, Cabo Cantina and C&Os. Parking can tend to be hectic on weekends if you aren't willing to pay the $10 beach parking fee. 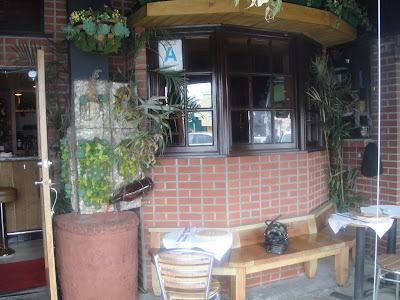 They have a quaint patio where we snagged seats. Bin 73 is owned by the same guys as the next door Mercedes Grill. It's pretty casual for a wine bar - they didn't cringe when I walked in with sweat pants, a sweaty wife beater and a ponytail. 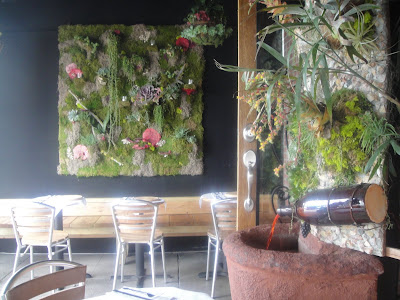 I like the wine bottle fountain that gave the patio a serene feeling. 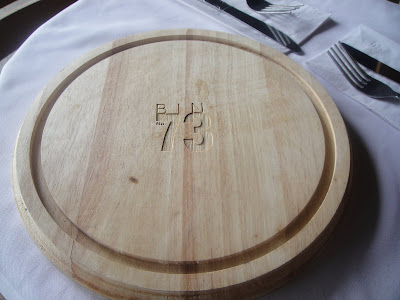 A wooden cheese board where our napkins were placed. 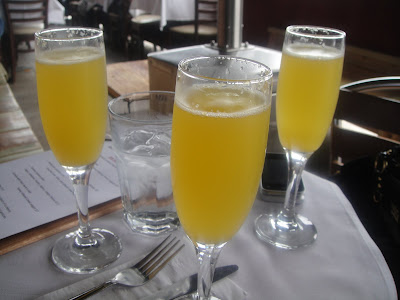 Mimosas were at a good price of $6. 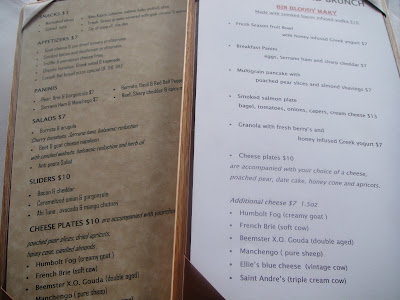 To be honest, the food menu didn't look that appealing initally. There were lots of cheese, panini and salad options. The only breakfast item that looked interesting was the pancakes. 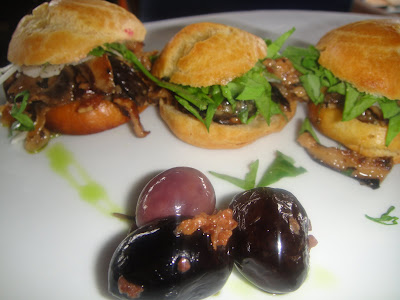 Smoked bacon and mushroom profiterole, with Manchego cheese.
The mushrooms were sauteed and well seasoned. The choux pastry was light and airy. I enjoyed these little bites as they were savory and a great way to start off the meal. 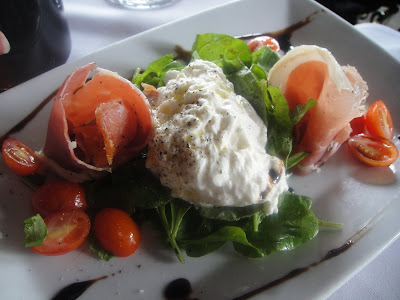 Burrata and arugula salad with cherry tomatoes, Serrano ham and balsamic reduction.
The Serrano ham was thick and fresh, and the burrata was creamy. The balsamic vinegar added a rich sweetness to the salad. I don't usually care to order salads at a restaurant but this was simple yet rich and wasn't your normal, boring salad that screams that you'e on a diet. 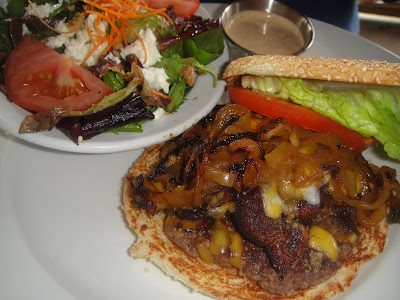 The girls split the burger with caramelized onions and a side salad.
We asked for the patty to be cooked medium rare but it came out well. Thankfully the meat wasn't dry. The ground meat was still loose and not hard packed. The sesame bun was thin so it made the burger seem a little lighter and less starchy. 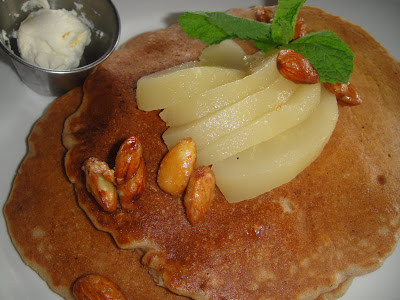 Multigrain pancakes with poached pear slices and almond shavings
The pancakes had a nice spice to it, sort of like gingerbread meets pumpkin pie. It was holiday comfort food. The candied almonds gave a nice crunchy texture to the fluffy pancake. 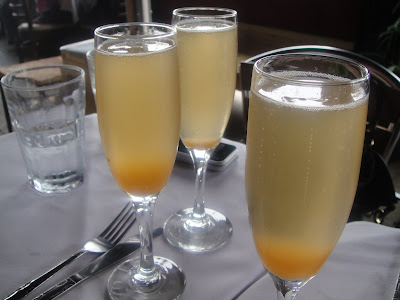 Bellinis were $8. A couple bucks more than our mimosas but still a decent price.

I liked it at Bin 73. This would be a place that I would return for drinks in the evening. After three drinks each, we stumbled out of the restaurant, pleased with our new wine spot and glad that we didn't have to compromise lunch plans with nearby Cabo Cantina. The bill came up to about $40 per person. It wasn't the cheapest brunch but sigh.. the booze actually amounted to 70% of our total bill. Otherwise, everything else was reasonably priced. Hey but after a 12 mile bike ride for the first time in 20 years, gosh darn it I deserve my three drinks!

Are you really afraid of biking?! I would add a couple more "?!" if I hadn't been terrified of it until I finally took off on my two-wheeler as a 7 year old. I was way behind the other kids in my class. Anyway, nice job on facing your fears, and nice job taking down that righteous looking brunch. I'm not sure what to say about the skydiving except that I wouldn't be caught dead doing that for all the pancakes in the world. But more power to you for going for it! :)

Hahah yeah Diana, I am really freaked out by bicycles which is why I refused to get on one for the past 2 decades. I think especially so if i'm going downhill, which I didn't have to worry about this w/e cuz we were by the beach. baby steps!