Santa Barbara Vintner's Festival: not so much fun when you're DD

I was recovering from a throat infection and unfortunately Z-pack didn't take my infection away. Well, I guess it didn't help that I went surfing within 48 hrs of a rainstorm but I wasn't gonna let runoff come in the way of fun! Anyway, a sick person can be your best kind of companion, barring that they don't cough all over you and aren't still in the contagious stage. We can be your designated driver for the day. So I graciously offered my driving services for our trip up to Santa Barbara for the Vintner's Festival. The festival ran from April 16-19, with the main event on Saturday from 1-4pm.

The festival was held at River Park in Lompoc which as it turned out was pretty darn far! It's a good 30 miles past Downtown Santa Barbara and the last stretch included a drive through windy roads. Because I've had lots of practice passing cars on the way up to Mammoth this season, I expertly did so on the 2 lane windy road. The drive was a gorgeous one, ranging from coastal scenery to mountainous greens.

When we got to the festival grounds, parking was a bit painful and disorganized. You would think they'd have this down by now. But once inside the parking lot, things ran pretty smoothly. Admission isn't cheap especially for a DD at $75. There were over 130 wineries represented as well as food and entertainment. 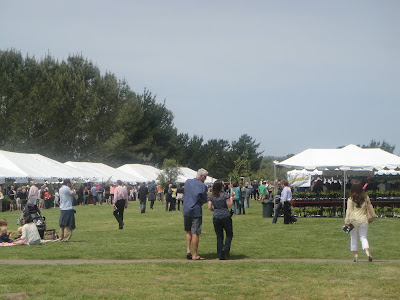 When you first enter, you'll receive a wine glass and a booklet with vendor information and maps. This was lacking at last weekends LA Beerfest where we didn't have a map or know which brands were represented at the festival. 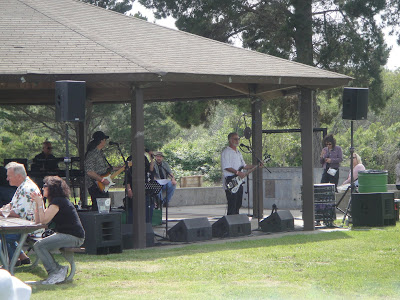 Because I was barely drinking, I spent most of my time sampling food from local restaurants and companies. Don't worry, I didn't eat everything that I photographed. I surprisingly exhibited a bit of self control. 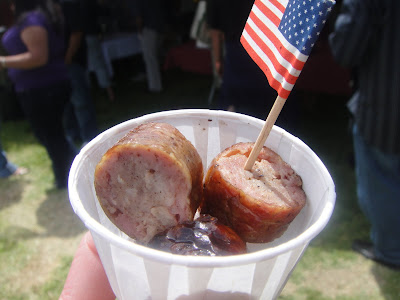 A variety of sausages from Kiwani's club. Pretty delicious and juicy. 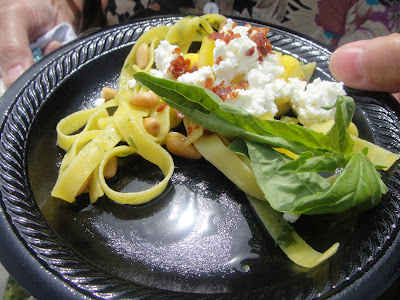 Pasta with prosciutto, pine nuts and goat cheese from The Willows. 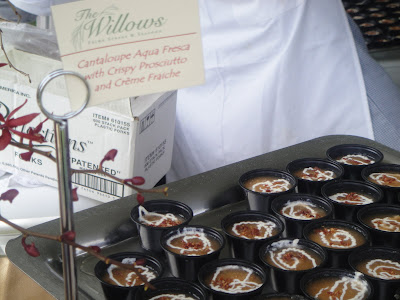 Cantaloupe aqua fresca with crispy prosciutto and creme fraiche from The Willows. I liked the sweet refreshing fluid with the salty crunchy prosciutto. Definitely something unique. 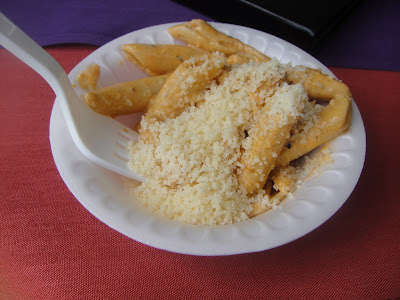 Penne with andouille and chicken from Chef Rick's. Salt overload. I could only take a bite and had to throw the rest away. 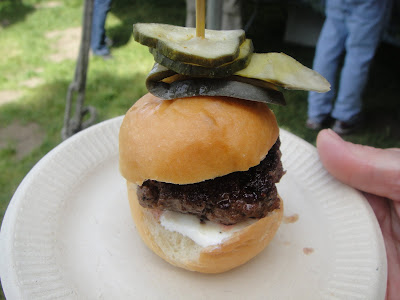 Beef sliders from Root 246. There was a long line for this when they were firing up the grill because the aroma was undeniable. The line moved pretty fast as the guys were pretty efficient in doling out the burgers. A pickled cucumber garnished the top of the slider. 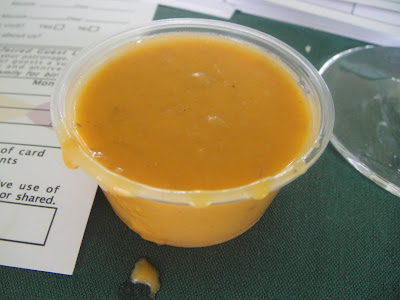 Lobster bisque from Enterprise Fish Company. I enjoyed this a lot. There was a generous amount of lobster in the bisque and it was well seasoned and hearty. 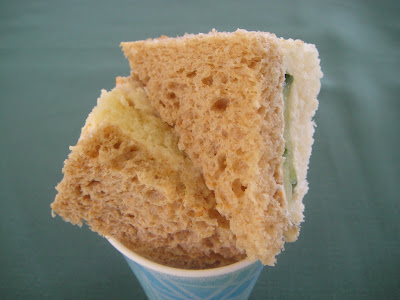 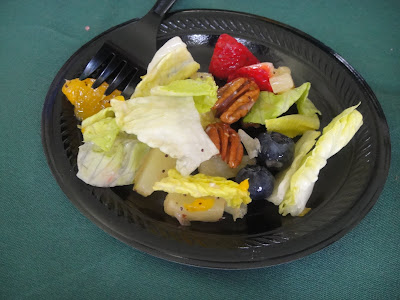 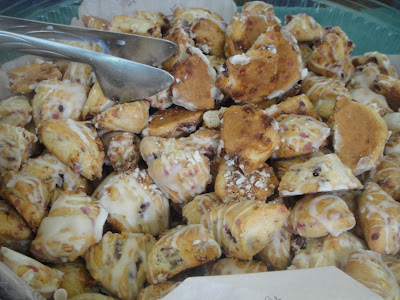 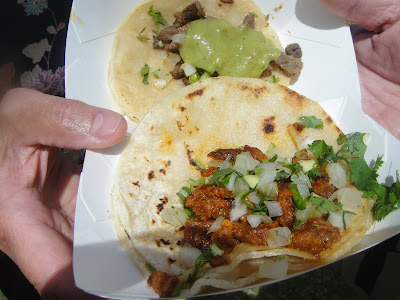 Pork and beef taco from Starting Gate. Delicious. The shell was warmed, lightly oiled with a little crisp to it. The meat was well marinated and served with onions and cilantro. 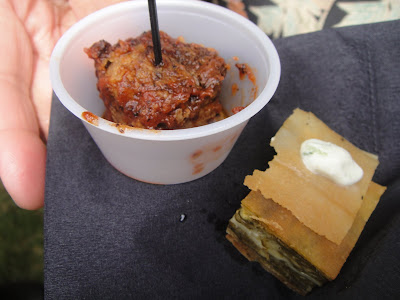 Greek meatball and spanakopita from Petros. Spanakopita is basically a spinach and cheese mixture layered in between phyllo dough. 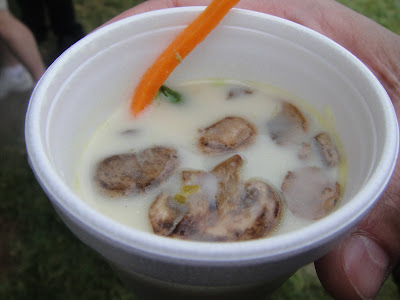 Thai coconut soup with serene vegetables (beans, peppers, mushrooms) from Pearl Catering. I liked the coconut broth which was flavorful but the vegetables, specifically the beans, were hard and undercooked. 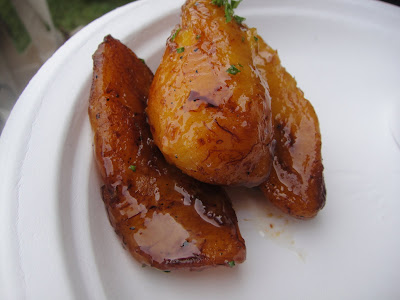 The food lines were short and surprisingly efficient. I do appreciate the variety of free food, however most of them weren't that great although they did serve the purpose of simply lining your stomach. My favorites were the sausages, lobster bisque, tacos and tea sandwiches. I liked that the wine booths were arranged in alphabetical order so they were easy to find. The wine overall were OK, there were some good brands but lots of other mediocre ones. The $75 fee can be pricey if you are not drinking or eating a lot. The drive back was fine, I love driving on the coast although I get easily distracted by the waves. Unfortunately we hit major traffic (accident on freeway that delayed our arrival by another 45 min!) so that put a damper on the trip. Overall a fun day trip but I doubt I'd be back unless we plan on staying the night, making it more of a weekend trip, or if I wasn't DD..

I can't believe you went to a wine festival and had to be the DD! You are a strong woman. Glad you at least had some (or A LOT) of food to nibble on to keep your mouth occupied!

hahah diana.. and in SB no less! 3 hr drive back, brutal. Definitely need a couple drinks when I got home..

Glad to see you mentioned the bisque... ;P

Brian - I had 1.5 helpings of the bisque, I most def HAD to mention it! It was delicious.