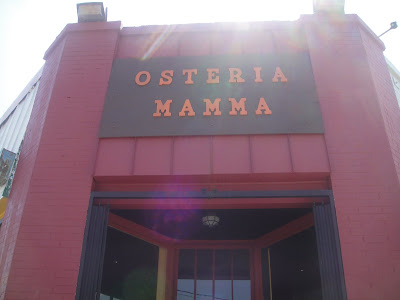 You hear about those Hollywood power lunches. Execs hang out at the Ivy, sip their gimlets, talk shop over a salad. I on the other hand usually spend lunch time in my office or at the gym. But just once, goshdarnit, I too can have my Hollywood power lunch. At Osteria Mamma. I wasn't going to close any deals over lunch. I was going to have a quick lunch and test out the menu for my food blog.

Osteria La Buca (another restaurant) originated on Melrose Ave and was a neighborhood favorite as chef Mamma cooked up her fresh pastas. After some falling out, Mamma and her son left the restaurant. I recently went back to Osteria La Buca and wasn't all too impressed with their pasta dish. When I heard that Mamma and son decided to set up shop just a couple blocks away from La Buca, I was excited to check it out. Their restaurant is cleverly named Osteria Mamma.

Osteria Mamma does not have a liquor license yet and was initially BYOB for the time being but when I got there, I saw a sign outside that said outside alcohol was prohibited. Apparently "someone" complained to the food & beverage authorities about it. Wonder if that complaint came from an ex-partner a couple blocks down the street. I don't want to sound like a lush but that sucks! You gotta have a glass of wine with pasta, no? Well, I do! 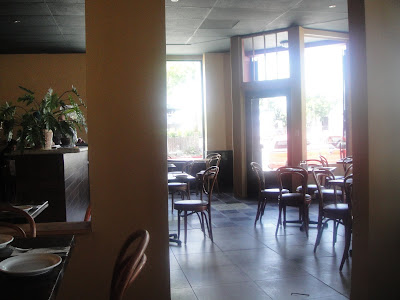 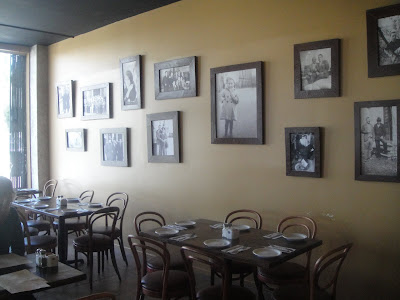 Decor is simple with old black and white photos hanging on the wall. 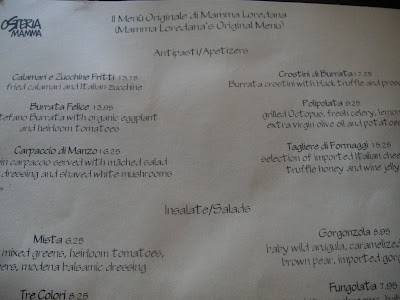 The menu includes salad, pastas, paninis and entrees. The pastas are homemade and some favorites include the gnocchi and bolognese. 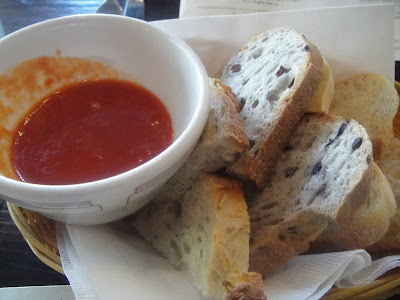 Bread with tomato sauce. They serve this at La Buca as well. 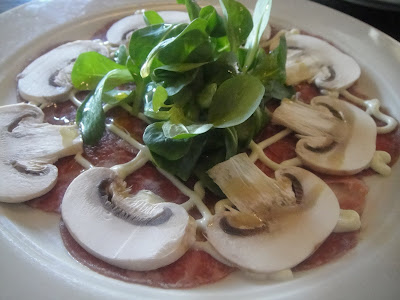 Carpaccio di Manzo $16.25
Tenderloin carpaccio served with mâched salad in truffle dressing and shaved white mushrooms
The carpaccio was tender, thin, lean and not fatty. It was a good cut of meat but it needed a bit of seasoning. Thankfully there was a salt shaker on the table and a pinch really did the trick. The drizzle of truffle cream dressing was aromatic and rich. A great combination with the carpaccio. I wished they had used wild exotic mushrooms instead of the ones that looked like they came from a package from Ralphs. 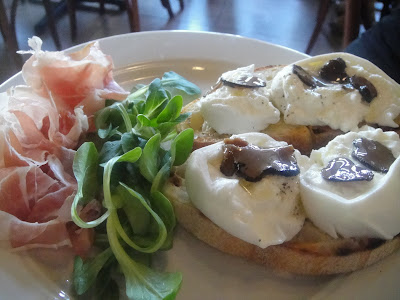 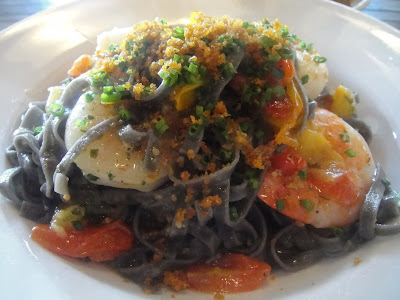 Trenette Nere alla Bottarga $17.95
Black squid ink trenette, organic cherry tomatoes, shrimp and bottarga
I love squid ink pasta. There's something about the color and the flavor from the infusion of squid ink. The pasta was fresh and the shrimp was plump and cooked perfectly. Bottaga is cured fish roe and it added some texture to the pasta. Unfortunately the sauce had an odd sour tangy taste. I liked the pasta but I didn't think the sauce was as good as Valentino's. Perhaps it was the rich lobster sauce at Valentino that won me over.

I enjoyed the food at Osteria Mamma. It was great to indulge over lunch for a change instead of making my homemade turkey sandwich. It was good ole Italian comfort food. The service was great as well from the friendly hellos to the authentic Italian accent of our waiter. Apparently the BlackboardEats 30% promotion that we were planning to use was only for Fridays and Saturdays however they were accommodating and gave us the full discount anyway. It wasn't the cheapest lunch at $25 per person sans alcohol but it was a good excuse to get out of the office. I'd like to return to sample the gnocchi or a pizza ex-cheese, but only after they get some booze in stock.

Yay you went! Now I need to get my hands on Valentino's squid ink pasta to do my own comparison! The sauce on my pasta was actually a little less saucy when I was at O Mamma - it was more olive oily than tomatoey. Wonder if that is the reason yours tasted more sour?