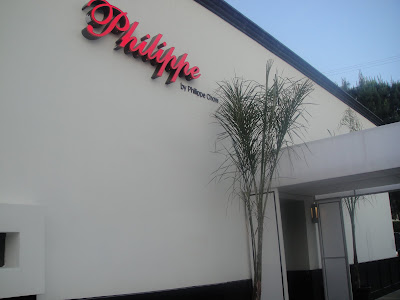 Philippe Chow owns a string of high end Chinese restaurants in Miami and New York, and faced some legal issues last year. According to famed Michael Chow (of Mr. Chow restaurants), Philippe Chow, who used to work in a limited capacity at Mr. Chow, was trying to capitalize on the Mr. Chow brand by serving relatively similar items and deceiving customers into thinking that the restaurants are related. Amidst the lawsuits, Philippe opened in West Hollywood last year at the old Dolce spot on Melrose Avenue. There's ample street parking so at least you can save a couple bucks and use them towards your expensive dinner. I would never subscribe to overpriced Chinese food but when BlackboardEats offered a 30% discount, I decided that I could check the place out under these conditions.

After reading up on reviews on Yelp, the common thread seemed to be that food was overpriced but service had improved substantially as of late. 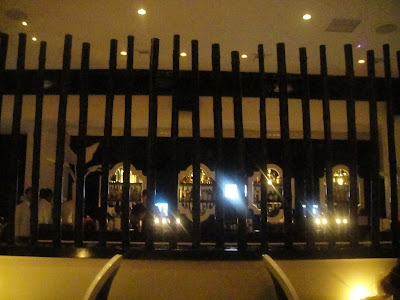 The decor is sleek, modern and nothing like your typical Chinese restaurant. If you didn't know any better, you might think this was a fancy French restaurant based on the restaurant name and decor. 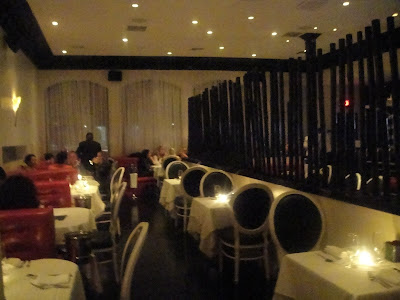 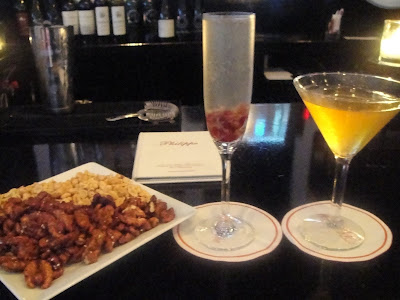 We started off with cocktails at the bar.
Pearfection (Absolut Pear, TY KU liquor, muddled Asian pear, lemon juice, simple syrup) and Golden Grape (Ciroc vodka, muddled grapes, Elderflower cordial, finished with champagne and a frozen grape garnish). Both drinks were delicious especially the Golden Grape but pricey at $19. There was also a plate of candied walnuts and peanuts at the bar. They didn't change out the plate after I grabbed some with my grubby hands. Not very hygienic for an upscale restaurant. 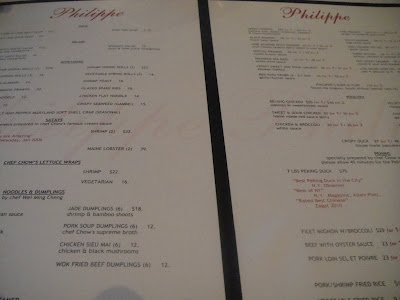 The menu included items that you could pretty much get from Chinese restaurant Hop Li. Although the BlackboardEats promotion listed minimum of 2 appetizers, they weren't strict about it. They just wanted to ensure that diners didn't come in for just one appetizer and water. Our waitress made some recommendations and I liked that she didn't try to trick us into over ordering. 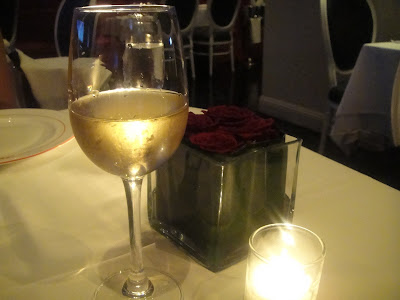 We ordered a bottle of pinot grigio. After a $19 cocktail, I was afraid to look at the wine list but they have reasonably priced bottles. Ours was $55 and it was pretty mid range. 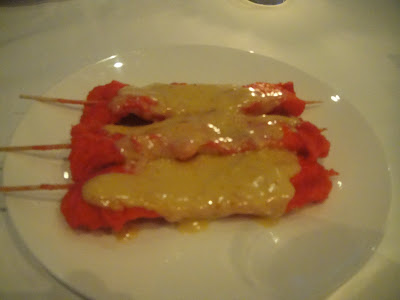 Chicken satay (3 for $18)
This was one of their special dishes, apparently very similar to the one at Mr. Chow. It looked a funky red but was actually pretty good. The meat was tender, moist and tasted almost like veal. Most satays are served with a very strong peanut sauce but this sauce had a creamy flavor in addition to peanut. 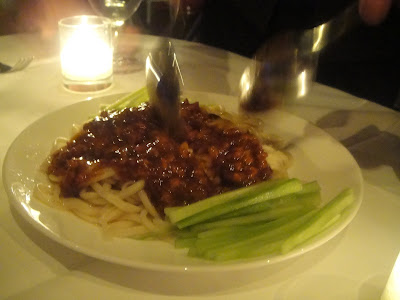 Mr. Cheng's noodles, hand pulled noodles in veal bean sauce.
The noodles were fresh but a bit soggy. The sauce also seemed a bit slimy but I really liked the flavor. The noodles were served with cucumbers that were crisp and crunchy. 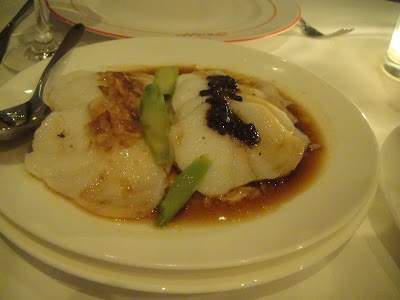 Steamed Chilean sea bass with two sauces, garlic and black bean sauce.
The fish was not as tender as other ones that we've had or even prepared at home. It's a pity because Chilean sea bass is supposed to be buttery if prepared correctly, hence the higher price tag. When eating this fish, you couldn't even tell that it was a superior cut of fish. It could easily have been another white fish. The black bean sauce was better than the garlic sauce as it had more flavor. 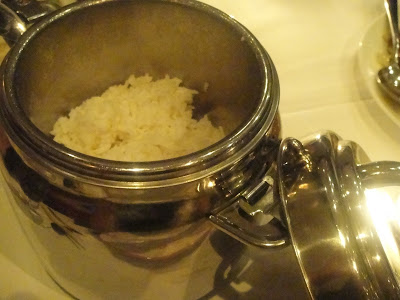 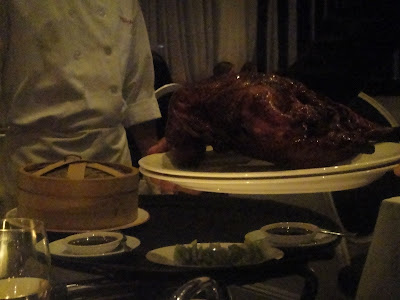 We just HAD to order their specialty 7lb Peking duck. Yes, it's indulgent and at $75, extravagant (we did have some leftovers, although not a lot). I know you can get duck at the Chinese restaurant for $20 but we were at Philippe, we had a 30% discount and the duck aroma that filled the room was all too tempting. 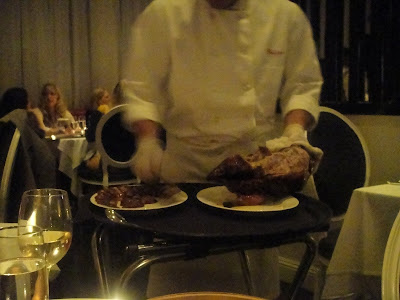 Chef came out and expertly carved the Peking duck, thinly slicing the meat from bone. We asked for the meat and bones to take home for making stock. 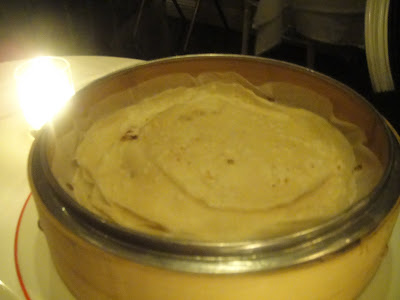 The duck was served with thin house made wrappers which I prefer over starchy buns that some restaurants use. Apparently pancakes are the more authentic form of wrapper. They use the more doughy buns further south in China. 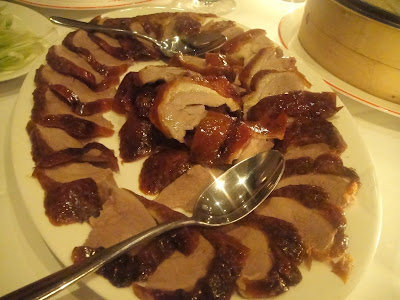 It's interesting that they sliced the duck and skin together. At some Chinese restaurants, they slice off the skin 1st, then the meat and bones separately. The duck skin was crispy and there was not much oil in between skin and meat, however the meat itself was under seasoned. It tasted bland if you ate it alone. I couldn't help but compare it to the Peking duck I recently had for Chinese New Year at Hop Woo. The meat was flavorful on its own and one duck yielded so much food (skin, meat and bones). 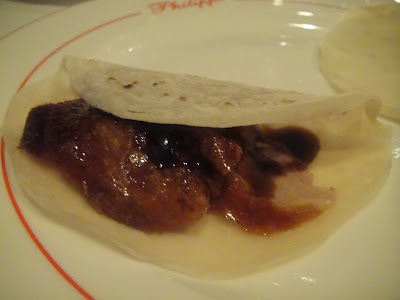 A package with duck skin and hoisin sauce. Even if you are on a low carb diet, I would recommend eating the skin with the pancake because the latter absorbed some of the fat from the skin and just held everything in place.

Our waitress brought by the dessert tray. A bit incongruent here as the desserts were not Asian. Desserts included molten chocolate cake and creme brulee. Wish they offered some Asian inspired desserts, perhaps something with black sesame or red bean. 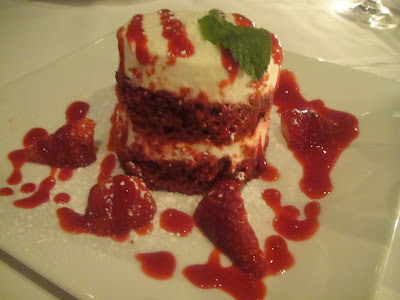 Red velvet cake was more like a neapolitan with layers of cake and cream cheese, garnished with berry sauce and strawberries.
It was delicious, wasn't overly sweet and was something different that wasn't a chocolate dessert. 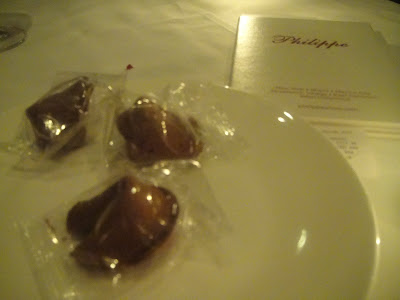 We got fortune cookies with the bill which came up to about $270 pre-discount and excluding the cocktails at the bar. With the discount, we paid about $70 per person. 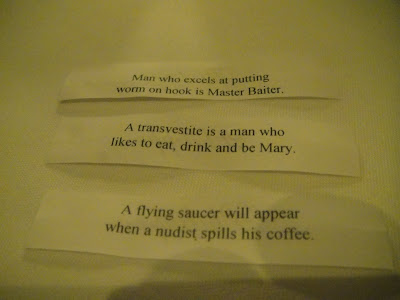 The fortunes are playful and leaves diners laughing when they exit. My favorite is the master baiter. *hee hee*, can't stop giggling like a schoolgirl. Wonder if they serve PG-13 fortunes if there are kids present at the table.

I was impressed with the service. It wasn't stuffy at all. In fact, when we mentioned that we were utilizing the BlackboardEats discount, the host seemed excited about it and didn't look down on us or compromise their service. Service was attentive and friendly. I liked the ambiance- it was fancy, trendy yet inviting, and they played awesome tunes including Zeppelin and Coldplay. But of course apart from service and ambiance, there isn't anything else going for Philippe especially if you are Asian or frequent Chinese restaurants. Philippe's is pricey. Very pricey. But then again, you should already know that going in. So don't act surprised. You made the decision to dine there. You made the decision to pay exorbitant prices. The part that was disappointing was that the menu was exactly like what you could find in a regular Chinese restaurant. We were hoping that they would put a spin on some classic Chinese dishes as we'd be willing to pay for that. Unfortunately, the menu items were traditional although less tasty than what you could find at an authentic joint. And at $75 for the duck, I was hoping for it to taste different than what I could get at Hop Woo. Well, I guess it was different. It was bland. In any case, glad we got the 30% discount because my financial advisor would not approve otherwise. Checking this off my list but probably won't be returning unless asomeone else picks up the tab.