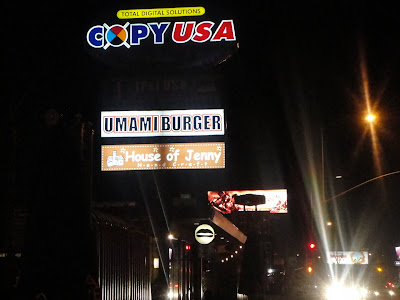 We were going to The Big Pink concert at the El Rey and decided to grub at Umami Burger on La Brea before hand. Yes it took me a year to jump on the Umami bandwagon but I was kindda waiting for them to open their Santa Monica location. Umami is a burger joint that has spread around town with brick and mortar locations as well as their own mobile truck. It's named after the 5th taste (the 1st 4 being sweet, sour, bitter, salty). It's that elusive taste that is synonymous with MSG or meaty flavor. I'm not all too familiar with it so I was eager to try.

I was surprised to find that it was an actual restaurant with tables and waitstaff. Somehow I thought it would be more of a takeout or order at the counter joint. They have valet at $2.50, which is probably the best deal in town. They won't seat you until your whole party is present and the place was filling up fast for a Tuesday night. The food menu is simple, they have about eight types of burgers priced around $10, sides and home made dipping sauces.

We put in our order, and a cold beer please, only to find out that they did not serve alcohol!! Sorry, not at this location. Crap! I can't have a burger without a beer. I knew that The Little Bar across the street allowed you to bring in food from elsewhere since they did not serve food at the bar so we decided to take our food order to go and walked over. SCORE! 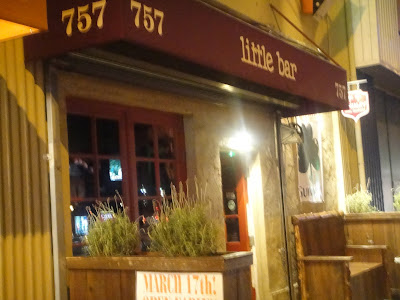 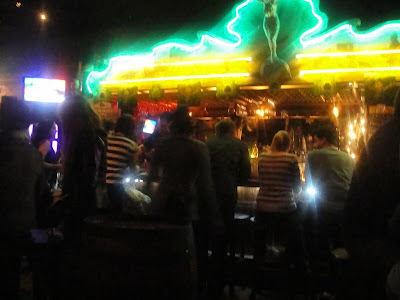 The Little Bar is a great casual, divey place with decent beers on tap, and darts and a pool table in the corner. 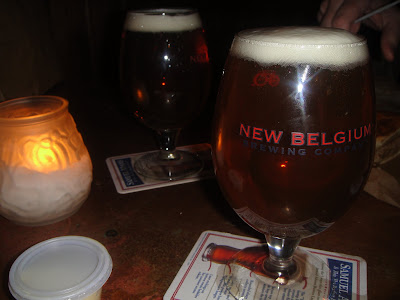 We started with New Belgium Mighty Arrow. It's a pale ale and was relatively crisp and mild. Absolutely hit the spot. Take that, Umami!

Now on to the food, which smelt amazing BTW. 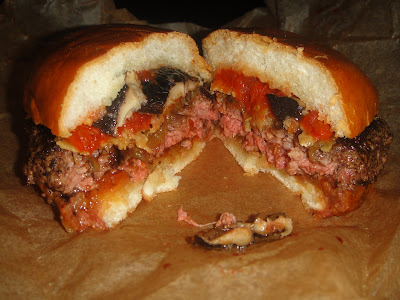 The signature Umami Burger with beef patty cooked medium rare, roasted tomatoes, mushrooms, and Parmesan crisp. I loved that the cheese was more of a crunchy crisp and not melted, especially since I am once again anti-cheese. The bun was soft and glazey, and the patty was thick and juicy. I liked the burger but I thought the sweet roasted tomatoes overpowered the whole burger. You couldn't taste anything else including the mushrooms which are supposed to be a "natural" umami ingredient. I didn't even realize that the Parmesan crisp was in the burger, perhaps because it had melted from the heat of the patty. I would have loved to have the crunchiness add a different texture to the burger. 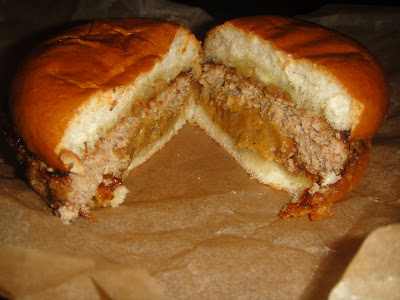 Turkey miso burger with baba ganoush and roasted garlic. This was actually my pick. I liked this over the Umami Burger because it was lighter, leaner and not dripping with grease. The baba ganoush was a nice addition as it added a smokey flavor and some mushiness to the patty, like a layer of spread. The turkey patty was well seasoned and surprisingly not dry. 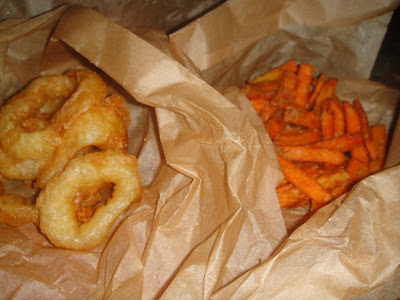 Sweet potato fries and malt liquor tempura battered onion rings. I thought the sides were the winners. The onion rings were amazing - lightly breaded and not too heavy. The sweet potato fries had a sprinkling of what seemed to be cinnamon, which is a fitting marriage since sweet potatoes and cinnamon go well together during Thanksgiving. You get one dipping sauce free with a side so I selected the garlic aioli. It was alright, didn't have a strong garlic flavor which I guess could be both a good and bad thing. 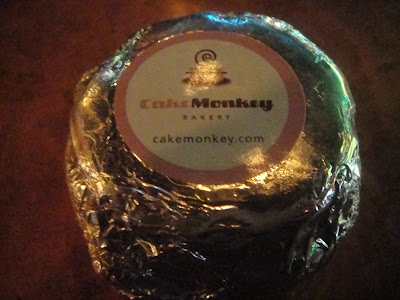 Umami sells packaged desserts from cakemonkey. I'm not familiar with this brand but apparently it's known for their little individual cakes. It's not cheap, this little cake that looked the size of a hockey puck (ok, maybe a bit larger), was $4. 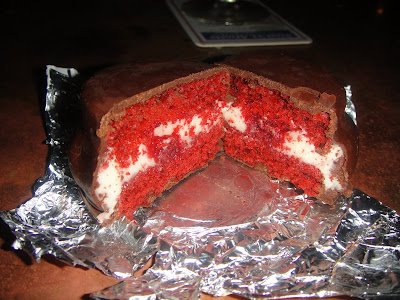 Raspberry red velvet cakewich with raspberry swirled vanilla frosting, coated in bittersweet chocolate. I thought it was tiny but when shared between two, it was rich enough to be sufficient. Plus, I love love love dark chocolate. Perfect end to the meal. 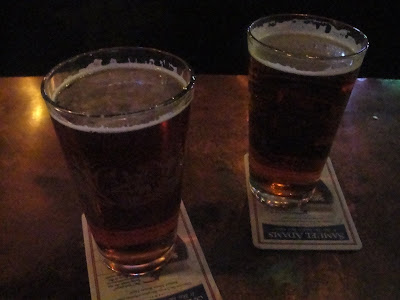 Another round of beers. This time we got the Skyscraper which is a local LA brewing company. 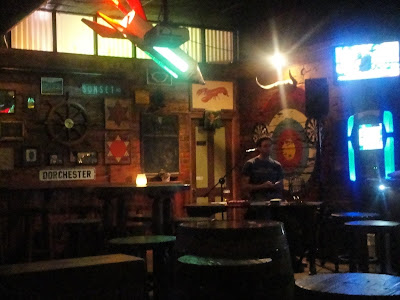 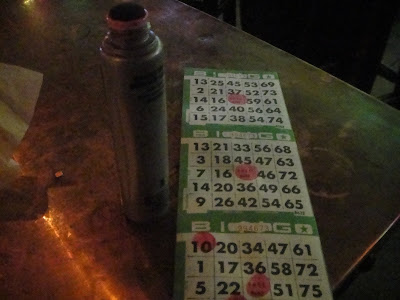 Tuesdays is Drinko Bingo night at the bar, so we had to partake. Basically you get a free drink if you win a round of Bingo.

I'm grateful for The Little Bar for accommodating hungry patrons. A burger really is so much better when you can wash it down with a cold brewsky. Overall, the burgers were tasty and unique, but not mind blowing. Call me daft but I still don't really get the 5th taste. I didn't think a specific taste stood out. The burgers were also on the smaller side, albeit still a sufficient meal when combined with a side. I'd be interested in going back to try some of the other creations, but next time, I'm heading for the outpost with an alcohol license!

After dinner, we made our way over to the El Rey Theatre. There were a few bands playing before The Big Pink, one of which was loud psychedelic rock band, A Place to Bury Strangers. 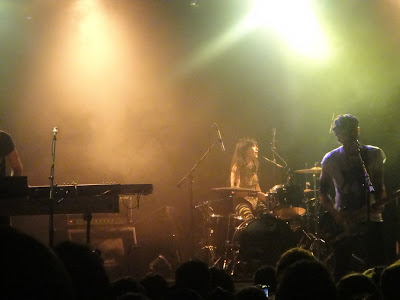 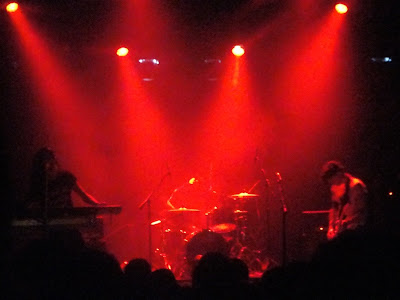 The Big Pink came on last. They are an English electro synth rock band with an 80s feel to it. They are pretty awesome, check out their amazing debut album A Brief History of Love. Unfortunately the feedback was horrendous at The El Rey (I recall the same issue when I was last there catching Autolux). By the end of the night, I was beat. My ears were ringing and I was sleepy (The Big Pink didn't go on until 11.15pm, although right on schedule). Although it was a fun night of beers, burgers, bingo and rock music, I definitely can't hang like that on a school night..

I've heard a lot of people note that Umami's burgers are greasy. I have to say the turkey version looks much more appealing to me!

I will continue to wail against Umami for as long as they are expanding.

Want to taste umami? Go eat some fish, or drink a bowl of miso soup. Umami is a sham. $4 for that lil cake is ALMOST as bad as Mozza2go's olive oil cake. Crime against humanity!~

Diana - turkey was the better bet. But i bet the monkey cake would be your fav!

SinoSoul- i hear ya. many better burger joints out there with better prices.