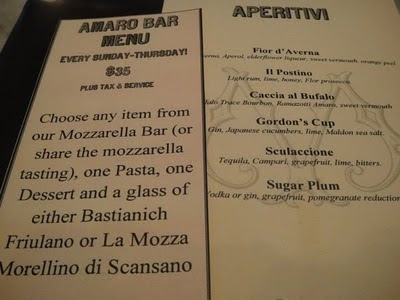 I've a bit of an obsession with Osteria Mozza's Amaro Bar. Last week was our first meeting (I've been previously but not for the Amaro Bar) and after we parted, I was already planning my next meetup. I was excited, but nervous. Did I only enjoy my 1st time because I was buzzed off cocktails and wine (yes.. alcohol impairs judgement). What if my first time was just a fluke? Will my second date match up or be even better? I thought I selected all the good options the 1st time, so am I left with subordinate choices the second time round? My expectations were extremely high for Mozza, and usually, that's not a good thing going in. 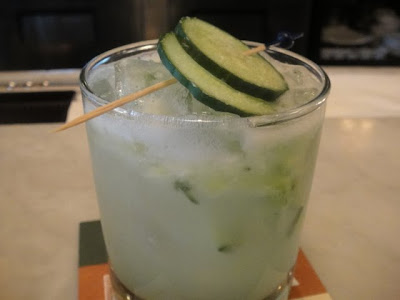 I was tempted to order the same cocktail as the previous week (Il postino with light rum, lime, honey, Flor Prosecco) but I took a chance and tried the Gordon's Cup (Gin, Japanese cucumber, lime, sea salt). After one sip of the refreshing cocktail, I knew my second date was starting off on a good foot.

At Amaro Bar, you get a choice of mozzarella, pasta, dessert and a glass of wine for $35. Menus can be found on my previous post here. You have to snag seats at the bar (no reservations) but even at 7pm, there were still a couple open spots. 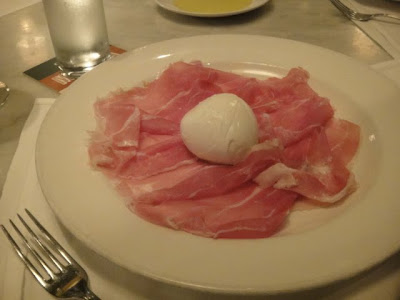 Bufala Mozzarella with prosciutto di San Daniele
This was a simple dish with involved little kitchen prep, but it worked magically. The prosciutto melt in your mouth and was salty but paired well with the mild mozzarella. The portion was large and the quality of the ingredients were top notch. Sometimes, simplicity is best. 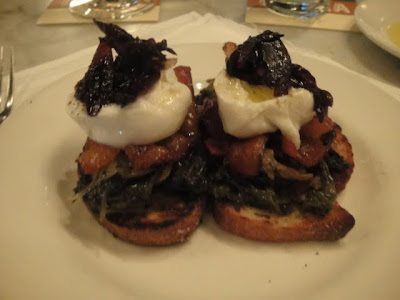 Burrata with bacon, marinated escarole & caramelized shallots
This smelt amazing when it was dropped off. I really enjoyed the creamy burrata, and the well seasoned escarole and shallots which made this a very comforting dish. 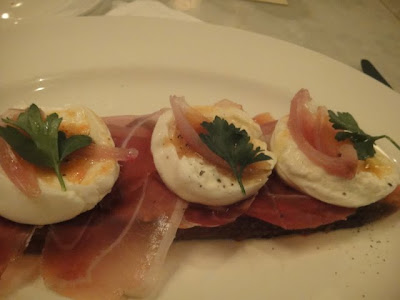 Burrata with speck, pickled onions and pan pomodoro
We ordered this the last time and it was still a favorite of ours. There were many components in this dish with both sweet and sour flavors that worked well together. 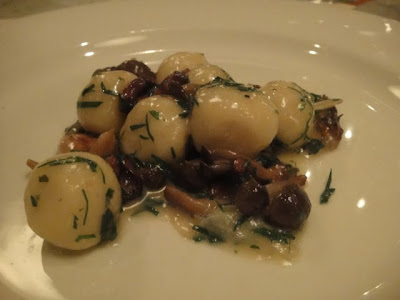 Ricotta Gnudi with funghi misti
This was a great selection for vegetarians because the mushrooms were earthy and gave the dish some substance. Because the gnudi is filled with soft cheese instead of potato, it was soft and pillowy. 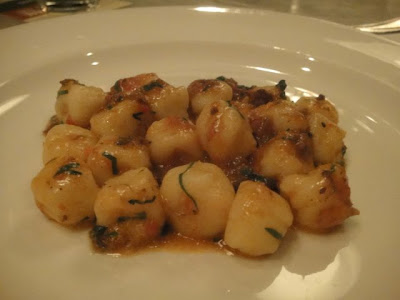 Gnocchi with duck ragu
The gnocchi was tender and not starchy. This wasn't sauce heavy so the dish was filling but didn't seem too heavy. 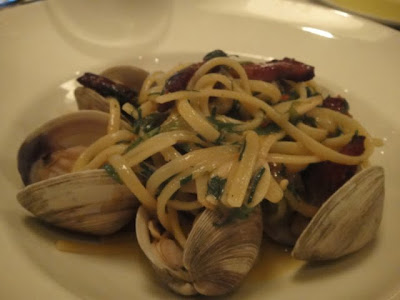 Linguine with clams, pancetta & spicy Fresno chiles
This was my pick and I thought it was the best of the pasta dishes. After last weeks disappointment with the cold Squid Ink Chitarra Freddi with Dungeness crab, sea urchin & jalapeno, I was in search of a flavorful, warm, homey dish. And this it was. The flavors built upon one another, from the brininess of the clams, to the salty pancetta (that reminded me of Chinese char siew), the spiciness from pepper flakes and al dente pasta that absorbed all these flavors. 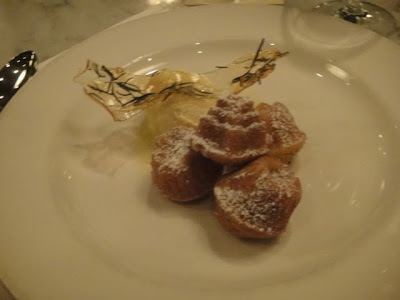 Rosemary Olive Oil Cakes with olive oil gelato & rosemary brittle
This is the Osteria's most popular dish. The olive oil cakes were dense and almost similar to a financier or friand (one of my favorite baked goods). I'm not in love with olive oil so I was nervous that the flavor would be infused entirely into the cake and gelato, but thankfully it was rather mild. The brittle was a ncie touch which added some texture and presentation to the dish. 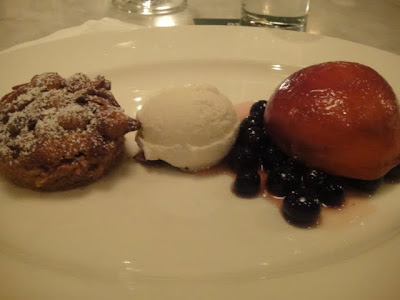 Honey Baked Peach with hazelnut cake, poached blueberries & bourbon gelato
I really enjoyed the crunchy hazelnut cake with the sweet baked peach. The bourbon in the ice cream was not apparent. 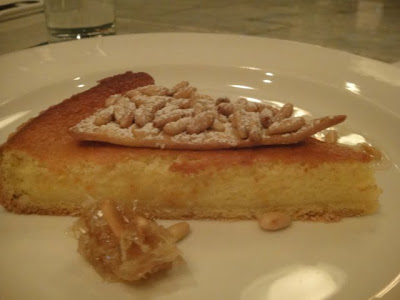 Torta della Nonna honeycomb & pine nuts
The torta was similar to a cheesecake and was made with goat, cream and marscapone cheese. It sounds heavy but in fact turned out to be ones of the lightest of the desserts. The goat cheese wasn't overly prominent but you could taste its presence in the cake.

Similar to my last visit, service was good. Our bartender Jennifer has been at Mozza since its opening and was knowledgeable about the dishes. She also let us know the status of our entrees without our prompting. I thought I had ordered all the obvious good dishes last week, but I was very pleased with my second time picks. The prosciutto was unadulterated with clean flavors (I'd order it again), the pasta dishes left you wanting more even though you were getting full (linguine with clams was jazzed up from what you would find at Italian restaurants), and the desserts always leave you completely satiated. Could it be possible that my second time was much better than the 1st. I was pleased, even after coming in with high expectations. I kind of want to make this my weekly standing Wednesday event. I want to shut down other options that are presented to me. I kind of really want to be exclusive with Mozza.

Nice!!! Jeez, the first thing I'm gonna do when I come back to LA is go to the AMARO bar thanks to you! Also, I am very proud of you for giving EVOO a chance and liking it, kinda?! Time for round III???

I looove those olive oil cakes - my favorite Mozza dessert! Glad you are loving the Amaro bar as much as I do! I'll have to try the clam pasta next time!

I've been thinking about the Amaro bar a lot, but haven't been back since October. Now I feel the need to go again. I love the olive oil cakes!

After reading your last post and this one I REALLY want to go there...let me know if you're down to go sometime soon :)

ladies - let me know if you're ever down to go, I work really closeby so its super convenient for me :)