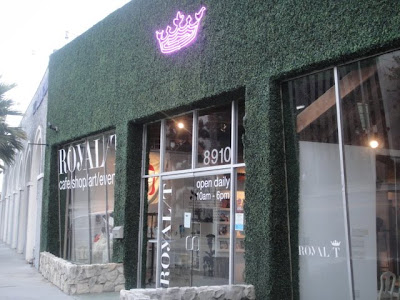 So.. SHHHHHH... I actually have a confession to make. I don't particularly like sushi. It took me about two decades to finally appreciate some cooked fish. Raw fish on the other hand holds no interest to me. But I do like uni (sea urchin), unagi (eel), masago (smelt egg), tako (octopus) and the popular spicy tuna and spicy scallop sushi. I know I know.. I'm weird. So yes, a sushi dinner is not exactly on my list of favorites, but since it was a limited engagement, I sucked it up. 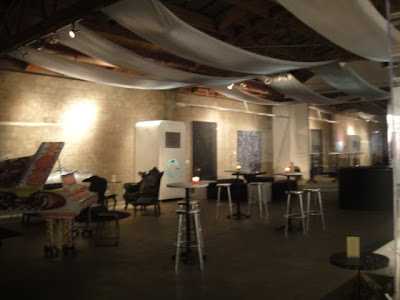 The back room includes a spacious bar area. 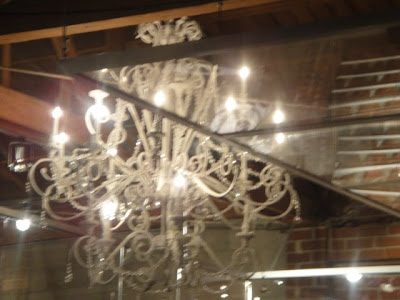 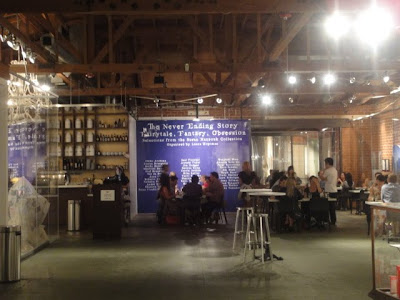 The cafe is very lofty. 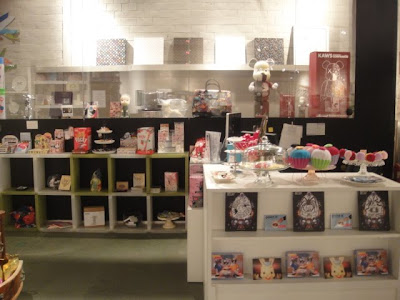 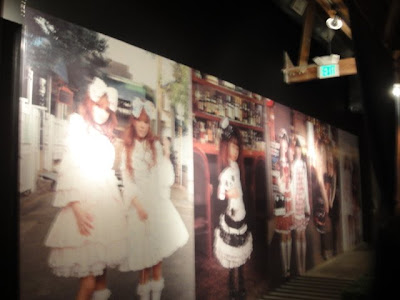 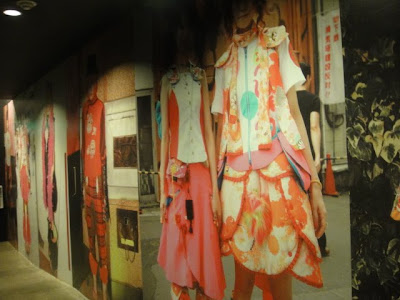 The walls are decorated with Japanese portraits. It's really quite a unique experience. 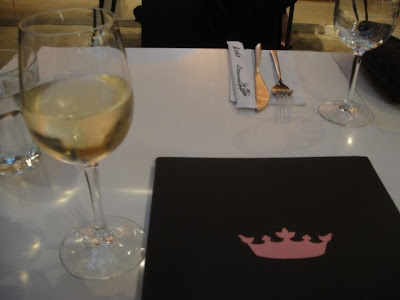 I was the first in my party to arrive so I ordered a bottle of pinot grigio. The hostess apologized profusely that the bottle was not chilled so she brought by a complimentary glass of Chardonnay in the meantime. Awesome! 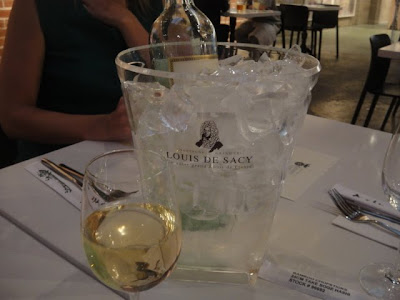 When our bottle was sufficiently chilled, it was served and placed on the table in a nice ice bucket. 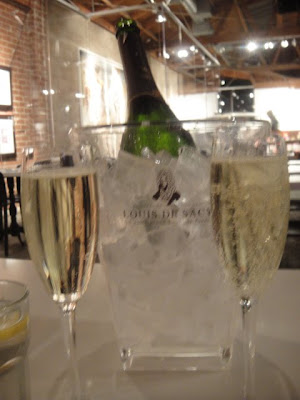 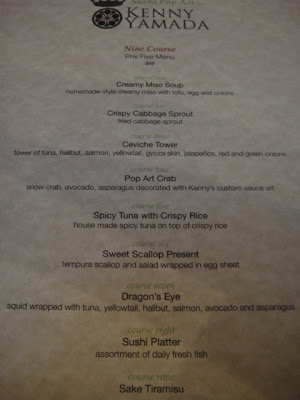 During the opening night of the series, they offered two prix fixe menus (7 course for $45 and 13 course for $90). After reviewing some diner comments, they realized that most did not go for the 13 because it was too many courses, yet some of the popular dishes were only included on the 13 course. As such, they decided to pare down the menu and offer only a 9 course dinner for $58, which included the two favorite dishes from the 13 course. I thought that was quite impressive given that they were intent on presenting a menu that was best for diners despite only being a limited 5 day dining engagement. 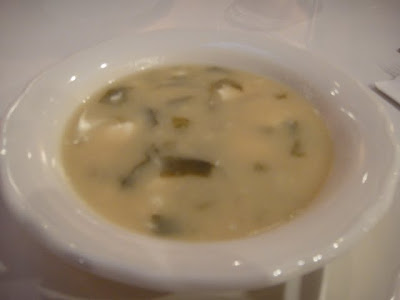 1) Creamy Miso Soup- Homemade-style creamy miso with tofu, egg and onions
Seemingly simple but it's not your regular miso soup. Yes the flavors are similar, but it was thicker and almost like a viscous chowder. 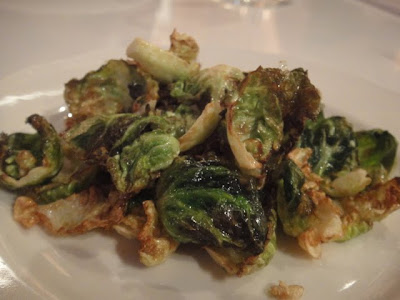 2) Crispy Cabbage Sprout: Fried cabbage sprout
I wasn't too excited about this veggie dish but it turned out to be one of the favorites of the night. The brussel sprout leaves were crisp, buttered and well seasoned. It was a cross between potato chips and homemade baked kale chips. The aroma was amazing. When our waitress walked by with a plate for another table, I had to refrain from hijacking the dish. 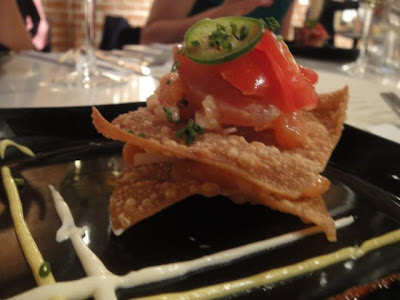 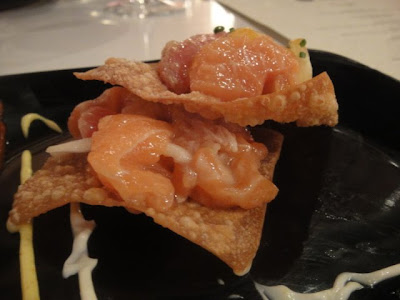 Apparently this was one of the popular dishes of previous diners. The fish was fresh so even a non-sushi-lover like myself enjoyed it. You could either eat it with fork and knife, or tackle the tower by layer. I liked the spicy jalapeno that sat atop the tower, which left a lingering spicy tingle on my tongue. 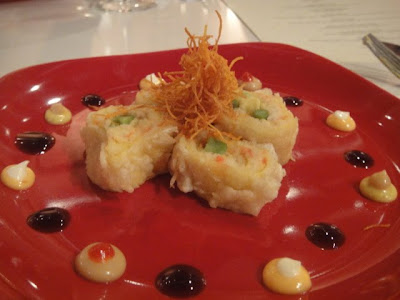 4) Pop Art Crab: Snow crab, avocado, and asparagus creatively decorated with Kenny’s custom sauce art
I loved the little dollops of sauce that you could smear on the plate to create your own art. Unfortunately the sushi itself was quite odd texturally. Rice was replaced by crab but it was pasty and almost doughy. 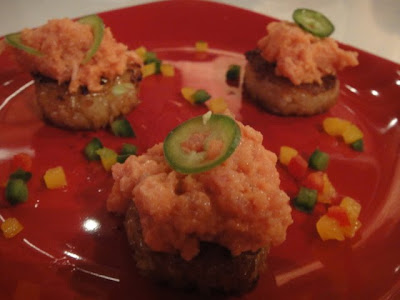 5) Spicy Tuna with Crispy Rice: House made spicy tuna on top of crispy rice
I'm a HUGE fan of spicy tuna on crispy rice which is a popular dish around town (my favorites are the ones at Bar Food and Katsuya). Unfortunately, the rice was far from crispy. It was soggy and in fact, rather greasy, which is the antithesis of Japanese sushi. The crispy rice was extremely salty (which I enjoyed), but I'm sure many will find it over-salted. 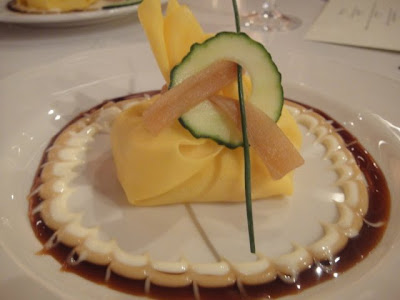 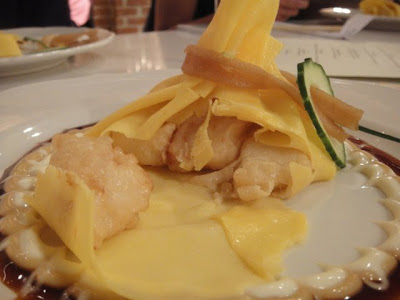 This was one of our favorite dishes of the night. First of all, the presentation was lovely. The present was tied with a dried Japanese zucchini strip. Secondly, the crepe wrapper was delicate and soft. I liked that the wrapper wasn't deep fried like most packages tend to be. Thirdly, the scallops were also cooked perfectly. The mild scallops and crepe worked well with the eel and mayo sauce that decorated the plate. 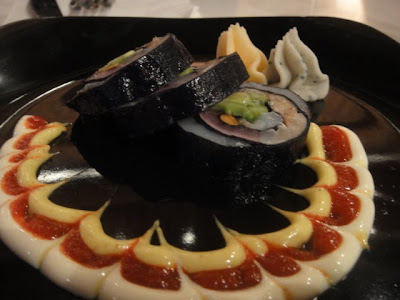 7) Dragon’s Eye - Squid wrapped with tuna, yellowtail, halibut, salmon, avocado and asparagus
This was another riceless sushi created by Yamada. I'm all for the low carb trend. I liked the soft, supple texture of the calamari. The decorative mash potatoes made with tobiko (fish roe) was unique. When you took a bite of mashed potatoes, you could taste the tiny salty tobiko and feel it burst on your tongue. The combination of fresh fish was seasoned with yuzu but the spicy mayo sauce on the plate added some heat to the sushi. 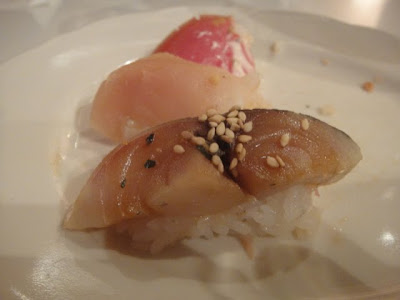 8) Sushi Platter - Assortment of Daily Fresh Fish
Since I'm not a big fish person, I only took a small bite of the sushi which included tuna in spicy miso, mackerel and albacore. Unfortunately, neither of my sushi-loving dining companions enjoyed the sushi. They commented that it was lukewarm (gasp!) and didn't taste the freshest. Big no-no for sushi. My internal barometer for freshness of fish was accurate as I discretely spit out the mackerel into my napkin. I'm just overly sensitive when it comes to raw fish. 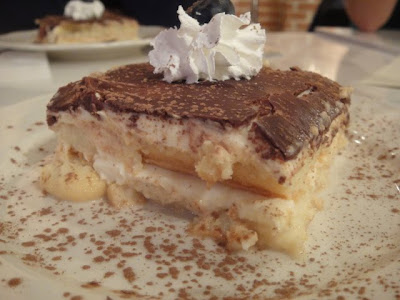 9) Dessert: Sake Tiramisu
This was the perfect end to the meal. Even though I was full at this point, I couldn't help but inhale every bite of the tiramisu. The cake was light and the custard wasn't too heavy. Sake was used in lieu of the usual rum. The tiramisu was topped with a delicious layer of bitter dark chocolate ganache.

Given that I'm not much of a sushi eater, I was surprised to walk away satisfied and pleased. I'm relieved that the menu wasn't entirely raw fish. As expected, my favorite dishes were the cooked ones. I especially enjoyed the miso soup, the crispy brussel sprout leaves and the scallops wrapped in crepes. The raw fish didn't do it for me, and my friends concurred. The service was attentive and friendly. The manager Will came by to chat with us, and gave us good insight on the dishes. I appreciated the free glass of Chardonnay that was given to me while I waited for my bottle of wine to chill. I liked the ambiance of Royal/T Cafe. It's so unique and the waitresses dressed in maids outfits were intriguing, but I would think might attract some weird perverts. Overall, a fun dining experience, but I don't think I'll dare eat a piece of raw fish for a long time to come...

was the sushi warm because of the fish or the rice? some regions of japan serve sushi with warm rice. the spaces looks really fun.

bagnatic- no the actual fish was warm... the rice was normal temp. Love the space, wanted to take a photo of the waitress dressed in maids outfit but they're prob so sick of pple asking!