What do surfers do when the surf is flat? They do dorky things like... 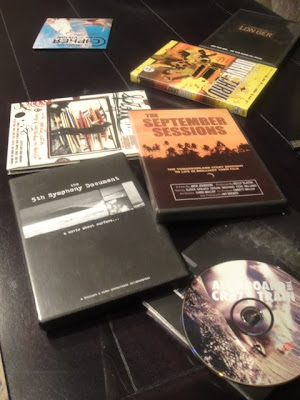 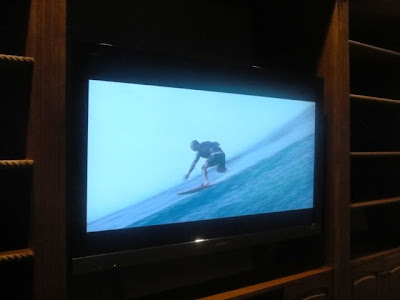 and talk about how we wish we could surf like these guys do. Sigh.. 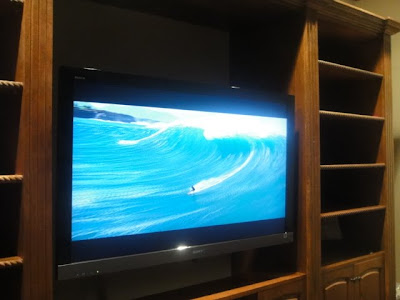 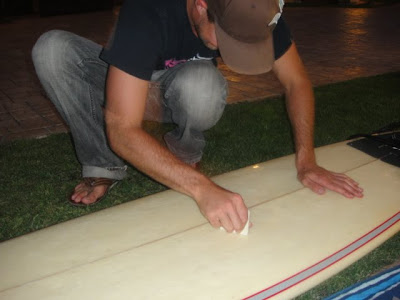 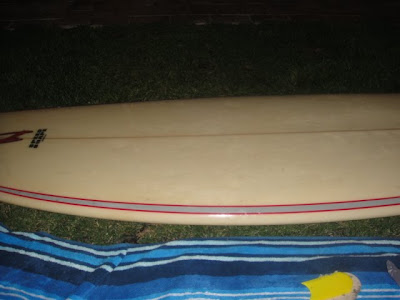 Oh man, after stripping off coats of wax, this board's looks brand new! Ready to take it out once I get the stitches removed. 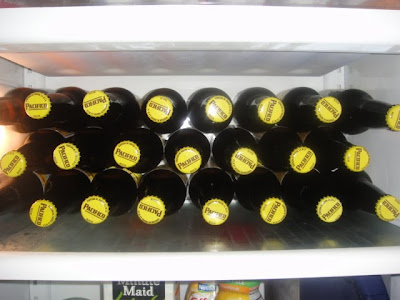 or make a delicious Moscow Mule. 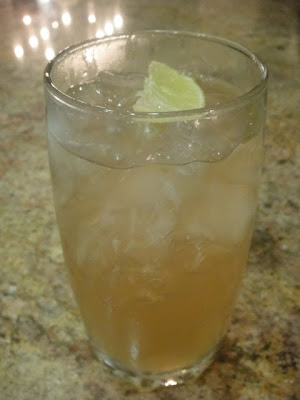 4) And the smart Bettys rope their friends into installing surf racks in their new garage. 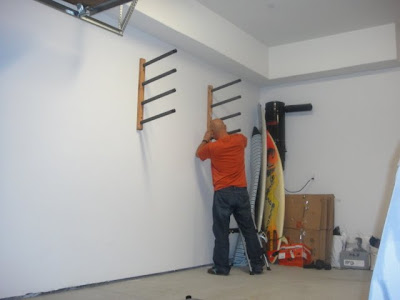 Check out my awesome racks! *snicker* 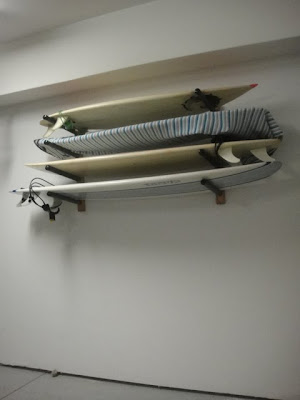 To feed 5 hungry surfers and thank them for their labor, I decided to make some grilled fish tacos for our movie night. There are many recipes online but many of them include the addition of a cilantro lime dressing (two of us hate cilantro). To switch things up a bit, I decided to make Asian inspired fish tacos which I found online.

You can choose any type of firm white fish which you can purchase from the fish department at your local grocery store, or frozen from Trader Joe's. Just be sure to defrost if it's frozen. I went with mahi mahi which held it's shape on the grill. 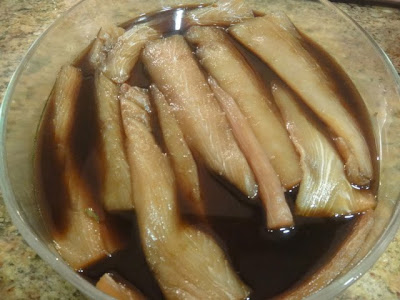 Marinate the fish for at least 30 minutes. Yeah, that's a lot of fish (2 lbs) but there was barely any leftovers. 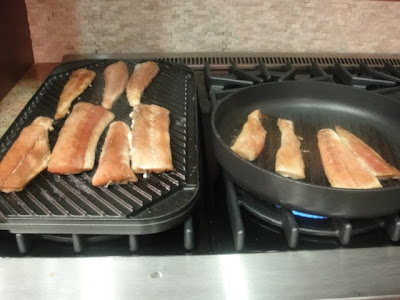 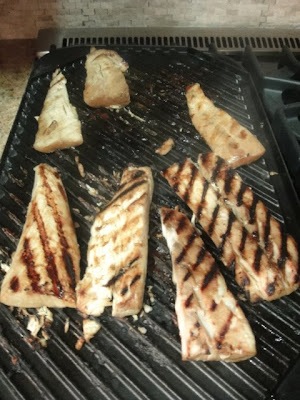 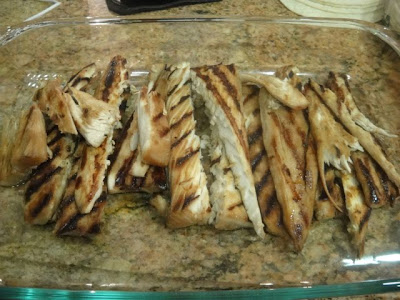 You can grill it out on the BBQ but I opted for a grill pan and skillet. 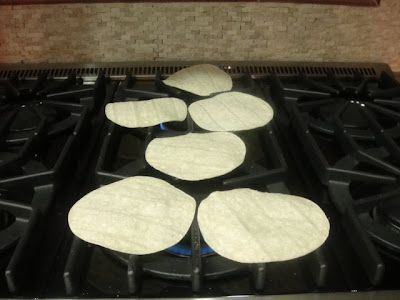 The most important part of any fish taco is the condiments. 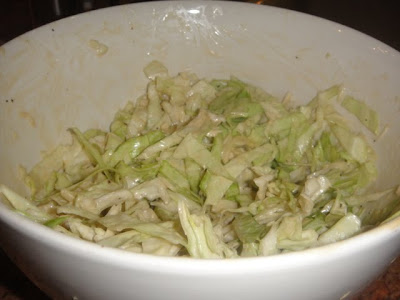 Asian slaw added freshness and crunch to the taco. 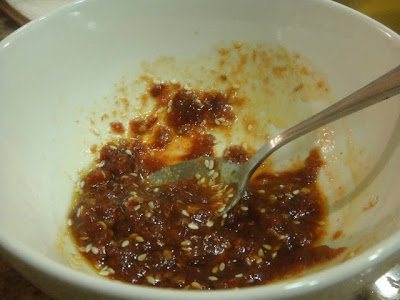 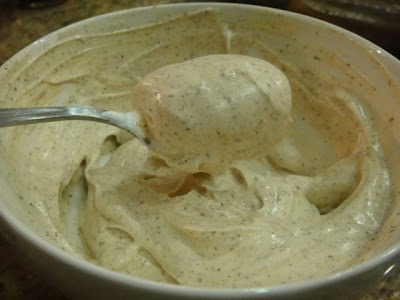 I also made a chili cream sauce which had a nice zing to it. 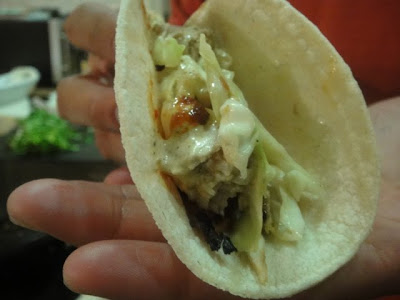 This was such an easy recipe, and something that I'd definitely make again. I liked the Asian flavors which packed a lot of heat. It was light and healthy, especially when substituting with low fat mayo and low sodium soy sauce.

And for dessert, an awesome Opera Cake from Trader Joe's. Sorry dudes, I ain't baking for anyone. 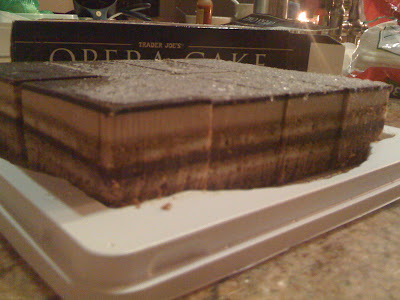 30 minutes before cooking, mix mirin, soy sauce, lime zest and ginger all together. Pour over fish and allow to sit. After 30 minutes, remove fish from marinade.

Heat grill to medium high. Using cooking spray or oil, grease the grill so as to prevent fish from sticking. Cook for 4 minutes on one side and then turn. Cook for an additional 2 minutes until fish is firm and opaque. Remove from grill.

Warm tortilla over low heat. In a warm tortilla, add a nice chunk of fish. Top with the slaw, cilantro sprig and a few sprinkles of sesame chili sauce.

In a small bowl, whisk together mayonnaise, soy sauce, sesame oil, rice vinegar, and pepper. Toss together with cabbage and scallions. Set aside.

Mix all ingredients together. Set aside.

Whisk all ingredients together. Set aside.

I'm downloading it and making it soon!

You make me want to be a surfer. And then I remember that I have no coordination and I'm afraid of swimming in the ocean.

oddlyme - hope you enjoy it! so easy too

Diana - hahaha well.. if you ever wanna try, let me know :) i got extra boards. Or if you just want fish tacos, that's ok too