Bouchon: I think I might be losing faith in the Keller empire... 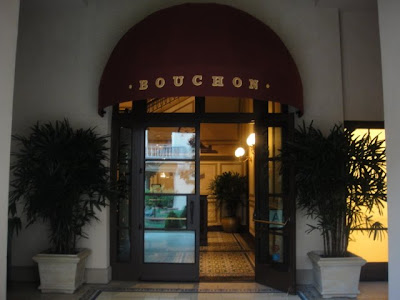 Bouchon Bistro is owned by Thomas Keller, America's culinary god. He's been awarded two Michelin Three Stars for his restaurants, which is a pretty big deal. Bouchon has two other locations (Yountville and Las Vegas), and LA was delirious when he decided to open one in town. Given Keller's elite status, it's only fitting that he situated his Los Angeles outpost in the ritziest part of town- by the grand Montage Hotel in Beverly Hills. They were supposed to open a bakery but that's currently on hold. He may be a culinary god, but I guess he's not immune to recession. Keller also owns The French Laundry, Per Se and Ad Hoc. He seems down to earth and humble (if you've seen him judge on Top Chef) and I really want to like him. I really do. But he has disappointed me with repulsive egg dish at Bouchon, Las Vegas, and a mediocre and bland brunch at Ad Hoc. But I knew that I had to give the Keller empire another shot. After all, my last two experiences were experienced during brunch. Perhaps the food at dinner would be much stronger.

When my attorney suggested that we meet for dinner to discuss my account, we thought.. why not Bouchon? It's been on our list for a while, and the dinner would be expensed. Well, I guess technically I'm probably paying for it through legal fees. Guess there's no such thing as a free lunch. As I made my way to the restaurant, I passed Bar Bouchon, the casual, more relaxed, livelier and less expensive version of the restaurant. Their happy hour runs from 4-7 pm and includes drink and food specials including oysters and sliders. Unfortunately for me, I didn't have time to hang out at Bar Bouchon. But next time for sure. 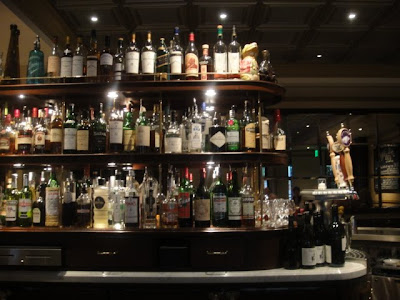 I made my way upstairs to the restaurant and grabbed a seat at the bar while waiting for our table. I peered over to the dining room and noticed that the diners were of all ages. The room was also bustling with a lot of chattering, but you could still hold a conversation and be heard. 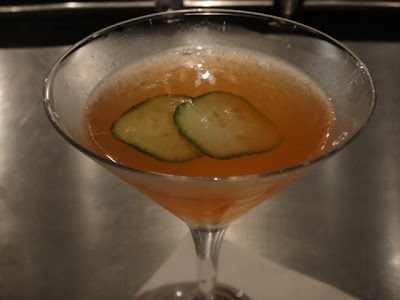 The Gypsy (Gin, Aperol, Canton ginger, cucumber, fresh lemon)
I love ginger, cucumber and lemon so I was excited to dive into this drink. Unfortunately, it wasn't very good. I thought it was not sweet enough and tasted a bit too bitter from the aperol. This wasn't the type of drink that I'd crave for another. 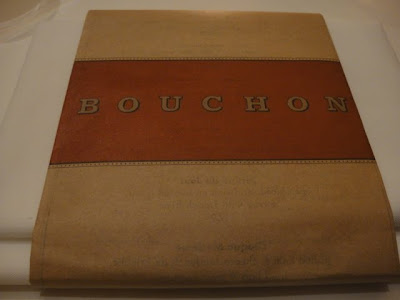 When we were seated, we were presented with the menu which was wrapped over our napkins. Bouchon serves typical bistro fare such as steak frites, boudin blanc and moules frite. They also offer a few specials of the night. 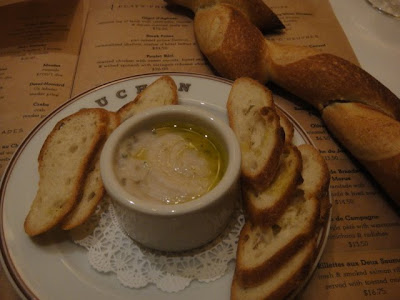 Even though Bouchon Bakery is not up and running in Los Angeles, they still bake their bread daily. We were served epi baguette with butter, and baguette slices with a white bean puree. 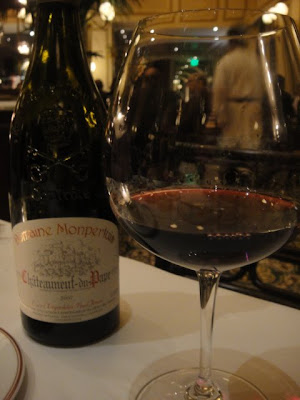 We got a bottle of Domaine Monpertuis Chateauneuf-du-Pape which was smooth and went perfectly with our heavy meat entrees. 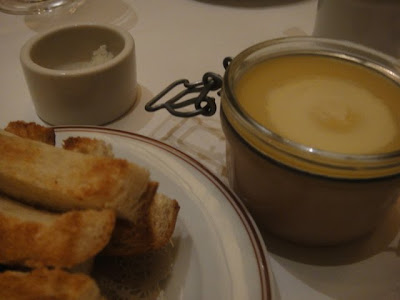 Terrine de Foie Gras de Canard served with toasted baguette (5 oz.)
Absolutely indulgent and pricey at close to $50 for the jar. But it's worth it. It's foie in its unadulterated form. No distraction, no sweet chutney on the side, no pan searing of the foie. It was served simply in a jar alongside sea salt and brioche. This is the type of rustic dish you would expect from a French bistro, albeit probably cheaper. The brioche was slightly awkward to spread the foie on because it was log shaped and there wasn't as much surface area for spreading compared to a piece of toast. Our waiter advised us to save some foie to dip fries in. Even though the foie was rich, we still had a tough time refraining from devouring the whole jar before the fries arrived with our entrees. 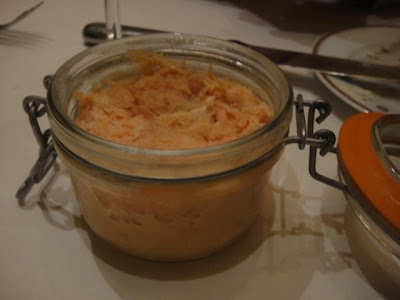 Rillettes aux Deux Saumons (fresh smoked salmon rillette served with toasted croûtons)
This is a more interesting salmon appetizer than a regular smoked salmon dish. It was good but it doesn't beat out the foie terrine. 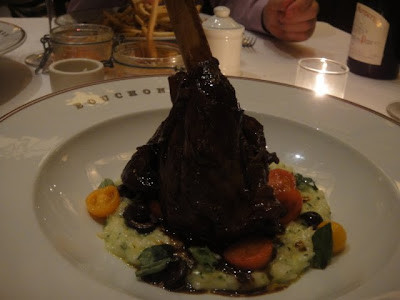 Braised lamb shank with risotto
This was one of the specials of the night. The lamb shank was a bit of a disappointment. When you think of lamb shank, you expect a juicy, fork tender huge piece of meat. The meat was sizable, but it definitely needed to be braised longer. It did not fall off the bone and was rather chewy. In fact, there was quite a bit of effort required to cut the meat into edible portions. I've had much better lamb shanks at Le Petit Restaurant for half the price. I liked the flavors of the risotto which was mixed with basil, olives and tomatoes, however it wasn't creamy like a good risotto should be. It seemed like they didn't stir in enough butter or Parmesan prior to serving. 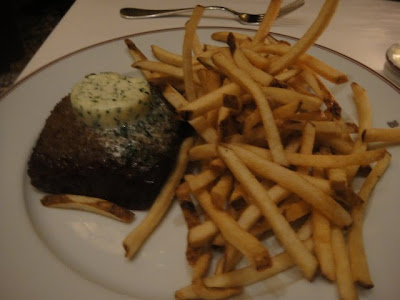 Steak Frites (pan-seared prime flatiron, caramelized shallots, maître d'hôtel butter & French fries)
Once again, the entree was decent but not stellar. The steak itself was fine but nothing that a home cook or chain restaurant couldn't do. I know, that's harsh, but I'm unimpressed. It just wasn't anything special, and you would never have known that you were eating at a Keller restaurant. In fact, it's also pricey at $35 for something that ordinary (compare this to Anisette's version at $28). Probably the best part of the dish was the fries. 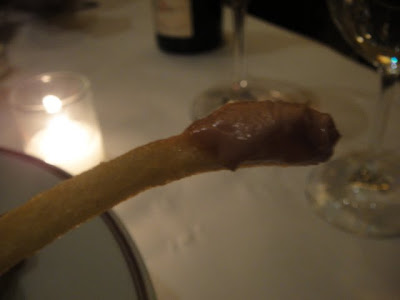 Especially when we heeded our waiters advice and dipped it in foie. 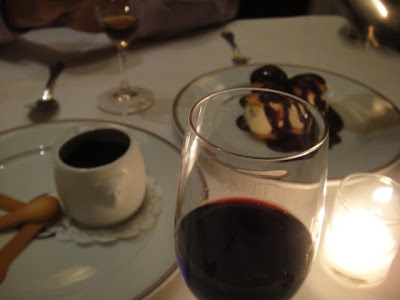 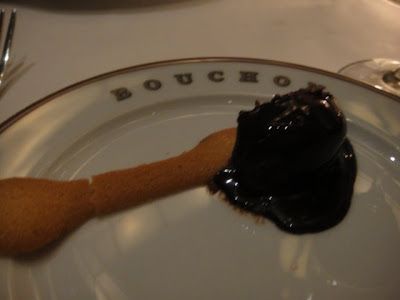 Mousse au chocolat noir.
The dark chocolate was smooth and silky. The brittle cookie broke the minute you tried to dip it in the mousse but it was still tasty. If I wasn't in a fancy joint, I might have dug my finger into the cup of mousse and licked every last bit of chocolate off my finger. Yes, I'm not refined. And yes, I was wearing flip flops. In Bouchon. 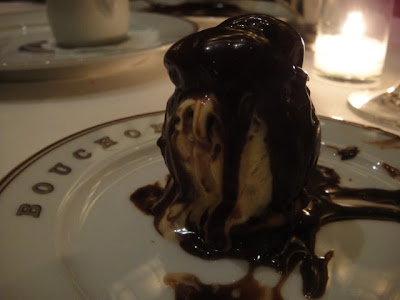 Profiteroles with vanilla ice cream and chocolate sauce
The choux pastry was airy and light. I loved this dessert because it wasn't too sweet. It had the right amount of chocolate sauce drizzle on top of the ice cream.

The foie gras and desserts were definitely the strong points of the night, while the entrees were nothing special. The flavors were there, but there were some problems in the execution of the dishes. The food wasn't bad, but it was definitely not worth the $500 bill for three people. In fact, I would venture to say that I preferred my dinners at less expensive French restaurants such as Bistro LQ and RH at the Andaz . It's such a pity because I expected more from a Thomas Keller establishment. I think we've decided that we're going to stay away from Keller restaurants going forward, unless it's his 3 star winners Per Se and The French Laundry. I don't mind shelling out dough for an impeccable meal but I felt Bouchon Bistro did not deliver, once again. Thankfully this time, it wasn't my dough.

Bar Bouchon FTMFW. Period. The rest is just.. Iunno. Why bother. I walked out of Ad Hoc. But Bouchon bars hold a special place in my heart.

Being a cheapass, if my counsel asked to meet me Bouchon Upstairs, I'd fire his bourgeois ass.

Yikes. I was really excited when Bouchon opened and planned to save up for a meal there, but now I'm thinking I'll stick to some nibbles and wine at the bar.

Really a shame... it's such a beautiful space!

wow, that stinks. i think it's worse when an establishment has such notoriety. so dui again eh? kidding...

Wow, baller, you. As a student, I'd have to stick to one happy hour drink :p but good to know I ain't missing much.

Hmm. Am I the only one here who likes Bouchon?

Diana- You should go anyway, I'd hate to keep you from Keller. Get the foie though :)

Bagnatic - I haven;t given up on Keller completely. My friend (who didn't care for Bouchon) just went to Per Se and loved it. Confidence Restored!

Anna - As a student, you can still get moer than one drink... HH at Bar Bouchon!

Weezer - I did like the foie (but expensive). I dunno.. it wasn't BAD.. but I expected more from the reputation and for the prices