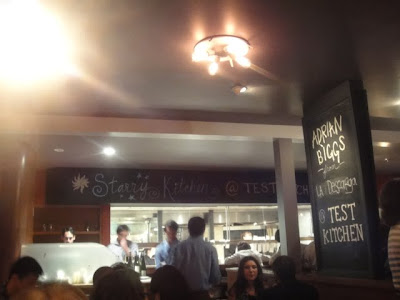 Hot off the heels of pop up restaurants that are making appearances all over Los Angeles (Ludobites, Breadbar's Hatchi), Bill Chait and Brian Saltsburg brings us Test Kitchen. It's a brilliant concept really. The space is at the now shuttered Spark Woodfire Grill on Pico in West LA. The chefs rotate every couple of day, showcasing menus that they are testing for their impending new restaurants. And the guests are the guinea pigs. In fact, very happy guinea pigs because the chefs are renowned and all well respected. The series opened off with Jordan Kahn (testing out Red Medicine), Ricardo Zarate (Mo-Chica), Walter Manzke (Church and State), Michael Voltaggio (Langham, Top Chef), Neal Fraser (Grace), Vartan Abgaryan (A Restaurant), TiGeorges, and most recently, Thi Tran (Starry Kitchen).

Amidst all the James Beard and Michelin Star Award winners, I was actually most excited to sample Tran's menu. Since Tran hails from Vietnam, her menu is Southeast Asian inspired, not your regular Asian inspired. i.e it's not P.F. Changs or Chinois on Main (both good in their own right). Think Thai, Malaysian, Vietnamese, Thai flavors. As a Singaporean with a Malaysian father, I grew up with these flavors, and I know they are hard to find in LA. So I was stoked when I was able to score a reservation for the one night event. Joining me was Diana Takes a Bite, who seemed to know every guest/chef/owner/bartender/sommelier/neighboring diner in the house. The menu is served family style and includes 8 dishes for $45. Now that is the Southeast Asian prices I'm familiar with. 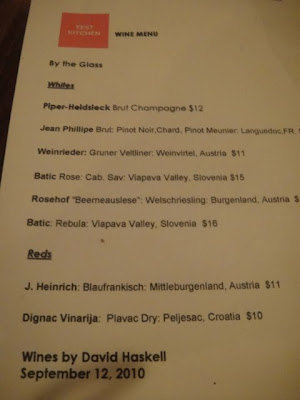 Wine by the glass and wine pairings ($40) were brought to you by David Haskell (Bin 8945, Vertical Wine Bistro). 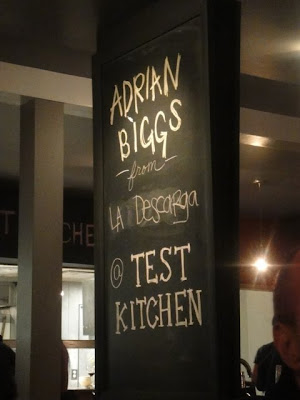 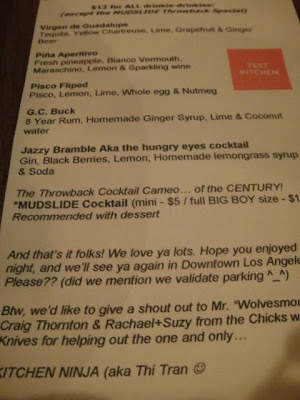 Cocktails were mixed by La Descaraga. 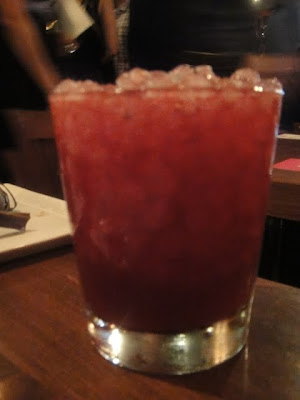 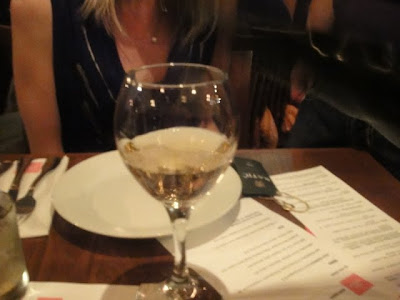 Diana started off with tailored wine pairing. Because 7 drinks on a Sunday night would have been an overkill, David did a series of selected (generous) half pours. I jumped in on the pairing after my cocktail. 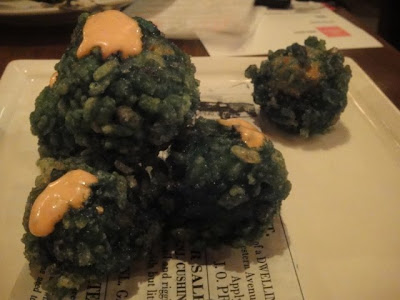 Crispy Tofu Balls- marinated ground tofu, corn, buttermilk, green glutinous rice
Not on the tasting menu, but their popular dish was offered for purchase at the bar for the diners that couldn't procure reservations but wanted to join in on the evening. 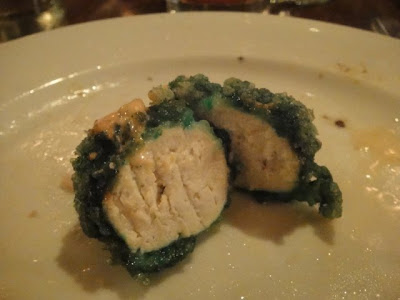 I tried these balls at the LA Street Food Festival a couple months back and was thrilled to get more than one ball this time. In fact, because Diana knew the owner, the kitchen brought by another plate of tofu balls. I like rolling with her, but am still regretting the four balls I had on my own.

The colors were vibrant with the contrast of green and yellow with the pale interior. The tofu reminded me of fish balls. No.. not fish's ball but fish rolled into balls, then steamed. A very popular dish in parts of Asia. I really liked the glutinous rice that was crispy but at the same time chewy. 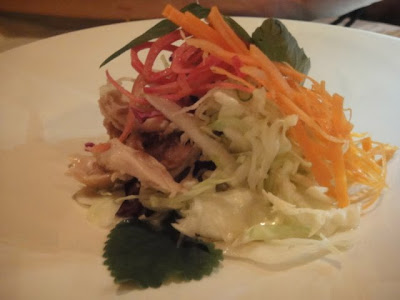 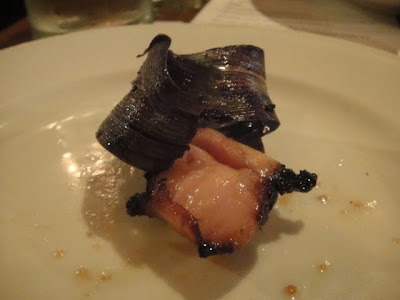 I was excited to see this on the menu because I used to eat this as a kid. Tender chicken thigh was marinated, wrapped in pandan leaf and grilled. As you opened the package, you let out the aroma and juices that are unforgettable. You'll even want to lick the pandan leaf. I did. 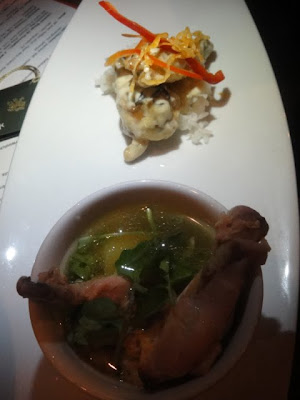 Tran's husband and partner Nguyen explained that this was a "F-You to fancy restaurants that offered something two ways". This definitely showed it to the fancy, overpriced joints because this dish was a winner, and so much better. The common thread is a fall off the bone chicken wing, prepared two ways- in a broth and with coconut milk and rice. The chicken wing soup was soothing and something reminisce of what my mom would make, but with Chinese wine instead of beer. The coconut chicken was out of this world. 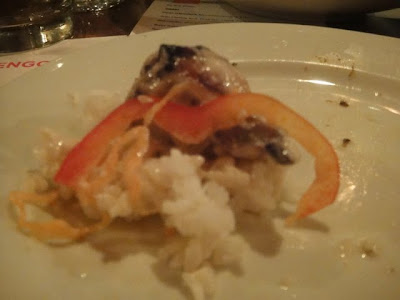 The perfect bite included a piece of marinated, soft chicken with flavorful rice and a creamy coconut sauce. These are authentic flavors of Southeast Asia and I'm not joking, but probably one of the best bites I've had in a while. We later watched as our neighbors took a bite of the chicken and rice, and saw a wave of euphoria overcome them. 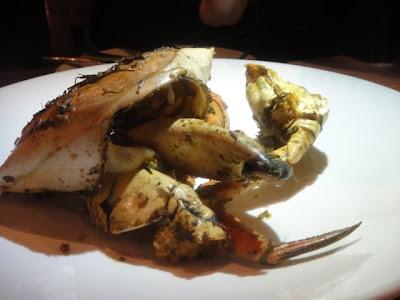 Curry Crab- curry, onions, thai chili w/ garlic.. & love
My impression is that this is probably a cross between the Singaporean chili crab and the Chinese salt and pepper crab. I wish it was the former (with chili sauce doused all over the crab) but it would have been extremely messy to eat. 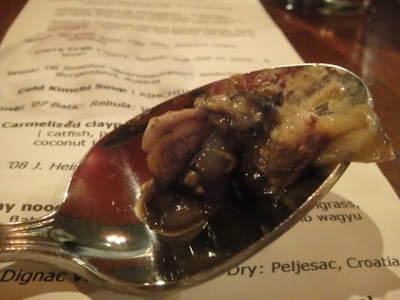 The crab eggs were fishy (in a good way) with a tinge of bitterness. 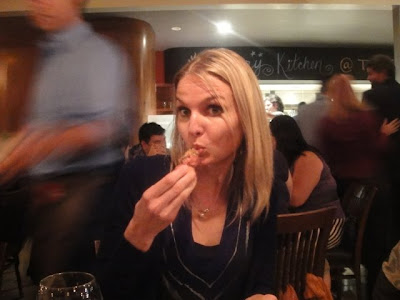 Unlike a seasoned crab eater (my dad and I sit at a table, crack open and eat fresh crabs on weekends), this was Diana's first time trying a whole crab. She did a great job, except for inadvertently consuming a couple shell pieces with the crab meat. 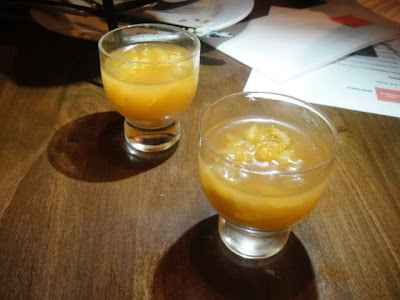 Cold kimchi soup
2007 Batic: Rebula: Viapava Valley, Slovenia
I was the least excited about this dish but it turned out to be very good. It wasn't overly spicy or sour. In fact, it was like cabbage soup and was a perfect palate cleanser before our next salty dish. 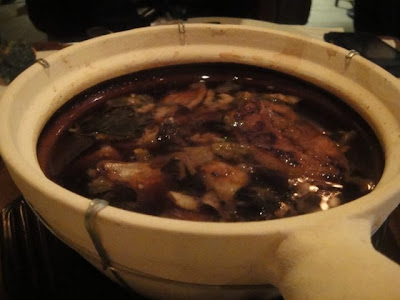 Caramelized claypot catfish & pork belly- catfish, pork belly, fish sauce, fresh young coconut juice, shallots
I loved the presentation of this dish. This is family style for sure. If you are afraid of germs and double dipping, sorry for you. The pieces of catfish were tender and the pork belly was thinly sliced. The broth was very salty and shouldn't be slurped without a side of rice. You could definitely notice the fish sauce in the broth. However I didn't taste any coconut juice in this dish. 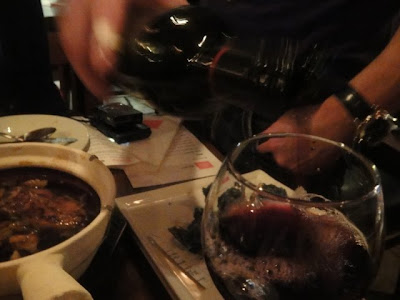 2008 J. Heinrich: Blaufrankisch: Mittelburgenland, Austria
OMG, best wine ever. It was medium bodied and smooth, and an excellent selection to cut the saltiness of the fish soup. I need to find this at a wineshop and stock up ASAP. 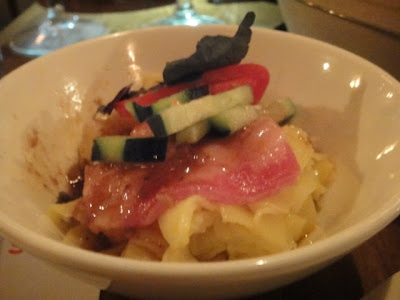 Satay noodles- minced dried shrimp, lemongrass, flat rice noodles & thin sliced short-rib wagyu beef
I loved the flavors of this dish. The dried shrimp added a strong, almost pungent taste to the noodles. The rare wagyu beef was delicate, velvety and marbled. The noodles used were flat rice noodles, similar to what you use in char kway teow (a Singaporean dish). They were a bit mushy and clumped together. Personally I don't have an issue with texture but if you do, you probably might find issues with this dish. Honestly, this is the kind of dish I would love to eat for lunch, although my colleagues would probably not appreciated the strong aroma of the dried shrimp (especially after it's been microwaved). 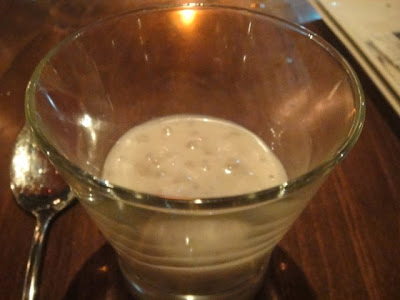 Dessert- Young Banana tapioca in caramel coconut milk
Brasserie Lefebvre "Barbar": Quenast, Belgium: Honey Ale
The last and final course was the perfect end to the amazing meal. I'm usually a chocolate person but you won't find much chocolate in Southeast Asian cuisine. I liked the tiny tapioca pearls in this dish which were a little chewy. The coconut milk was thick, creamy and flavorful. There was the right amount of sweetness you would want from a dessert, but didn't leave you having to up that insulin shot. This dish is pretty similar to the Malaysian dessert burbur cha cha, except that the latter uses sweet potatoes and yam instead of bananas.

I'm still dreaming about my night at Test Kitchen. It was such a unique dining experience from the loud and bustling dining room, to the one-night only menu with items not offered at the restaurant, to the excellent service from our waiter, David Haskell and owner Nguyen Tran. I really enjoyed this culinary journey through Southeast Asia. All of the dishes reminded me of the food I grew up eating in Singapore, but with different variations. You can tell Tran loves to play with flavors and textures, and does so in a very successful manner. If you haven't had this cuisine, you'll be floored with the unique flavors. If you grew up eating this stuff, you'll be floored by how authentic the flavors are. I'm really excited to see what transpires from Tran's expansion (hopefully) to Sawtelle in the Westside. If Starry Kitchen is that close, you can bet I'll be there pretty darn often, stocking up on that delicious Malaysian coconut chicken wing. And tofu balls. And pandan chicken. And tapioca dessert.

Ah! So you're the one dining with Diana! Sorry I didn't introduce myself. Glad you had a great time!

I am dying to try those crispy tofu balls (still!)and of course, jealous that I couldn't join you girls but happy to live vicariously through ya. Ps. You always pick the best cocktails! high 5!

Sounds like a wonderful night and a solid collection of dishes!

I wouldn't let myself read this until I'd posted mine! Hehe. So fun! I really enjoyed wining and dining and crabbing with you! :) Up next -- Terroni!

Minty - hope you see you at the next event. If I ate cheese.. I wuld do mac and cheese crawl..

Anna - I've been sooo into cocktails lately, its the perfect 1st drink!

Liz - the tofu balls were quite unique. I liked the rice crispie-esque coating

Cathy - Really enjoyed the food, I was introduced to so many flavors that I hadnt had in a long time

Diana - thanks for being an awesome dining partner! Looking for to pizzas (for you) and pastas (for me)!

Minty - hope you see you at the next event. If I ate cheese.. I wuld do mac and cheese crawl..

Anna - I've been sooo into cocktails lately, its the perfect 1st drink!

Liz - the tofu balls were quite unique. I liked the rice crispie-esque coating

Cathy - Really enjoyed the food, I was introduced to so many flavors that I hadnt had in a long time

Diana - thanks for being an awesome dining partner! Looking for to pizzas (for you) and pastas (for me)!