A taste of NOLA in LA: Five 0 Four, Hollywood 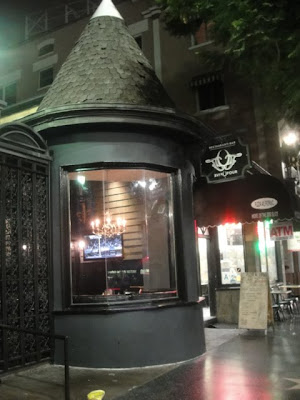 My friend J goes to the Jazz Fest every year and comes back raving about Louisiana food. I'm curious. I've never been to New Orleans and the only Cajun restaurant I've been to is Bourbon Street Shrimp on Pico in West LA, and I guess some might say that The Ivy counts as a Cajun joint. So when I heard that Five 0 Four, a New Orleans inspired bar had opened up in Hollywood, I was excited to see if it was any good. I was excited for some Po' Boys. You know me, I love anything fried. The restaurant is named after the area code in New Orleans. 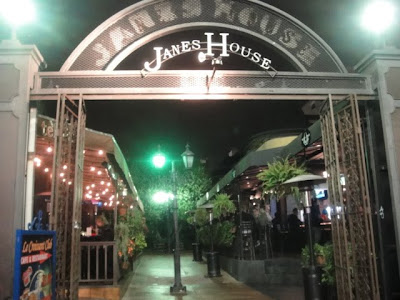 The restaurant bar occupies the old Melograno space in Jane's Square. After living and working in Hollywood for many years, I was surprised to find this little courtyard that houses a couple other restaurants (new spot Te'kila, Le Croissant Club and Jane's House) behind its large gates. I felt like it was a little known secret in the neighborhood that locals were hoping to preserve. 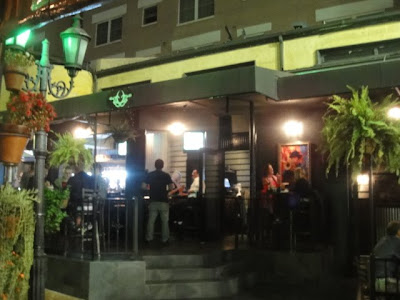 Five 0 Four has a large bar out on their patio, as well as some table seating. Even though I've never been to New Orleans, I can see where the owner and designer Spacecraft Group drew inspiration from. The place has a casual, relaxed atmosphere where the bartenders are chatty, loud dance music is blaring from cheap speakers and there are daiquiri slush dispensers at the bar featuring fun and colorful drinks that you'll know will cause you to wake up with a massive headache the next morning. 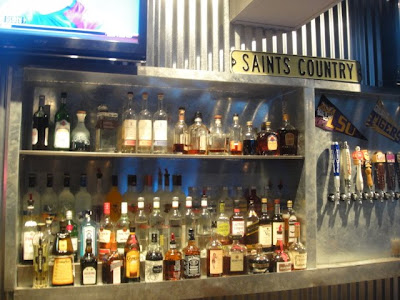 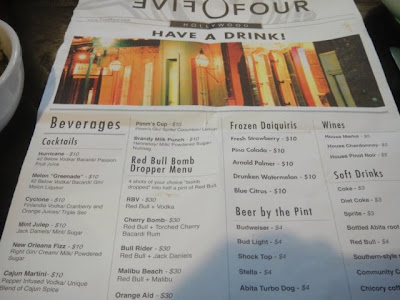 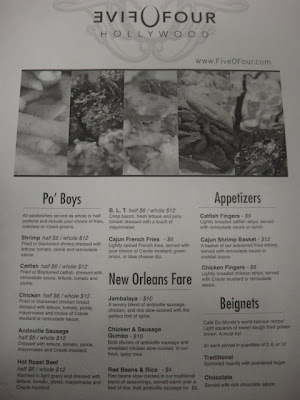 This is still Five 0 Four's soft opening as they are still refining the menu. Apparently cornbread and bread pudding are things to look out for. I'm looking forward to some authentic cornbread. Their official grand opening is next week, but judging from their menu, it looks as though they are pretty much there as they've covered most of the traditional Cajun dishes one would be expecting. 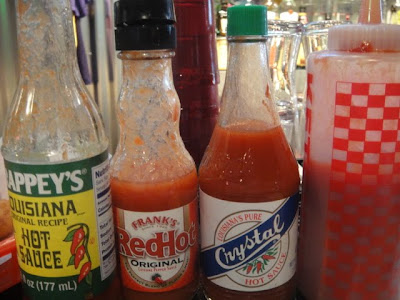 Cajun food has bold flavors but if you need more kick, you can select from an array of hot sauces. 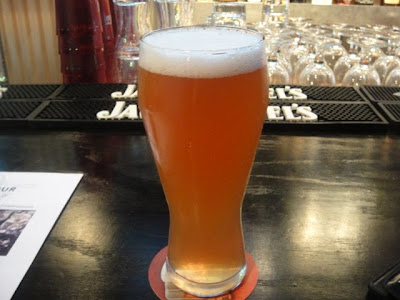 I started with the Abita Purple Haze, which is a light beer with a raspberry finish. 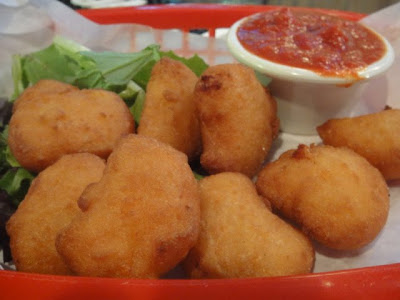 Mac & Cheese Bites were on happy hour. They were filled with cheddar cheese and served with a spicy marinara sauce. They reminded me of pizza bites from the frozen section at the grocery stores. I liked that they added spice to the sauce instead of just serving regular marinara sauce. We quite enjoyed it but it seemed like regular bar grub. Nothing special. Nothing New Orleans. 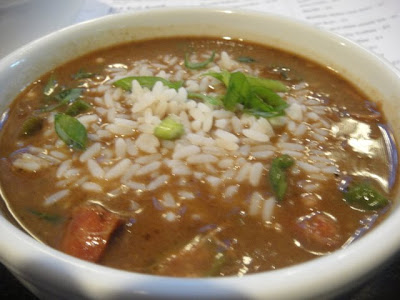 Chicken and sausage gumbo, with bold chunks of andouille sausage and shredded chicken slow-cooked in a thick spicy roux
Although probably not the best gumbo you've had, it's pretty flavorful. I love the idea of rice and sauce. It's filling but so satisfying. The gumbo was spicy and had chunks of hearty andouille, chicken and okra. I just love okra so much. We don't see it often on menus, do we? The dish was aromatic but seemed a bit grainy in consistency. I felt like I was drinking dirt. 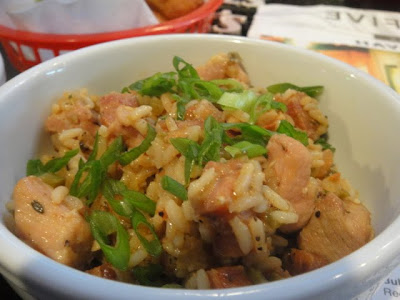 Jambalaya with a savory blend of chicken, andouille sausage and rice, slow cooked with hint of sauce
The combination of meats mixed in with rice reminded me of a Cantonese dish that my mom makes. Of course she omits the creole seasoning and adds soy sauce and chinese sausage instead. The andouille really brought a lovely smokey flavor to the dish. The chicken was flavorful and wasn't dry or rubbery. We just wished that they had included some seafood in the jambalaya since the dishes seemed to be andouille and chicken heavy. 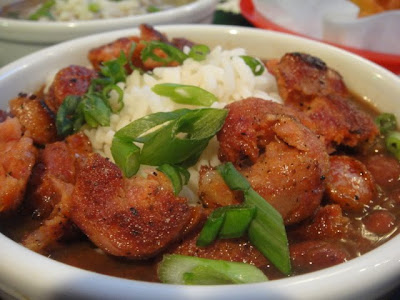 Red beans and rice (add andouille for $3)
A simple dish of rice and beans, accentuated by the rich and spicy flavors of the andouille. The beans however could have been cooked longer. They weren't soft enough. But overall, flavors were there. 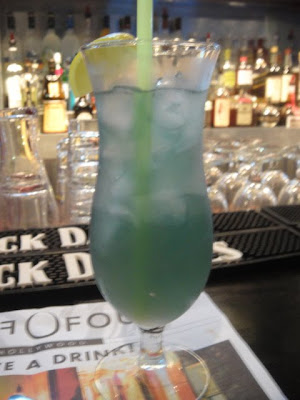 I wanted a cocktail so our bartender suggested the LSU cooler, which is sort of a grape cooler. It had Three Olive Grape Vodka and soda. I didn't care for it. It was sweet and a recipe for a hangover. J compared it to Mountain Berry Kool Aide. Perhaps this is what the coeds on Bourbon Street drink. I obviously don't belong there. 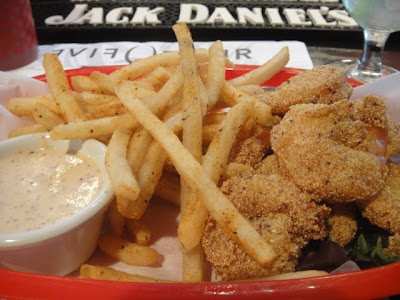 Cajun shrimp basket with seasoned fried shrimp and remoulade sauce
Fries were seasoned with cajun spice but were a bit too starchy. Perhaps the fries had been sitting out for a while before serving. The shrimp itself was cooked well but the breading was cumbersome. I did like the seasoning and texture of the breading, but it crumbled too easily. The minute you held a shrimp in your hand, the delicious breading fell off. As such, we didn't even bother trying to dip it in the remoulade. 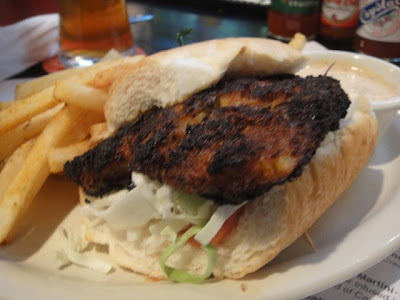 Catfish Po' Boys
I like that you can order half orders of the Po' Boys so you can sample a few if you like. They serve the meat either fried or blackened. We went for the latter. I liked the Po' Boy. The catfish wasn't dry inside and had a nice crust on the outside. It was also seasoned well. The bread wasn't the best (it seemed store bought from the bread aisle) but you can't win them all.

We also ordered some beignets to go. Apparently the recipe is from Cafe Du Monde, the popular cafe in the French Quarter in New Orleans that attracts long lines of customers waiting for fresh beignets. Sounds impressive but J mentioned that you could easily buy the Cafe Du Monde beignet mix online. The beignets were cheap at $1 each (in quantities of 3, 6, 12) 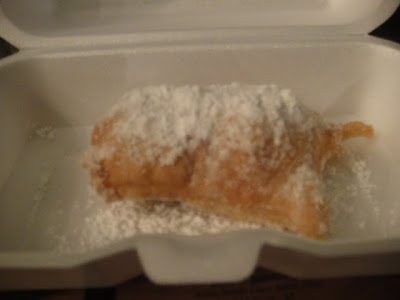 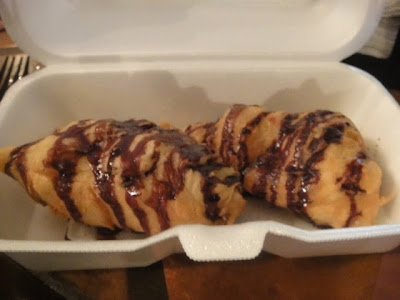 Chocolate beignet was drizzled with rich chocolate sauce was good as well, but could not beat the simplicity of the traditional beignet.

I liked the vibe at Five 0 Four, sans the throbbing house music. I thought the prices were really reasonable for Hollywood. Score for happy hour, but even regular menu prices were affordable. Although this won't be the best gumbo or Po' Boy you'll have, it's pretty darn good for being bar food. I really enjoyed the jambalaya, andouille sausage and beignets. The flavors were good and the spices were kicking. The menu is definitely different from your typical bar fare. The cocktails on the other hand were not that great. There were also some kinks in service (bartender did not tell us about happy hour menu until we asked halfway through our drinks, we were also given the wrong check, and BEWARE.. if you split the bill, the tip suggestion at the bottom of your half is a percentage of the total bill, not of your portion of the bill) but overall, nothing to complain about given that this is a new establishment that hasn't even officially opened. Everyone working there was friendly and welcoming. Five 0 Four is a great primer for Louisiana food. It's just enough to tease your palate and tempt you into purchasing a flight to New Orleans for the real thing.

gumbo on a cold day is the best! the beignets look dangerous.

I actually think I ate there when it was Memphis - also New Orleans type fare. The food was kind of gross though. The biscuits were by far the best part!

This definitely looks more promising. And, um, since when do you eat cheese? (Mac and cheese balls)

Bagnatic - dangerous good yes, and $1 per piece only!