Katsuya, Brentwood: Only if you want overpriced Japanese fare in a clubby scene west of the 405 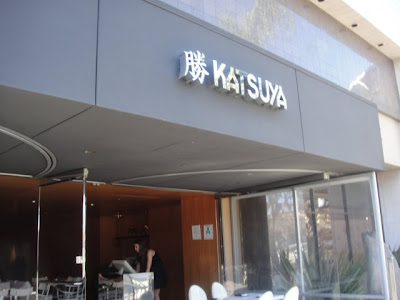 It was Labor Day Weekend. I didn't want to venture far because of holiday traffic. It was also the first proper weekend that I was home at my new digs in Brentwood with no definitive plans. Perfect weekend for an impromptu dinner in the neighborhood. San Vicente Blvd is littered with restaurants- mostly small, upscale restaurants (Toscana, Vicenti, Takao) but also a few chain joints (The Cheesecake Factory, Chin Chin). We decided on Katsuya, the only "trendy/sceney" joint in the area. Don't get me wrong. I love the intimate Italian restaurants in the area, but some times, you want to start the holiday weekend with a nice cocktail at a hip joint. Yes, we live in Brentwood. This is the closest you'll get to a bar scene in the neighborhood.

Katsuya is owned by SBE and also has locations in Hollywood, Glendale and Downtown. The original Katsu-ya (not owned by SBE) is located in Studio City and is known to be one of the best sushi joints in town. It's nothing similar SBE's. The original location only seats about 50 and the decor is simple. No frills. SBE's Katsuya in Brentwood on the other hand, was designed by renowned French designer, Philippe Starck. 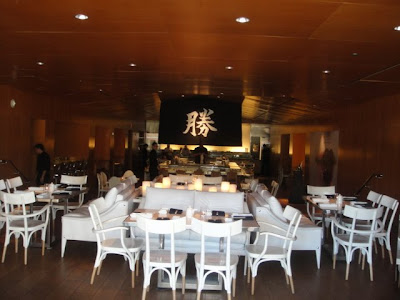 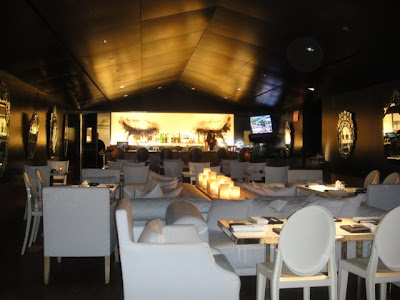 You'll recognize Starck's modern design, similar to his other works at The Bazaar at SLS Hotel and XIV by Michael Mina. 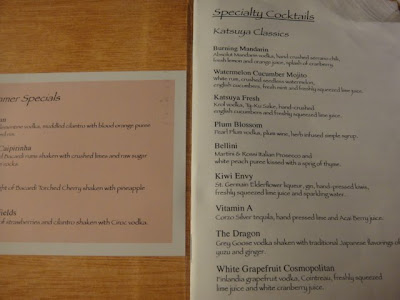 Their cocktails looked great and was exactly what I was looking for. 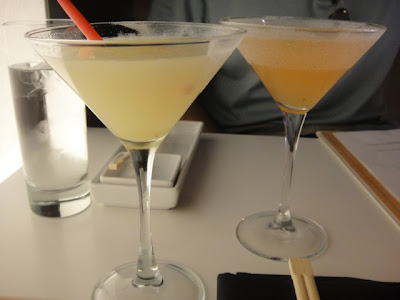 The Dragon (Grey Goose Vodka, yuzu, ginger) was a lovely concoction. The ginger didn't overpower the mild sweetness of the yuzu. It was very drinkable yet packed a punch. The Burning Mandarin (Absolut Mandarin, Serrano chili, freshly squeezed lemon, orange juice and a splash of cranberry) was also a good and unique cocktail with a spicy kick. I liked that their cocktails were Asian inspired and went in line with the theme of the restaurant. I have to hand it to the SBE Group. Their restaurants and bars always serve up delicious cocktails.

The food menu at Katsuya is Japanese and includes sushi, robata and modern takes on traditional Japanese dishes. Since we live so close to many exceptional sushi joints (Hide, Sasabune), we decided not to order sushi and went for their cooked dishes instead. Katsuya also has a decent happy hour at the bar Mon-Fri from 5-7pm. 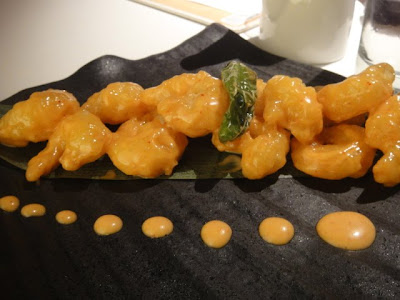 Creamy rock shrimp in Chef's spicy creamy sauce
I've had this dish before at their other locations but I don't remember the bright orange color of the sauce. The color was off putting initially, but the dish tasted good. The shrimp was nicely breaded and had a crunchy exterior. It was also cooked well and wasn't rubbery. A tasty dish but it was pricey at $15. You could get the same dish for almost half the price at an izakaya (such as Izakaya by Katsu-ya). 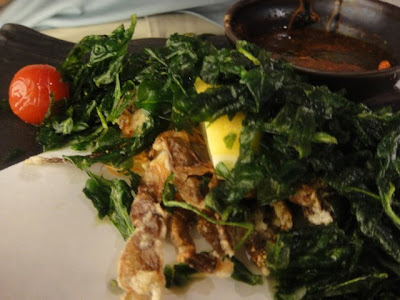 Crispy soft shell crab lightly flash fried on a bed of crispy seaweed with a side of citrus ponzu
I don't think I've met a soft shell crab this season that disappointed me. The crab portion was actually quite generous for a "Hollywood-esque" spot. The shell was crispy and the meat was tender and soft. I really liked the deep fried seaweed which sort of disintegrated once it touched your tongue. Everything was well seasoned so you didn't necessarily need the side of ponzu, although the citrus was a nice welcome. 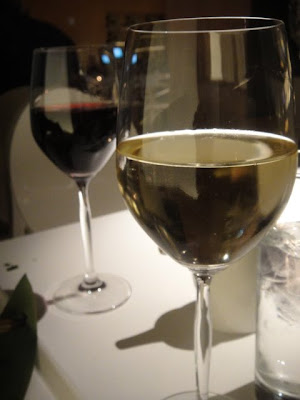 I was so tempted to order another one of their delicious cocktails but decided on wine instead since the night was still young. Yellowtail collar was quite a large serving. It was grilled and served simply with a lemon wedge. I love fish collar. It's so simple and all you taste is fish essence, in a good way. I would have liked for the fish to be cooked a little less because some parts were a little dry. 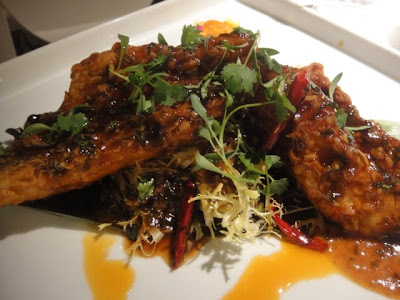 Stripped Baze (yes, they deliberately spelt it that way) half striped bass served with szechuan sauce
This dish was very mediocre and cost us $25. I thought the sauce was too thick and overly sweet. It tasted like something you would get from a cheap, crappy Chinese takeout. The fish itself was also slightly overcooked. 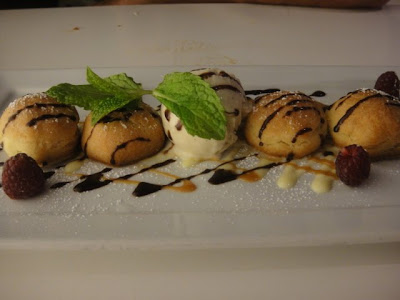 Profiteroles mini cream puff with creme anglais looked pretty but I thought the choux pastry was dry. It didn't taste like it came fresh out of the oven. I did enjoy the ice cream though.

The food wasn't horrible but it was very pricey ($170 for two but including drinks). The cocktails were the strong points, as were the appetizers. I know, I know... you're gonna tell me that I have no one to blame but myself. I should have known that it was going to be pricey and mediocre going in. But I guess.. I've been to the Hollywood locations and yes, the prices were similarly high, but I guess you were also paying for the "scene" and people-watching. There wasn't much of a "scene" at the Brentwood location. Granted we did arrive pretty early but even when we left, I didn't see Katsuya turn into a cool hot spot. When we left we saw tables filled with Brentwood WASPy families and kids. Seriously, if I ever have kids, I ain't spending that much on them. But then again, this is Brentwood. And this is the only "bar" in the area. And you know we ain't driving east of the 405 for anything.

never been to katsuya and it sounds like that's a good idea.

Mmm I want a dragon cocktail. Looks good! Did you see any Kardashian?

I've definitely had those rock shrimp at the Katsuya in the Valley and Izaka-ya by Katsuya on Third, and they never were that orange!

I think I'll still to the no thrills sushi experience. I don't like cocktails anyway. ;)

bagnatic - cocktails were definitely a win. I'd def go back for HH

Diana - If you tried the cocktails, you might change your mind :)