Malibu Fish & Seafood: Fish & Chips are worth the drive 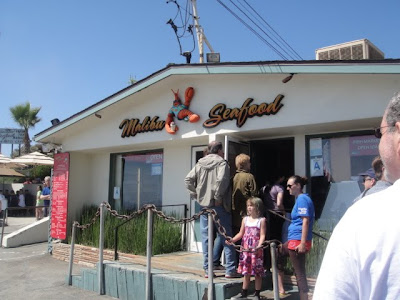 The question that came up this weekend was.. What do you think about when you're on your surfboard, waiting for the next set of waves. My immediate answer? What I'm going to eat for brunch right after. So I was excited when we were in the ocean, talking about hitting up Malibu Seafood for lunch. I've had a craving for fried oysters for a couple weeks now. My long awaited fried oyster meal almost got derailed when my surf session led to a visit to the Malibu Urgent Care after my fin sliced above my eye. After a tetanus shot, seven stitches and a black and blue eye, I was still in high spirits because I knew we were headed to Malibu Seafood. I didn't need a hug, I didn't need any presents, I didn't no sympathy. All it took was good food to make things better. 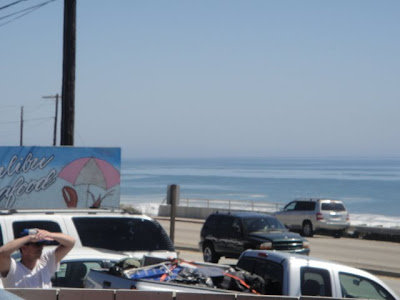 Located right on PCH near Pedderdine University, Malibu Seafood is the perfect spot to stop for a bite during a weekend drive up the coast. It's casual with a beachy vibe, and is both a fish market and a dining spot. 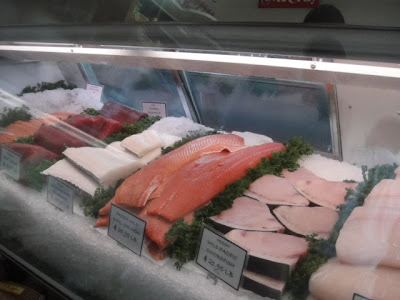 Besides the fresh seafood, Malibu Seafood has another strong point - BYOB. My weekend drink of choice is usually mimosas but you gotta drink beers with fried food. 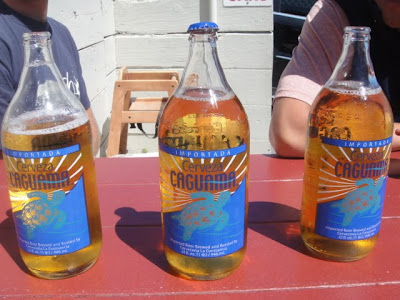 We picked up some Caguama beers from Ralphs down the street. 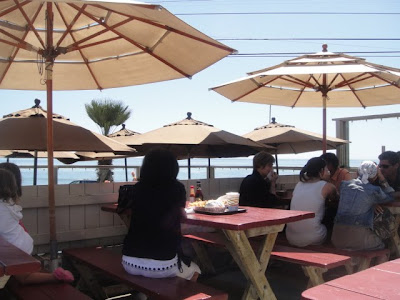 You queue up to order (the line was out the door but it moved relatively quickly), grab seats at their ample outdoor picnic tables and pick up your order when it's called out. Told you it was casual. 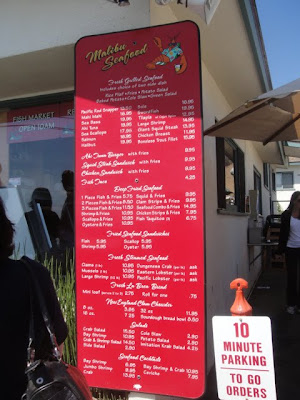 The menu includes a variety of fresh and fried seafood. There were so many things on the menu that I wanted (grilled dover sole, sand dabs, scallops, steamed mussels, ceviche) but I knew I had a fried oyster craving to quell. 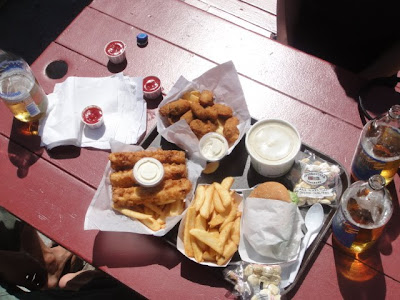 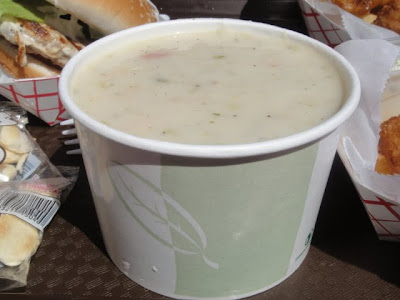 Clam chowder (16 oz), you could also order 8 oz or 32 oz.
I liked this chowder, it wasn't thick or starchy like what some seafood restaurants serve. There was also a good ratio of clams and potatoes. 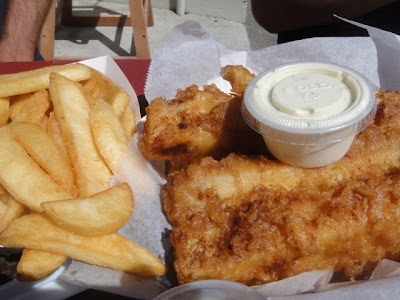 Fish and chips
You can order 1, 2 or 3 pieces of fish. I've had many a fish and chips in my life and I have to say that this was definitely up on my list of favorites. The breading was fried to a golden brown perfection and crunchy on the outside. Each piece of cod was large and the fish was soft, flaky and delicate. Usually frying a fish can mask the piece of fish, but you could tell that the cod was very fresh. The fries were also good despite not being my favorite skinny fries. I thought the prices were very reasonable. The 1 piece and fries was only $5.75 while the 3 pieces was $11.50. 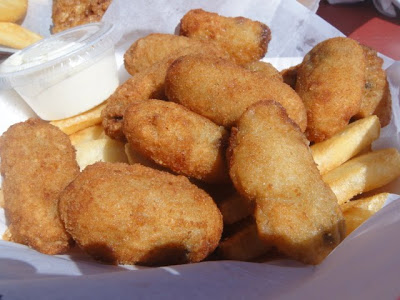 Fried Oysters and fries
Visually, this wasn't what I was expecting. They looked like jalepeno poppers instead of oysters. 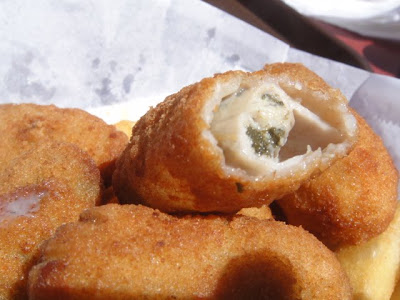 The oysters were a good size, juicy and plump. As I bit into it, briny juices flowed out off the poppers to my delight. They definitely had a strong taste of ocean (which I love) but it's not for everyone.

Ahi tuna burger
The burger patty was made with ground tuna and spice (it's not served as a seared tuna filet). The patty was well seasoned and juicy. The tomato slices and lettuce were fresh and not sweated, although there was a touch too much mayo. This is a delicious alternative to a fried seafood dish.

Malibu Seafood was the perfect lunch spot after a surf down the street. The location is pretty awesome with the gorgeous views of the ocean and a picnic area where you can catch some rays. It's really not that far from the Westside when there aren't any accidents on the 405 (18 miles from Brentwood) and is the perfect weekend afternoon stop on your drive along the coast. The seafood was fresh and reasonably priced. The fish and chips were excellent, and BYOB rocks! If you're looking for the quintessential SoCal beach meal, Malibu Seafood is the place for you. If you're in need of some awesome grub after a day out in the ocean, look no further. Or if you're looking for something comforting after getting stitched up by the doctor, you won't be disappointed.

My friend loooves the fish tacos there. Haven't been yet, but I do love the sound of BYOB...

Glad you were okay after your accident! Was worried when I saw your tweet.

Diana - thanks for your concern! I am offically back to normal now, sans stiches and black eye :)