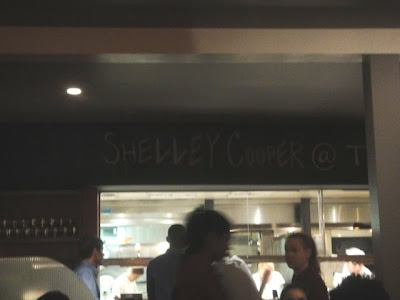 When I heard about the Downtown Supper Club First & Hope opening up this year, serving small plates of Southern comfort food from Memphis chef Shelley Cooper, I was excited. I mean, what's there not to like from the region that popularized fried chicken, fried oysters and grits. Unfortunately, given First & Hope's location in Downtown, I haven't had the chance to make the trek over. SIV seemed to enjoy her meal in July. But in the wink of an eye, Cooper departed from the restaurant. So it's with little surprise that she popped up at Test Kitchen, LA's temporary kitchen for chefs (some of them restaurant-less) that are testing out menu items for their impending restaurant. This isn't a amateur production. Visiting chefs have included Walter Manzke (Church & State), John Sedlar (Rivera), Ricardo Zarate (Mo-Chica), Michael Voltaggio (Langham), Neal Fraser (Grace), Jordan Kahn (Red Medicine) amongst others. 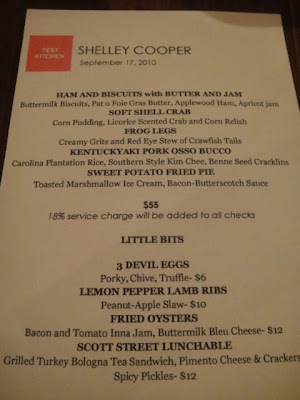 The menu included 5 courses for $55 with a couple side items for an additional charge. We decided on the tasting menu plus two from the side menu. 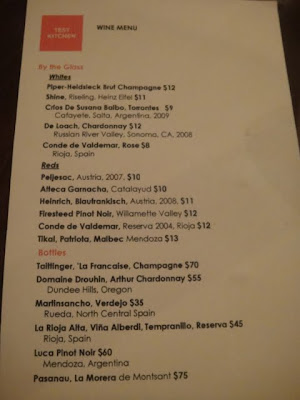 A wine list was offered with dinner but it's hard to bypass the cocktails especially with mixologists Aidan Demarest (The Edison, First & Hope) and Joel Black (Comme Ca and Cana Rum Bar) in the house. 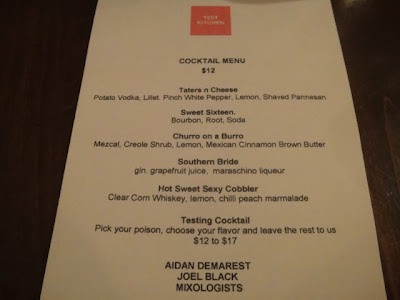 I liked that they had a create-your-own option because I love to customize my own drinks. 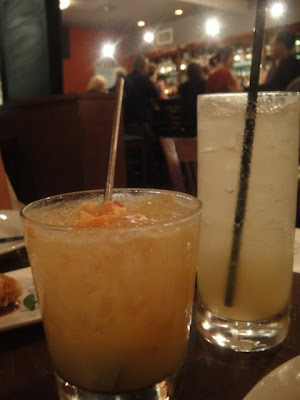 Hot sweet sexy cobbler on the left (Whiskey, lemon, chili peach marmalade) and a customized cocktail of vodka, citrus and ginger. Both very good cocktails, especially the latter. I just can't get enough of the vodka ginger combo. Have tried to make it at home but ended with massive failure. 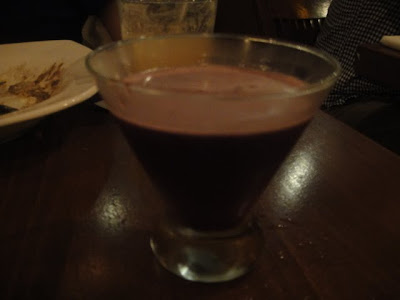 My next cocktail was also a customized one -Vodka blueberry and citrus. 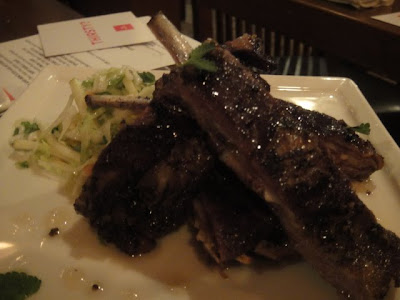 Lemon Pepper Lamb Ribs- Peanut-Apple Slaw
I liked the peppery flavor of the lamb but I thought the ribs could have been more tender. They were surprisingly a tiny bit greasy which I noticed after trying to rub the oil off my lips. The slaw added a nice crunch and freshness to the dish. 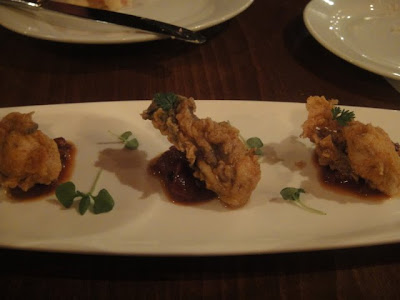 Fried Oysters- Bacon And Tomato Inna Jam, Buttermilk Bleu Cheese
I think I've said this a million times but I love fried oysters. In fact, I much prefer them to fresh oysters. These were plump and briny and perfectly fried. I also liked the pairing of sweet jam with chunks of bacon. Fresh horseradish was grated table side to add additional kick. 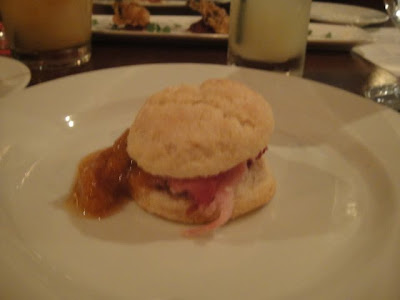 Ham And Biscuits With Butter And Jam- Buttermilk Biscuits, Pat o Foie Gras Butter, Tennessee Country Ham, Fig Jam
I thought all the flavors worked really well together. The buttery biscuit with the sweet jam, the smokey ham and the judicious amount of foie. 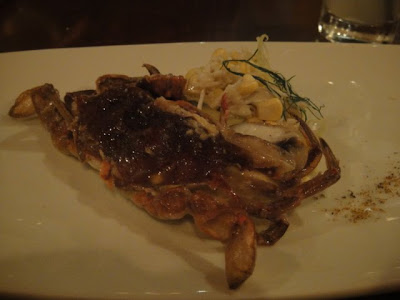 Soft Shell Crab- Corn Pudding, Licorice Scented Crab And Corn Relish
The crab was flown in from the east coast that morning and it smelt delicious when it was served. It was sauteed not fried, which resulted in a very chewy texture. I'm used to the crab shell crumbling in my mouth (like when it's deep fried) but some how this was difficult to consume. The crab salad was seasoned with licorice oil and fennel which I quite enjoyed as it was light and fresh. The best part of the dish for me was the corn pudding that sat under the crab. It had a creamy consistency with the right amount salt, butter and sweetness from the corn. The pudding was terribly comforting and I just couldn't have enough of it. 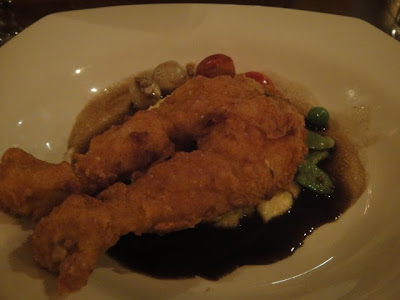 Frog Legs- Creamy Grits And Red Eye Stew Of Crawfish Tails
I've never had such large frogs legs before. They were like kermit's butt but bigger. I loved the crispy breading which reminded me of beer batter fish and chips. The meat itself could have used a bit more seasoning but it was cooked perfectly (it's easy to over cook frogs legs you know, says cheftestant Kelly Liken from Top Chef Season 7). It went well with the salty crawfish sauce. The grits were creamy and flavorful, and was exactly what I was expecting from soul food. 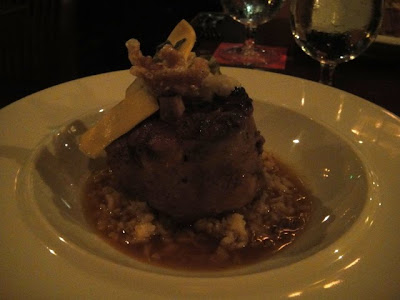 Kentuckyaki Pork Osso Bucco- Carolina Gold Rice, Southern Style Kim Chee, Benne Seed Cracklins
The osso bucco was hearty and tender but not fall off the bone (I've had better). The spicy kim chee was a good agent to cut the heaviness of the meat. The sauce was infused with so much flavor so I was glad that they included rice to soak up all the goodness. I like the concept of rice cracklings but I thought they were too hard, and ended up poking the roof of my mouth when I tried to eat it. 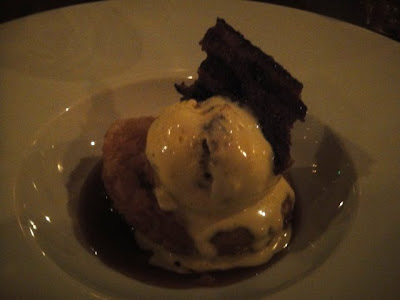 Sweet Potato Fried Pie- Toasted Marshmallow Ice Cream, Bacon-Butterscotch Sauce
If this is what people eat in the South, I might have to consider moving there. It smelt just like fresh donuts. The potato pie crust was buttery puff pastry which crumbled in your mouth. The sweet potato interior was actually rather soft and buoyant. I also really enjoyed the marshmallow encapsulated ice cream. A piece of candied bacon added a crunch to the dessert and you could also use it as a spoon to scoop a bite of ice cream. Lastly, caramel sauce added another layer of richness to the dish. I thought this was such a unique dessert and with all the chocolate cakes, creme brulee, bread puddings out there, this was such a nice welcome.

This was the type of comfort food I was hoping for. You definitely felt satisfied leaving the restaurant. I especially enjoyed the preparation of the frogs legs with grits, and the dessert was absolutely delicious. After sampling Cooper's menu, I'm looking forward to checking out her future ventures. After all, LA really needs more Southern comfort food joints, serving food with a bit of class and a bit of home.

That dessert looks amazing! Anything that smells like fresh donuts is a-okay with me. :D

I was there for the Saturday dinner and loved it! The ham and biscuits were good but none of us could really taste the foie...maybe you got it all :). Totally agree about the corn pudding. I hope chef Cooper opens her place soon -- we need this!

Kermit's got back! WOW! Look at those legs! I've never had frog legs before and now I have a visual of some terantulous daddy long leg frog. Definitly not keropi, who has no legs. And nice dessert there (and cocktail choices, as always).

Diana - the dessert was everything I would imagine of southern comfort food!

Daniel - I know.. this is the type of food that I crave!

Loohire - i know, lots of good meats huh? when i first looked at the menu online, I knew this was my kind of dinner.

Anna - seriosuly, the frogs legs were kind of scary.. i can only imagine how big the frog was! gross!!