I love dining out on Mondays. It helps me get through the start of the work week. I love (even more) cheap dining deals, offering good food with lots of options. So yes.. even though Cabo Cantina has 2 for 1 drink specials, I'll pass, thank you. Delphine at the W Hotel in Hollywood is more my kind of place. Delphine is a brasserie that opened up this year, with Sascha Lyon (Daniel, Balthazar, Pastis) heading up the kitchen.

On Mondays, Delphine offers their Raw Bar Menu from 5-10.30pm. That means cheap, fresh seafood eats. It runs all evening so you don't have to rush over at 6pm. It's offered throughout the restaurant so you don't have to fight for seats at the bar. You can even make reservations. It's not potato skins and nachos on the menu so you won't felt like you'll need to hit the treadmill when you get home. 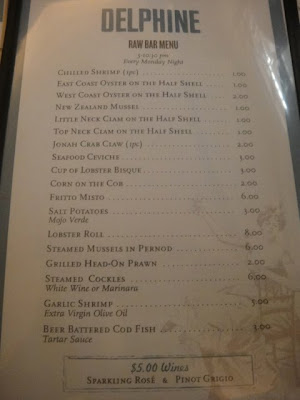 The menu not only offers raw oysters, clams, mussels and shrimps, but cooked seafood items as well. 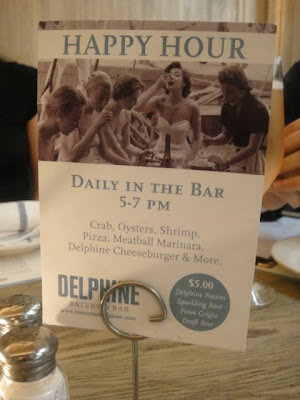 They also offer their regular Happy Hour daily from 5-7pm. 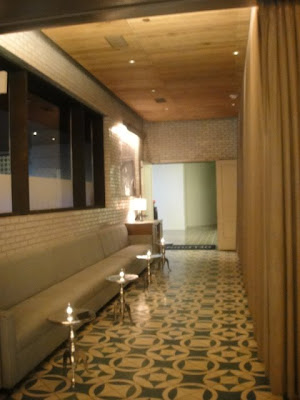 The interior is chic and modern looking, with lofted ceilings, wicker seats that remind you of the cote d'azure and trippy patterned tiled flooring (I got a bit dizzy). 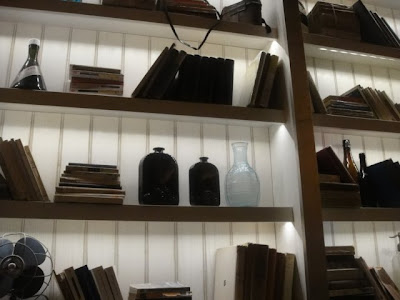 We were seating in the Living Room section on trendy banquettes. 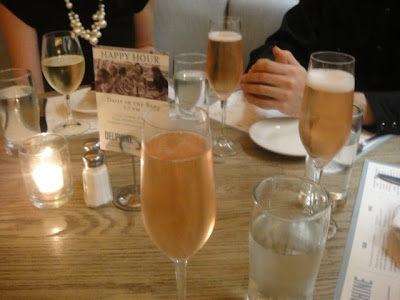 $5 Sparkling Rose or Pinot Grigio was an excellent start. I really enjoyed the Rose, and anything with bubbles wins! 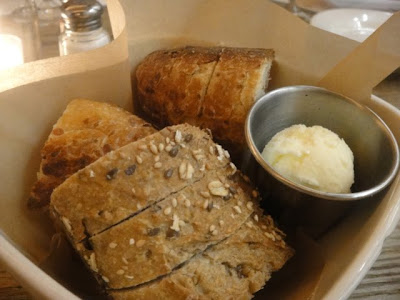 Their fresh warm bread was actually really good. I especially liked the cheese bread. It was fragrant with a cheese flavored crust and sourdough interior. The multi-grain was also good. 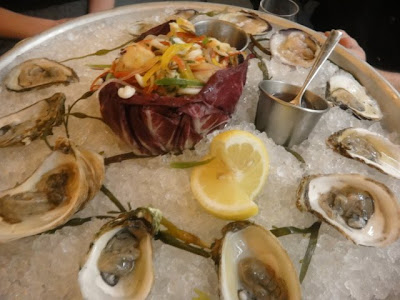 Our fresh shellfish selection included East Coast and West Coast Oysters, and Little Neck and Top Neck clams. All were $1 each except for the larger West Coast Oyster at $2. You really can't beat the price, I really enjoyed my sweet clams. The ceviche was a combination of two orders and was well marinated with lots of citrus and some heat. This is actually a very guilt-free meal, both on the waistline and the pocketbook. 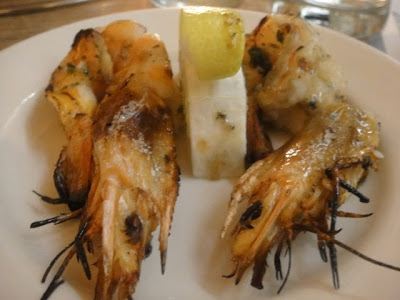 Grilled prawns with head on was nicely seasoned. The best part of course was the prawn head. I had no qualms sucking out the brains, even at Delphine. Hey, they served it on the plate for a reason. 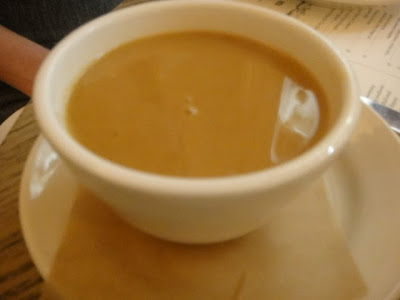 Lobster bisque was very tasty as well. It wasn't thick or too salty. 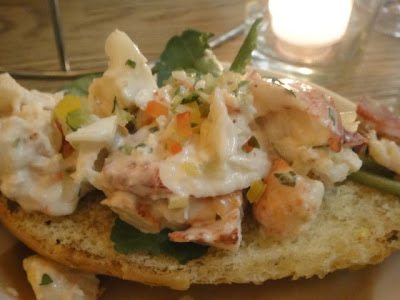 Lobster roll
After reading LAist's writeup on their mayo heavy lobster rolls, I came prepared and asked the waitress to prepare the lobster roll light on mayo. The large chunks of lobster meat seemed fresh, but it was lacking in seasoning. I actually really liked the bread which tasted as airy and buttery as brioche. It held it's crispness and didn't get soggy. 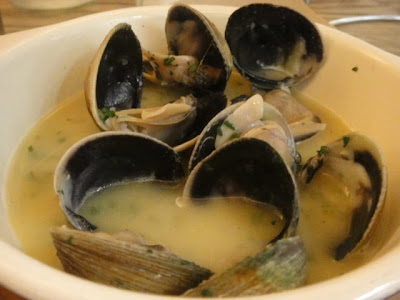 Steamed cockles in white wine
Not many people had heard of cockles until the Top Chef episode in Singapore. I, on the other hand, grew up eating it in the Singaporean dish char kway teow. Cockles look like clams, but I think they taste more like oysters. There's a distinct brininess to them. The garlic, parsley and wine broth was divine. I couldn't stop dipping bread to sop up all the essence. 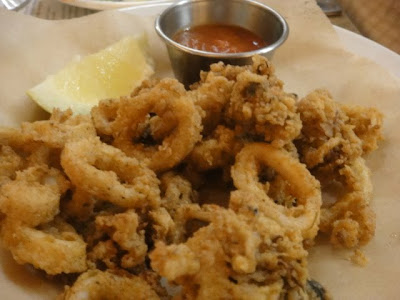 Fritto misto is something you can order at most restaurants, but I appreciated that the breading was light and crispy, and not greasy. 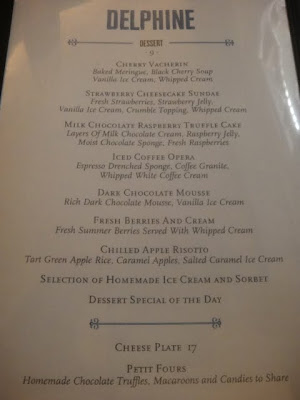 There aren't happy hour prices for desserts but they looked too good to pass up on. 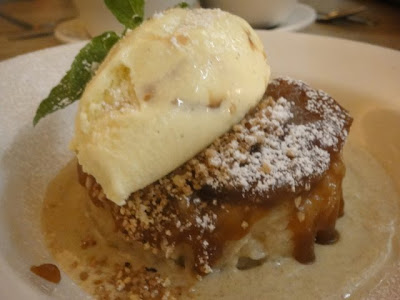 Chilled apple risotto with tart green apple rice, caramel apples, salted caramel ice cream
Wow, I was floored. This is nothing I've ever eaten before and I don't normally even like fruit desserts. It kind of reminded me of a combination of rice pudding/bread pudding/apple crisp. The risotto was soft and absorbed all the rich sauce. We were all fighting for the ice cream which had chunks of crunchy salted caramel. 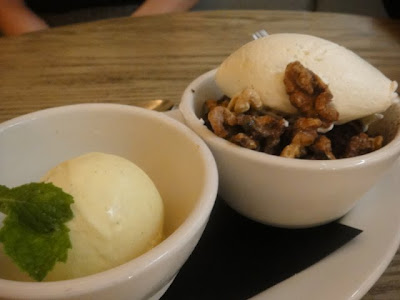 Dark chocolate mousse with vanilla ice cream
Odd that they served this in two separate bowls. The chocolate mouse was light and silky, and the walnuts added a nice texture.

The food was good and I liked that there were a lot of options. The prices were affordable but you didn't have to sacrifice ambiance (i.e. stuck at a coed bar that smells of puke). The service was also pretty attentive. The bill came out to $130 for our party of 4 (they had already included a 15% service charge but we ended up adding an additional 10% on top). Delphine's Raw Bar Mondays is topping my list for Monday events. With a night like this, Mondays will start to become more tolerable. Especially after a couple glasses of Rose and an apple risotto dessert.

YUM! Did not think a place like Delphine would have happy hour raw bar specials. Gotta check out sometime, thanks for the heads up!

Wow.. i absolutely love seafood and had NO idea that Delphine had this great special! thanks for the post! everything looks sooo delicious.. and i love cockles too! lol

Marie - yes! it's such a good deal and not your typical greasy unhealthy HH food.

nelehelen - thanks for reading! I havent seen cockles anywhere so I was stoked to see it here!