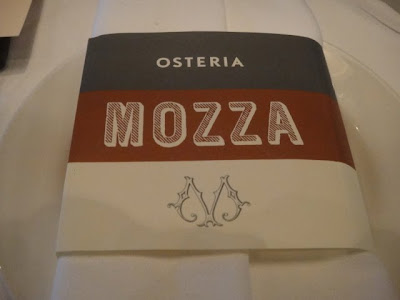 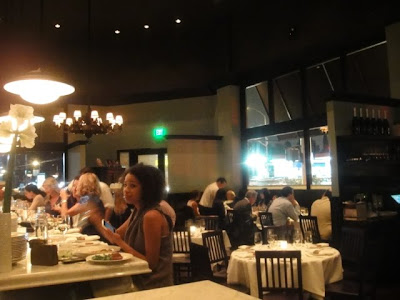 Mozza is owned by Nancy Silverton (La Brea Bakery, previously of Campanile), Mario Batali (Babbo), and Joseph Bastianich (Batali's long time business partner). The Mozza family has expanded to include the Pizzeria, the formal Osteria, take out Mozza2Go and private dining room Scuola di Pizza. Like any traditional Italian family, all four are located under the same roof. I've enjoyed an amazing duck dinner at the Osteria (pre-blog days) and pizza at the pizzeria (yes, I hate cheese but Mozza turned me on to pizza, for one day) but they definitely weren't cheap meals. Enter Amaro Bar.

Osteria Mozza's Amaro Bar has been on my list for a long time after reading entries from Diana takes a Bite and Gastronomy. I mean, what's there not to like? It's Mozza. It's a 3 course dinner. It includes a glass of wine. It's a steal. 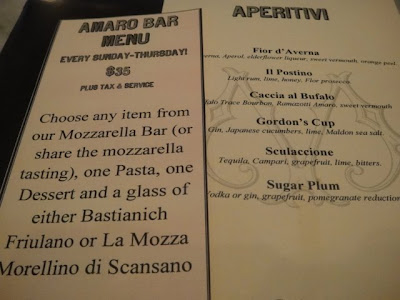 For $35, you get a choice of mozzarella, pasta, dessert and a glass of wine. Mozzarella, you ask, but it's cheese? And stuffy cheaks, you don't like cheese. Yes, it's true, I don't like cheese that is melted/greasy (pizzas, lasagne) or pungent/stinky (gorgonzola, bleu, stilton). But somehow, I'm OK dabbling with fresh mozzarella (not more than 1-2 bites), hard cheeses (shaved Parmesan) or processed cheese (Kraft's Mac & Cheese, nacho cheese dip). I know.. it's complicated but you'll get it the more time you spend dining with me. 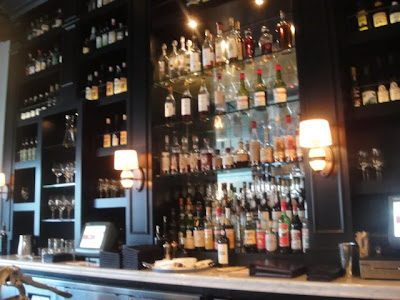 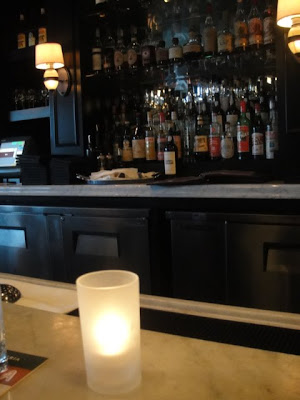 The special is offered Sunday - Thursday and only at the bar, where no reservations are taken. But if you get there before 7pm, it shouldn't be a problem. It started to fill up by the time we left at 8pm.

I decided to start with an aperitif because I knew one glass of wine was not going to be sufficient. 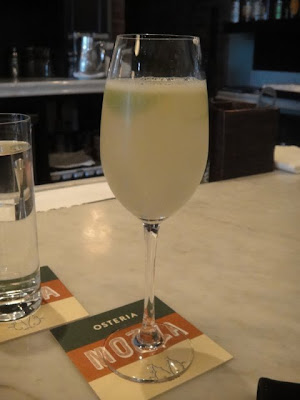 Il postino (light rum, lime, honey, Flor Prosecco)
The lime and bubbles were refreshing. I was a bit nervous that the rum would overpower the prosecco but it really was light. 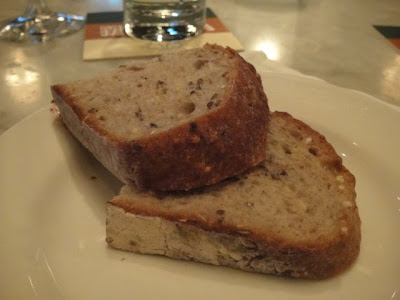 A selection of bread (wheat, multi-grain, sourdough) from La Brea Bakery was served. 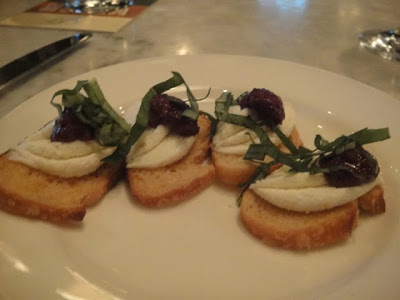 Amuse Bouche: Crostini of ricotta, olive tapanade and basil
The cheese was light and mild flavored, and teased the palate with promise of more mozzarella to come. The olive added saltiness to the amuse while the basil was aromatic. 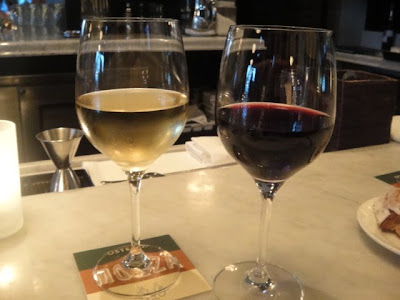 Choice of either the Bastianich Friulano or La Mozza Morellino di Scansano. The Friulano was light and fruity, and a good pairing with my seafood entree. 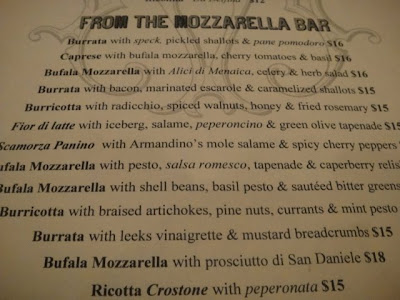 Choosing from the long Mozzarella menu was quite a feat. Thankfully there were four of us so we were able to get a taste of more than one dish. Our bartender was very helpful with his suggestions. 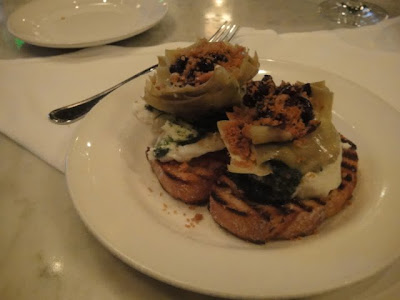 Burricotta with braised artichokes, pine nuts, currants & mint pesto
Loved the presentation of the artichoke hearts perched on top of the mozzarella. 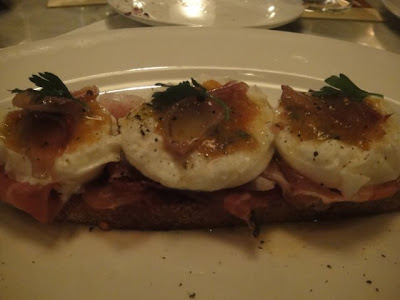 Burrata with speck, pickled onions and pan pomodoro
I was surprised with such a large portion for an appetizer. The burrata was creamy and mild, the speck was smokey and salty, the onions were tangy and the fresh tomato rubbed on the crostini added a sweetness to the dish. There were lots of flavors in this dish but they all worked harmoniously. 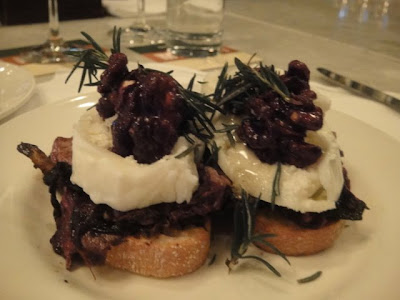 Burricotta with radicchio, spiced walnuts, honey & fried rosemary
The burricotta had a chalkier texture (like tofu) compared to the creamier burrata. My friend described this dish to be as warm as the holidays. It was hearty and filled with spices. The radicchio was wilted and so flavorful that I mistook it for meat. The walnuts added a crunch to each bite. 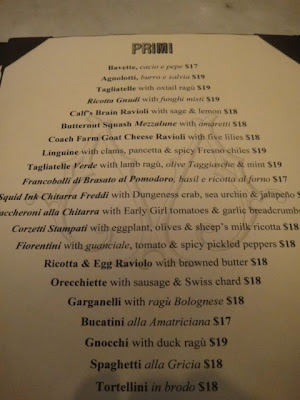 Similar to the mozzarella menu, we got to choose from a large list of pasta dishes. With over 20 pasta dishes, it was quite difficult to pick just one. 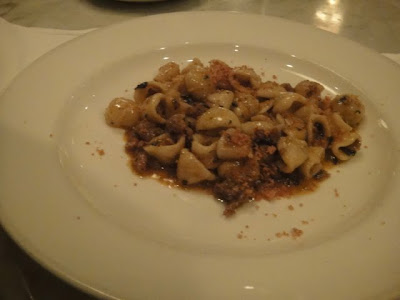 Orecchiette with sausage and Swiss chard
This is one of the restaurant's most popular dish. The portion looked small but the crumbled and stewed sausage was hearty. The breadcrumbs also added texture to the dish. 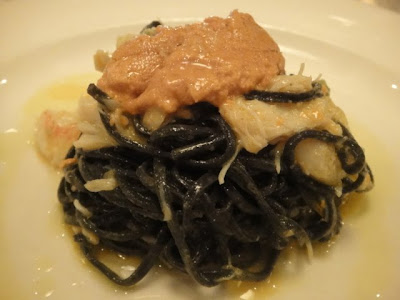 Squid Ink Chitarra Freddi with Dungeness crab, sea urchin & jalapeno
I knew right away when I reviewed the menu online, that I wanted to order this. Squid ink pasta and uni are my favorite pasta combination dish. I liked the dark richness of squid ink pasta which was a gorgeous contrast against the bright colored sea urchin. Unfortunately, my love for the dish stops here. I wish I knew Italian because apparently Freddi means cold. And this dish was. Because it was a cold dish, it seemed almost like a pasta salad. I was missing the warm and comfort that I expect from a bowl of pasta. Also, the sea urchin seemed more of a garnish than a component of the dish. I tried mixing it into the pasta to infuse the dish with briny urchin flavor, but somehow the flavors didn't transfer. I guess I was disappointed because this wasn't what I was expecting. I was hoping for creamy sea urchin sauce with tiny chunks of urchin that clung on to each stand of pasta. I was missing Blue Marlin's uni pasta. 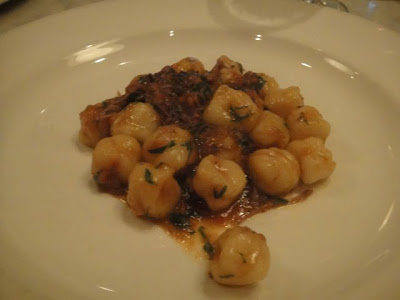 Gnocchi with duck ragu
Like any good gnocchi, Mozza's was pillowy and soft, not doughy. The portion looked tiny but in actuality was just the right size. The ragu was rich in flavor but wasn't too heavy. 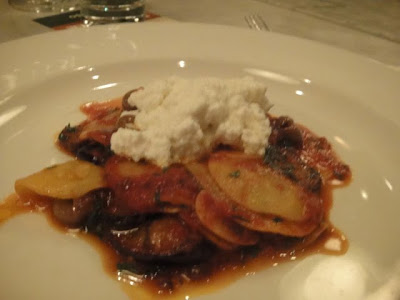 Corzetti Stampati with eggplant, olives & sheep's milk ricotta
Corzetti is a round shaped pasta that's stamped and embossed. I liked that the pasta was thin and flat, which reminded me of round lasagne sheets. I didn't care for the sauce but I'm biased because I don't like olives. I thought the olives gave the sauce a sourness that I didn't appreciate. My friend did however enjoy the dish. 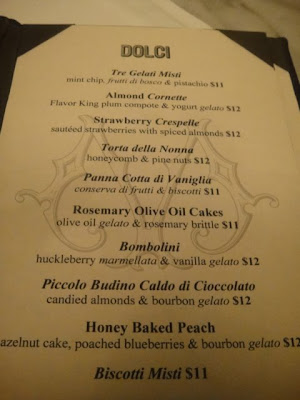 Last but not least, dessert. 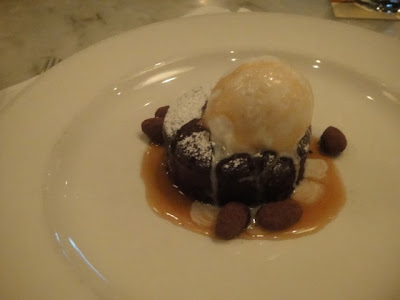 Piccolo Budino Caldo di Cioccolate with candied almonds and bourbon gelato
The traditional and more common budino is in the form of a pudding. Even Pizzeria Mozza's popular butterscotch budino dessert is served as a pudding. Instead, Osteria's budino was in the form of a molten cake. It was hot and soft inside, oozing with rich chocolate when you broke into it. The bourbon ice-cream was a nice touch although my friend said it was too strong. Guess she's not a lush like the rest of us. 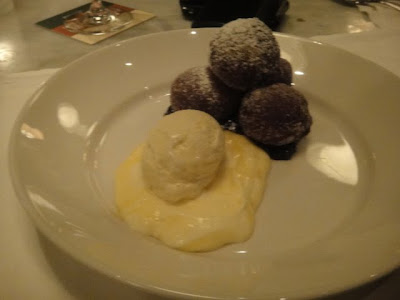 Bombolini, huckleberry marmellata & vanilla gelato
The round donuts were nicely crusted on the outside and soft inside. There was supposed to be ricotta in one of the bombolini but I didn't notice any. I thought the dessert was good but I didn't really care for the lemon curd under the ice cream which was too tart. The curd actually ruined it slightly for me. I thought the chocolate, powdered sugar and ice cream would have been sufficient. 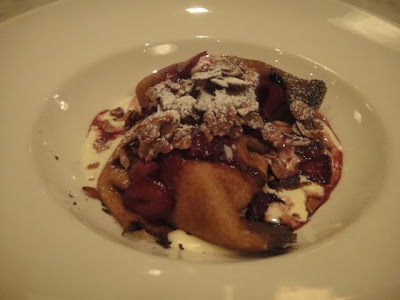 Strawberry Crespelle, sauteed strawberries with spiced almonds
A crespelle is an Italian crepe. I'm usually more of a chocolate dessert person but I enjoyed this dessert. The crepe was soft and the strawberry creme fraiche mixture was light and not too sweet.

All I can say is, what a deal. $35 gets you a complete meal with drink. You get to dine at Osteria Mozza without committing to a reservation (they asked for a credit card to hold a reservation in the dining room). And the food is good. The portions were also generous. When the pastas came out, I thought they looked small but in fact, they were the perfect portion and rather substantial. I was surprised by the size of the mozzarella starter and desserts. That, plus the bread and amuse bouche made a very complete and filling meal that even 6 footer guys would walk away full from. I know. We were with two. I also preferred sitting at the bar because it's more casual, you received attentive service from the bartender and no one glared at you when you shared plates across the bar. Not even at Mozza. I also liked that you had a choice from a large list of options unlike some places that only offer 2-3 items for prix fixe. As such, even after a night of sampling at the Amaro Bar, there were still many items that I wanted to try. Don't fret if you can't decide on a favorite on your first visit. You can always go back. I know I will. Next week.

yum yum yum! i went with diana one of those visits and it became my favorite restaurant. too bad about your squid ink pasta but at least the other stuff was good?

Anna - yes! everything else was exceptional. Loved the burratas, the meat pastas and of course, the desserts. Going back again this week :)