As a avid meat eater (I tend to shun anything veggie and "healthy"), I've always wanted to dine at Saddle Peak Lodge. I've heard about their exceptional game dishes. In fact, SIV recently wrote a rave review of the restaurant. Unfortunately, it's location (Calabasas) has always thrown a wrench in plans to visit. It's not like its that far away. 20 miles from Brentwood. It's just that a memorable meal at Saddle Peak would have to be paired with a lot of fine wine, and unfortunately wine + PCH really don't mix. So when I saw that Executive Chef Adam Horton was cooking at Test Kitchen, I immediately made a reservation. I was excited that he would be cooking 6 miles from my place, with no windy freeways with poor lighting en route. I was even more stoked when the menu was released. The anticipated game dishes (boar, elk, buffalo) were mixed in with some lighter fare (fish, chicken).

Horton has accomplished a lot in his 26 years. He graduated from Le Cordon Bleu, spent some time working in Europe and at LA's Melisse before settling in at Saddle Peak Lodge. The restaurant is a dining establishment and has been around for over a century. The menu is sophisticated yet rustic and very classic. As such, Test Kitchen is the perfect avenue for Horton to explore molecular gastronomy and creative modern styles in his dishes that might not necessarily be in the same vein as the cuisine at Saddle Peak.

The theme of the night was rightfully "The Modern Face of Saddle Peak Traditions", a young and talented chef's spin on classic dishes. 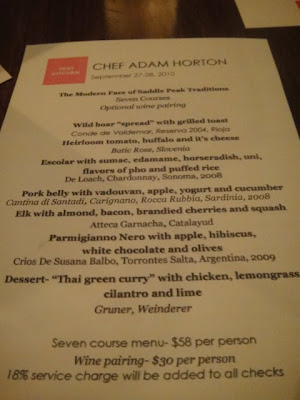 Seven courses were priced at $58 per person, which is a steal considering that the four course tasting at Saddle Peak costs $85 (and eight courses for $135). 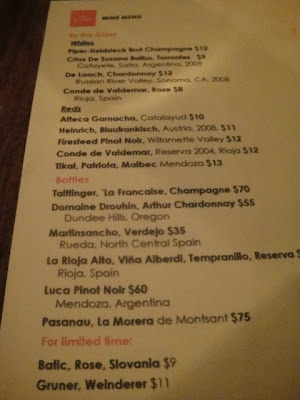 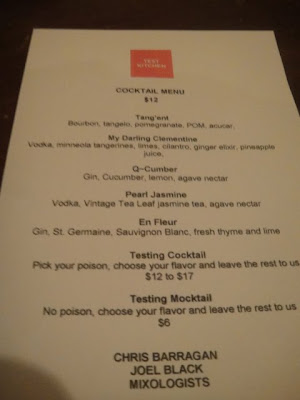 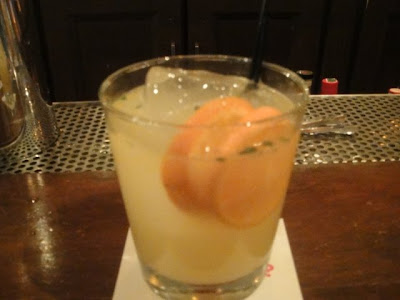 My Darling Clementine (Vodka, tangerines, lime, cilantro, ginger elixir, pineapple juice)
I loved the combination of the various citrus flavors with a touch of cilantro that wasn't overwhelming. 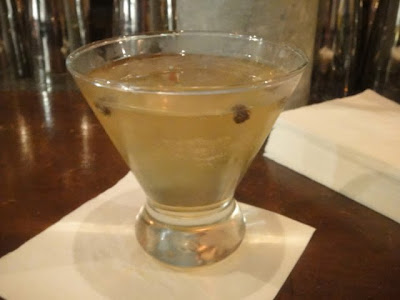 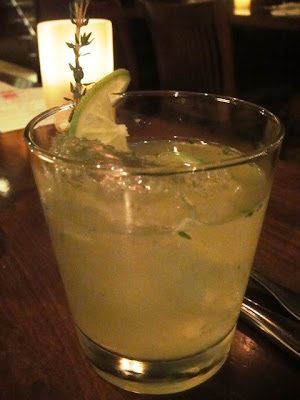 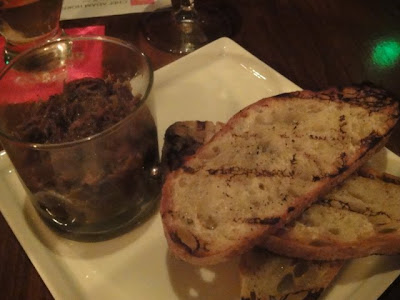 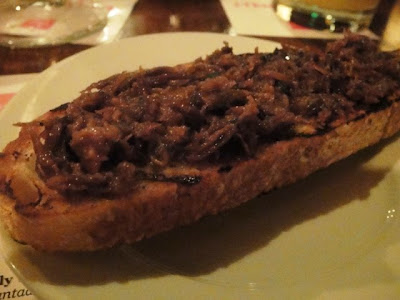 This was sort of a rillette but confit and tender, almost like pulled pork. The meat seemed like it had been stewed for hours and was juicy with a flavorful sauce. It was served with crusty grilled ciabatta. 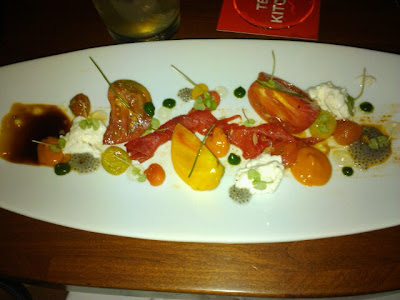 Heirloom tomato, buffalo and it’s cheese
I wasn't expecting such vibrant colors, somehow I was expecting the somber dark colors of a classic American restaurant. I really enjoyed the tomato and cumin paste that was smeared on the plate. It had an intense flavor with a bit of smokiness. The buffalo carpaccio was delightful- so tender and melt in your mouth. The basil seed gastrique, stewed tomatoes and reduced balsamic sauces really added varied flavors to the mozzarella. 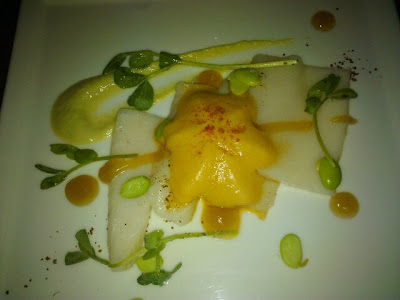 Escolar with sumac, edamame, horseradish, uni, flavors of pho and puffed rice
Escolar is also known as white tuna or butterfish. I've had it on several occasions but this version actually kind of tasted like butter. No kidding. You know that layer of fat that encases a piece of pate? Well, the escolar seemed very similar in texture to that. I only wished that the fish was served a little colder (I get weirded out by raw fish at room temperature). What I loved about this dish were the condiments. The intricate selection of horseradish foam, dollops of uni sauce and a mould of concentrated reduced pho really worked well with the blank canvas that was the fish. There was the right amount of cracked black pepper that gave a spice to the dish. 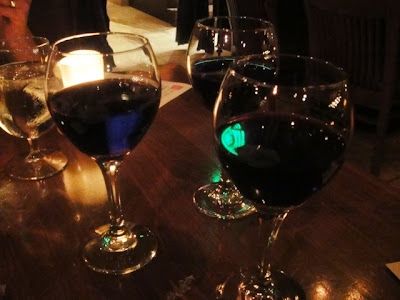 Our waiter was kind enough to give us a little tasting of both the Firesteed Pinot Noir and the Atteca Garnacha. We settled for the latter as it was smoother, less watery and less acidic. 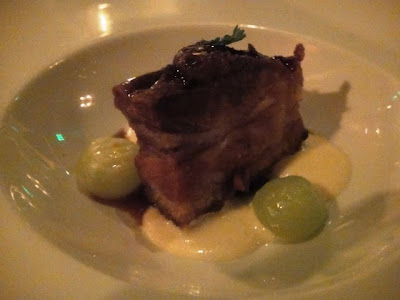 Pork belly with vadouvan, apple, yogurt and cucumber
The pork belly was braised for 6 hrs, then pressed for 24 hr, cut then fried. It was fatty in the center although not completely fork tender. It reminded me of char siew, Chinese pork belly. I really enjoyed the yogurt purée and the braising liquid which was reduced with vadouvan. I was excited to see the use of such spices, which really goes to show Horton's modern influences in this preparation. 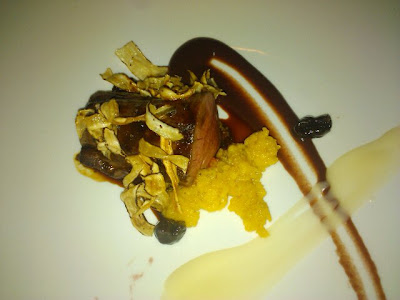 Elk with almond, bacon, brandied cherries and squash
The elk was perfectly cooked, tender and medium rare in the center. Once again, Horton's sauce work really excelled. On this plate was a duo of almond and bay leaf, and bacon with macerated cherry and brandy sauces. I also really enjoyed the pureed squash which was cooked with maple syrup and cooked almost like scrabble eggs. The fried salsify strips that sat atop the elk were crunchy and similar in taste to plantains. 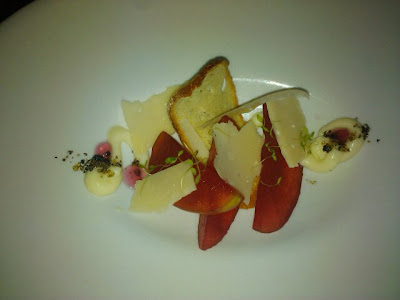 Parmigianno Nero with apple, hibiscus, white chocolate and olives
This was sort of a cheese and fruit plate. I usually shudder at cheese plates (especially when they offer up stinky cheeses) but thankfully the chosen cheese was Parmigianno, one of the three cheeses that I can actually eat. The chocolate and cheese surprisingly paired perfectly together. The white chocolate was infused with hibiscus, while the olive was caramelized, dried then reduced to powder form. In fact, it didn't even taste like olives (that's a good thing, for me). 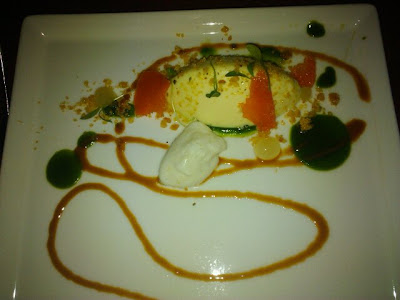 Dessert- “Thai green curry” with chicken, lemongrass, cilantro and lime
When I scoped out the menu online a few days ago, I was certain that this was a typo. Chicken for dessert? That'd be brave. And Horton is just that. I was blown away with this dish. The lemongrass custard and drops of coconut curry foam was intense in flavor. The chicken was in the form of fried crumbled chicken skin that was littered over the custard. This is way cooler than the bacon in dessert trend of last year. In the same vein of showcasing Southeast Asian flavors, he used Indonesian kecap manis, a thick sweet sauce, to accompany the dessert, and served it with dehydrated candied carrot, cilantro and reduced kaffir lime. I found it very smart and a great way to present such flavors, which are normally served in a savory dish, in a dessert.

The service was excellent from our very knowledgeable and enthusiastic waiter Aaron, to the front of the house and the mixologists who made dangerously good cocktails. The food was really exquisite. I loved that he played with Asian spices, and not with the usual soy sauce but with more exotic ingredients. I was thoroughly impressed with the menu, the bold flavors and the plating of the dishes. They were intricate with so many components, and we were shown things that we'd never seen before. Given that Horton's really not able (yet) to fully experiment with such flavors and techniques at Saddle Peak Lodge, it's impressive that he has been able to executed such unique dishes so successfully. And that's the beauty of Test Kitchen. It really allows chefs to experiment with concepts, and to see what works. It's a great platform to showcase talents that you normally would not get to experience firsthand. That is.. unless you decide to hire a car to take you to Calabasas for dinner. I just might have to do that..

bagnatic - yes! it was an excellent night. Still thinking about the chicken skin dessert. mm