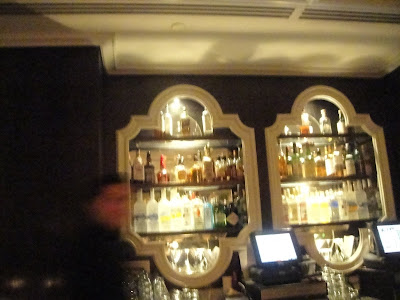 It's Thursday night and I was on the hunt for a good happy hour. Viceroy Hotel in Santa Monica recently announced a 5-9pm M-F Happy Hour with select food and drinks priced at $5-9 and on Thursdays, it runs from 5pm till closing. My kind of happy hour, I'm so there.

I've always liked the Viceroy. It's classy yet trendy. The restaurant Whist typically serves good food although there seemed to be some shuffling of chefs every couple years. The new head of the kitchen is Tony DiSalvo who has worked at three Michelin-starred Jean Georges and Gramercy Tavern in New York. So yes, expect to be wowed. Our bartender Reuben told us that although the menu doesn't seem to have changed much since the chef came on board two months ago, DiSalvo is in fact slowly introducing new plates to the menu each month. 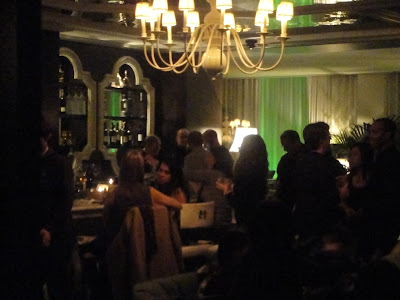 The patio is the coveted spot of the hotel but in the winter, it's all tarped up and the outside bar only opens on weekends. As such, we decided to sit in the inside bar area. The bar was pretty packed with post-work office employees who all had the same great idea. 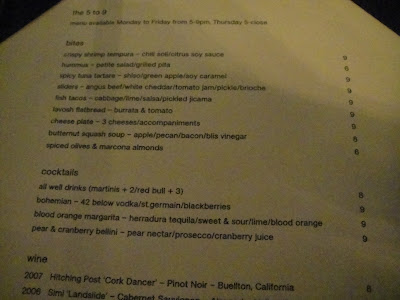 Yes, happy hour bites for $9 is considered a steal at this joint because the hotel is fairly upscale and their regular dinner menu is priced at high teens for appetizers and high $20s to $30s for entrees. We ordered a round of Piper Sonoma sparkly at $8 each. 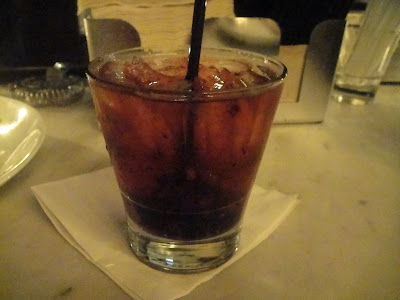 Later, I tried the Bohemian which includes blackberries, St Germain and an unintentional very heavy pour of Vodka. 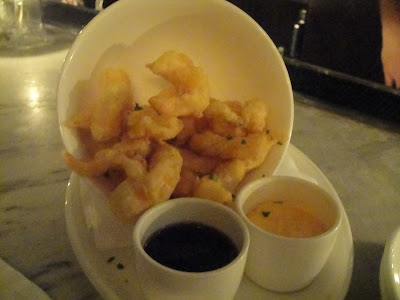 Tempura shrimp with side of chili aioli and citrus soy.
I really enjoyed this dish. The shrimp came out freshly fried and hot. The breading was perfectly airy and the shrimps were nice plump pieces. I also liked the addition of citrus in the soy dipping sauce. Spicy tuna tartare with shiso, green apple and soy caramel.
There was a good amount of fresh tuna on the plate. I thought that it needed some citrus but when I paired some tuna with the dark brown and green drizzle on the plate, the combination worked well . 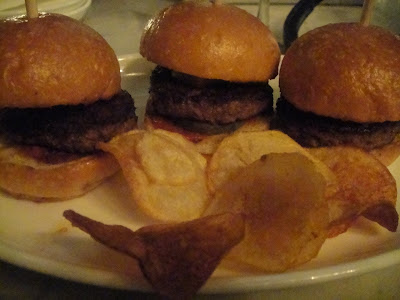 Trio of Beef Sliders
The ingredients of the sliders were good. The Angus beef patties were juicy, not greasy and not dry. The patties came with tomato jam, not ketchup. I liked the brioche bun. Even the potato chips were home made and tasted oily in a good way. I like when chefs go that extra mile instead of using generic condiments and sides. The slider was also portioned correctly. The patty fit perfectly under the bun, the slices of cheese were cut just the right size so that it was just slightly smaller in width than the patty. It just seemed that there was an attention to detail in the presentation. 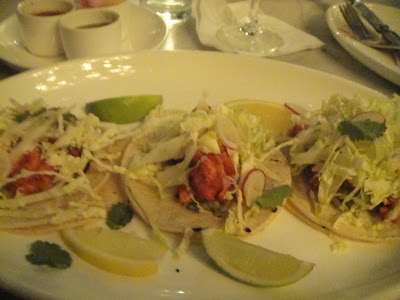 Fish tacos with cabbage
The fish was cooked perfectly and marinated in a red sauce; I liked that it was grilled and not fried which made for a healthy choice. The tortilla was warm and fresh. With a squirt of lime, each taco was a flavorful three bites. 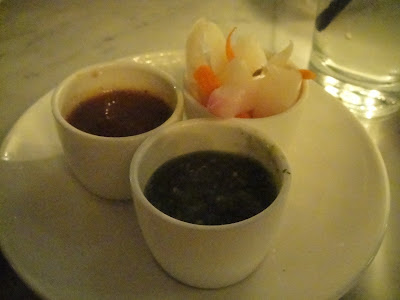 Condiments for the tacos: salsa and pickled jicama 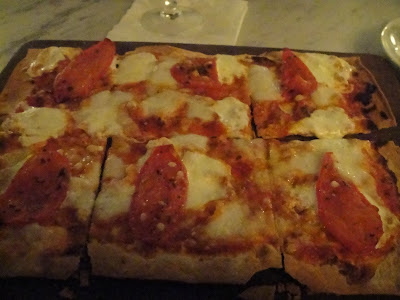 Flatbread with burrata and tomato
Pretty large portion. Flatbreads are so much better as bar food than pizzas because you won't fill up on too much dough. The flatbread was thin and crispy, just the way I like it. The tomatoes were actually not semi-raw but instead were stewed a little. I prefer this preparation of tomatoes and thought it really made the flatbread so much better than a regular margherita-style pizza.

To end the night, Reuben brought over freshly popped popcorn. In fact, we finished it in seconds so he brought by another batch. 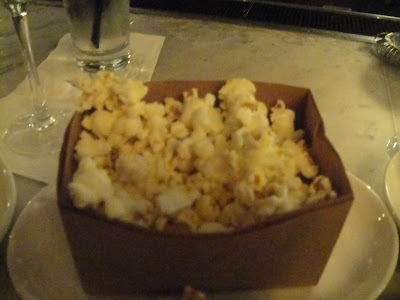 The popcorn had the right amount of salt and butter. What a nice surprise, and a good way to end the night.

The bill came up to $100 excluding tip for seven drinks and food (Reuben comped my cocktail because of the heavy pour - I wasn't complaining). Yes, that's four drinks each but in my defense, champagne flutes are tiny! I really enjoyed the evening. It's crucial to grab seats at the bar because you'll receive the best service. Reuben would even top off our sparkling wines. Yes, it's definitely an upscale happy hour at that price tag but that should be expected at a fancy joint. I thought the food tasted good and the ingredients were fresh. The happy hour food selection were items that I would order as appetizers at a restaurant, so it was good to see that it wasn't just french fries and nuts on the menu. Lastly, I can't stress how important it is to have a happy hour that ends late. I love the fact that we could order food in waves and not all at once at 6.58pm. As a result, I think I ended up staying longer and eating more than I normally would if I had been at a bar that had a happy hour that ended at 7pm. I do have to admit though, even at these discounted prices, I won't be here every week unless I'm planning on going broke. But I will pop by when I am looking for a fancier night at a bar.

Hits: service, shrimp tempura, sliders, happy hour all night (and until 9pm on other nights)
Misses: Still not a cheap HH
Rating: ***