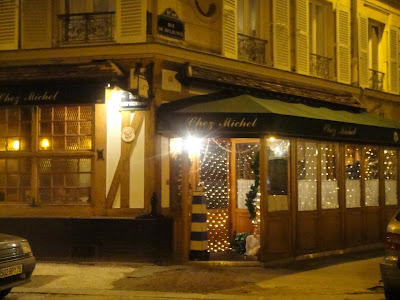 Chez Michel is located near the Gare du Nord, not a very pretty neighborhood but the restaurant itself is quaint and cozy. This is one of my sister's mother in law MTB's favorite place as the food never disappoints. That's the thing I've found with Paris dining: there are so many options out there that you really need to narrow it down a bit via recommendations. The chef Thierry Breton is known for his simple seafood dishes with influence from his hometown of Bretagne. 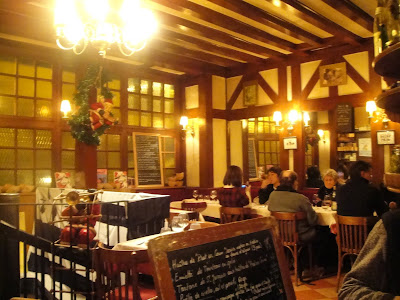 The restaurant has a small main dining area and an additional cellar area below which seems a bit more casual with no table cloths on the tables. It was full all night and reservations are almost necessary. 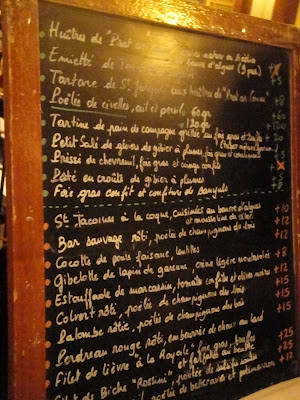 Dinner is a three course prix fixe with additional menus on the board for supplemental charge. It took a while for them to take our orders, but when the waiter came around, he rattled on so fast and seemed a bit impatient that in the haste, some of us ended up ordering the wrong items. Oh well... 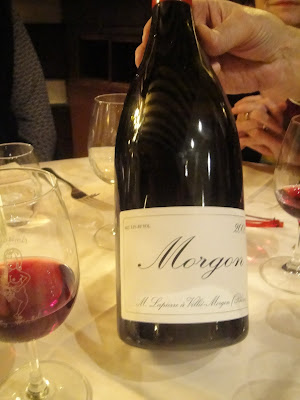 Magnum of wine for five of us. 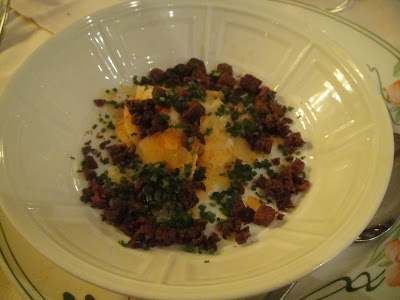 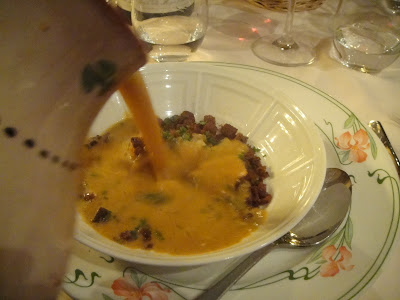 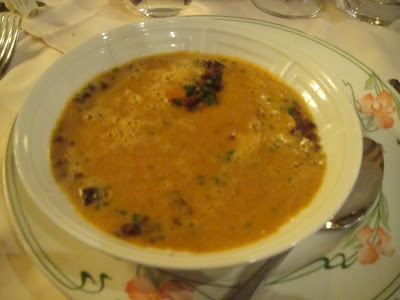 The broth was poured tableside and the pitcher of remaining broth was left on the table for second helpings. The dry ingredients included various fish and fried fish bits. I loved the fried fish bits as it was salty and added texture to the soup. The broth itself was flavorful with seafood essence. It wasn't a cream base but yet was rich. I thought this was the winner of the night. I'm glad I decided to try something different and ordered this instead of the terrine. 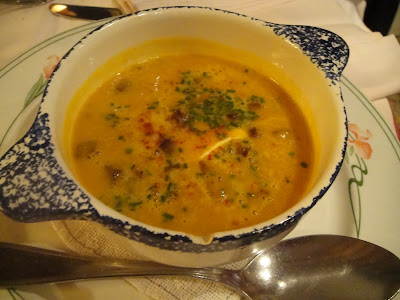 Crème de potiron/Pumkin cream with chestnuts and smoked eel
As with the fish soup, this was abundant with seafood flavor. As this was cream based, it was heavier than the fish soup, hence thankfully no pitcher of refills!

We also ordered Craquelins de Saint-Malo/salad with goat cheese. MTB raved about it. Apparently the quality of the cheese was superb and it was breaded and deep fried. 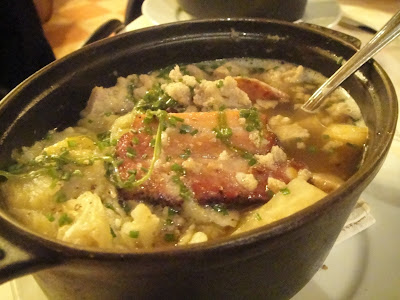 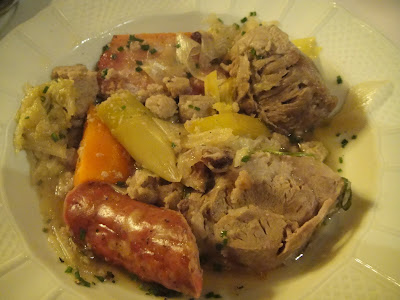 Kig ha farz du "Père Breton" (Pot-au-feu Breton)
Veal stew with pork, sausage, ham, leeks, buckwheat dumplings and vegetables. I liked the ham which had a piece of cartilage attached. The sausage had a little sweetness to it. The other meats however were alright. They just tasted like boiled meat which perhaps was lacking some seasoning. 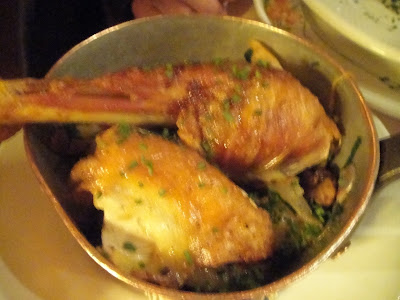 Chapon
Very rustic serving of chicken. The leg was huge like bam-bam style and was juicy and tender. This version was better than the one we had at Restaurant Julien. 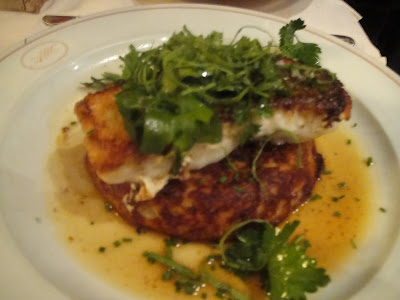 Cabillaud/Cod which is another one of their specialities.
IMO, the cod was a tad too salty, perhaps that's how the French like it. It was served with a potato and mushroom cake that was browned on both sides and tasted like hash browns. The potatoes had a sour tangy sauce to it. Although this is a popular dish at the restaurant, I didn't think it was anything special and would give it a skip. 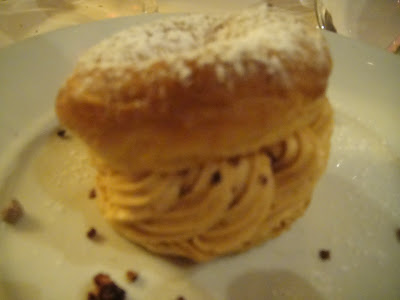 Paris Brest which is one of the restaurant's known dessert. The puff pastry with hazelnut cream was lovely. The airy, crispy pastry paired well with the smooth nutty cream. 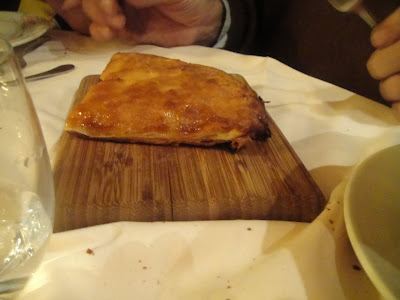 A fresh, buttery Apple Tart on a chopping board. 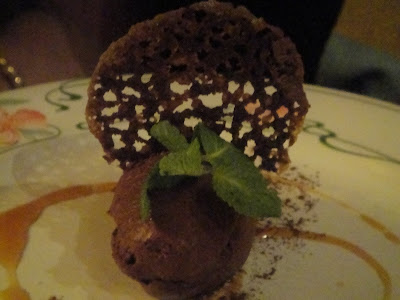 Quenelle au chocolate, a sort of ganache topped with a sprig of mint leaf. Rich and decadent. 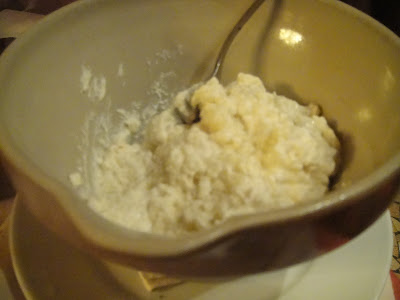 Riz au lait façon grand-mère/Rice pudding served with marmelade
This came as a huge serving in a bowl. Seemingly simple but addictive with a vanilla bean flavoring. Surprisingly everyone loved it and keep going for more.

I really enjoyed dinner at Chez Michel. It was a good, filling meal and the prices were good for the quality of food. I especially enjoyed the soup and the desserts. Service was mixed on various levels. It was a bit slow but rushed at other times. We waited a long time before ordering and also between the plat and dessert, however was rushed through ordering. It was also a mix of friendly and cold service depending on the server. Another issue was that "the credit card machine wasn't working" the waitress said unapologetically. At a place where the bill came up to about €250, I worried about the youngster party at the table nearby that was celebrating a birthday who I assumed would be hoping to pay for the tab with plastic. Thankfully my dad had cash, else what is one to do when the restaurant is located close to the middle of nowhere with no ATMs easily accessible.
Hits: fish soup; desserts, generous portions; reasonably priced
Misses: cod, erratic service, credit card machine
Rating: **** because the soupe de poisson is worth going back for