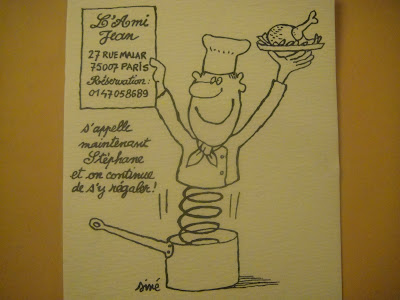 Paris is a gastronomical mecca which can be confusing to many foreigners who will likely have many questions. What's the difference between a brasserie and a bistro? What's a cassoulet? Are those really snails? Where can I get a great meal? Thankfully, most of your food related questions can be found (or if not found, asked and then answered) on Chowhound (CH). CH is the place I head to first before I dine at any restaurant in LA so that I can get the scoop on the popular dishes and the ones to avoid. So as a devoted Hound, naturally I headed over to the Paris site for recommendations. Thankfully the Paris CH board was English friendly and very informative. Apart from some three star joints that were raved about, Chez L'ami Jean popped up numerous times. Apparently the food is consistently good so we made a dinner reservation.

Chez L'ami Jean is located in the Invalides area on the Left Bank, with neighboring streets lined with patisseries and high end stores selling truffles (the fungi, not the chocolate). Unfortunately (or fortunately) it was a rainy night so we made a beeline for the restaurant without taking time to peruse the stores.

The restaurant is tiny and rather nondescript. The menu focuses on Basque cuisine with a number of fish and game options. 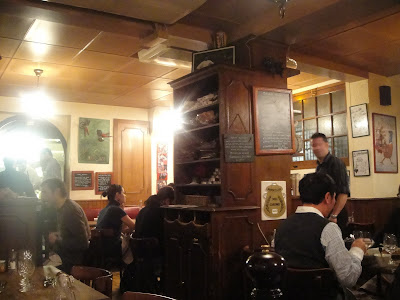 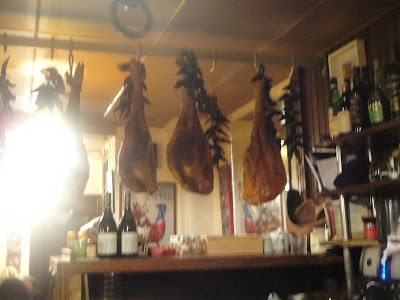 Like most other Parisian restaurants, they offered a three course prix fixe menu for 35€ and have many other items on the ala carte menu. Although they do not have an English menu, the waiters will translate it for you, albeit with a little haste. 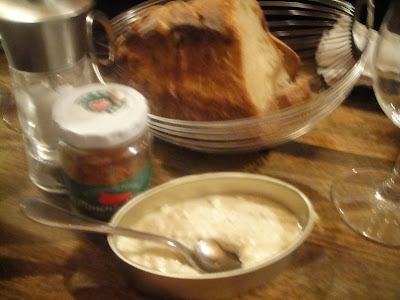 Bread was served with a puree of white cheese mixed with cumin that tasted like hummus. Wine was very reasonably priced unlike at Paul Bert the night before. 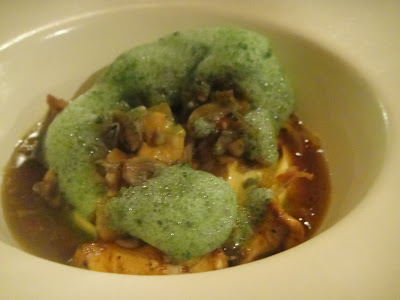 Cream of egg with pied de mouton
No... don't get TOO excited, it's not feet of some animal but wild mushrooms. The cream was rich and sprinkled with some sort of fried lardons that gave the creamy concoction a nice crunch. As with most of their entrees, the dish was topped with foam. This is the first time I've seen foam in Paris and I'm glad they don't just do it at fancy Franco-Californian restaurants in LA. This was my favorite starter of the night because I loved the creaminess and the earthiness of the mushrooms together. 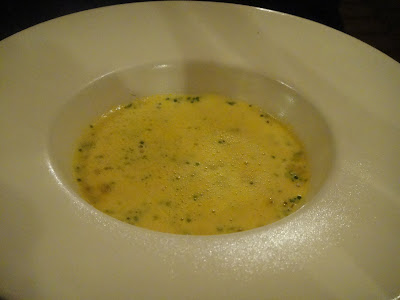 Pumpkin soup
The soup was poured from a pitcher that was left on the table for refills. I liked the soup because it was rather thin and viscous and not too heavy or creamy. 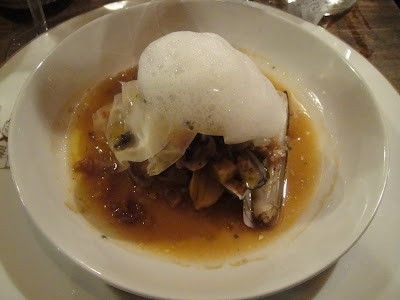 Razor clams with mushrooms
There was a nice serving of shellfish and the broth was light. Lovely presentation with ribbons of shaved radish of some sort. 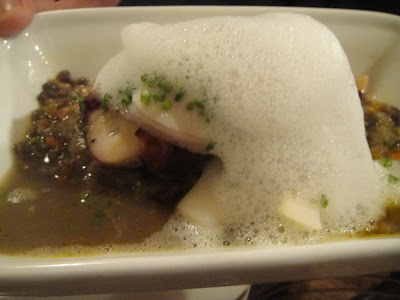 Calamari with lentils
The calamari was tender and the lentils were cooked perfectly. We read somewhere that the calamari dishes at L'ami Jean were highly recommended and after tasting this dish, we concur. The prix fixe plat options included two fish, steak, pork and a veal kidney dish. 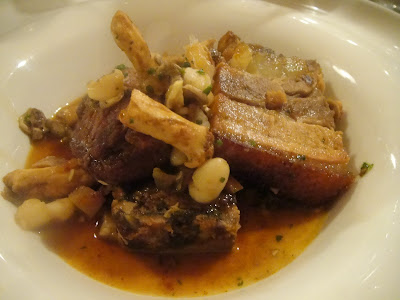 Cocotte de porcelet, joue, mignon et autres
This was the ultimate pork dish that included the belly, cheek and terrine served with cannelloni beans and mushrooms. I liked how you were served three different parts of the pig. The pork cheek as expected was tender and melt in your mouth. The belly was fatty and scrumptious. And the terrine, I thought, was a nice addition; It tasted like Asian salted pork (the kind served with braised cabbage) and was definitely up there on the salt meter but very flavorful. The beans were cooked till they were soft and easily mashed. I also loved the mushrooms which always goes well with a heavy meat dish. Everything in this dish was delicious and was meant to be on the plate. 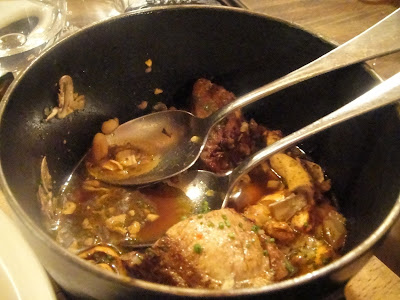 The dish was served in a cast iron pot with more than another serving. 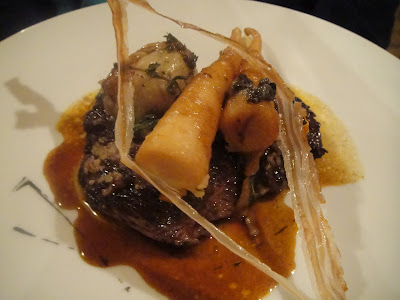 Bavette de race de choix, cuisiner aux anchois, jus de viande
Steak cooked with anchovies and topped with marrow. We haven't had a bad piece of steak on this trip; they have always been perfectly cooked. The marrow was tastier than the night before at Paul Bert and was the perfect spread on a piece of bread. 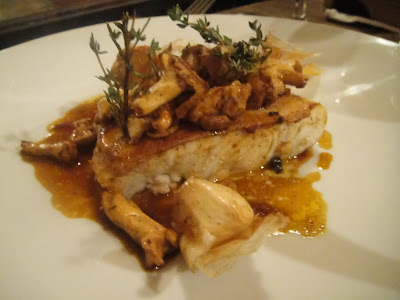 Flétan en épaisseur, pied de mouton sauter au lard
Flétan is a halibut and is a great selection if you aren't feeling the heavy wintery meat dishes. The fish wasn't dry and although was light, the mushrooms added some heaviness to the dish. 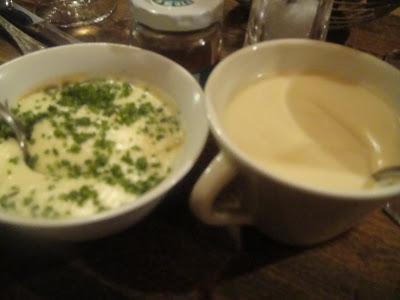 Two sides were brought over; mash potatoes and puree of celery. I liked the celery puree better as it was smoother and had a sweetness to it. 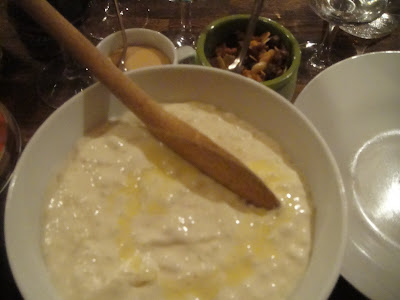 Le riz au lait; Rice pudding with caramel and salted butter, and salted nuts
This is their well known dessert and was served in a large mixing bowl big enough for the whole table. The rice was al dente and mixed in with milky vanilla bean mixture. The rice pudding was also served with a side of caramel butter sauce and some mixed nuts which really gave the dessert an extra layer of flavor. The saltiness of the nuts was a nice contrast to the mild sweetness of the pudding. Honestly, this rice pudding was so addictive that I kept scooping "my last serving" onto my plate. 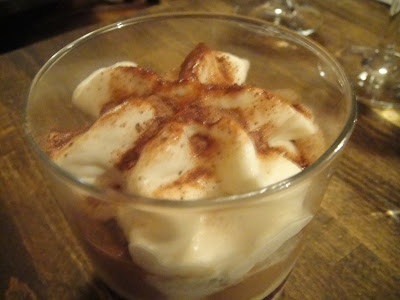 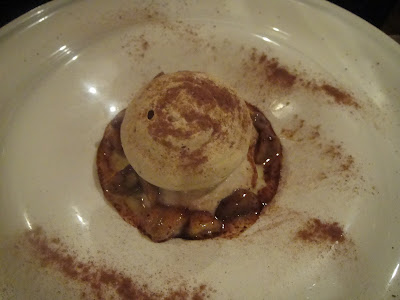 Mont blanc de marron gourmand
Chestnut ice cream topped with macaron. Chestnut ice cream seems to be the seasonal choice during the holidays. I liked how the dessert was plated but I think my mom was disappointed with just one small scoop of ice cream instead of a "mont blanc". 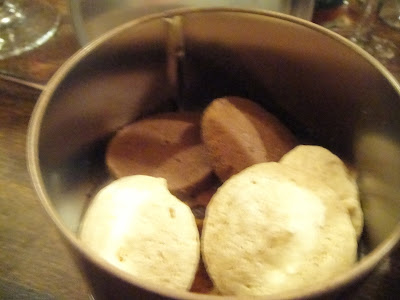 If that huge pot of rice pudding wasn't enough, they also brought over cookies and macarons in a tin can. You could tell there was a lot of butter in this (which is a good thing!) as the cookies were crumbly and rich. They weren't overly sweet either so you knew that it was made inhouse or purchased from a good patisserie.

We walked away impressed and very pleased. I was especially relieved because after dining at a handful of place in Paris prior to this night, we still hadn't experienced that amazing meal. Yes, we've had good meals, but nothing that I would call exceptional. The food at Chez L'ami Jean was spot on, rustic yet delicate and the presentation was lovely. The pork dish won over every other main course I've had this whole trip. Service was brisk but friendly. Although we were out in less than two hours (newborn at home awaits), we did see other tables lingering on for much longer. And to think we would have missed out on this special place had I not done some online research. Oh Paris Hounds, you did good. Hopefully I can return the favor if you are looking for dining recommendations in LA.

that sounds FANTASTIC! The French are ok w/ taking food pix now as well I see. I felt like a freak a few years back when we visited (mid 2000s).

Hi SinoSoul- Yes I was surprised that I wasn't given the evil eye for taking photos. In fact at some restaurants, the waiters would pour soup in slowmo so that I could capture it on camera. Times sure have changed..

Hi
I am 41 years old and parisian for about the same time
We recently bought with my wife an elegant one bedroom with really a nice view on the Dome des Invalides in the heart of the 7th arrondissement of Paris very close from l'Ami Jean restaurant.
We rent it for tourists or sometimes businessmen when they come to Paris.
You can have a look on our (homemade) website
Bye bye et peut-être à bientôt à Paris
We look forward to welcoming you in Paris
Philippe & Sabine
Paris, France