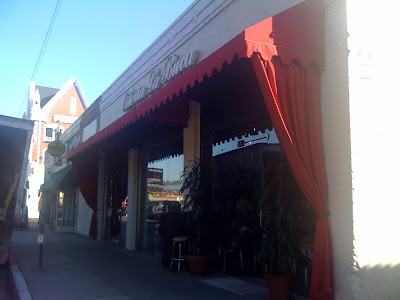 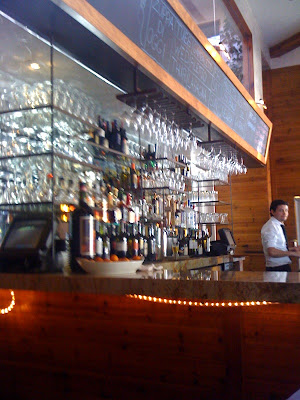 Osteria La Buca is a neighborhood Italian restaurant in Hollywood, opened by Filippo Cortivo and garnered reviews for his "mama's" rustic Italian cooking. There's been a recent change in ownership. Cortivo and mama are no longer with the restaurant, and instead Alberto Lazzarino of now closed Melograno is running the kitchen. I've dined here once before but that was over a year ago, so I was looking forward to lunch and to determine for myself if the "new" restaurant was any good. 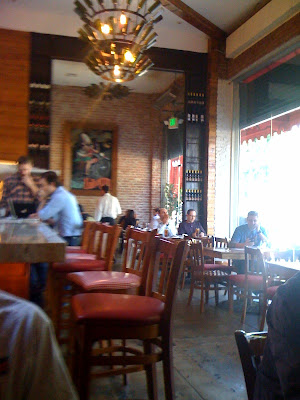 The place is quaint with two stories: there's seating on the bottom floor where the bar is situated and a sky room/lofted seating. The waitstaff are Italian so that's a good sign. 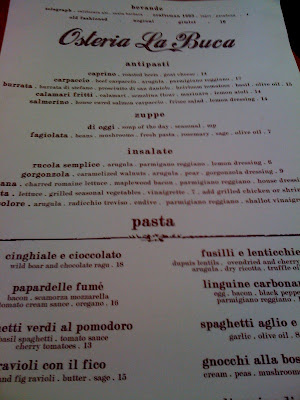 The menu looks smaller than before with fewer pastas and no paninis. Well, let's hope they kept the good recipes. 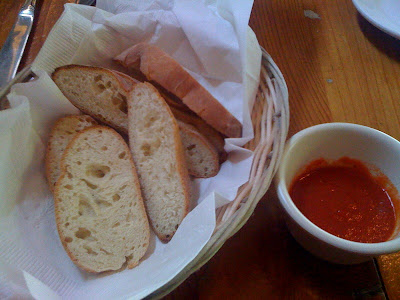 The bread served were thin measly slices and came with marinara sauce which was actually pretty good and unexpectedly spicy. We didn't have to wait long before our entrees were served. 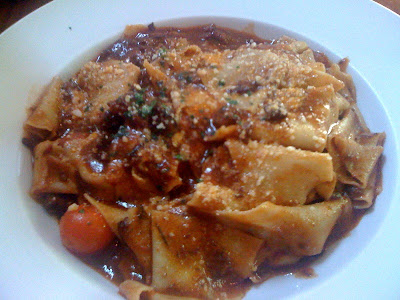 Cinghiale e cioccolato with wild boar and chocolate ragu
I had been eyeing this dish when I saw it on their online menu. I can never say no to the pappadelle and game meat combo. The homemade pasta was lovely; big, flat and fresh. I was a bit disappointed with the boar though. I thought it would be shredded slices that would meld in with the pasta and sauce but instead they were little chunks that tasted like regular ground beef. There was also lots of rosemary springs in the sauce and the taste was overwhelming. It was so off putting that I just ate the pasta and avoided the sauce. Such a pity because I was looking forward to a comforting pasta dish. 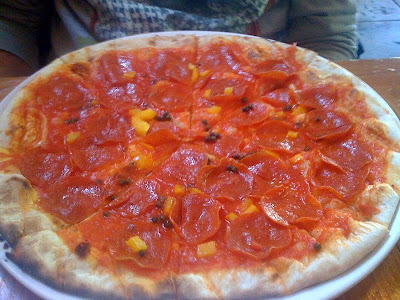 Inferno pizza with spicy tomato sauce, pepperoni, bell peppers and capers
The pizza was huge and you would think it impossible to finish but it was surprisingly rather light because it was very thin crusted. The pizza was not greasy despite the amount of pepperoni on the pizza. The sauce added a spicy punch to the pizza.

Overall, I thought Osteria La Buca was alright. I've had better boar pasta dishes and I don't know if it warrants the four out of five stars on Yelp. I wonder how different the food is under the new management. I had only been there one other time and I had ordered a sandwich so I am not in a position to make a fair comparison. But I do know I was disappointed with my dish this time. The boar pasta sounded good on paper, but somehow wasn't executed well.

Service was fast which is great for a power lunch. Everyone was friendly and welcoming. The bartender and waiters also checked in on multiple occasions, asking how the food was. Perhaps they were concerned when I was picking out sprigs or that I didn't lick off all the pasta sauce on my plate. I told him that the food was good but mentioned, perhaps too softly, that there was too much rosemary. A decent lunch but I won't be running back soon. There's so much more to conquer in Hollywood.
Hits: fresh pasta, pizza
Misses: pasta sauce
Rating: **
Osteria La Buca
5210 Melrose Ave.,
Los Angeles CA 90038
(323) 462-1900
http://www.osterialabuca.com/

I am under the impression that you have only been to Osteria La Buca once prior to your recent visit? I am a regular there so I feel that I must correct you as I am sure you know then that mis- information can be very damaging! Mamma and Filippo were in complete control of the menu but because the partners felt the menu was straying from its roots. They hired a Northern Italian chef Alberto Lazzarino who's last restaurant got him rated with Michelin,Zagat, LA Times to name a few. As Mamma had never been reviewed formally other than Yelpers. There is very little known about this hole in the wall other than local praise. I am sincerely excited to have this chef in the neighborhood to excite our palates in a casual atmosphere. I noticed that the prices were lower with this new menu too!

Thanks for your clarification. You are right, there is little info out there about this joint. I've just excluded my previous note all together as information that I found elsewhere seem to be different. I hope you've had a chance to try the food under the new chef and please let us know what you think since you'd be able to point out differences, if any. I still think my pasta was disappointing but it could have been a one off.

Very little info? Please. It's all over chowhound. It's been blogged to death. etc. It might've been a whole in the wall wayyyy back then, but after last year's expansion, it's totally not worth eating.

Hi SinoSoul,
What I meant was that there wasn't much information about the "breakup" of the ownership apart from what Eater mentioned but a qualified observer had a slightly different POV. In any case, it'd be interesting to see if the food will be siginificantly different (either better or worse!). It's too bad I never got to try them back in they heyday.

I ate here for the first and only time this past Saturday and *really* enjoyed the entire experience. We sat upstairs near the fireplace which provided great ambience. Excellent service, great fresh pasta, an excellent goat cheese and pesto pizza, and a delicious panna cotta. I can't wait to return!

Only something so brilliant can stir up such controversy.
I came upon the original square box of La Buca because it was 3 blocks to my house. Where in LA can you walk to a cosy, tasty restaurant that feels like your very own? I doubt if there is a MAMA, though I've not been to the Osteria La Buca, just its original beginnings, run by Italian men with photos of one of the guys (owner?) pictured with Sophia Loren. I've never had a fresher Calamari Salad. Everything was pure Italian, like in Italy; fresh simple, and you can taste each ingredient. I was scared when the quaint La Buca started renovations to become Osteria La Buca and haven't been back since. I'm one to eat like a local, and La Buca was a unique transport from LA to Italy, right down to the Italian Waiters who left you alone to your table all night long if you so wished. I'm glad the bad reviews are as many as the good ones, inspires me to get over my love of what was lost to hope for authenticity as Osteria La Buca struggles to stay true to how their fame spread, the Authentic Food!

I agree the new ownership doesn't do justice to the food as did Mamma. I had the fume' and it was basically arrabiata sauce with some cream. What happened to that delicious melt-in-your-mouth creamy wonder from before? The pannacotta was still ok, at least.

The food was noticeably different after having gone there for years. Before, it tasted like it was made especially for you. Now, it's a better than mediocre. It's still hard to beat as far as real Italian food in LA.

No one waiter is italian only mexican or austrian and also Lazzarino is not there anymore so .......