A Mammoth Primer and dinner at Nevados

Winter season = snowboarding = no weekend restaurant dining in LA.
I'll typically MIA most weekends in the winter because I like to spend it up in Mammoth. Mammoth Mountain is a ski resort located in the Sierras, about 4.5 hours drive from LA. It's peak is over 11,000 feet and when the whole mountain is open, there are about 28 lifts and 150 trails.
After a long day on the mountain (both snowboarding and hanging out at the resort bar), there are days when you'll want to stay in and cook pasta at the condo and other times, it's fun to dine out. Since it was our first trip of the season, we decided to eat out. I've been going to Mammoth for about a decade and have seen it expand from a small, local town to a large, upscale (with a Westin and Ritz Carlton in the Village) resort. With the real estate expansion comes increase in dining establishments. Apart from the town pizzeria and brewing company, Mammoth Village now boasts wine bars and many fine dining options.
Nevados is a local favorite restaurant that serves contemporary American cuisine and is known for its game dishes. They offer a three course prix fixe menu for $48 which is a rather good deal since appetizers are priced in the teens and many entrees are in the 30s. 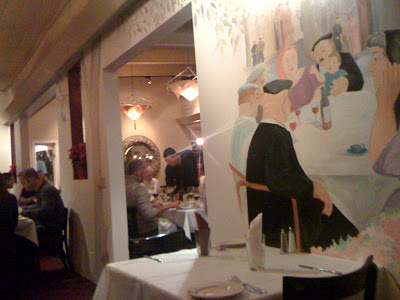 Usually reservations on a weekend book up quickly but because it was still early in the season, we were able to secure 7.30pm Saturday reservations by calling a couple hours earlier. When we arrived, more than half of the tables in the restaurant were filled and through the course of dinner, there was no table left empty. They have a bar area and dining room with mural covered walls. It got a bit drafty in the dining room because the restaurant is lined with many windows and it was extremely windy outside. Wish they had turned up the heater because it was a bit unbearable. 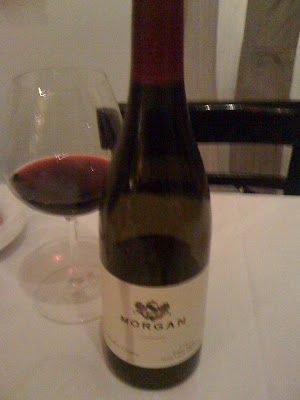 Since we knew we were going to order meats for our entrees, we started with the Morgan 2007 Pinot noir. 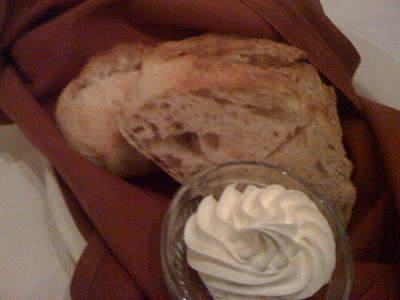 A basket of warm bread with a choice of rustic and sourdough and served with whipped butter. It was just what we needed to keep warm. Appetizers came out shortly and boy were they huge portions. 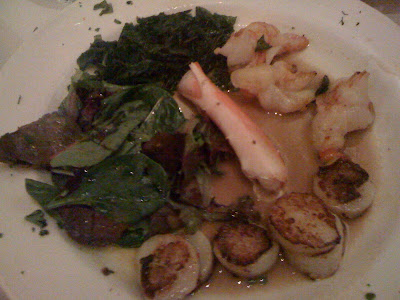 Trio of shellfish of tiger shrimp, sea scallops and crab merus with ginger soy dressing
The dish smelt great when it was served. I liked the scallops and shrimp but was surprised that the crab leg was not cracked. It took some finesse to pull the meat out of the shell. The shellfish was cooked well although I felt that there was too much dressing on the plate; the excess dressing made the dish look sloppy and the arugula was soaked in sauce. I did like the fried spinach which reminded me of a garnish in Chinese dishes. 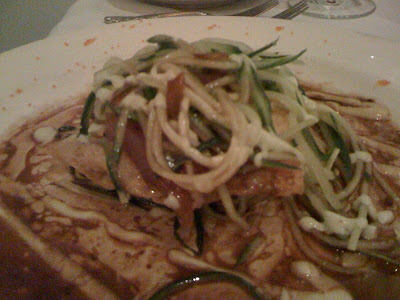 Albacore tuna sashimi and tartare, layered with won ton, avocado, tobiko caviar and cucumber with wasabi aioli
This came highly recommended so we ordered two of these. Again, the portion was huge. In most restaurants in LA, you would only get a couple minced pieces of fish in your tartare. But once again, the seafood was doused in dressing which was unnecessary because the fish was actually fresh and of good quality, and really didn't need to be overpowered with sauce. Otherwise, it was a good starter. 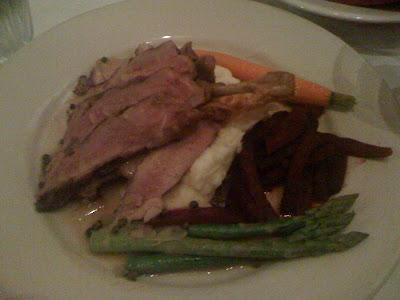 Grilled duck breast and confit of duck leg
Another dish that sounded so good that we ordered two. There was a generous serving of the duck breast however I thought the confit was better as it was tender, flavorful, fatty and topped with a crispy skin. Although the duck breast was pink in the middle, it wasn't as buttery as I had hoped. In fact, I think it would have been better a bit more rare. The duck was served with a peppercorn sauce which was rather bland with no spice at all. The mashed potatoes were good but the asparagus was not seasoned. The portion was so huge that I barely touched the potatoes even though I liked them, and I had a couple duck breast slices left on the plate. 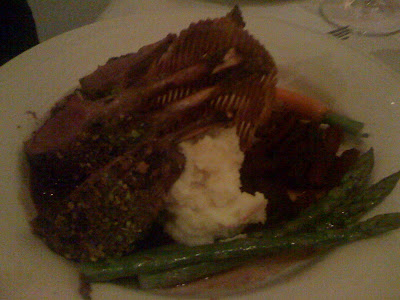 Pistachio crusted New Zealand lamb chop
The lamb was cooked medium rare and much more tender than the grilled duck breast. I liked the crunch from the pistachio crust. The two entrees were served with the same sides of mash, asparagus and beets. 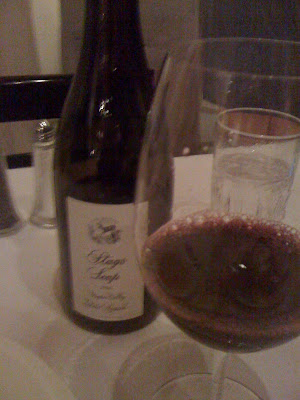 We also ordered another bottle of red, the Stags Leap 2005 Petit syrah. 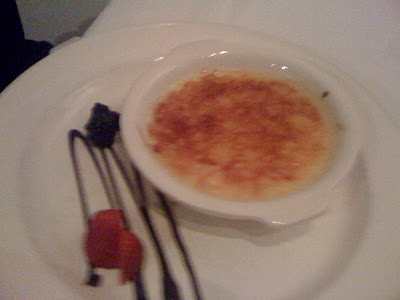 Frangelico creme brulee
This sounded good but you could not taste the frangelico. Honestly, I was wondering if they even included it in the creme brulee. The custard was also runny and undercooked. I always clean up every last bite of a creme brulee but we did not finish over half of this dessert. It really is a pity because a couple more minutes in the oven and a couple drops of frangelico (as promised) would have made my night. 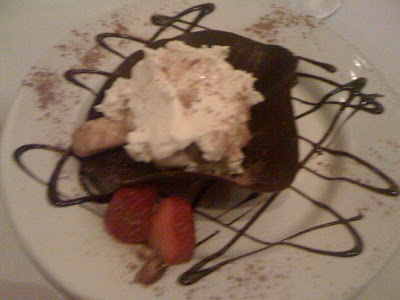 Chocolate tiramisu with espresso lady finger and mascarpone
This was my favorite of the three desserts. I thought it was interesting as it was a deconstructed version of the tiramisu. The layers of mascarpone cheese and lady fingers were served on a chocolate cup which was not what I had expected. The only criticism we had was that the lady fingers were not soaked in anything (either amaretto, coffee or brandy) so they were hard and crunchy instead of soft and moist. As such, the tiramisu was missing that distinct liqueur flavor. 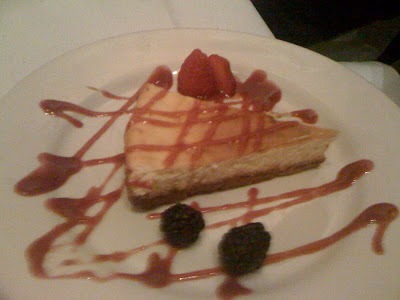 Passionfruit and ginger cheesecake
Once again, ingredients seemed to be missing from the desserts. We could barely taste the passionfruit and ginger. I love cheesecakes and this still tasted fine to me although it was a little bit overcooked and dry.
Overall, I thought that it was a decent prix fixe at $300 including tax and tip and two bottles of wine for the three of us. This was definitely a very filling meal for the price tag, and perfect for skiers and riders that had worked hard on the mountain. There were some good points (the starters, the duck confit and lamb) but some missteps: it seemed like in general, they messed up on the sauces by either drowning the food with sauce or serving sauce that was bland. Desserts were a bit disappointing due to "missing" ingredients and either over or under cooking. All in all though, it's not bad for mountain dining but didn't really compare to some of the "fine dining" places in LA. But for that price, I ain't complaining! Nevados also has a pretty lively bar scene. Jager is the drink of choice on the mountains and there were definitely many shots being had at the bar. When we left close to 10pm, the bar area was packed and a little rowdy.


Mammoth is a great getaway especially if you like snow. It was an excellent weekend with about 4.5 feet of freshies. 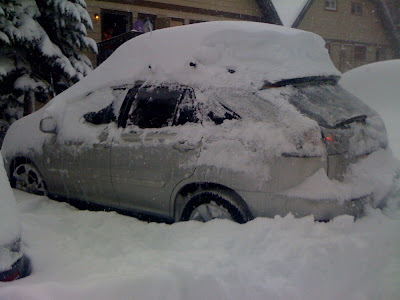 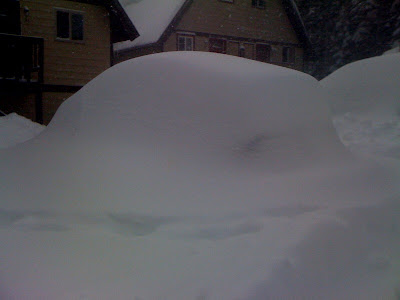 This was my friends' car after not moving it for 2 days.

Boy am I glad to be back in LA where temperature isn't as low as 16 degrees and winds aren't as high as 75mph. I love Mammoth but my arms are sore from shovelling snow. Until next weekend then.