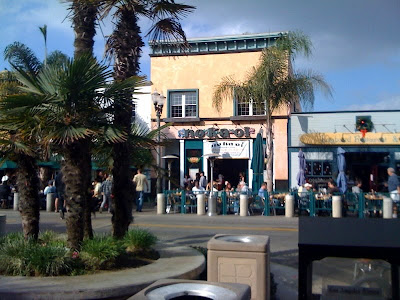 I've never hung out around Main Street in Huntington Beach but now that I have, I've decided that it's my kind of town. Casual dress code, located by the beach, lots of dining and drinking establishments, outdoor seating on the sidewalk for the perfect summer day and surf shops on every corner. The Main Street district is quaint. It reminds me of a cleaner and nicer version of Hermosa Beach, albeit more family oriented. Seems like it would be a fun place in the evenings as well. There are so many dining options from your regular beach town staple Sharkeez to breakfast joints and pubs. 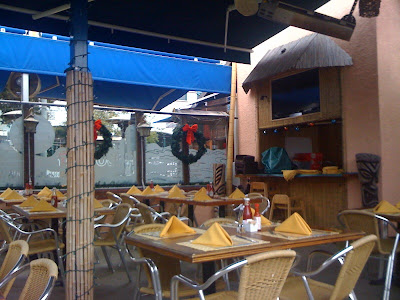 No Ka Oi, which means "the best" in Hawaiian, is located right beside the popular Sugar Shack that had a line of people waiting to be seated. We opted for something different: Hawaiian over the line. The restaurant has sidewalk seating up front but with a 15 minute wait so we decided to sit at the back patio. It was about 9am so the back patio was empty. 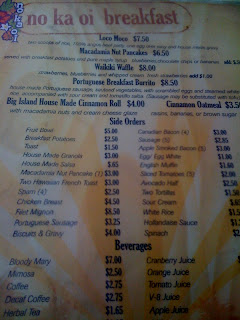 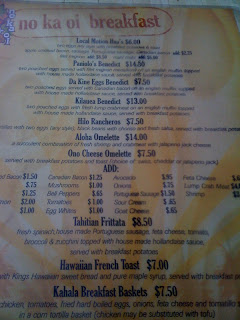 The menu includes some traditional Hawaiian dishes like loco moco (which I've never tried but am tempted to try Animal's decadent version) and Hawaiian spin on regular American breakfast items. They have three types of eggs benedict including one with filet mignon medallions. Tempting, but if we are at a Hawaiian joint, I want something representative of the cuisine. 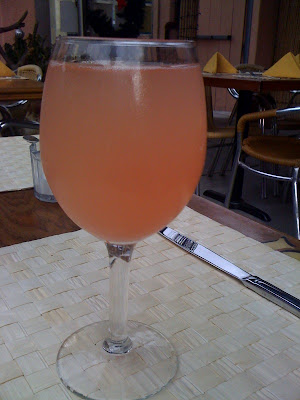 Mimosa for $2.50? That's cheaper than coffee at $2.75.
You can order a double which comes in a wine glass as opposed to a flute. There are a couple juice options like the traditional OJ, pineapple, guava and mango. I decided to try the guava. I love the sweet flavor and fragrance of guava. I thought it might overpower the champagne but it was balanced well. 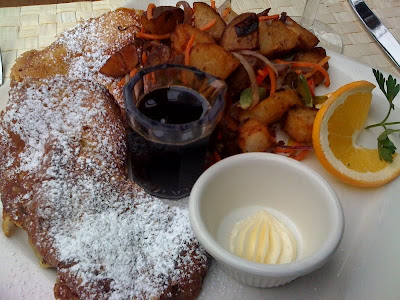 Hawaiian French toast made with King's Hawaiian sweet bread with pure maple syrup and potatoes
I'm a sucker for french toast. It's really hard for me to ignore it if it's on the menu. Thankfully this was a Hawaiian spin so I felt justified in ordering. I love the subtle sweetness of the King's Hawaiian sweet bread. The bread was fluffy and nicely coated with egg and topped with powdered sugar. I also really liked the maple syrup. It had that non processed sweet flavor. I know this is a casual joint but I thought they plated the dish well. The powdered sugar was a nice addition, and I liked the julienned carrots and onions in the breakfast potatoes. 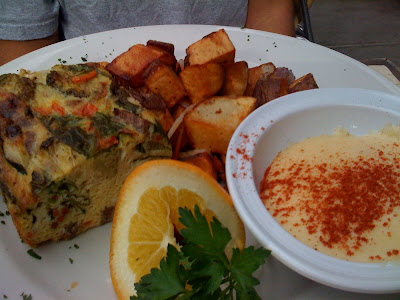 Tahitian Frittata with fresh spinach, Portuguese sausage, feta cheese, tomatoes, broccoli and zucchini with hollandaise sauce and potatoes
Sounds interesting and all the components were good, but it was a bit dry. Perhaps an omelet with the same ingredients would have been more tasty. The hollandaise sauce was really thick and rich; thank goodness we asked for it on the side as it would have been too much if it was smothered all over the fritatta. 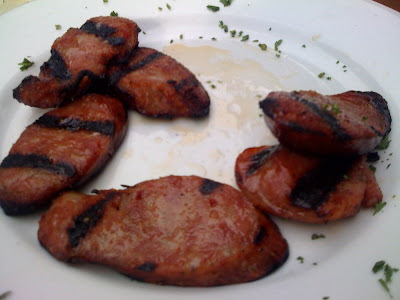 I decided to order a side of Portuguese sausage to see what it tasted like. It had a little sweetness and tasted like a cross between Chinese sausage and chorizo. I liked it because it was grilled, was flavorful and wasn't as greasy as pan-fried chorizo.

It's so easy to fall back on the same breakfast routine of sausage and eggs so it was fun to try something different. I enjoyed my french toast but the frittata was a tad bit dry. But overall, it hit the spot. I like the location too; Main Street was getting busier when we left. After breakfast, we walked around, checked out surfboards (sigh, anyone still needs to get me a xmas present?), bought myself a much cheaper purchase instead (my regular street ware i.e. the hoodie) and just enjoyed the brisk Cali breeze while the rest of the country is stuck in snowstorms.

I have a breakfast place for you...but it's on the eastside. Best...french...toast...ever. Call me.