And I want, and I need, and I lust, Animaaal 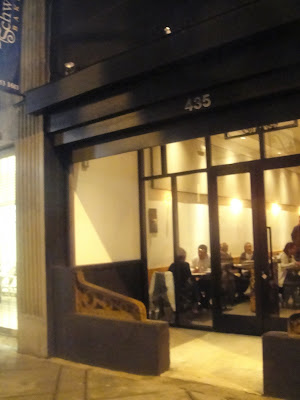 Def Leppard summed it up correctly. That's how meat makes me feel. Raw, Craving, Ravenous, Hunger. I'm the type of gal that will always order ribs, pork belly, foie over a salad. Anytime. So naturally, Animal Restaurant is my kind of place. It was conceived by Jon Shook and Vinny Dotolo from Food Network's 2 Dudes Catering. Although I am an avid Food Network viewer, somehow I missed this short lived series. I've been to Animal before but my two dining gal pals hadn't, so we decided to go in search of some meat. I remember ordering and liking the hominy and kimchee pork belly. I had wanted to try the loco moco but there were only two of us then so I refrained. This time, a decadent loco moco between three people sounded very doable. 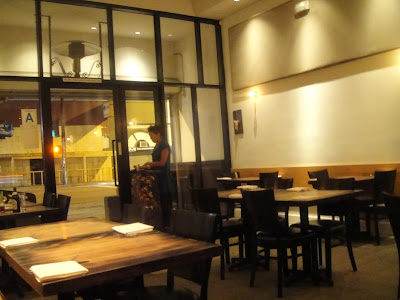 Animal is located on Fairfax in West Hollywood. The place is pretty nondescript and surrounded by vintage clothing stores, Canter's Deli and Jewish shops. There's no signage outside but they do have valet. It's a pretty small space with stark white walls and minimalistic decor. One complaint that I had was that it got a bit drafty whenever anyone opened the front door. I suppose it's never really an issue considering that it never gets TOO cold in LA, however it was a a rainy and wet anomaly last night. Even though they didn't play any Def Leppard songs, they did play some rocking tunes including Band of Horses, The Dandy Warhols, Doves and Coldplay. IMHO, that really makes the ambiance. 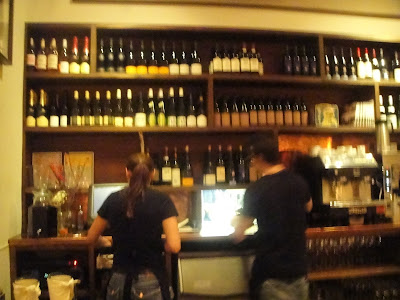 They have a small bar area but sigh.. no fun cocktails. 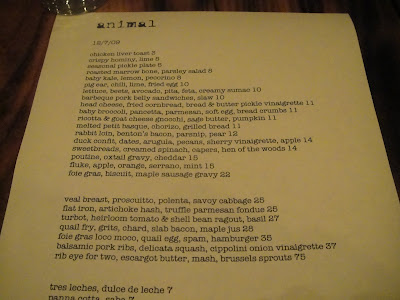 The menu is printed and varies daily with no modifications and substitutions. They offer a lot of heavy and rich dishes such as duck confit, steak, poutine (french fries smothered with oxtail gravy and cheese) and pork ribs among others. They have some seafood and vegetable dishes but it's hard to order that when you're faced with so many carnivorous options. Our waiter recommended that we order family style so that we could sample a variety of dishes. 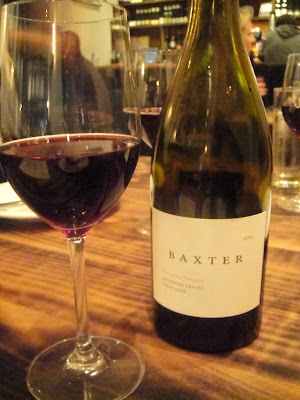 We started with glasses of Prosecco then ordered the bottle of Pinor Noir (Baxter from Anderson Valley); a light bodied red that would pair well with all the meat dishes that we had ordered. 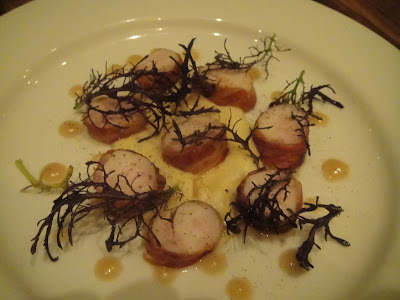 Rabbit loin, wrapped with Benton's bacon, parsnip, pear and mustard leaf on the top
The loin looked like a sausage and was tender and cooked perfectly. We were all surprised by the texture; it felt like the pheasant sausage that I had at 5th Amendment Alehouse: mild and very lean. At first we thought the meat needed a bit more seasoning but when eating it with the bitter mustard leaf and sweet pear sauce, it was the perfect bite. 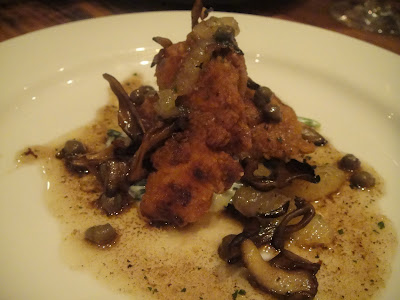 Sweetbreads with capers, creamed spinach and hen of the woods
The sweetbreads were amazing. I've had many preparations of sweetbreads before but I really enjoyed this because it was perfectly breaded. Some sweetbreads are a bit too soft and mushy. The strong taste of the thymus gland cut by the citrus from the Myer lemon sections and the tartness from the capers really worked. I also loved the earthiness of the mushrooms. A very complete and delicious dish. 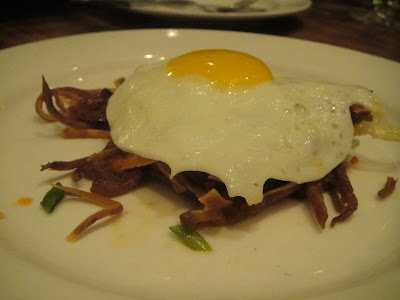 Pigs ears with chili, lime and a fried egg
You could instantly smell the spice when the plate was set down. I broke the yolk and it oozed all over the crispy pigs ear. The pigs ears were crunchy but a tad too greasy. We felt that the pigs ear lost its integrity in the preparation; they just tasted like deep fried thin strips and you really couldn't tell that they were pigs ear. The bar is set high for pigs ear after I tasted the glorious dish at Church and State, perhaps one of the best meals I had in 2009. Now THAT you can tell, was pigs ear. The pigs ear was kept intact (and not cut into strips), deep fried and the cartilage was rendered down till a point of softness and creaminess. It's not to say Animal's version didn't taste good. The flavors were there but like I said, my standard was a bit too high. 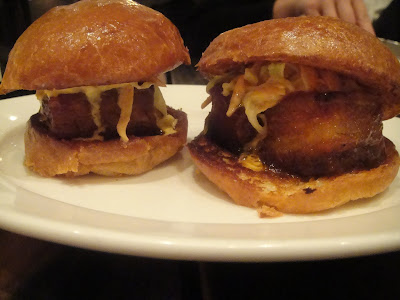 Pork Belly Sliders
This was friggin awesome. I've recently have many variations of sliders (BBQ pulled pork, burger patties) but this one takes the cake. First of all, the toasted brioche was buttery. Second, the huge hunk of pork belly was cooked evenly despite its thickness. It was fatty and juicy. The slaw was served at the right temperature which was nice; usually slaw is served cold. There was a tang from mustard in the slaw. All in all, a very good combination. 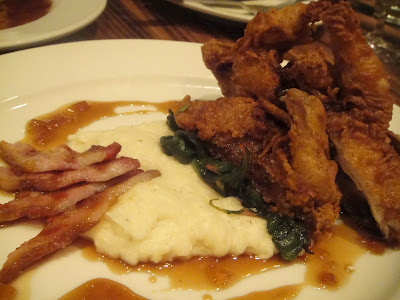 Quail fry, grits, chard, slab bacon, maple jus
I thought they did a good job of frying up the quail. The breading was well seasoned, crunchy and wasn't oily. The meat was tender but was a little under seasoned. It would have tasted better with a bit of salt or if it was brine before it was breaded. Somehow fried birds and syrup go well together. They do it here and they do it over at Roscoe's Chicken and Waffles. I actually enjoyed the grits. Grits can sometimes be bland but this was sweet and went well with the other components of the dish. 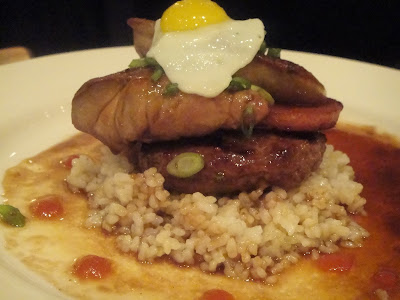 Loco moco, quail egg, spam, hamburger
The traditional loco moco is white rice with hamburger, spam/ham/bacon and fried egg topped with gravy. Animal's is a fancier take on the Hawaiian favorite. I am glad they substituted heavy gravy for a Asian flavor of teriyaki and sriracha sauce. The rice was short grained and cooked well, and sopped up all the juices from the burger, spam, runny yolk and sauce on the plate. The ingredients were all good quality; the burger was Niman Ranch, the rice was Anson Mills gold rice, the teriyaki sauce was homemade, and the foie. Some reviewers commented that the foie was unnecessary but I liked it. I thought it added another layer of richness to the dish. I did wish that they had used a regular egg instead of a quail egg since the former would have had more yolk running all over. But in conclusion, one of the best of the night. Great flavors, rich and all animal.

After four appetizers and two entrees, it was on to dessert. 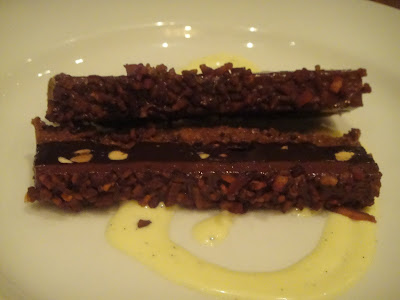 Bacon chocolate crunch bar with salt and pepper anglaise
This is their most popular dessert so we had to get it. The chocolate was kind of compact and heavy and the chunks of bacon just didn't wow me. Honestly, I don't love bacon enough to have it salt up my dessert. I thought it tasted good but I didn't think it was that great. I probably would have preferred a regular chocolate cake over this. 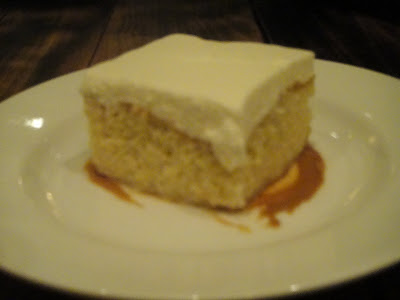 Tres leche cake
Surprisingly, I thought this was better than the popular bacon chocolate crunch bar. The cake had a light, spongy bottom that was soaked with sweetened milk. It was topped with a thin layer of dulce de leche and topped off with a nice frosting that wasn't overly sweet. Delicious. 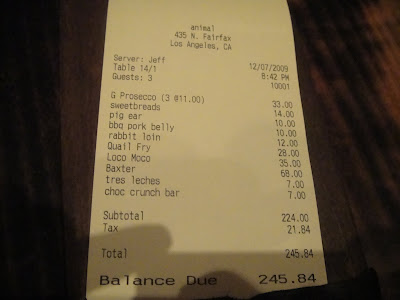 The bill was funny; as you can see we ordered all heavy meat dishes. Animal really knows how to take meaty comfort food and add it's own spin to it. Yes you'll see foie gras, but it'd be served with biscuits, gravy and maple sausage. Head cheese is paired with fried cornbread, and steak is served with artichoke hash and Parmesan fondue.

Overall, service was good although our water was not refilled which is necessary given the saltiness of the food. The staff was really knowledgeable; when we asked what garnishes were on the plate, they were able to point it out even though it wasn't listed on the menu. Our waiter gave good recommendations and obviously has eaten and enjoyed the food at the restaurant. The only other comment I have was with their reservation policy. It was interesting that when we called a week earlier, they would only offer us a 6.45pm reservation (not 7pm), however it was still only a quarter full by 7.30pm. And like many dining establishments, they'll give your seat away if the whole party isn't present within 15 minutes of the reservation. I understand that restaurants need to manage tardy reservations but I just don't think this rule should apply to all restaurants and at all occasions such as:

#1. If most of the party is present and they start their meal irregardless of the arrival of the last guest. I get it if the restaurant was a fancy joint that served ala carte only, but shouldn't it be more flexible if it was serving family style? Does it matter that one last soul dropped in later for a drink and a bite of a couple dishes? It don't think this would increase the dinner duration materially.

#2. If the place isn't packed. The place was virtually empty for the first 1 1/2 hours that we were there and it only got crowded at around 8.30pm (on a Monday). I know some places have to be strict about their reservations (busy restaurants such as Mozza or The Bazaar), but if there are consistently empty seats in the restaurant especially since it's a Monday, why make it inflexible for the diners that have secured reservations and are committed to dining there.

Anyway just ranting. This isn't a jab at Animal, it's just something that I've seen increasingly in the past year. Our whole party was there on time so we didn't have an issue. But it just bothers me sometimes when a restaurant imposes strict policies when it isn't necessary, especially on a slow day of the week for a non-busy time slot.

In conclusion, I have to say that dinner at Animal was an amazing meal. I enjoyed almost everything that we ordered including the wine. The menu was unique and the food was executed well. Animal serves good, hearty, rich, decadent food with a modern spin. Yes, it's not for everyone. You really have to want, and need, and lust Animaaal.

I went to Animal recently (and blogged about it) and we were totally blown away by the pork belly sliders and the tres leches cake. We're planning to head back, just for those two =). I also want to try the quail fry. Nice work with the descriptions. I'm surprised to hear about that 15-min rule. Our ressie for 6 people was at 7:30 on a Thur night, and one person didn't show up until 8 or so, but they still seated us at 7:30. hmmm. Water refilling was fine for us.

Yeah I think the water non-refilling was really a fluke because they were pretty on top of everything else. Good to know that they still sat you eventhough the whole party wasn't there :)