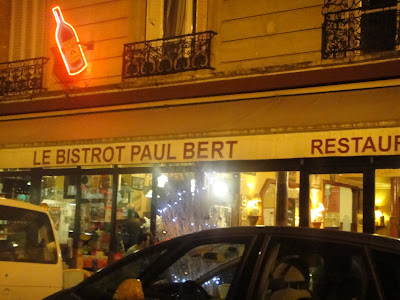 It's been about three years since we've been back to Le Bistro Paul Bert which was one of my sister's favorite restaurants back when they lived in the 11th. I recall the food to be good, classic French bistro fare with a lot of heavy pork dishes offered in the winter. Critics for many years agreed that it was one of the better bistros in the city. 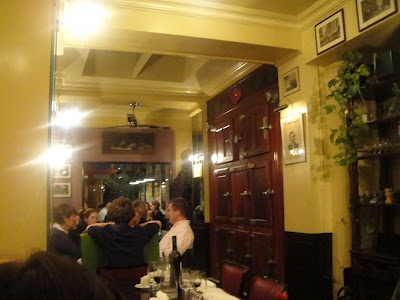 The restaurant was filled with wooden tables and pictures of game animals on the wall especially of hares. Paul Bert has expanded its space in the last couple years due to its growing popularity. I remember when it was a tiny cozy spot with cramped seating. The bistro was still filled to the brim but now with more English speaking patrons. Is this a sign that it has been taken over by tourists? We'll soon find out that although the food is still good, Le Bistro Paul Bert did not seem to be the 'must-dine-at' place that critics used to rave about in previous years. 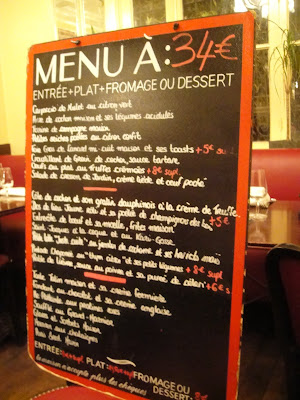 Three course prix fixe menu for 34€ with supplements. You could also opt for a two course for a reduced price. 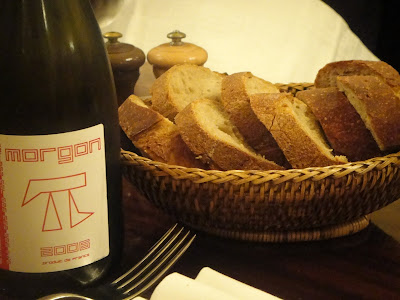 Bottle of wine. It's interesting how the waiter brought over a wine list with a bunch of the lower priced wines crossed off. As such, there were only a couple bottles in the 50€ or less range. As it turns out, they had wine specials on a chalkboard which was hidden in some corner (many bottles priced in the mid-30s) but he did not even care to share that information with us. Also, he didn't pour the first taste for us. Granted my sister who ordered the wine was on the phone at the time (faux pas, I know but in her defense, she's a new mother who had to check in on her newborn), he left the bottle on the table and never came back to pour the first taste. 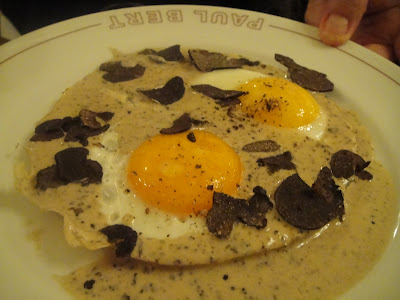 Oeufs au plat aux truffle cream +8€
It's hard to think of eating eggs for dinner but throw in some truffles and it's definitely a dinner plate. The sauce was rich and creamy with shaved truffles. Delicious, but perhaps a tad too rich with the yolk and truffle cream sauce combination. The sauce is great with crusty bread. 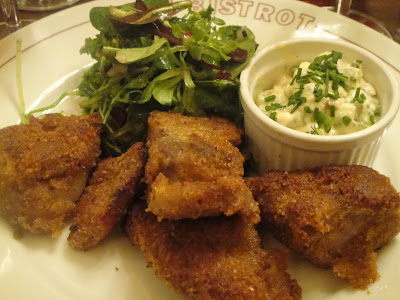 Croustillant de groin de cochon/breaded pork snout
I was excited to order this. The pork snout was breaded and fried. The snout itself was rendered down to a point that it was soft and buttery. It had a fatty texture and flavor that reminded me of the amazing pigs ear that I had at Church and State in Los Angeles. The groin de cochon was perfect as is, with no need for the tartare sauce. The cochon had a very strong pork flavor and the gooey, melted cartilage may turn some diners off. Not me though. But I did see an American couple beside us order this (probably without knowing what it was), then tasted it and had that puzzled look on their faces. The woman pushed the rest of her piece of cochon to the edge of the plate while the man gallantly tried another piece, this time dousing it in copious amounts of tartare sauce. 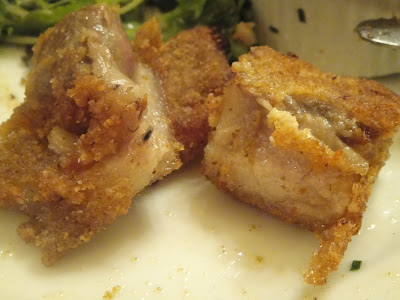 The cross section of the cochon. It looked a bit like Chinese crispy pork belly. 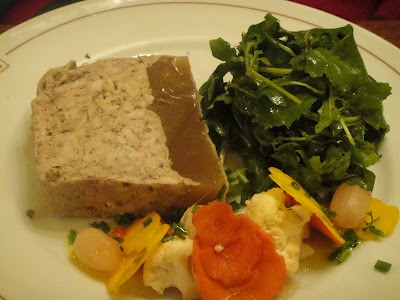 Terrine de campagne
Regular country pate was good but not anything special. I think I might be done with terrine on this trip. I've found them decent but there are so many other items to discover on the entree menu. 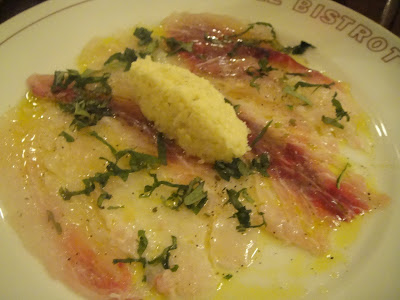 Carpaccio of mulet with citrus
Thin slices of fresh fish with a light dressing. 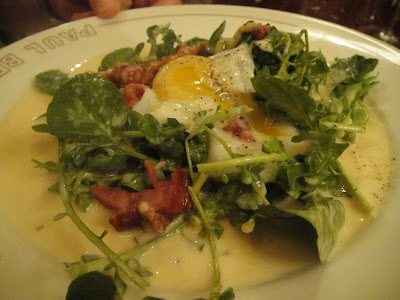 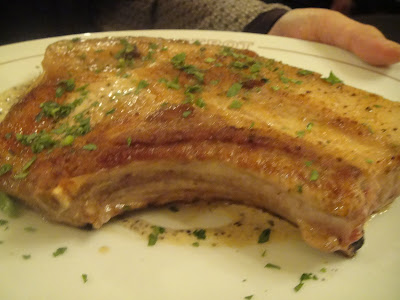 Cote de cochon with gratin dauphinois ala creme de truffle +5€
This was the side of a pig, one of the biggest piece of pork that I have ever seen served. The slab was juicy and looked just like pork belly. The meat was lined with a thick layer of fat and crispy skin. The skin looked tempting to eat but you had to work hard to get the skin off the fat. 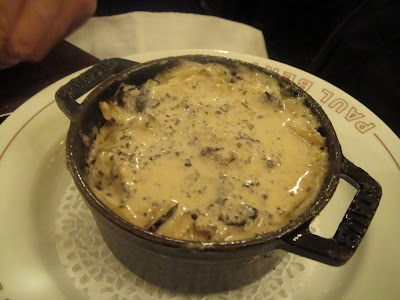 The supplemental 5€ was likely for the gratin which was creamy and rich with layers of earthy truffles. This was truly heavenly and I would have eaten the whole thing if I didn't have my own plate. 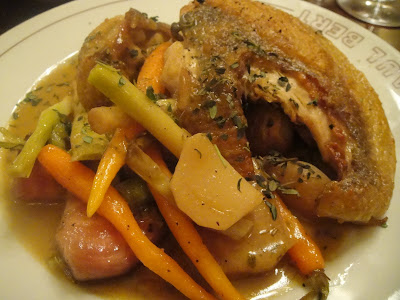 Chapon with thyme, cippolini onions, carrots +8€
Although we've had chapon a couple times on this trip, this is the first time that I have actually ordered it for myself. I liked the crispy skin and the very tiny drumstick. However, the white meat was not as juicy as I had hoped. Honestly, I have had juicier chicken in the form of a rotisserie chicken from Ralph's. The chapon was nothing special and definitely not worth the supplement since it just tasted like regular roast chicken to me. The sauce however was flavorful. 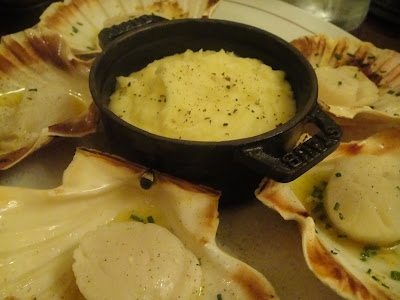 Cocquilles Saint-Jacques au kari gosse
The scallops were cooked in white wine and kari gosse, a Breton spice and served in their shells. Quite a small serving and my sister and her husband who both ordered this were done in seconds. 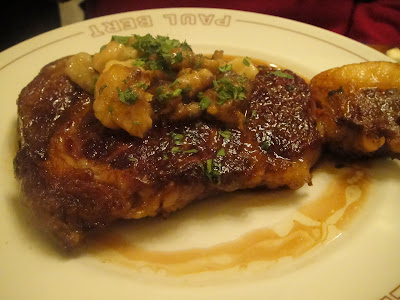 Entrecote de beouf with frites
This is one of the bistro's specialities. The meat was cooked perfectly, saignant on the inside which is common for French cooking and juicy from the fatty piece that ran along the cut. Atop the beef were crumbles of bone marrow. I am a lover of bone marrow but I thought this needed a bit more seasoning. It was like pure raw fat and had the taste of a wet rag. Such a pity as we had to let glorious marrow go to waste. I watched as our American neighbors played around with the marrow, proceeded to ask the waiter what it was and when told it was the marrow, cringed and perhaps looked a little ill. Great concept but I think it fell on the execution. 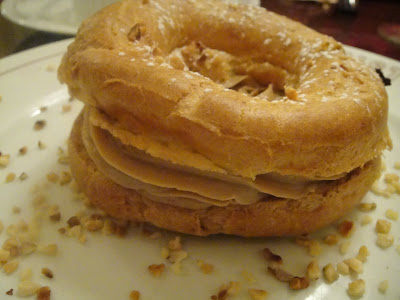 Paris brest: Choux pastry with hazelnut cream
This was one of their more popular desserts. I was eager to try this and compare it to the one I had at Chez Michel the night before. The verdict? Chez Michel's was better as the pastry was airier and the cream was lighter. The cream at Paul Bert was heavier and tasted more like custard in an eclair. But if not comparing it to the prior night, the Paris Brest actually tasted good. 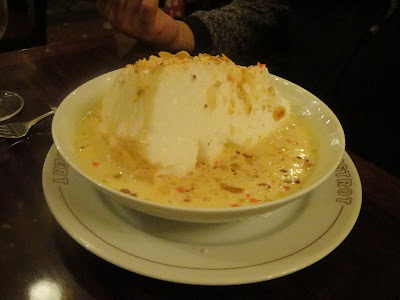 Ile Flottante/Floating island
A meringue floating in creme anglais. The meringue was light and not too sweet. The creme anglais was milky and delicious. It's the kind of thing you'll want to bottle up and save it for the next day to relive with a piece of biscotti. 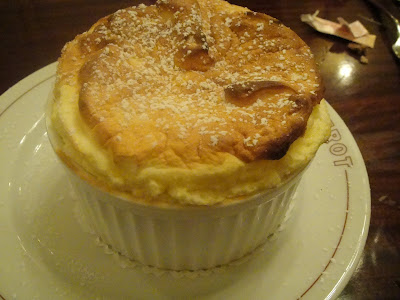 Grand Marnier Souffle
The light, fluffy cake emited alcoholic fumes when you broke through the top. The inside was hot and soft. This is the kind of dessert that is so airy that you can't possibly believe that it'll set you back over 500 calories.

They were no disappointing dishes at Paul Bert with some memorable (groin de cochon). Although the food at Paul Bert was good, it was not as exceptional as we remembered. Could it be due to the standards in the kitchen? Has it become a bit too touristy? Have our tastes changed or matured through the years or are our expectations now much higher? Perhaps it's a combination of all. Service was also less attentive compared to a few years ago perhaps due to the increased number of seating. Unfortunately the favorite neighborhood joint that we used to know is a bit more touristy but who am I to complain, I am one myself. All I know is that Le Bistro Paul Bert is still a place that offers good bistro fare but at 50€ per person, there are many other better restaurants in Paris to visit.