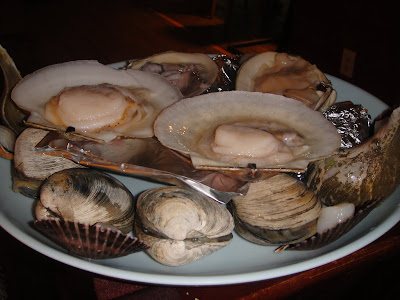 B and K stumbled upon this article in the LA Times and since we all love seafood, we HAD to check it out. Flaming Clam Grill of Cheongdamdong is a Korean seafood restaurant, something that I have never really experienced. After all, BBQ galbi, not seafood, is synonymous with Korean food right?!? Well, I think Flaming Clam Grill will convince you otherwise. They offer multiple course menus consisting of fresh seafood at good prices and they'll even cook it for you. After this meal, I'd be reluctant to head back to a DIY smokey Korean BBQ joint. 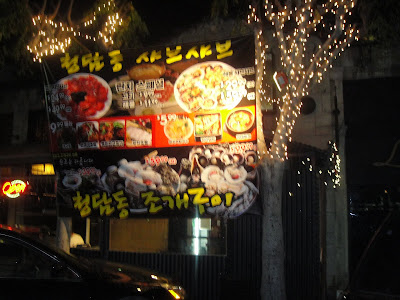 The restaurant is located in Chapman Market in Koreatown, a historical cobble stoned complex that houses retails stores and restaurants. They offer valet ($2 with validation) which is a good thing since parking can be a hassle in the area. 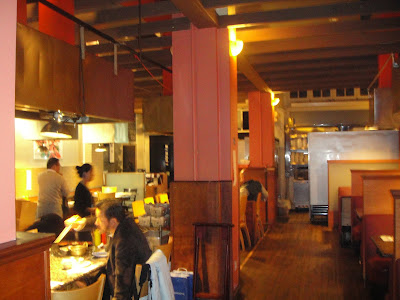 It's clean and well lit inside the restaurant. Each table was fitted with a grill and the ventilation seemed pretty good. 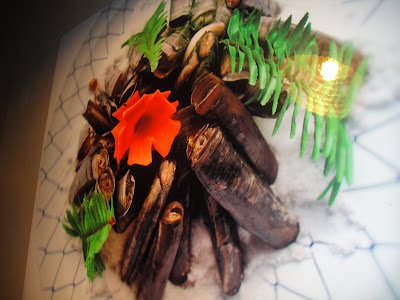 There were photos of shellfish on the wall, perhaps as an homage to the ingredients that helped inspire this place. This photo of razor clams was hung right by our table. Honestly, it looked a little scary but I knew it would taste oh-so-good. 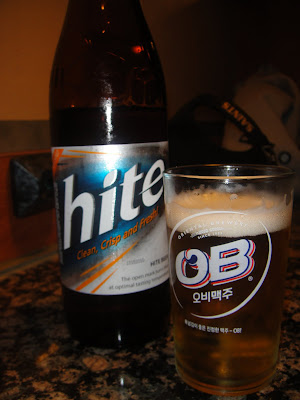 We started with some cold Korean beer. The menu is pretty simple; you can choose the small/medium/large platters for $39.99/$59.99/$99.99. We went with the medium platter since there were four of us. There were a couple other items on the ala carte menu but since our waiter barely spoke English, we had a hard time inquiring about them.

As with most Korean joints, they brought over banchan which is basically an assortment of free appetizers. 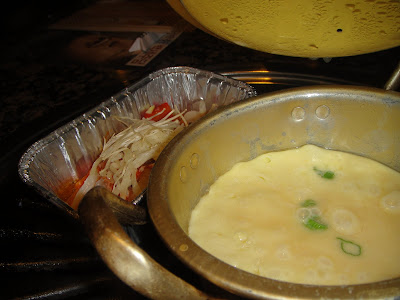 There was a raw egg concoction that cooked into a custard after it was set on the grill for about ten minutes. The egg custard was simple but well seasoned. There was also a tray of spicy rice cakes with seafood and cheese that slowly warmed up on the grill until the cheese melted and created a gooey layer over the chewy rice cakes. I liked the interesting texture of the dish and the spiciness. It reminded me of ddukbokki which is a spicy Korean rice cake and fish cake dish. 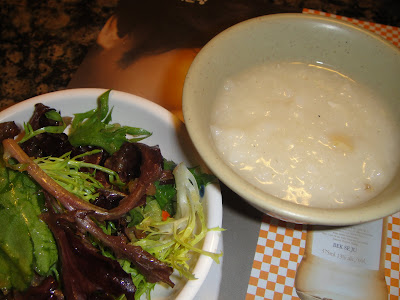 Seafood porridge/congee and salad. The porridge conjured up childhood memories at the table. It was simple and had a mild seafood flavor. Not sure what was in it but it tasted a bit like scallops. 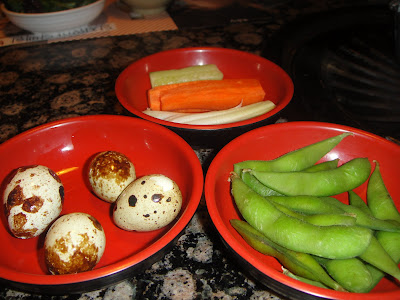 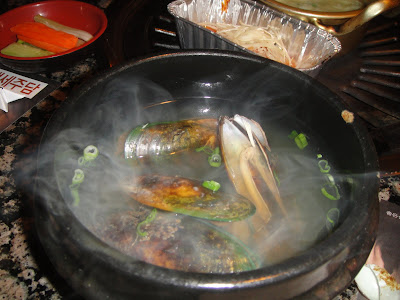 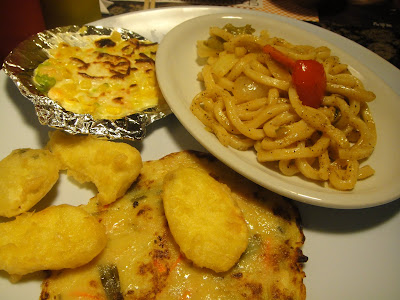 Spicy udon noodles, Korean pancake, tempura potatoes and sweet corn dynamite with shrimp.
I liked everything on this plate. The noodles were simple yet packed a punch. The dynamite was good too: the sweetness of the corn worked well with the creamy cheese mixture. 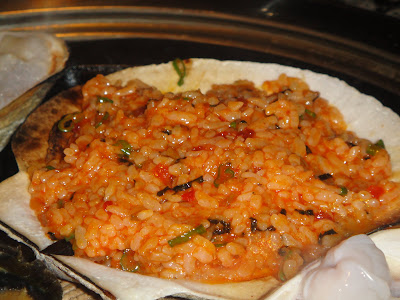 Finally, our waiter took some residual clam juice and poured it over rice. This was my favorite because it was so flavorful and spicy. It was a tiny portion, literally enough to fill a clam shell. I would have loved to have had my own clam shell rice, instead of having to share. I wonder if you could request refills on banchan like you are able to at most Korean BBQ joints.

So yes, those were all just banchan. Just when we were about to fill up on that, our waiter brought over the star of the night: a platter of fresh, uncooked seafood. Since we had communication issues with him, we weren't 100% sure what the shellfish were but speculated that there were clams, oysters, scallops, conch, octopus and shrimp. 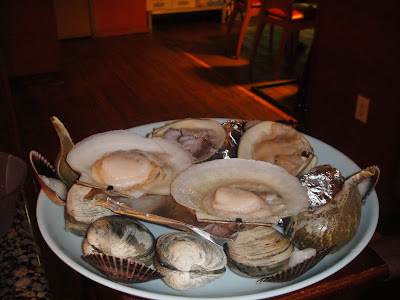 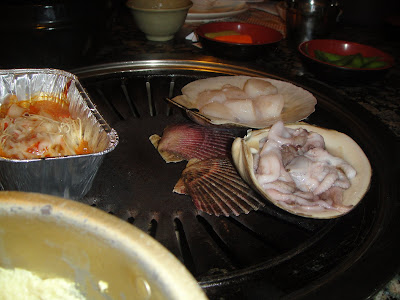 He seemed to have a system going by carefully placing shells on the grill to hold the fresh shellfish in place. He also cooked each seafood group sequentially, pacing the cooking of the different dishes. 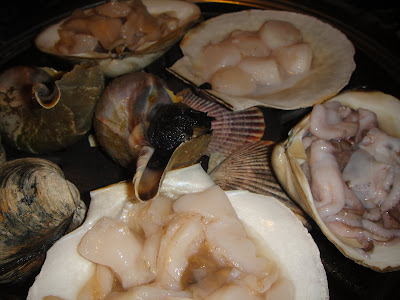 I watched drooling as the various seafood cooked, wondering when it would be done. Don't worry, he'll let you know when each of the items are ready. Trust him, he has obviously been doing this for some time. 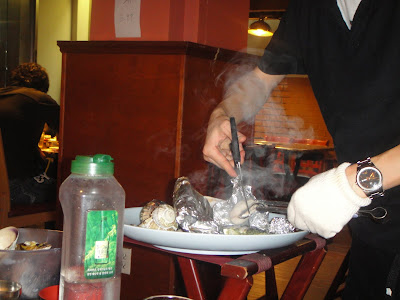 Our waiter then skillfully pulled out the edible parts from the shell, cut the meat up into pieces and reassembled them back on the shells. He also made sure to top off the pieces with juices that were collected in the shells. The scallops were tiny but absolutely tender and sweet. The octopus was good too with tentacles and all. 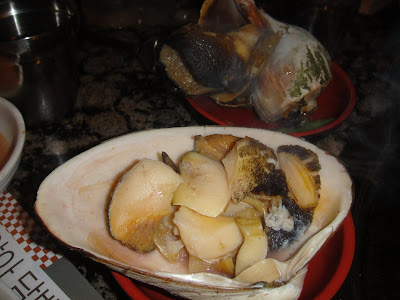 One of my favorites was the clams and conch. It was a nice contrast between the tender clams and the chewy conch. I loved the conch which tasted like a cross between snails and cockles. All the seafood was cooked perfectly and didn't need any seasoning besides its own briny juice. This preparation really captures the essence of seafood and is really all you need. 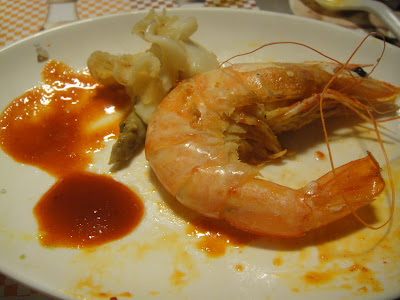 Prawns were steamed in tin foil then placed on the grill to finish off. They were sweet and not rubbery. I like prawns served whole as it keeps all the juices in and I also love sucking out those fishy prawn brains :) 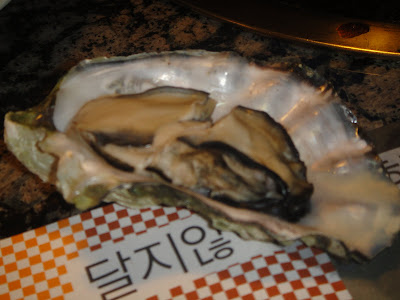 We each got our own Grilled Oyster which was plump and juicy. I don't think I've ever had grilled oysters before and I have to say that I preferred this to fresh oysters because it was served warm, was dense and not slippery like fresh oysters, yet it still had a strong seafood flavor.

After our waiter cleared off all the shellfish from the grill *sob*, he brought over kimchee and a pot of noodle soup. 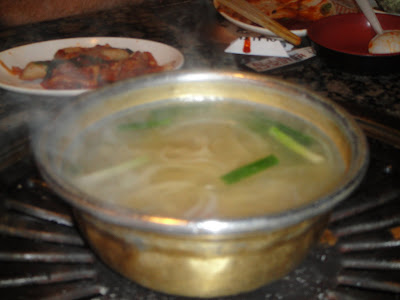 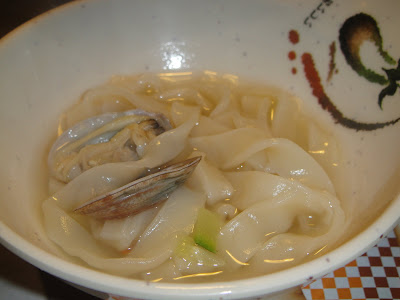 The soup was a light broth and was soothing and perfect for a cold winter night. There were a couple clams in the bowl.

The bill came up to $78 excluding tip for the four of us ($25 including tip per person). A great deal and we all enjoyed the meal. If you are a shellfish lover, this is the place for you. The seafood was fresh, it's affordable and it was pure entertainment watching the waiter effortlessly shuck oysters. The food was prepared simply but yet the ingredients were premium. I loved how they stayed true to their seafood theme in every dish including the banchans. Dining at Flaming Clam Grill is a fun experience and the best part was that you didn't even have to lay a finger! It's good to know that Korean food doesn't always have to equal BBQ meats (although I can never turn that down either). Sometimes, it's more interesting to feast on grilled shellfish prepared by a experienced server.