A bit of the French country at La Provence Cafe, Brentwood 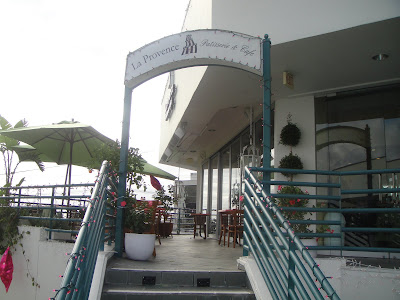 La Provence is a cafe bakery that opened three months ago in Brentwood Gardens, the same complex as CPK. The first location opened by French pastry chef Farshid Hakim is in Beverly Hills. Beverly Hills + Brentwood. I'm sure you can guess who their target demographic is. 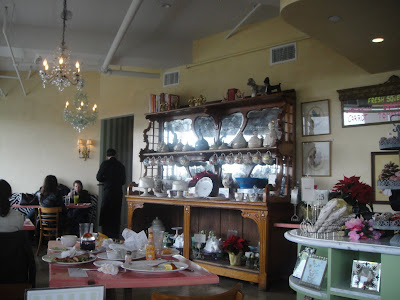 You might not be able to find it if you are not looking for it because it's located on the third floor. The cafe has a very neighborhood vibe and is quaint with it's pink and pastel green colored theme, zebra prints couch, chandeliers and kitschy antique items for sale. They also have an outside patio area with blankets draped over the chairs for customers when they get chilly. Nice touch. 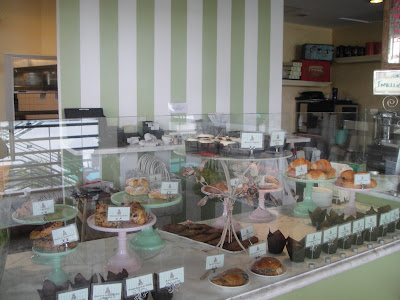 Display of fresh baked good. There's a nutella croissant with my name on it. *Need *to*resist*urge* 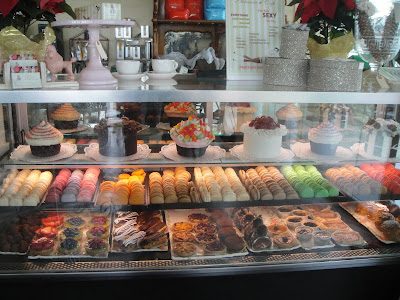 Display of dessert, macaroons, pastries, tarts and cakes. You really feel like you are in a Parisian patisserie with all the lovely, vibrant colored macaroons which look too pretty to eat. 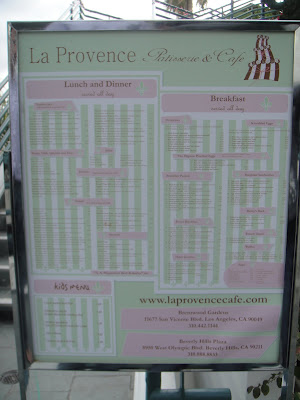 The menu is broken out between breakfast and lunch/dinner. Breakfast items include just about anything from omelets, eggs, paninis, waffles and french toast. Lunch/dinner offers sandwiches, soup, salads and a couple entrees such as lamb chops and burgers. Items are made with fresh, organic and locally grown if available and ingredients are on the higher end (salmon, french ham, prosciutto). We ordered up front and were assigned a number. Sigh no alcohol license YET, but apparently it's coming in two weeks. I can't wait to order a mimosa with brunch. 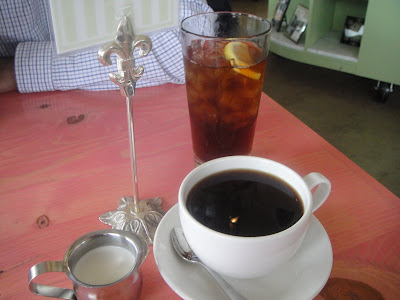 Their coffee comes from highly-raved Intelligentsia. Personally I can't tell the difference. I drink a lot of coffee (three big flasks a day) but I don't have a preference between a "quality" coffee vs. regular coffee: I even like diner and gas station coffee. No one came by to refill my coffee (under if it comes with refills..) 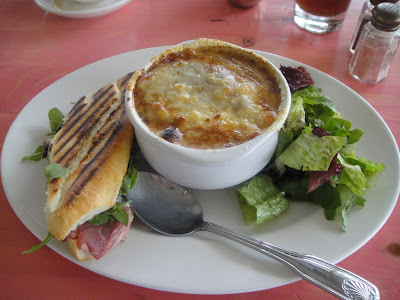 Half sandwich and soup
The half sandwich was prosciutto and brie. They weren't joking when they said half a sandwich, it's smaller than the spoon. The soup however was massive for being a cup/half bowl. There were a few soup options (vegetable puree, chili) but the must-get is the Vegetarian French Onion soup. This was the highlight of the day. The broth was flavorful that you didn't even realize that it wasn't thick, rich beefy stock. The cheese on top was the perfect amount and browned a little, reminiscent of a good layer on top of a lasagna. The Gruyere was mild and not overwhelming, even for someone that treads lightly on cheese. As I looked around, almost someone at every table had the same idea and ordered this soup. 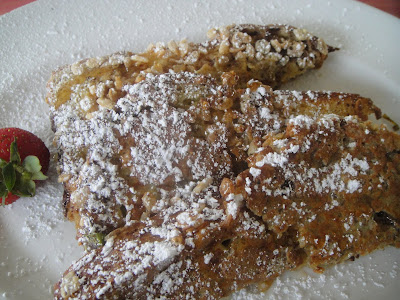 Crunchy Brioche French Toast
I wasn't lying a few posts prior when I said that I can't resist a french toast if it's on the menu. The crunch of this version came from rice crispies that coated the bread. Honestly, I found the french toast to be plain. There was no butter and the bread was a little dry. Besides the cinnamon and powdered sugar, it tasted really bland. They had another option (chocolate brioche french toast) which might have been a better choice. I hate to say it but I actually preferred the one that I had the day before at casual No Ka Oi in Huntington Beach because it was softer and had more flavor. Also the La Provence version looked boring; the french toast just came on its own with nothing (no potatoes, salad) on the side. 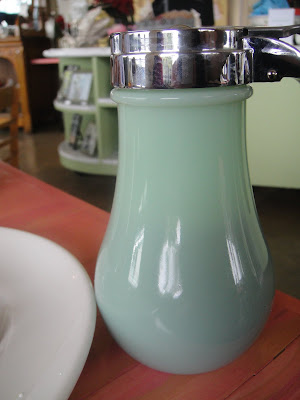 Cute maple syrup jar which looks very retro.
La Provence Cafe is a great brunch place in Brentwood. It's less crowded than Coral Tree Cafe a few steps away, service was friendly, the cafe was very homey and served good quality food. It's a bit upscale (hey, we're in Brentwood after all) but still affordable depending on what you order (1/2 sandwich and soup for $10 is a good deal but french toast and no sides for $9 may not be). When we left, we passed by the dessert display. Very tempting but perhaps next time.