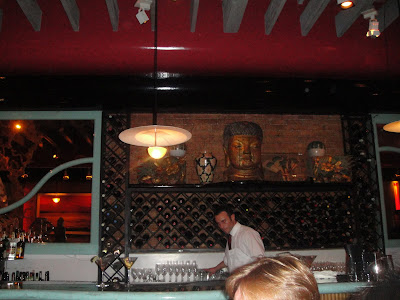 I've been to Chinois on Main a long time ago. The restaurant is Wolfgang Puck's Asian fushion creation; which was one of the first of its type of cuisine at the time. The restaurant has an open kitchen concept and the decor appears to be stuck in the 80's. I mean, turquoise tables and tiled floors? Yikes. Well, at least the food is good.

The idea of Chinois was revitalized in our minds when we saw the episode of Andrew Zimmern (of the Travel Channel's Bizarre Foods) who dined there and ordered the fried rooster testicles. I've never tried, and it can't be THAT bad if it's fried, right? Unfortunately (for me), it was not on the menu, even if you had requested it ahead of time. Either way, I was still game to go.

Dining with me were B & hubby, Justin, Jessica and me. You have to get a decent size group when dining at Chinois because the portions (including the appetizers) are large. 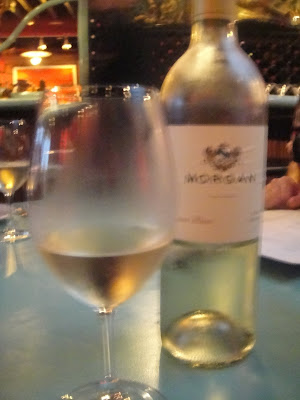 I was running late (darn that meeting!) and was proud of B for ordering a bottle of Savignon Blanc.

The menu is Franco-Cantonese and the dishes are served family style. Most of the appetizers are priced in the high teens to low twenties, and entrees range from $30 to $50. We ordered two appetizers, two entrees and a side of fried rice. 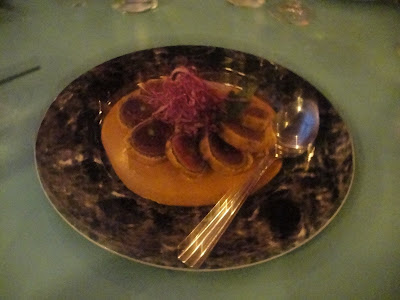 Tempura ahi tuna sashimi with fresh uni sauce. Uni is definitely on my top 10 list of favorite ingredients. Whenever I see it on a menu, I HAVE to order it. The uni flavor wasn't too strong, in fact some at the table did not even know that it was sea urchin. The sauce also had some wasabi that gave it a little heat. The tuna itself was fresh and tasted good. I thought this was unique and you would not find this at a traditional Chinese restaurant. 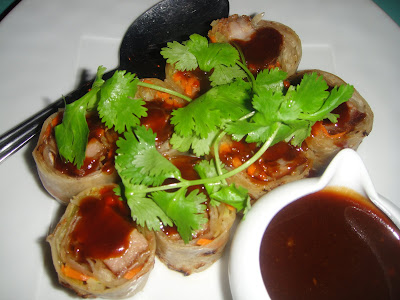 Moo shu with pork belly and julienne vegetables. The skin was a little too chewy and tasted tortilla. The fatty pork belly piece was delicious. They served hoisin sauce on the side but some was sufficiently drizzle on top of the roll. 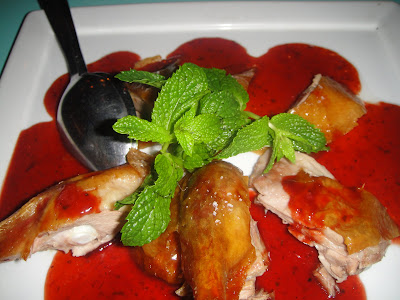 Roasted Cantonese duck with fresh plum sauce. The skin was fatty and salty and the duck itself was cooked well. I enjoyed this dish but you could get duck in a bigger portion and for half the price at Sam Woo BBQ restaurant. 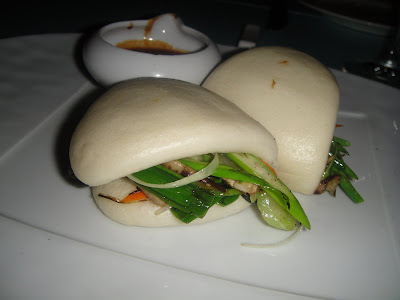 The duck was served with steamed Bao. The bao was filled with grilled scallions. Interesting how they only brought out two buns for a table of seven. I would loved to have had my own bao so that I could fill it with some duck meat/skin. 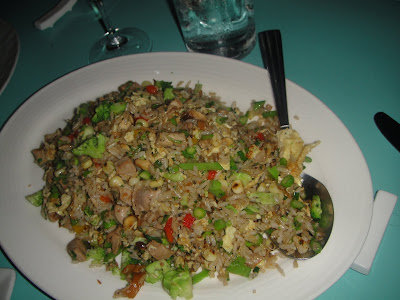 Duck fried rice with crunchy veggies and garlic chunk. This was so delicious that I had a couple scoops of it. The rice was flavorful and the veggie chunks gave a nice crunchy texture to the rice. 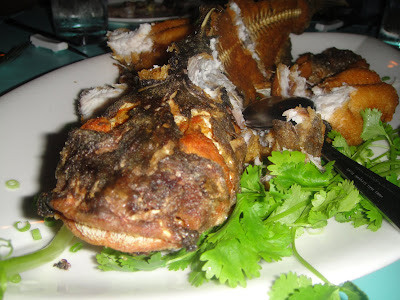 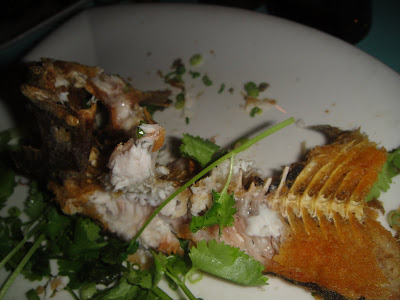 Whole sizzling catfish with ginger ponzu sauce. When they say whole, they mean whole. Eyes, cheeks, bones and all. The fish meat itself was rather bland but the sauce over it and the fried skin were delicious. B and I really enjoyed the fried fish tail. It's all cartilage, deep fried and crispy. 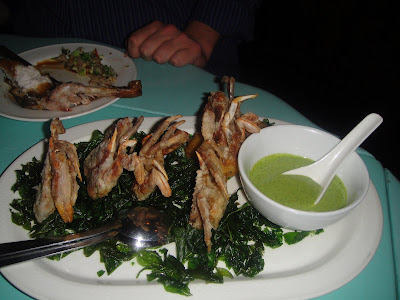 Special of the day: soft shell crab fried with deep fried spinach and cilantro honey mustard vinaigrette. We didn't order this but apparently Justin's dad is a regular and when the waiter recognized Justin, he brought over this dish. Those little crustaceans were delicious. Since the shell is soft and the whole crab is slightly breaded and then deep fried, you can eat the entire thing. I also really liked the fried greens, granted that they had absorbed a lot of oil.
Lastly, dessert. It's interesting how the food menu was heavily Asian influenced but the desserts were French. I suppose there aren't that many Chinese desserts, except for fresh fruits such as lychees and logans. 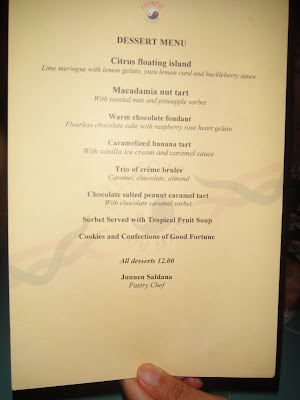 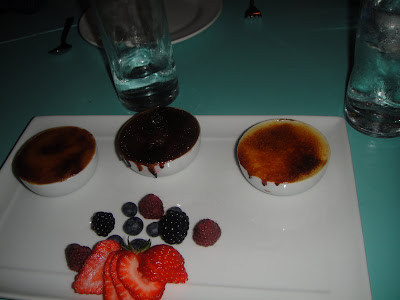 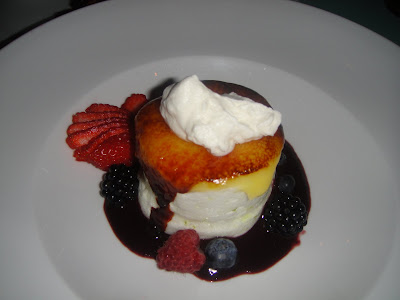 Citrus floating island: Lime meringue with lemon, huckleberry sauce. Lovely presentation but a little too sweet and tart. Berries were a vibrant color.

The bill came to about $50 per person, including tip. The food at Chinois was good, albeit expensive for Chinese standards. After all, a feast at a Chinese restaurant can cost less than $20 per person. But when you dine at Chinois, you are there for the tradition (it's been around for over two decades), the fine dining (you don't have to worry about a "C" grade that is prevalent at many Asian eateries) and the creative plates. Don't go there expecting to eat the most authentic Asian dishes. And if you do go, try to invite someone who is a Regular, for some comped dishes ;-)