A bit of an upper scale gem on Sawtelle: Restaurant 2117

Sawtelle is the mini Japan town located in the Westside. There are numerous Japanese restaurants lining the short stretch of Sawtelle between Olympic and Le Grange. Some of my favorites are FuriaBo, Orris, Blue Marlin and of course Nijiya Market where I purchase all my favorite Asian snacks. Restaurant 2117 is a little more expensive than the other restaurants on the row. It focuses on Japaneses/French/Italian cuisines and on organic and fresh ingredients. 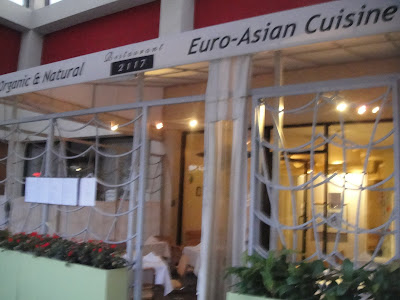 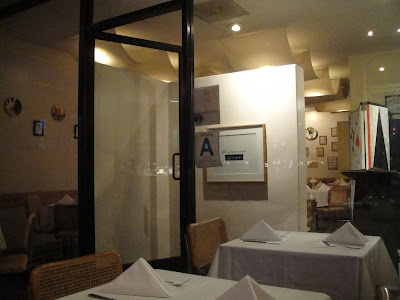 On their website, they listed a prix fixe dinner menu for $38. You get two small plates or salads + one entree + dessert, and the entire table has to order the prix fixe. What's so good is that there are about 20 choices for small plates/salads so you aren't limited to a tiny menu. Appetizers range from tempura, to tuna tar tar and sweetbreads while the entrees include fish, steak and a myriad of pasta dishes. That sure sounded like a lot of food but it's French fusion right? I'm thinking that the portions would be small.

When we got there, I grabbed a seat outside on their patio. The prix fixe menu wasn't on the menu but they still offer it if you ask. There is a surcharge if you choose appetizers greater than $7.95 or entrees over $19.95. Not a problem, most of the items fall within the range. We were definitely going to partake of this. 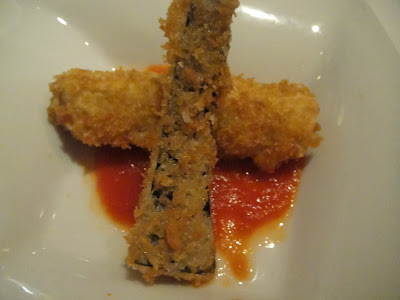 Amuse bouche. Aww.. I love amuse bouche and was surprised that they brought it over. Yes..it's French fusion. How quickly I forgot. This was fried zucchini and eggplant, served with a marinara sauce. The veggies were fried crispy and the tomato sauce was mild and lightly salted. Not too heavy at all. This definitely whet my appetite and I was looking forward to my two appetizers, entree and dessert. Oh, and two glasses of wine as well. 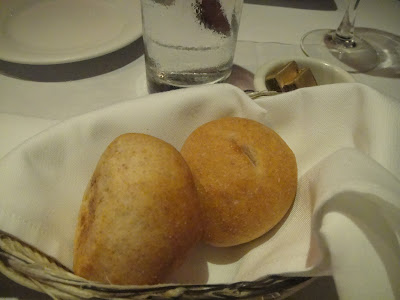 Homemade bread, as our waitress mentioned. I wouldn't have even realized that it was homemade; it was nothing special. 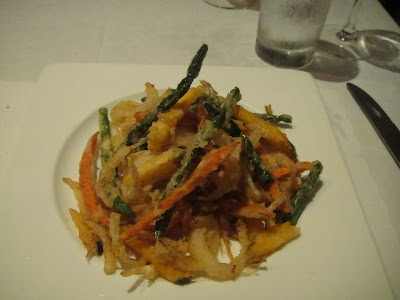 Organic vegetable kakiage tempura. Wow, that's a huge plate of fried veggies. The tempura was well breaded and crispy. Yummy and what a good way to get in your greens. 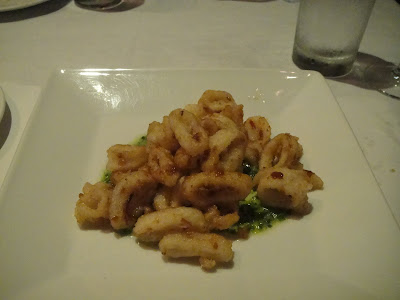 Fried calamari with garlic parsley sauce. I loved the sauce; it reminded me of the bath that escargots swim in. The calamari tasted like it had a bit of black bean sauce drizzled on top. The breading was a little dense and filling. This was one of our favorite dishes. The flavors were there and it wasn't just a regular calamari dish that was salted with salt and pepper. 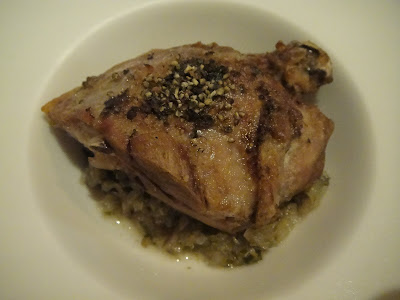 Half Duck confit leg with ravigote sauce. The duck was tender and the skin was crispy. The only issue I had with this dish was the ravigote. It was mushy, sour and tasted like sauerkraut. I think I would have preferred a drizzle of honey or red wine sauce instead. 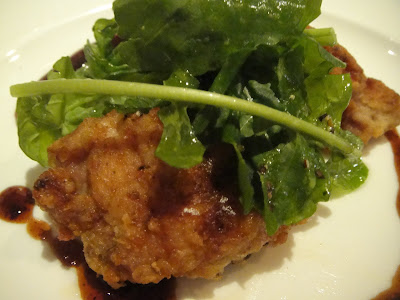 It's interesting that the two better appetizers were the less extravagant ones. I really liked the flavors of the tempura and the calamari. I thought they were both well executed. The duck and sweetbreads were good but not memorable. I suppose it's because I've had many exceptional and unique duck and sweetbread dishes so these did not standout. 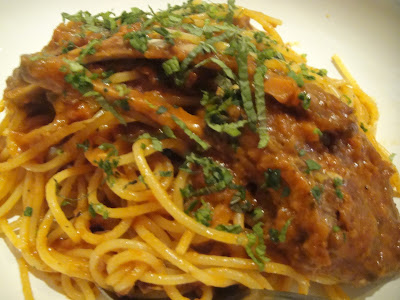 Rack of lamb with pasta in tomato sauce. This was from the specials so it was over $19.95 (about $23). The pasta was el dente and thick enough to grab up all the sauce in each bite. The tomato sauce wasn't runny; it was thick and felt like it had been simmering and absorbing all the goodness of the lamb. There were three lamb chops and they were fork tender. It was such a rich and comforting dish; the type that you'll want to eat in the winter, or if you are sitting out on a patio in the crisp L.A. evening. It was such a generous portion so I packed half to go for lunch the next day. 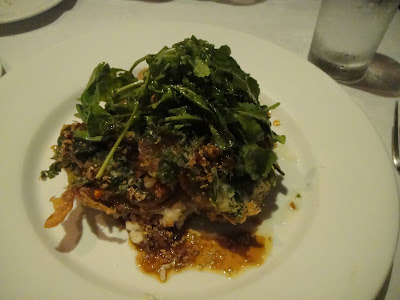 Crispy cilantro crusted fresh soft shell crab with tahini risotto and greens with spicy ginger sesame vinaigrette. This was a seasonal special and came highly recommended on Yelp and CH. The crab was crispy but a tad salty. The sesame dressing added good flavors to the deep fried greens. The risotto was just alright, though. I did not even realize that there was tahini flavors in it. Also, it had more of a rice texture instead of that creamy risotto texture. Apart from the risotto, everything else on the plate was amazing.


Last but not least, dessert. We were not given a choice so I was expecting a scoop of sorbet or a mochi ice cream. Instead, my eyes lit up when I saw our waitress bring over our individually sized ramekins of creme brulee. 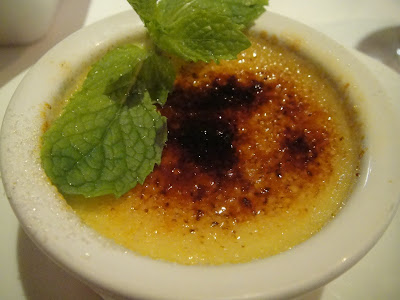 2117 is a fancier Japanese restaurant. The portions were big and the food, for the most part, was flavorful. The service was also attentive. They changed plates and utensils at each plating and the female owner/manager came by a few times to check up on us. Although some reviewers complained that it was too expensive, I thought that the prix fixe is a good deal if you are hungry. I liked that there were so many options and you weren't stuck with some boring salad or chicken. Besides, if you are hoping for a cheap meal, hop over to all the other restaurants on Sawtelle. You can get your bowl of curry or ramen for less than $10. But if you want a fancier meal with attention to detail, you know exactly where to go.