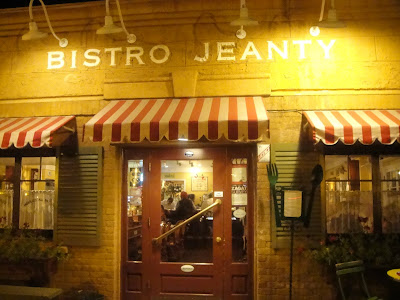 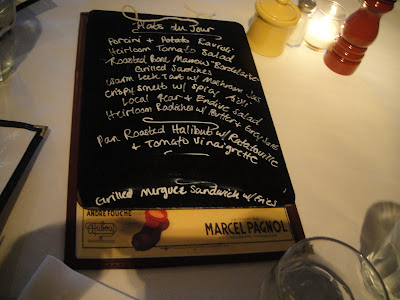 I am not going to lie to you. The French Laundry was my #1 pick for dinner while we were in the Wine Country. But silly me, I didn't know how competitive reservations are for TFL. I called a month and a half before the requested date and after dialing the number over 50 time since I don't have a redial function and their line was always busy with no voicemail option (I kid you not.. the number is still lodged in my brain. 1-707-944.... ), I finally got ahold of a real talking person, only to be DENIED! Sorry everything is booked. She'll put me on the wait list but don't hold your breath.

I did some quick research online and a couple places were mentioned constantly: Bistro Jeanty, Terra, Bouchon and Redd. I've seen Chef Philippe Jeanty as a Top Chef judge so we went with his restaurant. Unbeknownst to me, my father later mentioned that Bistro Jeanty is the restaurant that we frequent whenever we are in Napa and I have actually been there a couple times before. Joining me for dinner was LB, Dilu, Heather, Uday, Melissa and Stefan.

Bistro Jeanty, as the name alludes, is a bistro that focuses on classic French cuisine. When you first walk in, you don't feel like you are in a fancy restaurant. In fact, its homey and welcoming, and the diners are not dressed too formal. 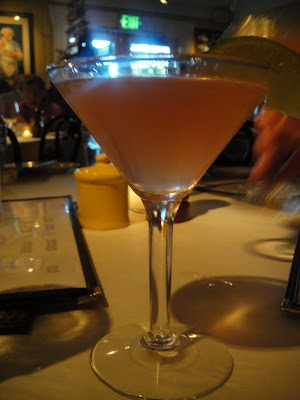 We all started with cocktails. Mine was a cocktail with fresh lime, ginger syrup topped with sparkling wine. Very drinkable but I only limited myself to one because we were ordering two bottles of wine with the food. 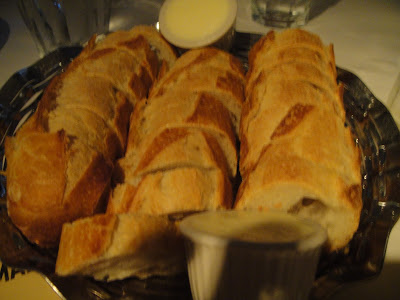 A basket of bread and butter was served promptly. It was your typical French baguette with soft butter. Uday and I must have had half the basket between the two of us...

Selecting an appetizer is difficult because they always look so darn good. Thank goodness the girls were sitting beside me so we could all share! We decided to order eight starters between the seven of us, and an entree each. 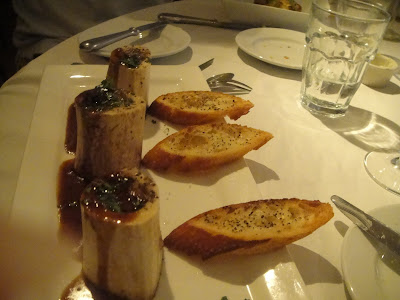 #1 Roasted Bone Marrow. It was a large portion: three bones with ample marrow. Stefan had never tried it and as a marrow virgin, he was won over. The fatty pieces of marrow were well seasoned and smeared on toasted bread. Yes, it really is like eating semi-melted salted butter. It's that good. 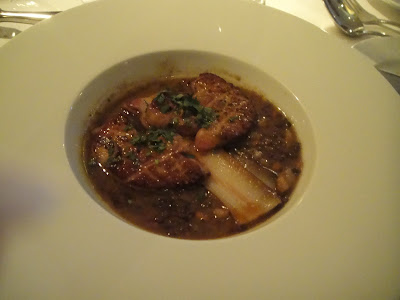 #2 Pork belly with lentil balsamic and foie gras ragout. The pork belly was fatty, but not in a stomach crunching way. Overall I thought the dish was good, but it was a little too heavy; Fatty pork belly + Foie + heavy sauce. 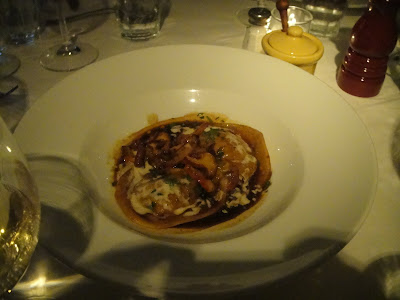 #3 This was an appetizer special: Porcini and potato ravioli. Absolutely scrumptious. The sauce was rich and thick, and the ravioli had the earthy taste from the intense mushroom puree. There were also sliced mushrooms in the sauce for a double dose. Seriously, the flavors of this dish was excellent that I even dipped my bread in the sauce. 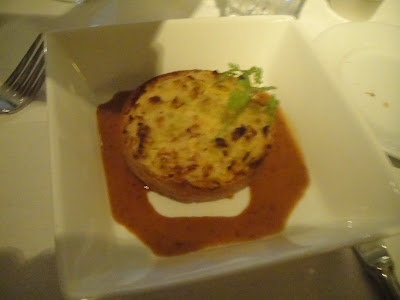 #4 Leek tart with mushroom jus, another from the specials menu. Another good appetizer. The tart crust was buttery and fresh, and I like how the tart was served with a little sauce that added a little more saltiness to the dish. 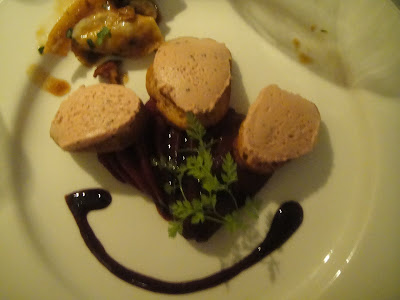 #5 Duck foie gras pate with poached pear. It's hard to go wrong with foie. This dish was delicious and there was a generous serving of foie. However, this is something that you can pretty much get at most other restaurants. 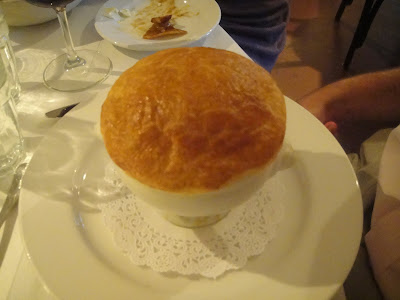 #6 Their signature dish: Tomato soup with puff pastry. This wasn't your Campbell's viscous tomato soup; it's infused with butter and heavy cream. The puff pastry was flaky and baked golden, and really elevated what would have been an ordinary soup. 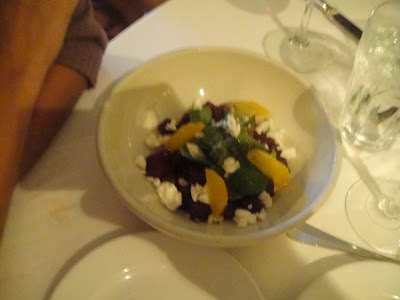 #7 Beet and marche salad with feta cheese and citrus dressing. Melissa is a vegetarian and there were only a couple non-meat options on the menu. This was one of them.
#8 Another starter was the Butter lettuce with mustard vinaigrette *Yawn*
After an amazing spread of appetizers, I think we all regretted ordering too much food. Seven entrees were awaiting us. 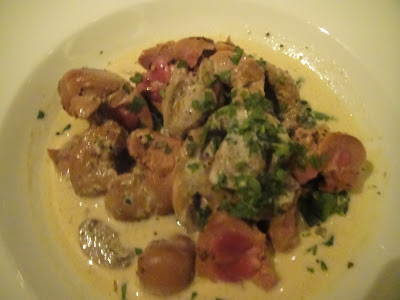 #9 Veal Kidneys in a creamy peppercorn sauce: I am a lover of offal but I had a little problem eating this. I was fine with the texture but the flavor was a bit too gamy for me. I couldn't even finish all the kidneys. I gave my party some to try and most could not finish one bite, and Heather even spit it out into her napkin. I've never had an issue with livers, kidneys, intestines, you name it, but somehow this had a pungent flavor. 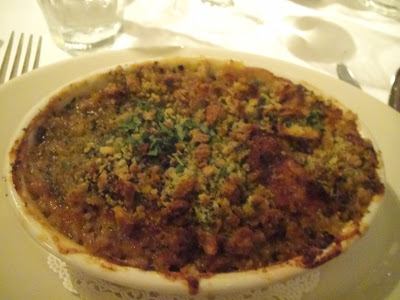 #10 Cassoulet. Baked beans with duck confit, sausage and apple smoked bacon. Absolutely delicious. I wouldn't normally order this dish because bean stew doesn't sound that interesting. However this was really one of the best dishes I've had during dinner. The beans were hard but cooked a little so that it was slightly creamy. The duck confit was flavorful and there was a nice crust on the cassoulet. 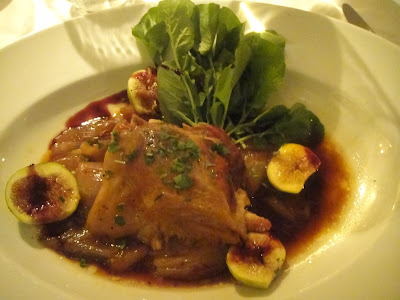 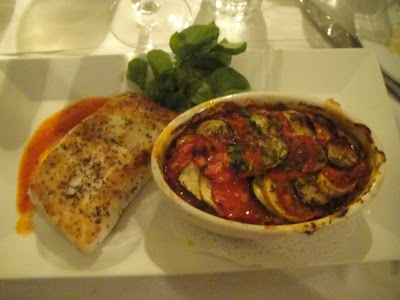 #12 Pan roasted halibut with Ratatouille and tomato vinaigrette. The boys ordered this and the fish was dry. So disappointing. The flavoring of the fish also seemed very normal, and paled in comparison to all the other flavorful meat dishes that we had ordered. 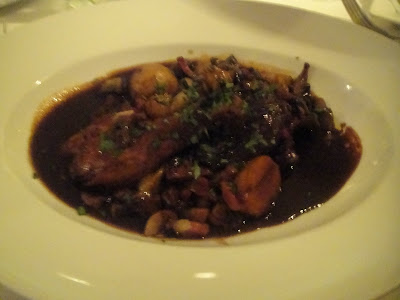 #13a Coq au vin: classic French dish that is a mark of a good French restaurant. This was amazing. The chicken was tender and the chicken skin was soft and absorbed all the great flavors of the sauce. The red wine stew was rich so you had to eat with something else. 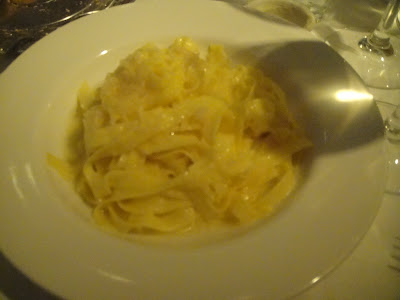 #13b Buttery noodles that is a side recommended for the coq au vin. Simple but delicious. The pasta was fresh and homemade. Everyone was reaching their fork over the table to grab some of this. 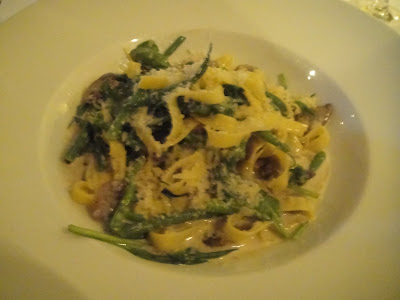 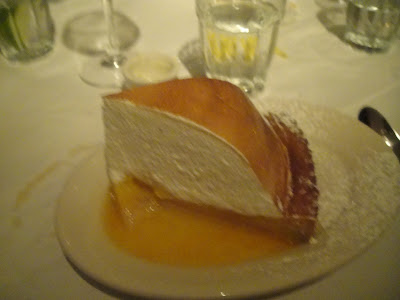 #15 Tarte au Citron: Lemon meringue tart with candied orange sauce. I didn't really care for this. It was tart and too sweet at the same time. To me,it wasn't the type of dessert that closed off an amazing meal. I needed something richer. 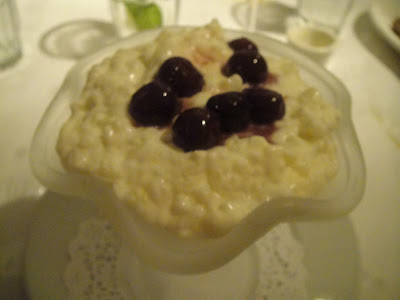 #16 Rice pudding. The dessert was creaming yet starchy. This didn't seem unique, after all I have the Jell-O Rice Pudding cups in my fridge. But actually, this dessert was good because it was light and sweet, and had simple flavors. 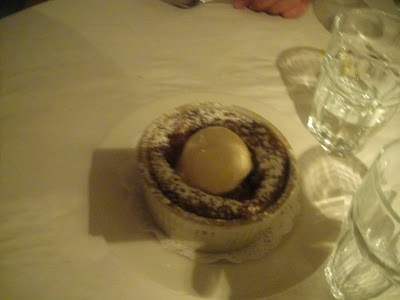 #17 Tarte Tartin: Apple tart with creme fraiche. The tart was warm and the ice cream melted rather quickly. 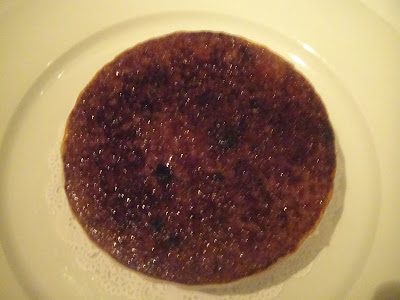 #18 Chocolate mousse creme brulee. Caramelized sugar atop creamy custard. Delectable.
The bill came up to $75 per person, including tax and tip. Not bad considering we all ordered an appetizer and entree each, booze and four desserts. We were so stuffed that we had to take a walk around the neighborhood.
I love French food, and I especially love French comfort food. Bistro Jeanty gave us a piece of home; you felt like your French Grandmother was cooking for you (that is, if you have one). The dishes were simple, non pretentious, but yet had robust flavors. In Yountville where there are many amazing restaurants, Bistro Jeanty definitely ranks high.