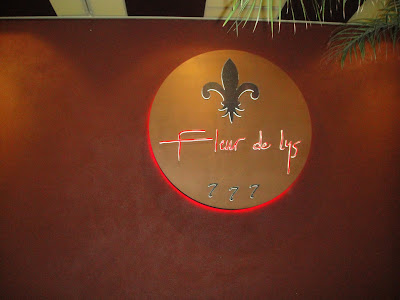 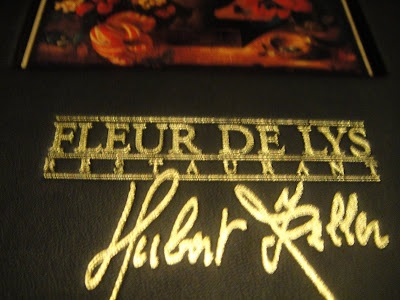 I was in San Francisco for the Outside Lands Festival and since the city houses many amazing restaurants, we decided to fly in an evening earlier. As an avid Top Chef viewer, I was excited to visit Hubert Keller's Fleur de Lys. Hubert Keller is a French chef that was one of the finalists on Top Chef Masters, similar to the popular cable series Top Chef, although this version was for renowned chef. Chef Keller has earned a James Beard Award and the restaurant holds a Michelin Star. 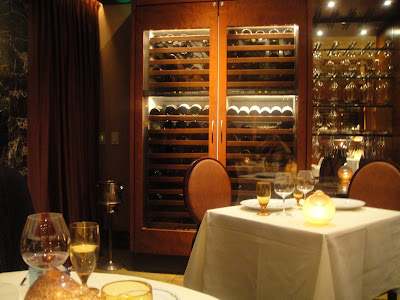 Our waiter Stephen came by to take some drink orders and explain how the menu works. 3 courses for $70, 4 for $79 or 5 courses for $92. Wine pairing is also available for an additional fee. Given that it was almost 9pm, we did not want to overdo it and decided on the three course menu. The menu is French cuisine, with some German and Swiss influences as Chef Keller is from the Alsace region. As such, you'll see some hearty rich dishes, and some lovely desserts.
The service was definitely a little slow in the beginning which isn't necessarily an issue as this is a fine dining establishment and they probably did not want to rush us. However we were trying to flag down the bread lady so that we could have at least something to eat before drinking. She finally came by after our waiter had taken our orders, which was over 20 minutes after we were seated. 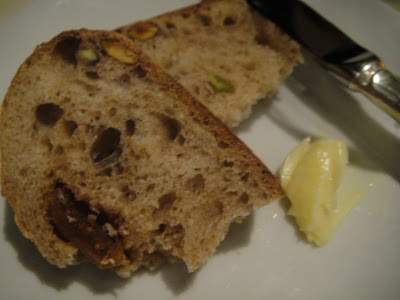 There were three bread options: Olive, Pistachio and traditional French baguette. The Pistachio bread was my favorite. The bread had a nutty flavor and was a little sweet from the apricot bits. 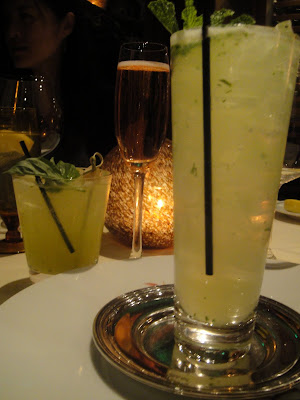 We ordered a round of cocktails. Cucumber vodka, elderflower and basil which was a refreshing drink with just the right amount of sweetness. 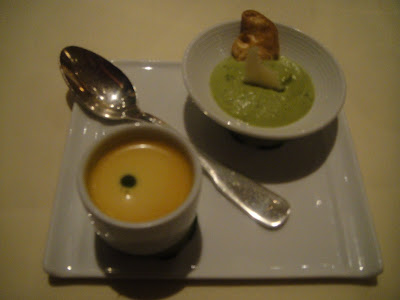 Amuse Bouche #1: Squash soup and fava bean puree, topped with a toasted fava bean and Parmesan slice. The soup was hearty and delicious. I also loved the fava bean puree. It was thick and the bright green color was so vibrant against the orangeness of the squash soup. Nice contrast. 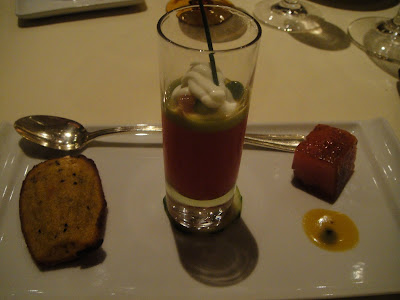 Amuse Bouche #2: Yes, there were two which was a pleasant surprise.
Truffled madeleine, watermelon gelee with cucumber cream, grilled watermelon and a drop of lemon balsamic vinaigrette. The watermelon was refreshing, sweet and cut the saltiness of the prior amuse bouche. The madeleine was our favorite. Little specks of precious truffle cooked in the buttery and spongy madeleine. 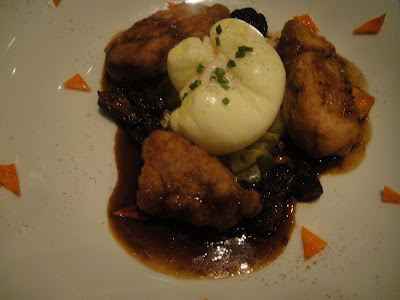 Sweetbreads with poached egg and leeks. Sweetbreads, if not cooked properly, can be a little pungent and rubbery. These sweetbreads were delicious: a slight crispiness on the outside and silkiness in the inside. I also liked the simmered leeks sitting under the sweetbreads which were seasoned well. 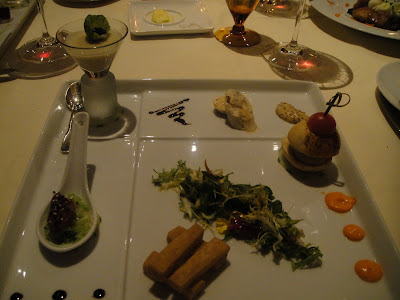 Choucroute with caviar, beef tartare, frisee with lemon vinaigrette and foie burger. Choucroute is the French version of sauerkraut. The foie slider was definitely the winner as it was a rich bite of liver and bread. 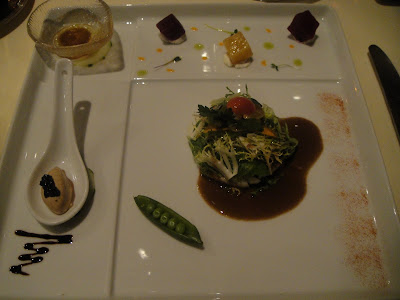 Dungeness crab with frisee salad, beets and goat cheese, and caviar and foie mousse. This dish was just alright. The crab salad was not different from what you could get elsewhere. The plating looked strangely similar to the Choucroute starter. 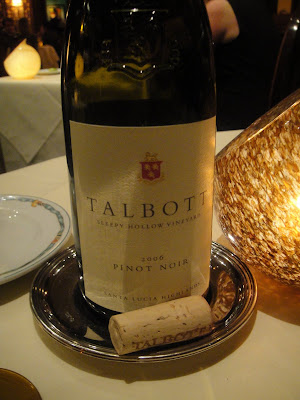 We decided to order a bottle of pinot noir, however they ran out of the wine that we had requested (Whitehaven Pinot Noir from New Zealand). The Sommelier recommended something better (but charged us the same price as the Whitehaven) - the Talbott Pinot Noir from Sleepy Hollow Vineyard. Yes- the clothing store, and No- not the movie. The pinot noir was very smooth and a good choice for the heavy meat entrees that we had ordered. 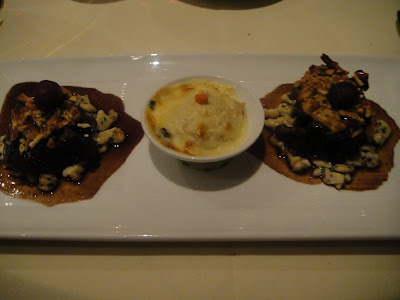 Mustard pretzel crusted beef cheeks on spaetzal, with a sauerkraut gratin. The beef cheeks were tender and flavorful, however the portion was perhaps a bit too generous when compared to some of the other entrees. The pretzel topping was such a unique crust and very German. The gratin was light which was a good pairing with the heavy meat on the plate. And last but not least, the starchy spaetzal that was immersed in the rich beef cheek sauce. Delish! 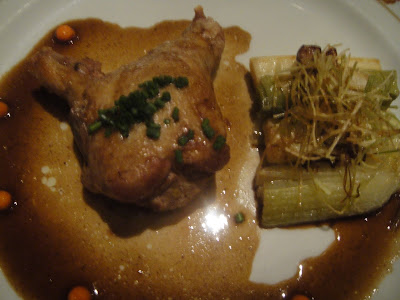 Quail with parsnip, crispy leeks ad foie. The foie was a small piece sitting on the parsnips and fried leeks. I thought that the quail was cooked perfectly and was juicy. The little carrots on the plate were sauteed and very flavorful. This was a simple dish but the flavors were all there. What I've noticed about all the dishes is that everything on the plate is there for a purpose; you will not find a stray garnish at Fleur de Lys. 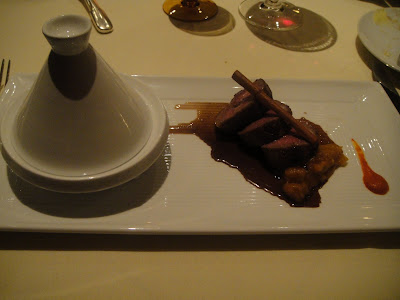 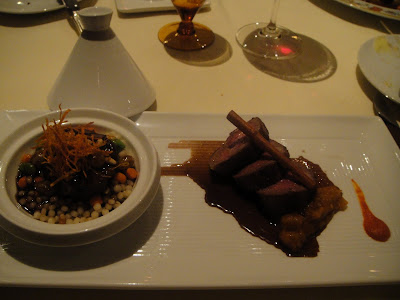 Duo of lamb: Tagine of lamb and rack of lamb. Another very generous portion; in most other fine restaurants, you would only get one part of this dish. Both versions of the lamb were tender and the Israeli couscous was flavorful. Although this dish was good, I thought the two parts were a little disconnected since both portions were large and seemed like their own separate dish.
Now, on to dessert. I think one dessert per person is kind of an overkill, especially since these potions were rather large as well. Although I shouldn't gripe since it's a pretty good deal. 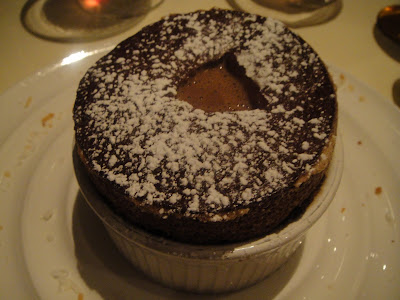 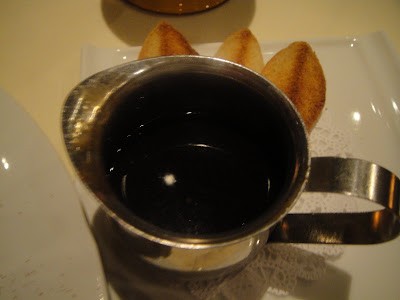 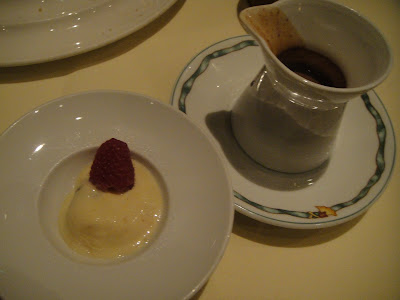 Chocolate souffle with Kirsch ice cream. Chocolate was poured table side which I thought was a nice touch. Kirsch is a fruit brandy, however I did not taste it in this dessert. The souffle was good but a little ordinary. 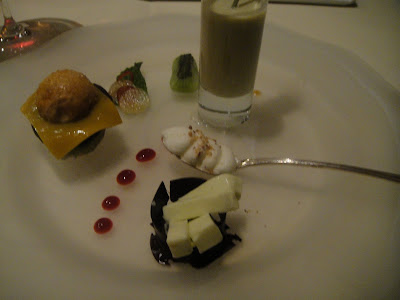 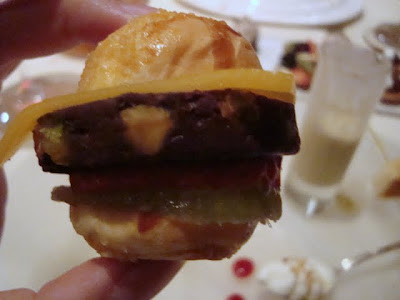 Fleurburger: Faux burger with passion fruit gelee as the cheese, kiwi as the letteuce, chocolate ganache with pistachio as the patty, strawberry as the tomato and a brioche bun, served with a shot of banana milk shake and fennel ice cream in the shape of pomme frites. Wow! Firstly, the colors are beautiful. Secondly, this dessert was so inventive and a playful tribute to the burger which apparently is something that Chef Keller loves (We saw the foie burger earlier, and he has another restaurant in Las Vegas called the Burger Bar). The pomme frite ice cream was delicious, however the milk shake was not memorable. 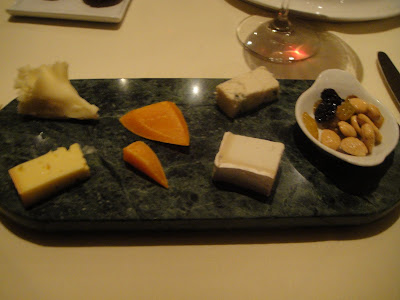 Cheese plate: a variety of French cheeses. served with a side of marcona almonds and olives. The cheese selection was nothing spectacular. 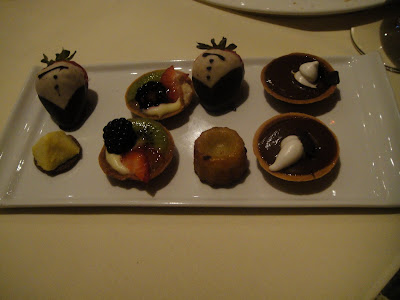 Mignardises that included little tarts and chocolate covered strawberries. At this point, we were too full to even finish this plate.
After observing the drunken display of a young woman at the next table, asking for the most potent absinthe and insisting that Mrs Keller watch her do the shot (which she did), we decided to share one between the three of us.
Absinthe was illegal in the U.S until 2007 because it was thought to cause hallucinations and psychosis. It has a high alcohol content and tastes like licorice. I've had a shot of it in Prague, and recently tried it as a component in a cocktail at a hotel bar. Most brands are green but some are colorless. 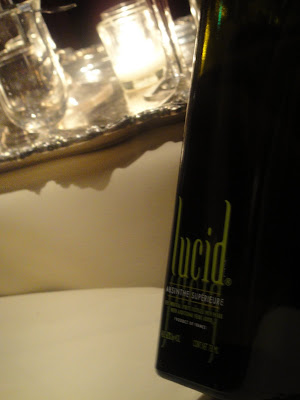 We decided to try the Lucid brand which was one of the first brands that was legally imported into the U.S. The whole distilling process is such a ritual. Our Sommelier wheeled over the cart full of Absinthe paraphernalia. He placed a sugar cube on a slotted spoon on top of a glass of Absinthe. Then he proceeded to pour cold water onto the spoon which dissolves the sugar in the Absinthe. Lastly he lit up the concoction and poured it for three apprehensive guests. 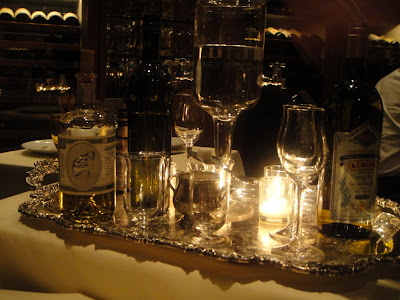 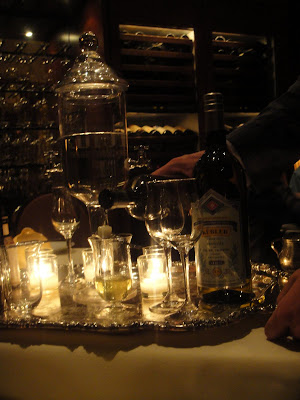 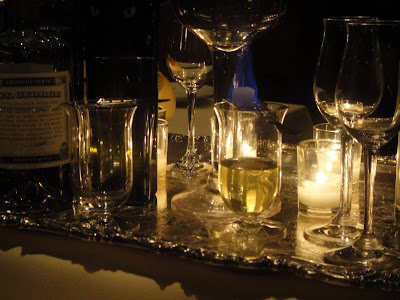 I have to say that I found it extremely strong and repulsive, and was struggling hard to take a few sips. I suppose I do not have the palate for it. However I thought the presentation was lovely. If you have never seen how it's prepared, it can be quite the spectacle.
We left the restaurant highly impressed. With only three courses, it was still an epic meal but not at all boring. Although it did take a while for the bread and our initial cocktails to arrive, the rest of the meal was well paced. The portions were generous and hearty, and the dishes were creative. There was definitely an attention to detail in conception of the dishes as well as in the plating. And to top it off, $120 per person before tip was very reasonable for a three course meal + cocktails + bottle of wine + Absinthe drink at a Michelin Starred restaurant.
The service was also impeccable. The hostess was very bubbly and accommodating when I called to let them know that we were running a half hour late. Our waiter, Stephen was knowledgeable, a little comedic and very attentive. The Sommelier/manager, Marcus did well on the wine selection and worked expertly in distilling the Absinthe. He also called us a town car when we were leaving (at a taxi fare). Chef Keller was not there that evening as he was out of town, but his lovely wife came by at the end of the night to bid us farewell and to thank us for coming.

Maybe it's because I dined at the outpost restaurant but... FdL really didn't deliver on any front when we dined there a few months back. Stupid Vegas restaurants.

Then again, Gary Danko was a bit of a let down as well, so maybe it was me.

Hi SinoSoul, Sorry to hear about your subpar experience. I was expecting a letdown too based on comments/reviews on Yelp and CH, so perhaps my standards were lowered considerably ;-)

While I am really sad that you didn't get to meet my Grandpa (because I've now adopted him, you know) I am glad to hear the you made it to FDL and liked it! I can't wait to make my next wine tasting/San Francisco trip! Sounds like you had a lot of fun, and DELICIOUS food!