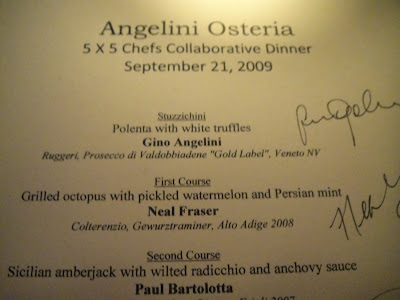 Monday night marked the last dinner of the 2009 5X5 Collaborative series. In each of the dinners, the same five chefs come together at one of their restaurants and each prepare a dish for the night. The chefs include Josiah Citrin (Melisse), David LeFevre (Water Grill), Michael Ciramusti (Providence), Neal Fraser (Grace) and Gino Angelini (Angelini Osteria). I went to the last one at Water Grill and really enjoyed myself. Going in on Monday, I knew that it would be a little different. After all, Water Grill is a fine dining/Michelin starred establishment which menu focuses on seafood. Angelini Osteria on the other hand, is a homey Italian restaurant that serves Italian comfort food. It's been a while since I've had Italian food, which is one of my top favorite cuisines, so I was looking forward to the meal. The price tag for the event was $150; $215 including wine pairing. A portion goes to the Southern California Special Olympics but I was surprised to see that only $25 per person was donated to the cause.

The restaurant is small, intimate and loud, and there were already a lot of diners by the time we arrived at 6.30pm on a Monday. 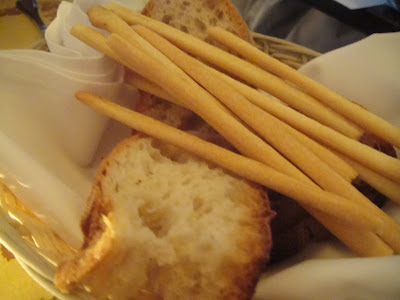 Basket of bread including bread sticks that were delicious. I asked for balsamic vinegar, waited over 10 minutes for it before asking again. There appeared to be a shortage of waiters as ours was bustling around and rattling off menu items before speeding off.

While scanning the menu, the 1st course already drew a smile to my face. Polenta with the highly-sought-after white truffles. Italian food can sometimes include very casual dishes, but the truffles would elevate this. 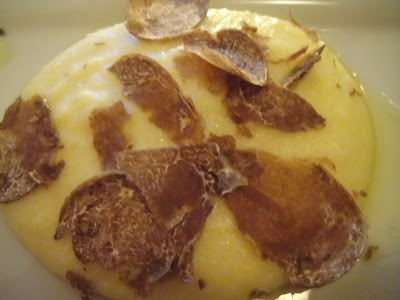 This was actually a stuzzichini. The polenta was gummy, like it wasn't stirred enough or it had been sitting out for some time. On a positive side, at least the flavor was good and there was a generous serving of shaved truffles. The prosecco was good as well.

It's interesting that Chef Angelini had allowed these plates of gummy polenta to be served since he is a highly regarded Italian chef and this was his restaurant that we were dining at. 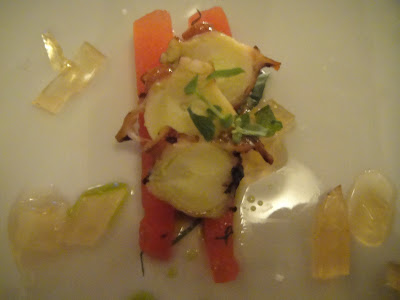 The octopus was rubbery, and once again I suspect that it had been sitting out as well because it wasn't warm and did not seem as though it had just come off the grill. Also when they describe the watermelon as pickled, I was expecting some strong flavors. Instead it tasted just like a normal watermelon slice. The Riesling gelee was interesting: it had a strong aftertaste. Another complaint I had was that the wine was not chilled enough. I swear it was just a few degrees cooler than room temperature. Ugh. There's nothing worse than lukewarm white wine. 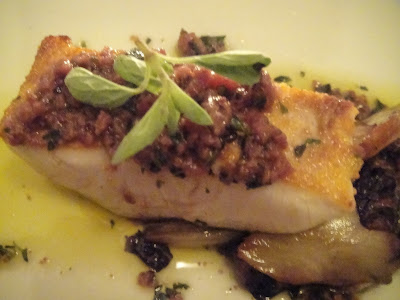 The fish was dry and just overall boring, and the radicchio was horrendous. It was too bitter that I wasn't even able to finish a bite. Yes, I know the vegetable is bitter by nature, but I doubt the chef meant for it to be THAT bitter because it was absolutely inedible. I thought the anchovies made the dish. It was a bit clumpy and pasty and some may complain that it's too salty, but I thought it gave at least some flavor to the fish.

At this point, three courses were done and they were all mediocre. I was a little disappointed. I recalled that at the 5X5 dinner at Water Grill, almost every plate that came out was exquisite and interesting. Also our waiter at Angelini Osteria did not even know anything about guest chef Bartolotta when we asked and did not know what restaurant the chef worked in. This was an extremely different experience from the Water Grill, where our waiter knew the background of each of the chefs and was also knowledgeable about the food and wine. 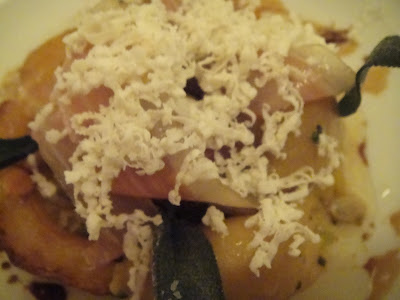 Ahh... this course saved the night. The pasta which is a form of ravioli, was excellent and by far the best plate of the night. It was served with figs and squash. The squash was deliciously coated with sage butter sauce, the sage was aromatic and even the fried sage leaf was lovely. There was also guanciale or unsmoked Italian bacon. It was cured and had an intense pork flavor. It was also chewy and was a nice textural contrast to the smooth and creamy pasta. 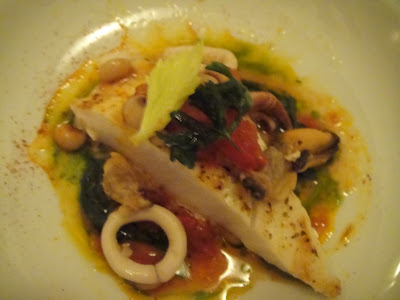 This dish was uninspired and was served lukewarm. Although it was flavorful, there was nothing unique about this dish. I have tasted Michael Ciramusti's cooking on various occasions and he has never disappointed. I know that he is an amazing chef so I am left to believe that any missteps had to be due to the logistics of the kitchen. Since it is a small kitchen, perhaps they had to prepare many components beforehand instead of firing up the grill when order was up. This just seem like a dish that you could get at any other restaurant. 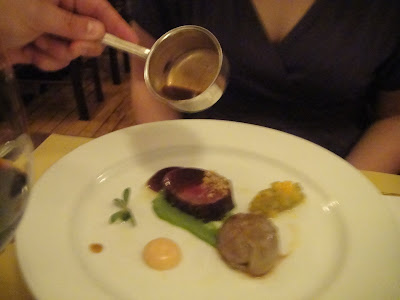 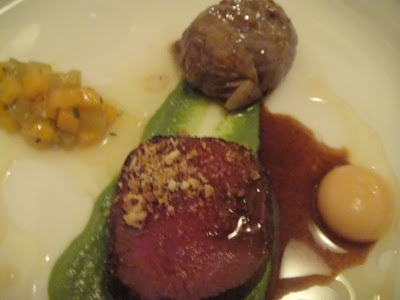 The waiter poured the sauce table side which was a nice touch. The venison was cooked perfectly and the eggplant with foie was delicious. I asked the waiter if that was a quail egg yolk on the plate and he said yes. It was not. It was a pseudo quail egg in the form of peach gelee. He obviously did not know what was on the plate. Despite the error in service, I did think that the food was delicious, the presentation was lovely, and the peach gelee was playful. 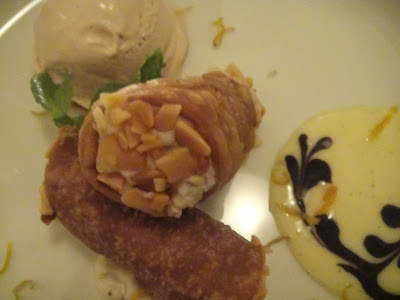 Hmm.. no palate cleanser? Oh well..
The dessert was served with a little citrus zest which was refreshing. The cannoli was delicious and I loved the ice cream which tasted like ferrero rocher. And vaniglia is exactly what you think it is: vanilla.

The wine pairing was good but most of the food was nothing special. And the service was appalling. Our waiter was a nice person, but I felt that he did not know what was going on. He did not know anything about the guest chef nor ingredients on the plate. I feel that these are the type of information that should be covered in a staff briefing before the night started. I also felt that the service was not attentive when compared to our lovely waiter at the Water Grill. One of the servers plopped a dish in front of me and then walked away, without even telling us what it was. Presenting a plate is customary in a reputable restaurant that is serving a tasting menu.

Call me an elitist, but if I'm paying $215 sans tax and tip, I expect a special dining experience, with more thoughtful service. At the last 5X5, all the chefs came out to talk to every table when their courses were served. This time, we barely saw two making their rounds. The chefs are supposed to come out to present their dishes. Instead, the waiter (who didn't even know what was on the plate and was frantically looking through his hand written notes) did it, if at all. I suppose it was a blessing in disguise that the only chef that came to our table was Chef Lefevre, and we raved about his pasta dish. I don't know what I would have said if some of the other chefs had come over to ask how things were. Is it rude to say "Your dish was ordinary"? I suppose I was expecting more exuberance in their cooking since it was the last one of the series. Instead, I did not feel much heart and soul in the food that was served.

I felt a bit cheated with this experience. A large part of a memorable dining experience is the service and feeling welcomed as a diner. I did not feel that way at all, given that this was a fairly extravagant event. The service was similar to that at a regular restaurant and I felt they were trying to herd customers out of the restaurant like cattle. It was a less than 2 hr dinner even including waiting the first 30 minutes for the 1st plate to arrive. So essentially, we had 7 courses in almost 1.5 hrs. There was nothing special to the night and most of the food was not exciting at all. Please guys, it's for charity (well, $25 of it is) - can you at least put a little more effort into the meal? I left the restaurant almost $300 poorer and unimpressed.

Hits: pasta, wine pairing, venison, dessert
Misses: service, many of the dishes were not warm, seafood a bit overcooked (perhaps b/c they not served immediately), bitter radicchio
Rate: **

yeah it was disappointing. Such amazing chefs, not sure why it was so blah...